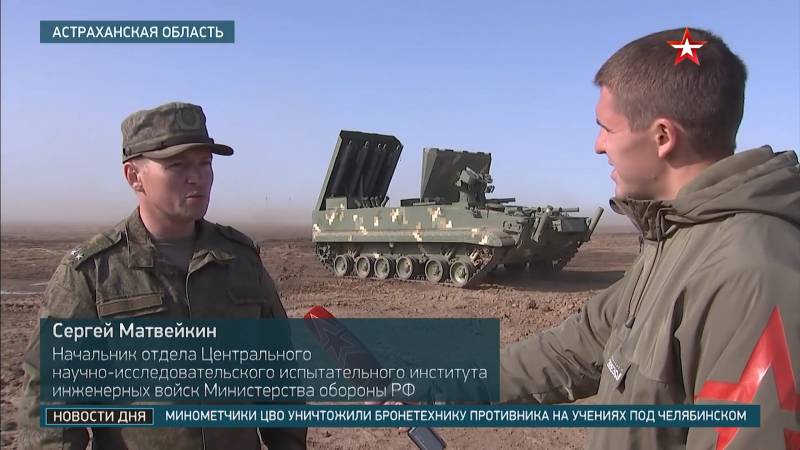 A promising self-propelled demining unit using an elongated charge with a rocket engine, the UR-15 "Meteor", has been developed and launched for testing. An experimental vehicle of this type is involved in the Caucasus-2020 exercises - it must show its capabilities in a real situation. After completing all the necessary checks, the installation will be able to enter service and replace the well-known UR-77 Meteorite model.

On the way to "Meteor"

The development of new demining installations to replace the UR-77 started a long time ago. At the end of the 93s, at various exhibitions, UR-07 and UR-3 (M) "Re-sorting" products were demonstrated, made on the modified BMP-07 chassis. UR-XNUMX even managed to go into trial operation, but the matter did not progress further.

In June 2018, the Ministry of Defense announced a tender for research and development work on a promising mine clearance facility. R&D worth 75,4 million rubles. should have been completed by November 10 of the same year and submitted a preliminary design of the engineering machine. At the same time, the UR-15 index and the Meteor code became known for the first time. 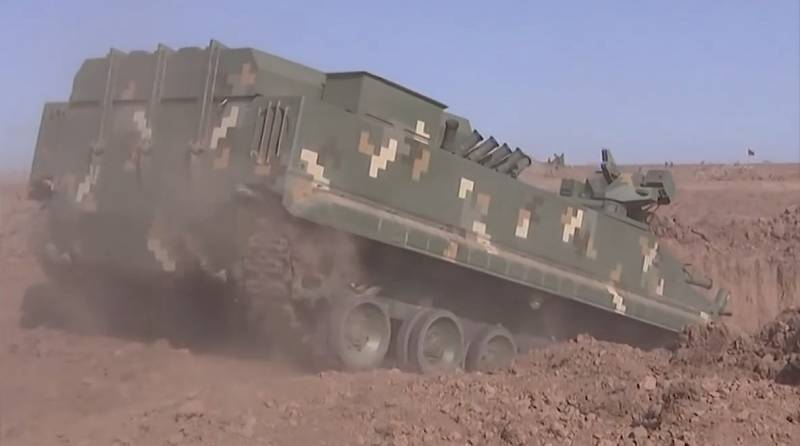 UR-15 overcomes an obstacle
It was also reported that the Tekhmash concern will develop a new extended demining charge. The product with the code "Razrez" was supposed to replace the existing charges UZP-77 and UZP-83 used by serial installations.

For some time, there were no new reports on the progress of work on the "Meteor" and "Razrez". The situation has changed only now, and we are talking about the transition of the project to a new major stage.

On September 21, 2020, the Zvezda TV channel, in a report from the Caucasus-2020 exercise, first showed a prototype UR-15 and disclosed some data about this product. Provides basic technical information. They also showed some procedures for preparing for combat work. The launch of the extended charge has not yet hit the frame.

Testing "Meteor" in the framework of the exercise is carried out at one of the ranges of the Astrakhan region. In conditions as close as possible to real ones, the prototype will have to clear passages in minefields and demonstrate its other advantages. 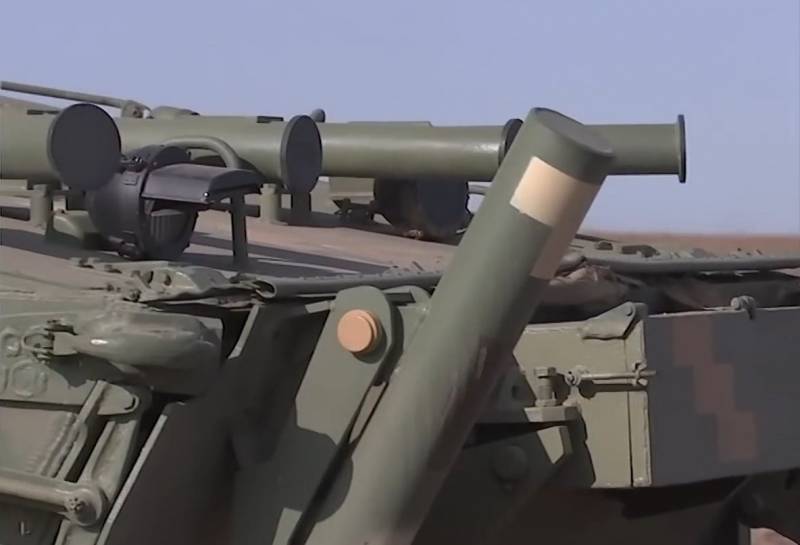 Electromagnetic trawl and KAZ elements in the bow of the vehicle

The UR-15 was built on the basis of the BMP-3, which was well mastered by the troops. In this case, only the body, which has undergone a serious revision, and the chassis are used. The combat and airborne compartments were removed, and the power plant and command compartment were seriously rebuilt. Finally, targeted equipment has been added, taking up a significant portion of the released volumes.

The Meteor chassis has received an electric transmission. The diesel is connected to a generator that feeds the traction motors. Batteries are also available to make it possible to drive without a diesel engine. The range on batteries is 3 km. Despite the radical restructuring of the power plant, the UR-15 can show high running and dynamic characteristics.

The vehicle retains an aluminum-steel armored body that protects against small-caliber artillery from the front angles. At the same time, new means of protection of various kinds have been added. On the lower frontal sheet, there are two electromagnetic attachments EMT for protection against mines with magnetic target sensors. On the upper frontal part and on the roof of the hull, characteristic tubes appeared - probably these are the launching devices of the Afghanit active protection complex. On the sides of the hull, on the sides of the launcher, there are two blocks of smoke grenade launchers. 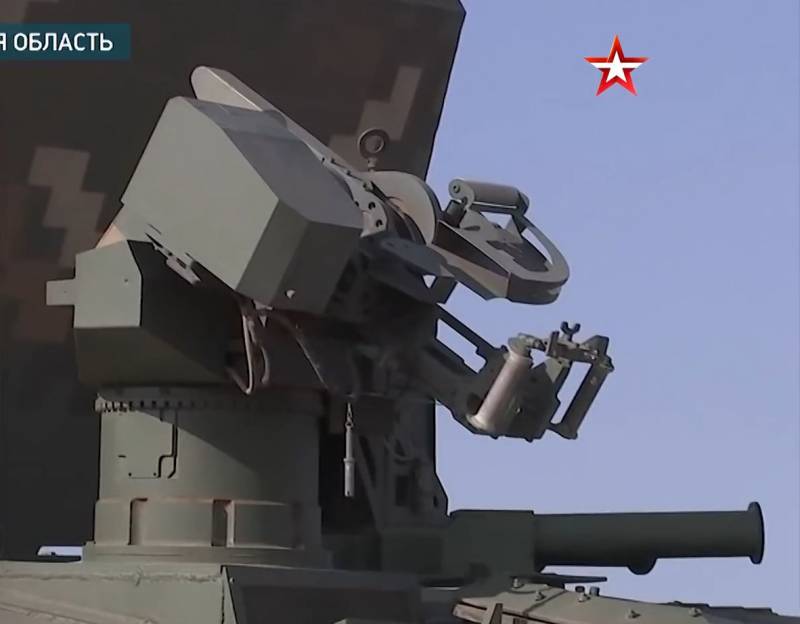 Active module - without machine gun and ammunition box
For self-defense, the UR-15 also carries a remotely controlled weapon station. It is located on the roof of the hull above the control compartment and can be equipped with a PKT machine gun. The shown experienced "Meteor" for unknown reasons does not have a machine gun.

The central and aft parts of the UR-15 hull are allocated for targeted equipment. They have a large compartment for storing extended charges. Judging by the design of the launcher, the vehicle carries 5 such products. In the transport position, the volume for charges is covered by a lifting front cover and the actual launcher.

The launch of the elongated charge is carried out using a solid-propellant rocket launched from an inclined guide. Guides for five missiles are mounted on a swinging part with an armored casing. Horizontal guidance is carried out by turning the entire machine; elevation angle controlled hydraulically

The performance characteristics of the new Meteor installation have not yet been specified. Both the exact weight and size or running parameters, and the characteristics of the rocket system, incl. extended charges. However, even the available data allows us to draw some conclusions about the advantages and prospects of the product. 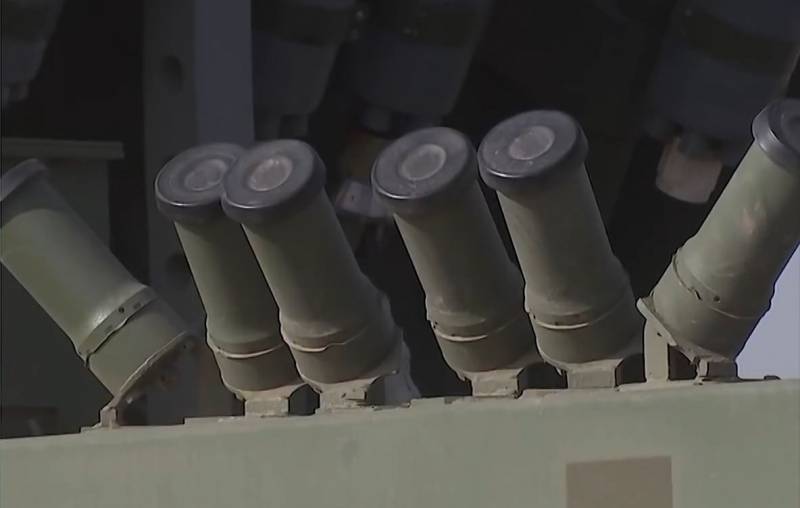 First of all, you need to pay attention to the original chassis. It is based on the BMP-3 and has an unusual power plant. Due to this base, the UR-15 has significant advantages over the serial UR-77. The main thing is unification with modern samples of army equipment. In addition, "Meteor" is superior to the UR-77 in terms of protection, both due to the design of the armored hull and due to additional means.

The proposed electric transmission with the possibility of energy storage is of great interest. Such systems allow obtaining sufficiently high driving characteristics, and also differ in the presence of additional functions. Thus, the UR-15, unlike the Meteorite or the BMP-3, can move almost silently for some time. This makes it easier to enter the position without attracting the enemy's attention.

"Meteor" carries five missiles with extended charges - against two on the UR-77. Thus, the new SPG can clear more lanes or make a longer pass without reloading. The type of extended charge used is unknown. It is quite possible that a promising charge with improved characteristics was developed for the new engineering vehicle - which will give new advantages over the available equipment. 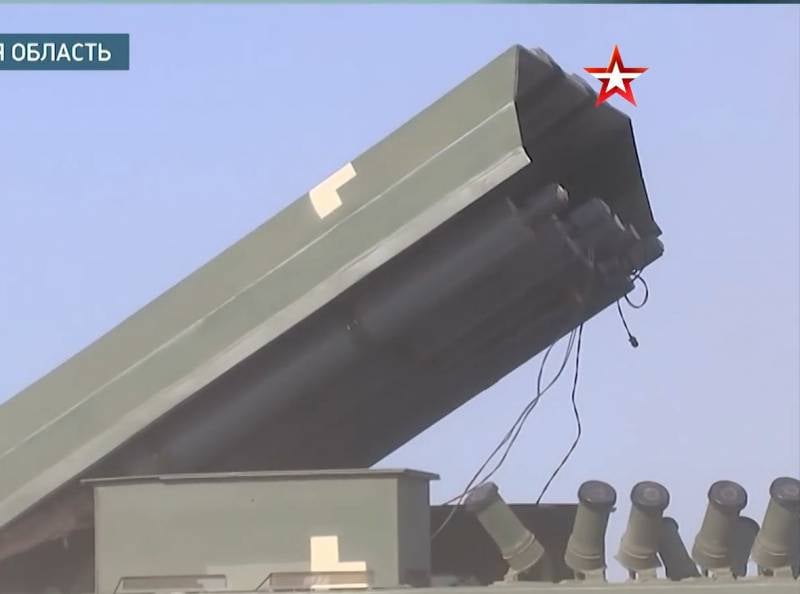 Launcher with rockets for ejection of elongated charges

It should be noted that the UR-15 project, with all its advantages, has a number of weaknesses that can affect its results. A promising engineering vehicle uses a fundamentally new power plant, and a new launcher with a new extended charge is also used. Probably modern means of shooting control were used. All of these components need full-scale testing, refinement and refinement.

It cannot be ruled out that certain components of the Meteor will turn out to be overly complex or show some fatal flaws. This can lead to the need for a significant rework of the project or to complete abandonment of it. How long work on improving the design will continue and what will lead to is unknown.

However, so far the situation is conducive to optimism. Apparently, the UR-15 installation has by now passed factory tests, and according to their results, it was allowed to be tested within the framework of real military exercises. It is unlikely that an unsuccessful sample with a mass of fundamental flaws would be sent to maneuvers.

Thus, in the next few years, after the completion of all the necessary measures, the Russian engineering troops can receive a promising demining installation with a number of important features. This will allow starting the process of replacing existing samples, which are of considerable age. In this case, we will talk not only about updating the fleet, but also about increasing the efficiency of use. How soon all this will happen will become known later.