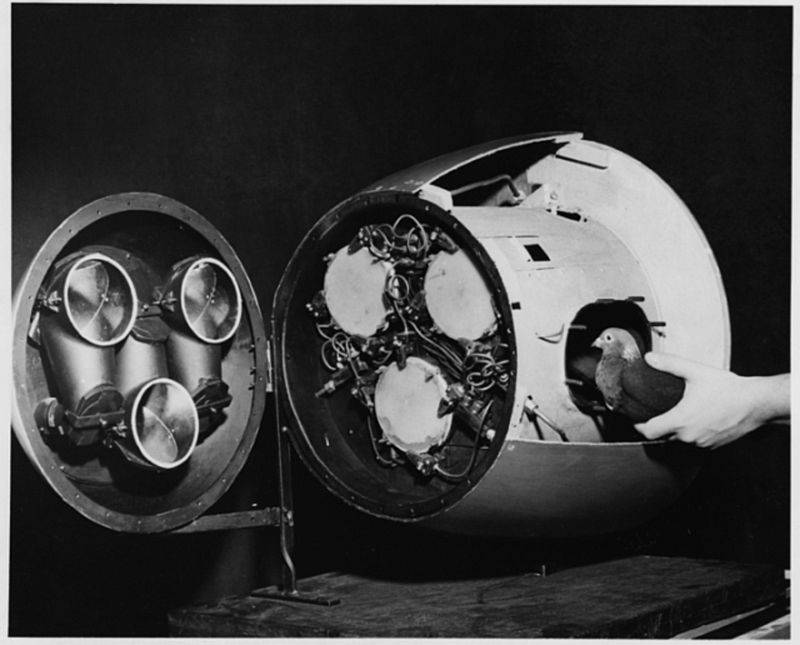 Model of the nose cone, created as part of the "Dove" project

Carrier pigeons were actively used during the First and Second World War. The use of pigeons as winged messengers has a millennium history, this use of birds was known even in the army of Alexander the Great. However, during the Second World War, the United States decided to go much further. The behavioral psychologist Burres Frederick Skinner has proposed a completely new way of using pigeons. The research project developed with his participation turned out to be so unusual that it is still included in various ratings of the strangest military inventions in human history.

The emergence of the project "Dove"

It is not known whether American engineers and scientists studied Slavic legends and traditions, but the first description of the military use of pigeons can be found in our history. According to Slavic legend, Princess Olga's revenge against the Drevlyans consisted of four events. During the latter, the Kiev army under the leadership of Princess Olga besieged Iskorosten for more than a year, but was never able to take the city, whose defenders believed that they would not be spared. Realizing that the city could not be taken, the princess sent her ambassadors with an offer to pay tribute, which consisted in the issuance of three pigeons and three sparrows from each court. She substantiated such an unusual request by the fact that she had previously fully avenged the death of her husband Prince Igor and would like to establish a smaller tribute in order to improve relations with the Drevlyans.

The tribute was collected and paid, after which at night the warriors of Princess Olga tied a tinder to each bird and set it on fire, setting the birds free. The pigeons and sparrows returned back to the city, where numerous fires began, after which the defenders were forced to surrender. Domestic historians are still arguing among themselves about whether this story had at least some basis. One thing is certain: even if the plot of the story was completely fictional and later included in the annals, its creators knew enough about pigeons. The pigeon is rightly considered one of the most intelligent birds with a good memory and developed natural navigation. Pigeons remember the area well and always return home. All this in due time led to the widespread distribution of carrier pigeons. 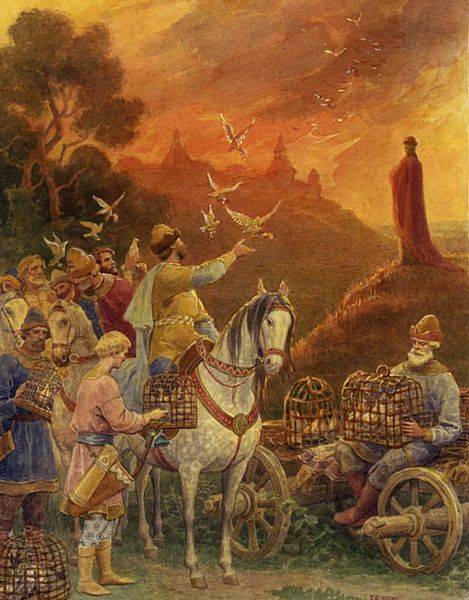 Giving an account of the pigeon's abilities, during the war years in the United States, they thought about using a bird with excellent navigation abilities as a living homing head for guided munitions. In those years, even a country as well developed as the United States could not afford to solve this problem at an affordable technical level. Before creating a high-precision weapons and homing shells, missiles and bombs were still far away. But there was plenty of biological material at hand. It was in such an environment in the early 1940s that the project was born to create guided weapons equipped with biological targeting systems.

An unusual research project was carried out in the United States under two programs. The first, which existed from 1940 to 1944, was called "Dove". The second, developed from 1948 to 1953, was called "Orcon". "Orcon" - short for Organic Withtrol (organic control). The well-known behavioral psychologist Frederic Skinner, Berres, who is considered one of the most influential psychologists of the XNUMXth century, has a hand in these projects. In addition to psychology, Skinner became famous as an inventor and writer.

The projects developed with his direct participation were aimed at creating guided weapons with a biological targeting system. The carrier pigeon became the basis of this biological guidance system. The projects have received government funding from the United States Office for Scientific Research. The general private contractor for the work was General Mills. At the same time, the "Dove" project itself was originally part of a more extensive federal research program for the creation of various guided weapons systems and the combat use of various warm-blooded animals and birds (rocket, aviation, torpedo and other weapons). 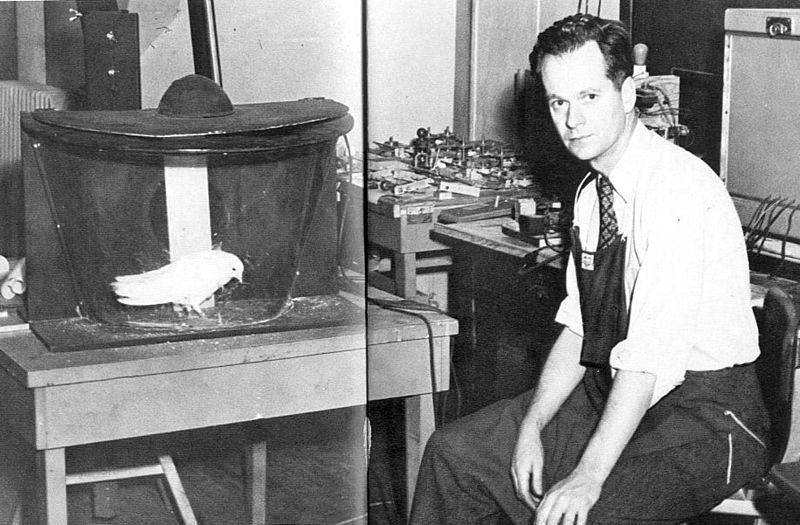 Implementation of the "Dove" project

It was no coincidence that Skinner came up with the idea of ​​using pigeons as living homing heads. No matter how strange his idea may look, one must understand that in those years there was simply no talk of any computer systems, advanced electronics and GPS. It is also important that this work of the psychologist has become a logical continuation of his earlier research. Berres Frederick Skinner has worked with a variety of animals since the 1930s. Despite the skepticism of many military personnel, Skinner received $ 25 from the state for his research.

In a way, it was the American academician Pavlov. Only instead of dogs he worked with pigeons and rats. In the laboratory of a psychologist and physiologist, it was always possible to find a large number of different devices, for example, boxes with contacts, bulbs and feeders, which worked in an automatic mode and were intended for experiments and the study of animal reflexes. During the Second World War, Skinner was simply struck by the idea of ​​using the minimal intelligence of pigeons, or rather, reflexes developed in birds, in control systems for precision weapons. The scientist really believed in the possibility that carrier pigeons could take a guided munition, for example, a gliding bomb, to a target with a deviation of within six meters. Actually, all the tests he conducted only emphasized the possibility of such an approach.

Homing pigeons were chosen for the experiment for several reasons. Firstly, it was a light bird, secondly, the pigeons easily adapted and trained, and thirdly, carrier pigeons were well distributed and readily available. The pigeons themselves were placed in the bow of the ammunition. For aiming at the target, one or three pigeons could be used, which were placed in special "jackets", or holders that securely fixed the birds, leaving only the head free for movement. 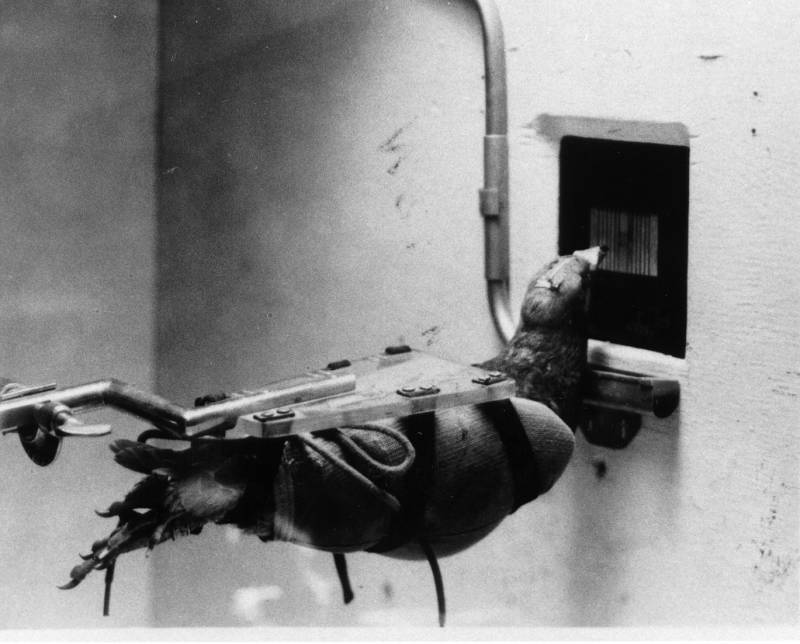 The process of training a live homing head
A matte screen was placed in front of each pigeon, onto which an image of the terrain, broadcast from the nose of the bomb, was projected using a complex lens system. As the developers of the project believed, each pigeon will peck at the screen, equipped with special electrical contacts, keeping the "sight" on the target. The pigeons learned this behavior during training. The birds simply developed a reflex, using real aerial photographs of the terrain or silhouettes of the necessary objects or warships for their training. The birds developed a reflex to peck at a screen installed in front of them, on which they saw the desired object. Each such peck sent signals to the servos of the gliding bomb or missile controls, adjusting the trajectory of the ammunition. The training of birds itself was based on a simple reward for the actions the trainer needed. Various seeds or grains of corn were used as top dressing.

One or three pigeons could be used in the ammunition control system. Three pigeons improved targeting accuracy. Here, in practice, the democratic principle was implemented, when a decision was made by a majority vote. The steering wheels of a gliding bomb or missile were deflected only if at least two out of three pigeons made a close decision with a peck on the target on the progenitor of the modern touchscreen.

Experiments have shown that carrier pigeons can track a target for at least 80 seconds, while making up to four pecks per second at a target visible on the screen. Research already carried out in the early 1950s as part of the Orcon project showed that pigeons were able to correct the flight of an anti-ship missile flying at a speed of about 400 miles per hour. According to some reports, pigeons were able to hold the target image in front of them in at least 55,3% of launches. At the same time, such a guidance system had a clear and obvious disadvantage: it could only be used in the daytime with good visibility.

The fate of the projects "Dove" and "Orcon"

Despite the positive results of training pigeons and the creation of samples of the guidance system and mock-ups, the "Dove" project was never brought to fruition. Many rightly considered the idea impractical, and some were frankly insane. As the researcher himself later said: "Our problem was that we were not taken seriously." The program was completely curtailed on October 8, 1944. The military decided to end the program and its funding, redirecting forces to other "promising" projects. 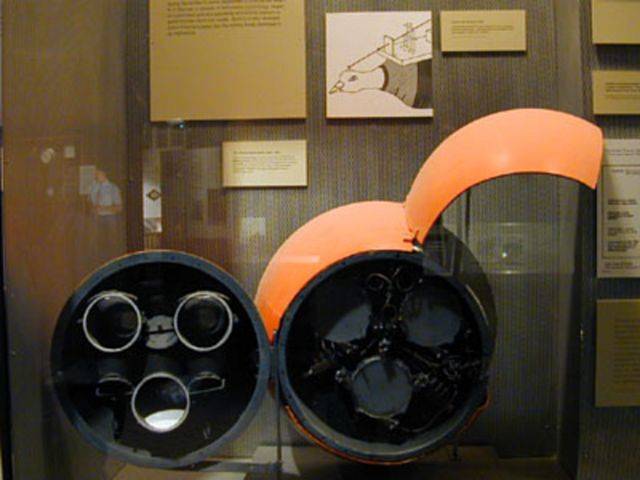 Model of the nose cone created by Project Dove at the National Museum of American History
Most of all in this story, carrier pigeons were lucky, from which real kamikaze were prepared. All birds were lucky enough to survive. Skinner took 24 trained and trained birds to his home.

For the second time, the United States returned to the project to create a biological guidance system after the end of World War II. The project called "Orcon" was worked out from 1948 to 1953. This time it was initiated by the US Navy. The program was finally curtailed in 1953: by that time, the first electronic and electromechanical ammunition control systems had reached the required level of perfection and proved their effectiveness.

Ctrl Enter
Noticed oshЫbku Highlight text and press. Ctrl + Enter
We are
Missile attack on Europe: myth or reality?An-12 in Afghanistan
25 comments
Information
Dear reader, to leave comments on the publication, you must to register.