Preparing to escalate the conflict under the cover of Ukrainian S-300s. Unusual British Air Force maneuvers on the western approaches to Crimea 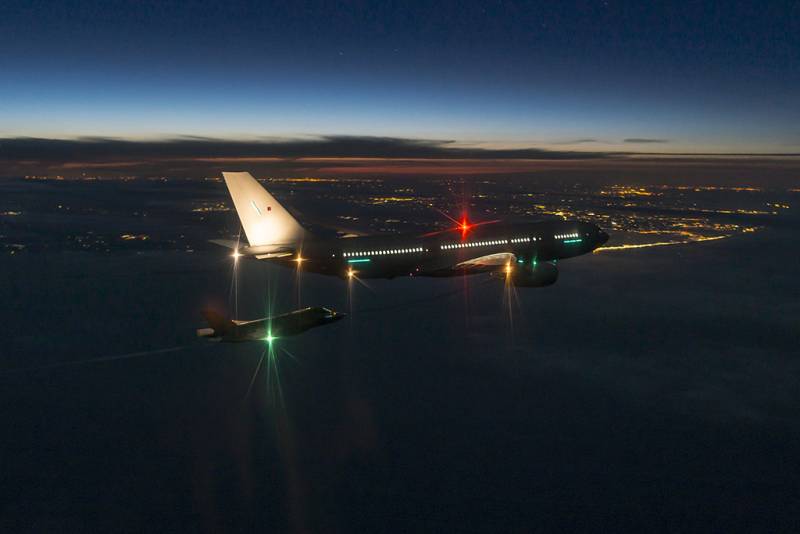 While journalists and observers of numerous domestic military analytical portals and Telegram channels do not cease to exaggerate the information about regular "interceptions", escorting, and sometimes forced successful ouster by Su-30SM / 35 multipurpose fighters and MiG interceptors. -31BM strategic missile carriers B-1B "Lancer" and B-52H "Stratofortress" of the 8th Air Army of the US Air Force Global Strike Command from the northwestern, western, southwestern and northeastern air borders of Russia in the Arctic, Baltic and Black Sea conditional theaters of military operations, where data that are more significant for expert analysis are continuously flowing from the online portals for monitoring regional and global air traffic "PlaneRadar.ru" and "Flightradar24".


On September 15 and 16, 2020, regular observers of the above portals, as well as a number of spotters, drew attention to the unusually high activity of tactical multipurpose, reconnaissance and auxiliary aviation Royal Air Force of Great Britain (fighters EF-2000 "Typhoon", strategic electronic reconnaissance aircraft and AWACS RC-135W Block 8 "Rivet Joint" and E-3D "Sentry", as well as multipurpose air tanker "Voyager KC3") with simultaneous refueling in air in close proximity to the airspace "Square" over the Odessa region. At the same time, the long-term practice of carrying out ordinary reconnaissance flights of British and American Rivet Joints, Sentry and Poseidons near the southern air lines of the Russian Federation over the Crimea either does not provide for air refueling at all (due to the proximity of the air bases of the permanent deployment of Sigonella and Waddington), or provides for its implementation in the event of a sudden appearance of the need to prolong the reconnaissance operation, when the fuel reserve in the fuel systems of these vehicles is practically exhausted and ensures only return to the home airfields.

Moreover, in the course of regular reconnaissance operations near the Crimean zone A2 / AD, the process of in-air refueling of Rivet Joints and Poseidons of the US Air Force and Great Britain was traditionally (according to the data of the PlaneRadar.ru and Flightradar24 portals) carried out on direct routes , running over the southern part of the Black Sea, but not in any way during loitering along the ring route near the airspace of Ukraine over the Odessa region.

The Royal Air Force of Great Britain and the United States Air Force are considering the possibility of using tactical and reconnaissance aircraft in the Black Sea theater of operations in the conditions of disabling key jump airfields in Romania and Poland. The role of the Ukrainian S-300PS

Here, involuntarily, one wonders: what hidden operational-tactical and operational-strategic nuances, beyond the control of ordinary observers, newsmen and bloggers, forced the command of the Royal Air Force of Great Britain as a whole and the crews of the Voyager KC3, RC-135W "Rivet Joint" and E- 3D "Sentry", in particular, to start practicing refueling in the air, firstly, without any obvious justification, and secondly, in such a non-standard area of ​​the Black Sea conventional theater of military operations?

On the one hand, against the backdrop of information that has recently leaked into the Western European and Ukrainian media about the assignment of software and hardware adaptation of ground-based air communication systems, automated control systems for anti-aircraft missile brigades (ACS) and combat control points for anti-aircraft missile divisions (PBU ZRDN) for use in network-centric air defense systems of the NATO countries (possibly by equipping with Link-16 terminals with appropriate decoders and software protocols), as well as in preparation for the operational-tactical exercises "Joint Efforts 2020" with the final landing at the range near N of the item. Kapustino (Mykolaiv region) hundreds of servicemen of the 16th Airborne Assault Brigade of the British Army from the cargo compartments of several military transport aircraft C-130J selection of such an "exotic" sector of airspace for refueling the reconnaissance board RC-135W Block 8, "air radar" E-3D and Typhoon units (the latter operated with turned off transponders and are not displayed on the PlaneRadar.ru map) does not cause much surprise. Why?

It is obvious that, according to the plan of the exercise, it was the Typhoon flight crews who were supposed to provide cover for the unit of the 16th Airborne Assault Brigade landing by the Hercules, receiving comprehensive information about the ground / surface / air operational and tactical situation in the conditional theater of operations from "Rivet Joints" and AWACS over secure radio channels of the network-centric data exchange network "Link-16". 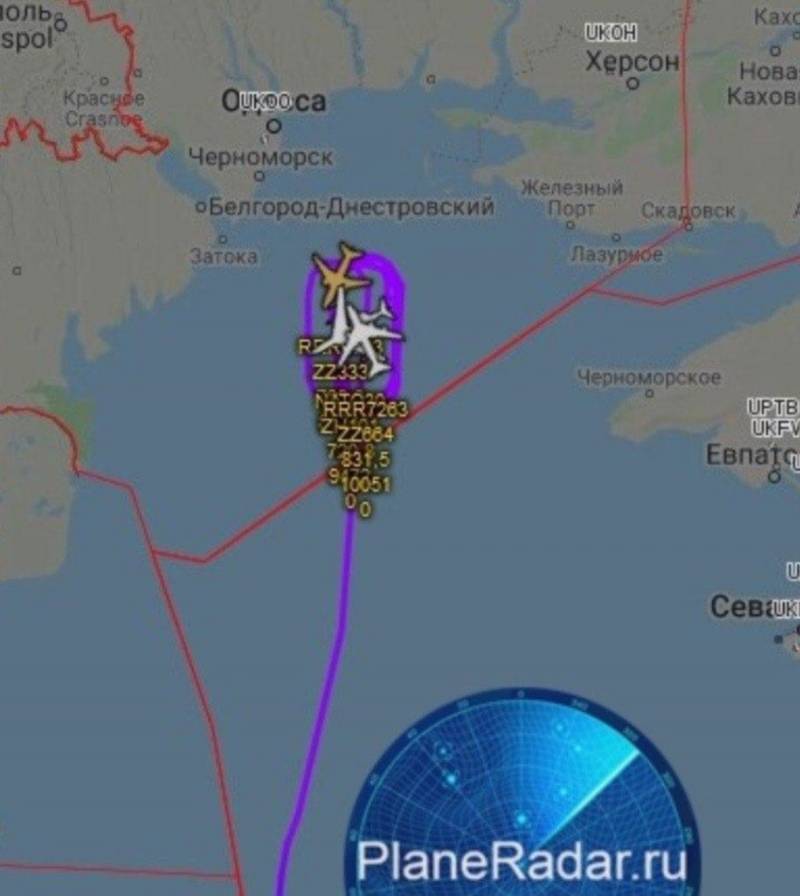 The moment of loitering and refueling of tactical and reconnaissance aircraft of the British Air Force from the air tanker Voyager KC3
On the other hand, the choice of this sector of airspace for refueling training has a much more compelling justification, directly related to the likely escalation of a regional military conflict between the Russian Armed Forces and the NATO Joint Forces throughout the entire Azov-Black Sea conventional theater of operations.

In this situation, the crews of the EF-2000 "Typhoon" multipurpose fighters and the F-35B stealth fighters of the British Air Force, as well as the pilots of the F-15E "Strike Eagle" tactical fighters, the stealth F-22A, the RB EA-18G "Growler" aircraft and the B missile carriers -1B "Lancer" will need a continuous stream of comprehensive information about the frequency modes of operation of AWACS radars, surveillance radars and illumination / guidance radars of S-300V4 / 400 anti-aircraft missile systems, etc., deployed on the territory of the Republic of Crimea, as well as airborne Radar stations of multipurpose fighters Su-30SM / 1/2, Su-35S, interceptors MiG-31BM and active radar seeker of medium / long-range air combat missiles RVV-SD and R-37M, which ultimately can facilitate the process modeling of frequency-targeted active noise interference to counter our anti-aircraft / anti-missile "umbrella" A2 / AD, formed over the Crimea and Krasnodar Territory.

To implement such a scenario in the vision of "hot heads" from the Pentagon and the British Defense Department, the RC-135W "Rivet Joint" strategic radio and electronic reconnaissance aircraft and EA-18G electronic warfare aircraft equipped with AEELS multi-band RTR complexes and AN / ALQ-246 NGJ electronic warfare systems will have to perform much longer missions on the distant approaches to the Southern Military District, which will entail the need to carry out multiple refueling in the air, because in the conditions of a large-scale conflict, the runways of such jump airfields as Mikhail Kogalniceanu (Romania) and Redzikovo (Poland) (could be used for servicing and refueling vehicles) with a 100% probability will be disabled by massive strikes of our Iskander-M OTBR.

As for the development of air refueling 45 km from the Odessa region, in this decision of the command of the Royal Air Force of Great Britain one can see nothing more than modeling a hypothetical cover for refueling Typhoons and Rivet Joints (at this moment the most vulnerable to fighter aircraft of the VKS Russia) under the anti-missile "dome" of the S-300PS anti-aircraft missile system attached to the 160th Odessa Anti-Aircraft Missile Brigade and having an interception radius of about 90 km. But our British "friends" did not take into account the fact that a "weighty" outfit of 6 Kh-32P / PD "Krypton" anti-radar missiles launched by two links would be quite enough to disable the 31-channel "30" of the early version multifunctional fighters Su-XNUMXSM.

Ctrl Enter
Noticed oshЫbku Highlight text and press. Ctrl + Enter
We are
MiG-31BM over Syria - "pill from mistakes" of the Air Force coalitionSituational analysis of the death of the MH17 flight (Malaysian Boeing 777), made on the basis of engineering analysis from 15.08.2014
60 comments
Information
Dear reader, to leave comments on the publication, you must to register.