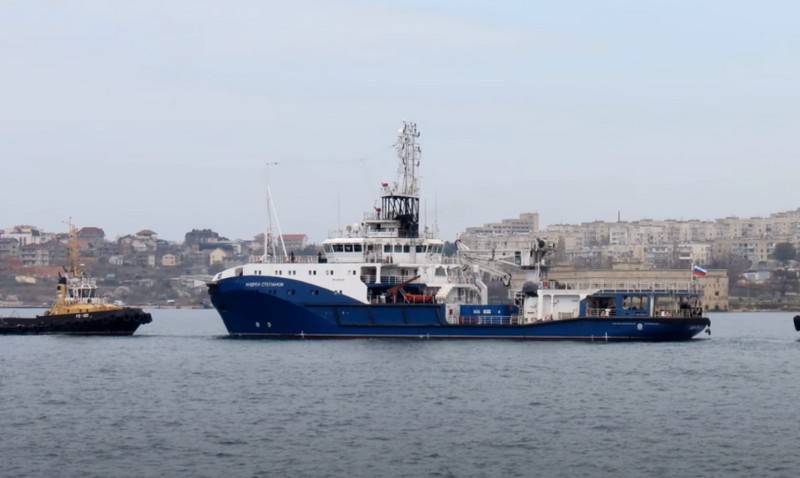 Sea tug of project 23470 "Andrey Stepanov", making an inter-fleet passage from Sevastopol to Kamchatka, crossed the Northern Sea Route. The press service of the Pacific fleet.


As noted, Andrey Stepanov crossed the Northern Sea Route in tow. At present, he continues the transition, heading for Petropavlovsk-Kamchatsky, where the ceremony of joining the tug into the detachment of support vessels for the troops and forces of the Pacific Fleet will take place.


The modern sea tug of project 23470 "Andrey Stepanov", built specially for the Pacific Fleet, continues its transition from Sevastopol to Kamchatka, where it will become part of a detachment of support vessels for troops and forces in the North-East of Russia. The towing of the vessel along the Northern Sea Route has already been completed. Arrival of the tug to Petropavlovsk-Kamchatsky is scheduled for the end of this week
- said in a statement.

The fact that the tugboat "Andrey Stepanov" had completed its sea trials at the factory and was preparing for the inter-fleet passage to Kamchatka from Sevastopol was reported back in the 20th of June this year. At the same time, the press service of the Pacific Fleet announced that the transfer of the tug would be carried out along the Northern Sea Route.

Ctrl Enter
Noticed oshЫbku Highlight text and press. Ctrl + Enter
We are
Sea tug of project 23470 Andrey Stepanov will leave for KamchatkaThe first serial marine tug of project 23470 went on sea trials
16 comments
Information
Dear reader, to leave comments on the publication, you must to register.