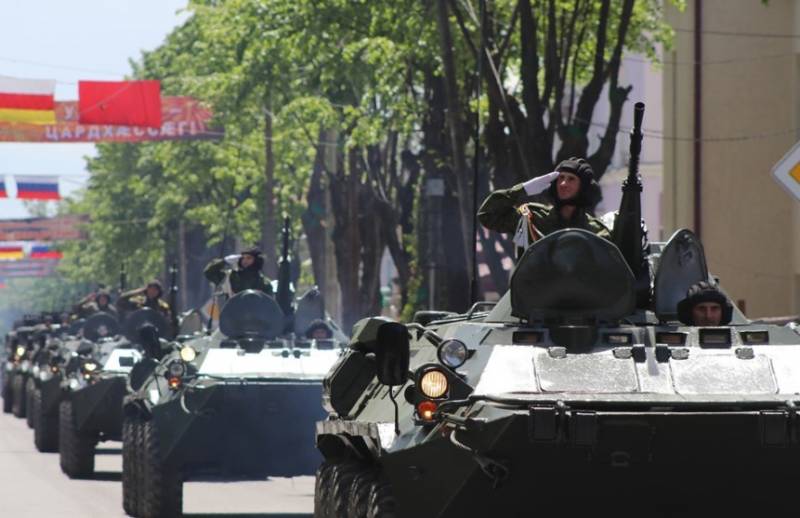 Celebrations and a military parade in honor of the 30th anniversary of the founding of the Republic of South Ossetia (RSO) were held today in the city of Tskhinval. Together with South Ossetian and Abkhazian military units, servicemen of the Russian Federation took part in the parade.


The republican state news agency "Res" informs about it.

According to the press service of the RF Ministry of Defense, about 20 units of Russian equipment, including the Grad MLRS, KamAZ vehicles with towed guns and the BTR-80, passed through Teatralnaya Square as part of the parade column. The parade crews of the RF military personnel numbered about 160 people. Musical accompaniment was provided by a military orchestra, which performed together with their South Ossetian counterparts.

Numerous guests from Russia, including a delegation from North Ossetia, arrived to participate in the solemn events. The holiday was attended by representatives of Abkhazia, as well as the Donetsk and Lugansk People's Republics.

Exactly 30 years ago, on September 20, 1990, by the decision of the Regional Council of People's Deputies, the South Ossetian Autonomous Region of the Georgian SSR was transformed into the Republic of South Ossetia.

Ctrl Enter
Noticed oshЫbku Highlight text and press. Ctrl + Enter
We are
South Ossetia celebrated 25 anniversary of the founding of the RSOPublic opinion poll in South Ossetia: 86% - for Russian, 88% - for reunification with Russia
27 comments
Information
Dear reader, to leave comments on the publication, you must to register.