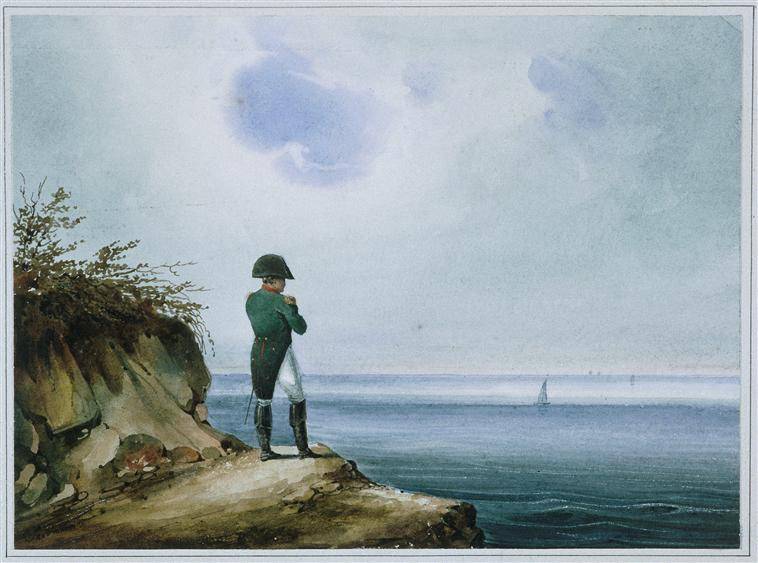 Napoleon on the island of St. Helena. Sandmann (XIX century)

The emergence of the "legend"

The Legend dates back to the Italian campaign of 1796-1797. The great victories won by Napoleon glorified his name throughout Europe. Bonaparte, being an attentive and quick-witted man, understood the future benefits and success of his own propaganda. On July 20, 1797, he founded two newspapers: "Courier of the Italian Army" и "View of France from Italy"... Napoleon did not have to think about financing the newspaper, since they were entirely supported by war booty.

The aforementioned newspapers glorified the exploits of Bonaparte, made him a true defender of the conquests of the revolution, bringing freedom to enslaved peoples. Napoleon tried to ensure that the newspaper was seen by the maximum number of people, so he often handed out newspapers for free.

It was these newspapers that became the starting point in creating the image of the hero. For example, one of the issues of the newspaper said: "Hannibal sleeps in Capua, but active Bonaparte does not sleep in Mantua." Or a newspaper "Courier of the Italian Army" narrates: “Bonaparte is swift like lightning and overtakes like a thunderclap. He is omniscient and omnipresent ... " . "View of France from Italy" narrated:

Looking into his soul, we will see an ordinary person willingly parting in a family circle with the attributes of his greatness. His brain is usually weighed down with some great thought, which often robs him of sleep and appetite. With confidential dignity, he can turn to someone who enjoys his favor: “Before me the kings trembled, fifty million could be stored in my chests, I could claim anything, but I am a citizen of France, I am the first general of the Great Nations, and I know that future generations will give me what I deserve!

When Napoleon became the first consul, having carried out a coup d'état, he was faced with the task of convincing the people that his power was legitimate. In this regard, he is improving his "legend" by introducing new installations into it. Bonaparte explains that the coup was a forced measure that saved France. He said that the country was mired in corruption, deceit, intrigue, fighting between factions, etc. The only way to preserve the gains of the revolution is to change the regime.

Napoleon set out to show the French people that his power ensures peace and happiness for all classes of society. Bonaparte argued that he did not express the will of any particular class. By the way, the whole domestic and foreign policy of Napoleon was as follows: you need to please both groups of the third estate - the peasantry and the bourgeoisie. It was much easier with the peasants than with the bourgeoisie. To ensure the support of the peasantry, it was necessary to give them a guarantee of the inviolability of their possessions, which they acquired during the revolution. The support of the bourgeoisie had to be earned in more complicated ways. During the Italian campaign, Bonaparte realized that the bourgeoisie yearned for peace, which he soon achieved, although the Directory was against this, since the continuation of the war is a guarantee of the Directory's stay in power. Financial reform, the Bank of France, the Civil Code, the continental blockade, wars - all these gestures were aimed at the bourgeoisie in order to get their support.

Propaganda glorified Napoleon, focusing on the following achievements: the elimination of banditry, the end of the civil war in the Vendée, success in the fight against corruption.

After Napoleon established himself in his place and ceased to fear for his power, he began to spread his propaganda in areas such as painting, theater, literature, architecture, music, etc. For example, Bonaparte orders the best artists in France to paint battle canvases on plots of the Napoleonic wars. The great contribution to the development of the "legend" in the field of painting was made by the brilliant artist Antoine Gros. It was he who wrote the masterpiece "Napoleon on the Arkol Bridge", which marked the beginning of a series of paintings glorifying Bonaparte. This painting depicts the moment of the battle at Arcola, when Napoleon snatches out the banner and drags the soldiers along. This attack, launched on the first day of the battle, was drowned out. 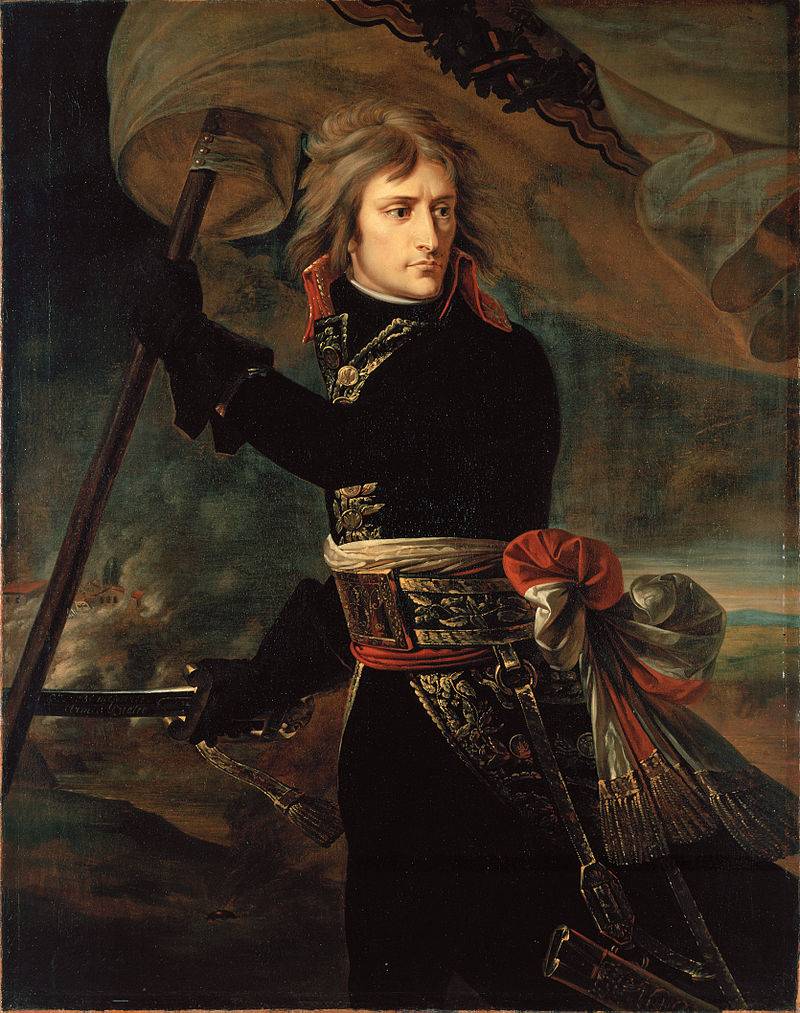 Antoine Jean Gros. Napoleon Bonaparte on the Arkolsky bridge (1796-1797)
The painting contributed to the development of the "legend" "Napoleon at the Plague Hospital in Jaffa", written by the same Antoine Gros. At first, the artist wanted to depict Bonaparte embracing a patient, but this version was rejected, as it was too implausible. As a result, the painting depicted a real brave man who collected all the best human qualities in himself, touching the patient's tumor. In reality, Napoleon did not touch the sick and kept a considerable distance. 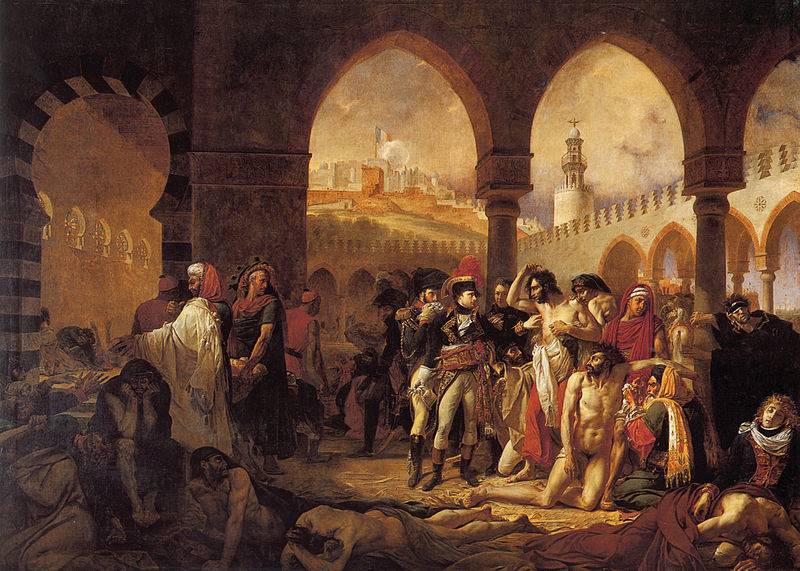 Napoleon visits the plague patients in Jaffa. Gro (1804)
The image of Napoleon was also thought out to the smallest detail. Unlike his marshals and generals, who wore a truly luxurious uniform, he was dressed in a simple gray frock coat and a small hat. All this created the appearance of Bonaparte's "nationality". He even wore his famous cocked hat a little differently from all other senior officers: he wore it at an angle, revealing his face.

Propaganda claimed that Napoleon was a genius, and in everything. Under the full influence of this aspect of the "legend", Merezhkovsky's famous book "Napoleon" was written. It turns out that Napoleon's genius is absolute, it is much broader than his military gifts or personal fearlessness. For example, he is a genius of movement, a genius not only of memory, but also of imagination, that is, a poet whose hero is an ineffable silence, into which he listens attentively at decisive moments of life. Even the philistine in him, according to Merezhkovsky, is brilliant.

Propaganda during this period tried to emphasize that vassal countries receive some benefits and advantages from cooperation with France. An image of cohesion was created between the countries, which together move towards a common goal. The following were cited as advantages: the establishment of freedom of religion, the elimination of feudalism, the introduction of the Civil Code, the establishment of universal equality before the law, the abolition of internal customs barriers, the reorganization of the administrative system, the improvement of finances, etc.

Napoleon was also given the image of peacefulness. According to the "legend", Napoleon always longed for peace and did everything to make it happen. This business has always been spoiled by the sinister England, which constantly financed and formed new coalitions against France. It is noteworthy that always in his wars Napoleon tried to give them the appearance of "liberation". Thus, for example, in his appeal to the Saxons, he said:

Saxons, Prussia has taken over your land. I'm going to set you free. … Will you not make the right choice between those who want to enslave you and those who want to protect you? My success will ensure the existence and independence of your nation.
During the period of the empire, Napoleon was first presented as the viceroy of God on earth. In the new catechism, obligatory for all Catholics, the emperor became like God: "The Lord, - said in the VII Instruction," made it so that he was our ruler, earthly likeness and the executor of His will. To honor and love our emperor is the same as to honor and love God. "

After Napoleon's abdication in 1814, foreign powers placed Louis XVIII, a representative of the Bourbon dynasty, on the throne of France. Napoleon, being on the island of Elba, saw perfectly well that the Bourbons were unable to calm all classes of French society. The people were not pleased with their king, they again wanted an emperor. The ex-emperor in France had his own network of agents, headed by Cipriani, who supplied him with all the necessary information about the state of affairs in the country. After waiting for the right moment, Napoleon fled from the island of Elba, landing on March 1, 1815 in France.

Napoleon needed a reason to return to France. As such, he named the bad rule of the Bourbons. Napoleon said:

Imperceptibly the old laws, the old injustice and feudal order would have been restored ... A terrible reaction was preparing. The indignant and tired people would want to throw off the yoke of the Bourbons, and in less than a year most of you gentlemen would have been hanged, yes, hanged! When I realized this, I decided to return to France, to save this glorious people who do not deserve to be humiliated.
During the year of the reign of Louis XVIII, Napoleon appeared as a usurper, tyrant and despot who did not have the slightest right to rule. Napoleon again had to prove his rights to the throne. While proving his legitimacy, Napoleon at the same time sought to instill the idea of ​​the illegality of the Bourbon rule and of their incompatibility with post-revolutionary France.

In his conversation with the liberal Benjamin Constant, Napoleon explained:

The nation has been taking a break from political unrest for twelve years; it has been taking a break from wars for a year. This double rest returned her need for activity. She wants, or thinks she wants, to have a rostrum and an assembly. She didn't always want them. She threw herself at my feet when I came to power. You must remember this, you tried to be in opposition. Where was your support, your strength? Nowhere. … I wanted to build a world empire, and in order to achieve this, I needed unlimited power. For the rule of France alone, perhaps a constitution is better. … See what you think is possible. Give me your ideas. Public debate, free elections, responsible ministers, freedom of speech - I agree to all of this. … I am a man of the people; and if the people really want freedom, I will give it to them. 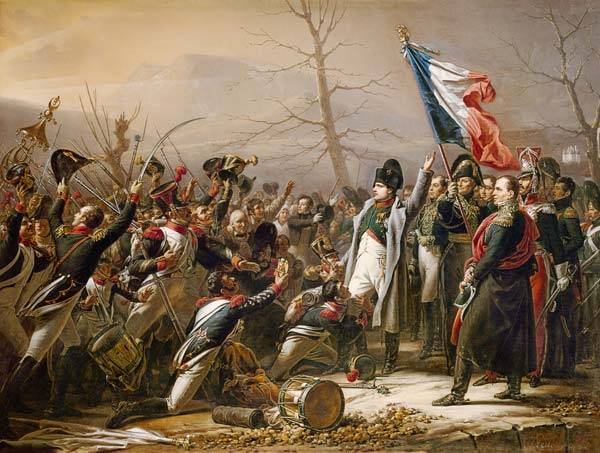 Karl Steiben. "The Return of Napoleon from the Island of Elba" (1834)

After the Battle of Waterloo and the abdication, Napoleon unexpectedly decided to leave his future fate to the British. The fact is that the ex-emperor deliberately subjected himself to inconvenience and torment in Saint Helena in order to immortalize himself forever and appear as a martyr in the eyes of mankind.

From this point of view, the incessant complaints of the emperor about the bad climate of the island and about the mistreatment of the governor of the Hudson Lowe become more understandable: Napoleon viewed his sufferings not only as trials through which he was destined to go, but also as a necessary element for creating his own “legend ”And the most effective way to root it in the minds of the masses.

Undoubtedly, the Bonapartist "legend" gained widespread influence on the masses. For decades Napoleon shaped his image, shaped the way he wanted to see himself in the eyes of his descendants. Undoubtedly, he did it. To be fair, I want to note that not all statements of the "legend" are myths. The Napoleonic "legend" is real events, but unrealistic intentions are attributed to them.