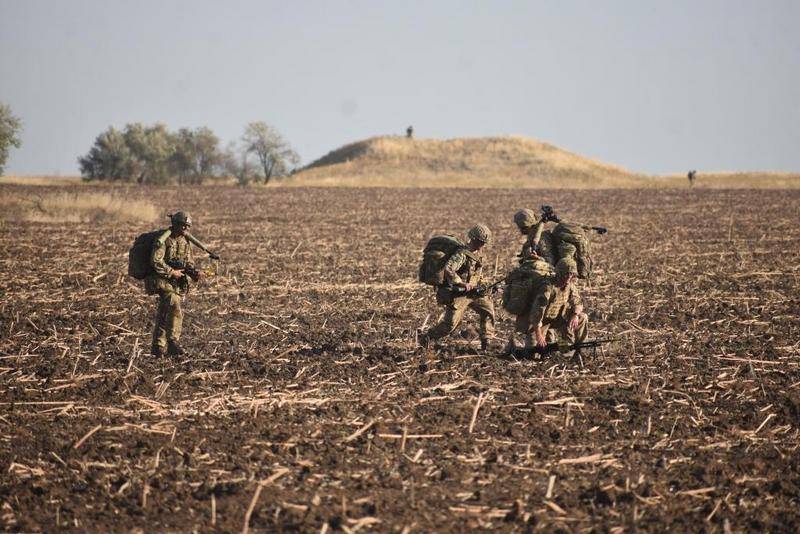 Military exercises "United Efforts - 2020", organized in response to the Russian exercises "Caucasus-2020", have begun in Ukraine. This was reported by the press service of the General Staff of the Armed Forces of Ukraine on Facebook.


The first stage of the exercise began with the landing of British and Ukrainian paratroopers in the Nikolaev region. According to the report, the British were parachuted from the Royal Air Force C-130 Hercules military transport planes taking off from the territory of Great Britain. The paratroopers of the 16th Air Assault Brigade of the British Armed Forces parachuted along with equipment, which is not specified. Following them, Ukrainian military aircraft Il-76MD and An-26 appeared in the sky, from which cargo and units of the airborne assault troops of the Armed Forces of Ukraine were dropped.

This stage of the exercise began with the landing of Ukrainian and British winged infantrymen. Landings took place with weapons and equipment under the cover of the Air Force of the Armed Forces. The entire personnel quickly moved to the collection points. On the routes of advancement, Ukrainian and British paratroopers performed various tasks, in particular, taking control of important areas, objects, etc.
- said in a statement.

The General Staff of the Armed Forces recalled that military exercises of this format and according to NATO standards are being held for the first time on the territory of Ukraine.

Meanwhile, the British edition of the Mirror reported that the landing in Ukraine was the largest landing operation for Britain over the past 20 years, since more than 450 British troops, led by Brigadier General James Martin, participated in the landing in the Nikolaev region.

Earlier, Ukrainian Defense Minister Andriy Taran said that Ukraine will organize its own military exercises in response to the Russian "Caucasus-2020".

According to the latest data, 12 servicemen, 700 units of military equipment, as well as advisers from NATO countries will take part in the United Efforts exercise.
Ctrl Enter
Noticed oshЫbku Highlight text and press. Ctrl + Enter
We are
Summary of the week from voenkor Mag about events in the DNI and LC 21.04.18 - 27.04.18Summary of events in the DPR and LPR for 14.04.18 - 20.04.18 from the military commissar "Mag"
56 comments
Information
Dear reader, to leave comments on the publication, you must to register.