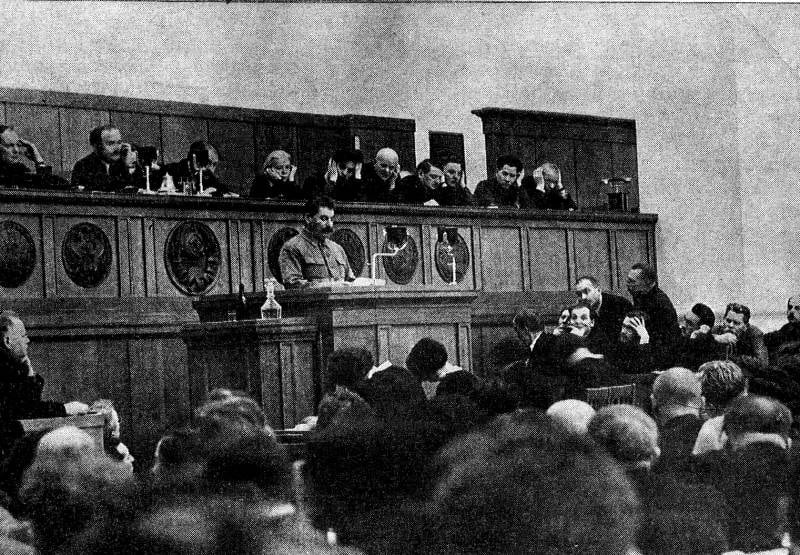 Joseph Vissarionovich Stalin is difficult to classify as the great silent. Not being as brilliant an orator as some revolutionary leaders, above all Leon Trotsky, he nevertheless spoke quite a lot and in front of a wide variety of audiences. However, if you try to find the texts of the Leader's speeches (especially those concerning not purely internal issues of the life of the USSR, but international politics) relating to one of the most difficult periods stories USSR, between the beginning of World War II and the Great Patriotic War, you will learn that all this time Joseph Vissarionovich was extremely laconic.


If he spoke on the above-mentioned topics, then, as a rule, this happened in an extremely narrow circle of trusted persons or in an environment that, by definition, did not imply the disclosure of what was said. It is clear that the main reason for this behavior of Stalin was the extreme complexity of the moment when his one and only word, interpreted in an inappropriate way, could lead to serious complications in the international arena, or even to a war, which the head of the Soviet state sought to avoid for as long as possible. ...

An excellent example of this is the long and extremely confusing story of "Stalin's speech of August 19, 1939", which he never actually uttered. Everything began with the publication by the French news agency "Havas" of the text of a speech allegedly made by Joseph Vissarionovich at a joint meeting of the Central Committee of the Politburo of the CPSU (b) and the leadership of the Comintern. In fact, the entire speech cited by the French news agency (and then immediately replicated by many Western media outlets) is nothing more than a recognition by the USSR leader that our country is interested in unleashing a major war in Europe, and a listing of the many benefits that its leadership is firm in. intends to extract from such.

I will not engage in citing this fake here, I will only limit myself to a statement of the fact: the fact that it is a fake has been established a long time ago and absolutely precisely. To begin with, no Central Committee meetings were held that day and could not be held, as evidenced by at least such serious documents as journals that recorded the movements of Soviet leaders in the Kremlin and their meetings. Moreover, the story of the "speech" was continued twice after the beginning of the Great Patriotic War, when it turned out that the author of this invention, Henri Ruffen, ended up in the territory of France controlled by the Nazis, and clearly actively collaborated with them. In any case, in 1941 and 1942 he began to publish "additions" to the original text, turning it into an increasingly clumsy anti-Soviet and Russophobic concoction akin to the mythical "Testament of Peter the Great."

No wonder the newspaper Pravda, a week after the informational stuffing of Havas, published its refutation, the authorship of which belonged personally to Stalin. Judging by the tone of this angry rebuke of Joseph Vissarionovich, the French demarche, which he called “lies fabricated in the cafe”, led him to extreme irritation. In his short but succinct speech, the head of the USSR speaks from an unequivocally pro-German position, blaming France and Great Britain for the outbreak of the war, which "attacked Germany" and "rejected the peace proposals of both Berlin and Moscow."

It should be noted that the absolute majority ... No, perhaps every single public speech of Stalin of that period (it does not matter whether oral or printed) is imbued with one leitmotif: “The Soviet Union is a reliable partner of Germany, does not build any hostile plans against it and is determined adhere to all agreements reached with Berlin. " Another example is another speech by Iosif Vissarionovich, all in the same publication, the Pravda newspaper, devoted to the reaction of foreign media to the conclusion of the Neutrality Pact between the USSR and Japan. There is no signature of the Leader under this publication dated April 19, 1941, but its authorship has been established reliably.

Here again, statements about "the ridiculousness of the assumption that the Japanese-Soviet pact is allegedly directed against Germany, and also that this pact was concluded under German pressure." Stalin clearly and unambiguously states:

The Soviet Union is pursuing its own independent, independent policy, alien to external influences and determined by the interests of the Soviet people, the interests of the Soviet state, and the interests of peace.
It would seem that all these speeches testify to one thing: the country's leader was in captivity of the deepest delusions and firmly believed in "Hitler's peacefulness", hoping that a military clash between the USSR and the Third Reich could be avoided. In fact, there was nothing of the kind. In order to be convinced of this, it is enough to familiarize yourself with at least one quote from Stalin's speech in front of a "closed" audience, in front of graduates of Soviet military academies on May 5, 1941. The official transcript of this event was simply not kept, but many memories of its participants remained, who later passed the Great Patriotic War and rose to considerable ranks.

According to one of them, Stalin said approximately the following: “We have not developed any friendship with Germany. A war with it is inevitable, and if our Soviet diplomats, headed by Comrade Molotov, manage to somehow delay its start - our happiness. And you, military comrades, go to the places of service and take measures now so that the troops are in a state of combat readiness. " Moreover, at the banquet that followed the solemn part, Iosif Vissarionovich raised a toast to "the future war with fascist Germany, which is the only salvation from millions of our Soviet people being destroyed and the rest enslaved, to the offensive and victory in this war."

It would be possible, in the absence of documentary evidence, to write off this case on the post-war generals' fantasies, but, firstly, not all of them immediately "got used to it". And secondly, this episode was one hundred percent confirmed by none other than Georgy Zhukov, moreover, in a conversation with the historian Viktor Anfilov, which took place already in 1965, when the Marshal of Victory spoke of the Supreme Commander without the slightest reverence and certainly had no reason to flatter him. Stalin knew everything, understood everything, foresaw everything. And not only in 1941.

Stalin's deepest insight is evidenced by his much earlier speech - a report at the 10th Party Congress on the work of the Central Committee of the CPSU (b), made on March 1939, XNUMX. In it, Joseph Vissarionovich not only reveals the essence of the "policy of non-intervention" of Britain and France and their unwillingness to fight back aggressive the encroachments of Hitler, which consists in the desire of these states to incite the Third Reich against the USSR. He directly speaks of the inevitability of a world war and that ultimately the British and Americans will want to let "the belligerents weaken and exhaust each other", "come on stage with fresh forces and dictate their terms to the weakened participants in the war." Isn't that what happened ?!

Ctrl Enter
Noticed oshЫbku Highlight text and press. Ctrl + Enter
We are
Chernobyl notebook. Part of 3Father told
211 comments
Information
Dear reader, to leave comments on the publication, you must to register.