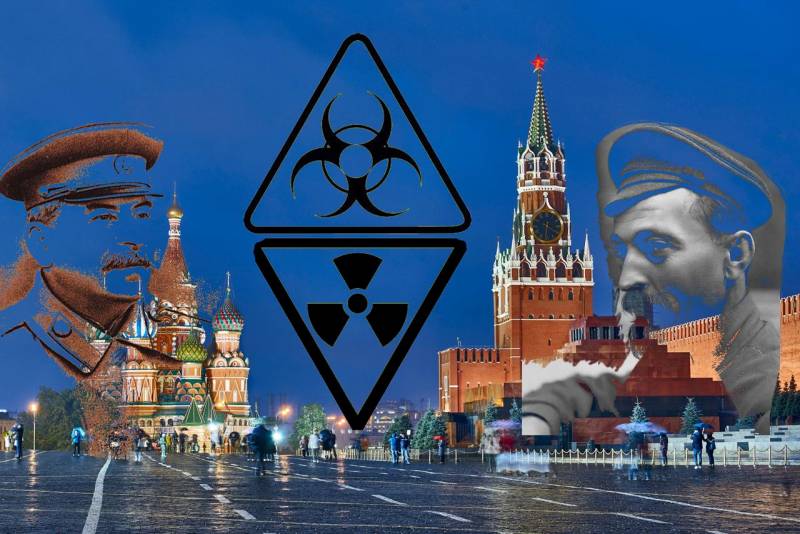 Under the heading "Friday Lovers Club", "Military Review" offers to discuss the topic of how bad modern Russia is. It is so bad that self-respecting ultraliberals live in Russia, perhaps through force.


So. Russia is definitely bad. It undermines the foundations of international law, does not put progressive democracy at all, for which it is in vain to interfere in the elections and goes around with chemical substances falling out of their pockets. weapons.

While progressive humanity in the person of Barack Obama was pondering with one hemisphere of the brain how not to attend the Sochi Olympics in 2014 because of the incredibly cynical infringement of the rights of pederasty, which is not even given, you know, it is normal to propagandize ... cough, cough ... Russia has already drawn a plan for how it will poison Skripal and interfere in the elections.

Everyone understands that for the Kremlin, the Skripal poisoning in Salisbury was literally a vital event. Therefore, the best minds worked on the plan, including the cleaning specialists. Therefore, Skripal's cat fell into the scheme. A couple of London bums - there too. But thanks to the amazing masters of their craft from Porton Down and the regional Salisbury clinic, who secretly rescued the Skripals and wanted to present the whole world with evidence of the neutralization of Novichok, but then they remembered that the case was secret, like themselves. Well, as you know, it is customary for gentlemen to take their word for it.

And before that, insidious Russia, through the efforts of a group of super-hackers who, in broken English, convinced millions of Americans to vote for Trump, intervened in the most democratic and democratic elections in the world. Hillary Clinton was about to celebrate the victory, when it turned out that John from Michigan and Mary from Idaho, who fell under the pernicious influence of Russian hackers, voted against. Hillary had not experienced such a blow since Monica's dress. Oh, this awful Russia!

While Trump was making America great again and was introducing another package of anti-Russian sanctions (of course, not wanting it himself - after all, Vladimir Volfovich himself raised a glass for him), in the cellars of the regime, by the light of kerosene stoves, they saw that the Novichok remained on the top shelf - from the past operations. A half-liter can of the purest, powerful, incredible "Novice". They immediately decided: not to waste the good. They drew another flowchart that lacked only one thing - the identity of the victim. Without thinking twice, we decided on a personality. The main criterion is a fighter against the regime, which has a lot of drives to the regional departments. I found this one.

“Novichok” was diluted with mineral water to make it go better, and they began to think what exactly to smear on them. "Maybe a bottle in a hotel room, the corridor of which is viewed from two CCTV cameras?" - "Great idea!" On that and decided. But the bloodthirsty tyranny did not take into account the most important circumstance. Companions of the regime's victim, as it turned out later, have a unique ability - they can calculate the "Novice" by smell, but only after the regime has poisoned the victim. The bottle with traces of chemical weapons was immediately wrapped in a plastic bag by an associate who followed all the precautions for contact with CWA - he put on rubber gloves. In addition to the precautions, the hair in the nose allowed the Novice to be neutralized at any dose and proportion.

At that moment, the bloodthirsty tyrant in the Kremlin was already ordering: “Immediately give permission for the fighter with me to be taken to Germany. There is no need to waste time on trifles - let independent specialists from the Bundeswehr find Novichok and forbid us to build a gas pipeline. " And so they did. They sent it along with a bottle, on which at first they wanted to write in red marker: "Use with extreme caution, inside - BOV", but then changed their minds, because in Germany they still do not understand Russian.

The brothers of the Solberetsky district clinic in mind from the German "Sharite" have also done incredible things. The patient was healed with the latest technology. These technologies are so new that they allow you to heal the attacked BOV with a firming massage and visit the ward of the attacked by all and sundry.

But Russia still has a chance for improvement. It is suggested by those who ate the dog in defense of democratic values. This chance is to pay and repent. Well, it would not be superfluous to place American observers at nuclear and military facilities, who would also watch how strategic bombers are sent to non-ferrous metal with a gas cutter. That would be the victory of the universal good. In the meantime - sheer horror, chilling darkness and nightmare.

Ctrl Enter
Noticed oshЫbku Highlight text and press. Ctrl + Enter
We are
Reports from the militia of New Russia for 27-28 September 2014 of the yearDecember 2010 years. Russian March. Senseless and merciless? Notes not a Russian person
113 comments
Information
Dear reader, to leave comments on the publication, you must to register.