Anti-Hitler coalition: the first step towards 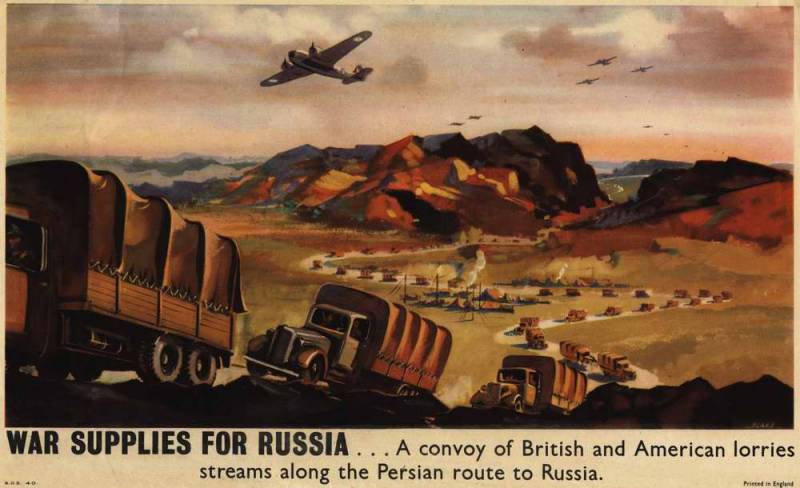 Churchill came up with it all

In reality, more precisely, legally, the anti-Hitler coalition was formed only on January 1, 1942. However, the three great powers began interacting as true allies much earlier.

And this happened even when overseas, as, indeed, in Foggy Albion, many were sure that the resistance of Soviet Russia to the Wehrmacht would not last long. Winston Churchill was undoubtedly the first to talk about the need not only to help, but also to negotiate with Soviet Russia.

In his famous speech on June 22, 1941, the British Prime Minister emphasized not only his country's readiness to fight side by side with all opponents of Nazi Germany, but also that "any person or state fighting against Nazism will receive our help." 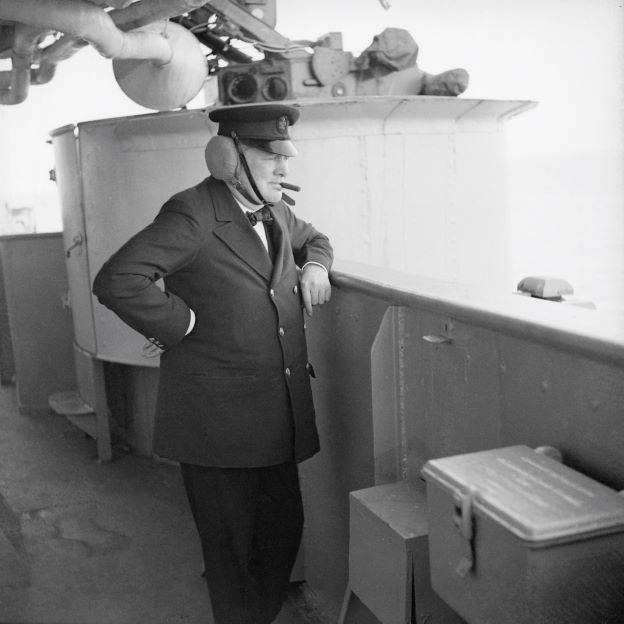 I. Stalin, as you know, first gave the floor to V. Molotov, his deputy, whom he had replaced as chairman of the government just a month and a half earlier, and he himself addressed the people only on July 3. In a short speech, Molotov simply had to confine himself to stating the fact that the USSR was not fighting Hitler alone.

But already in the memorable speech of the Soviet leader, there was a certainty that the USSR would not be left alone in its struggle with Nazi Germany. On that day, the audience could not help but notice that Stalin in his speech separately noted not only “historical speech by British Prime Minister Mr. Churchill on aid to the Soviet Union ”, but also a declaration made by the US government on its readiness to provide assistance to our country.

Despite the fact that there was no question of direct US entry into the war, the overseas partner has already refused military supplies to anyone who is willing to pay for them, having adopted the well-known Lend-Lease program. Both London and Washington immediately realized the need to negotiate promptly to include the Soviet Union in this program.

And, although the leaders of the USSR, Great Britain and the United States began active correspondence between themselves only later, it did not take much time to coordinate the upcoming meetings. By that time, the American military industry, according to the testimony of the American historian Robert Jones, was just emerging from an infant state, and Lend-Lease became a powerful incentive for its development.

President Roosevelt had to make tremendous efforts to circumvent the act of neutrality, and more. We must not forget that in the 1940 elections, Roosevelt spoke out against the participation of the United States in the European war, when his rival, Republican Wendell Weekley, adhered to exactly the same position.

Republican opponents, isolationists in his own apparatus, even Catholics - who only then did not oppose the US getting involved in the European squabble. In democratic America, literally everything was contested, up to a simple sale, for dollars, mind you, weapons and military materials.

Only with business it was a little easier, although even here it was necessary to take such a measure as the appointment of members of the Republican Party as ministers. Already in 1940, Henry Stimson headed the Pentagon, and Frank Knox - the Navy, and the main thing was that they represented the business community.

They are waiting for you in the Kremlin

When the time came to help the Soviets, the president made a positive decision ahead of the curve, and he also preferred not to delay the corresponding negotiations. This is largely why, and also because of his boundless personal trust, he offered his assistant Harry Lloyd Hopkins to head the first mission to Moscow. 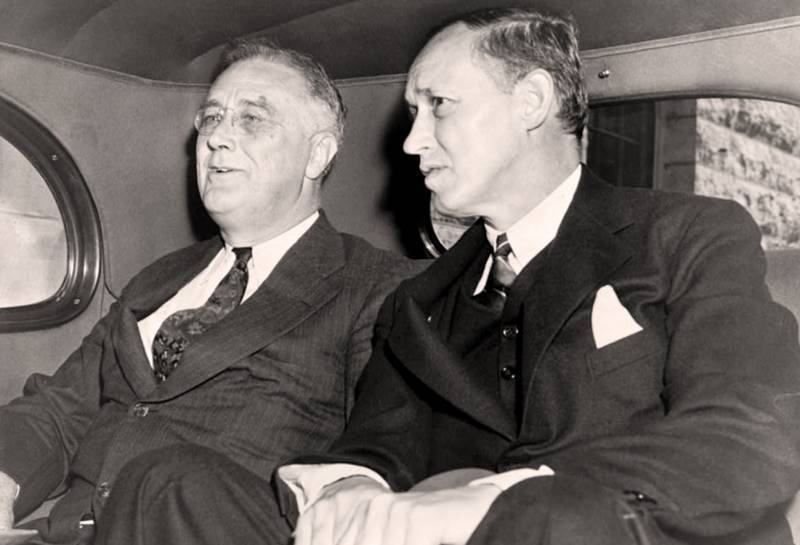 US President F. D. Roosevelt and his assistant H. L. Hopkins
At that time in the United States, it was believed that helping the USSR was almost to its own detriment, and besides, it would have to take away the necessary resources from Britain, which had a great job of keeping the metropolis and the main colonies from the attack of the Germans. In this regard, Roosevelt insisted that this ally, who could simply run out of financial resources, needed to lease ships and other equipment, providing it with large-scale loans.

With similar schemes and explanations on Lend-Lease, the Hopkins mission was sent to Moscow, along with two aviators, General McNarney and Lieutenant Alison, went to see Stalin. Apparently, details were required from them, since almost the main problem for the Russian ally was the superiority of the Germans in the air, which they achieved almost in the very first hours of the war.

Harry Hopkins was tasked with a broader plan: to discuss the scale of supplies and outline their routes. In addition, the observant and corrosive assistant to the US president had to make sure that red Russia was really determined to resist.

F. Roosevelt even reminded his "invaluable", in his own words, employee of the position of almost the entire American press, which did not doubt the readiness of the Soviets to make peace with Germany. It is characteristic that even more than three months later, the position of the mass media in the United States has hardly changed. The Chicago Tribun, the most popular newspaper in the Midwest, for example, wrote on October 17:

It would be ridiculous to expect a sane person ... to continue to believe Stalin, betraying the interests of democracy, to believe that he will not betray and conclude a new deal with Hitler.
Roosevelt was not completely sure that Stalin would be satisfied with a conversation with a person without official status, because Hopkins even left the post of Minister of Commerce due to health problems. Therefore, the American president had to act out of the ordinary.

Harry Hopkins was taking with him to Moscow practically the only real powers - only a telegram from Samner Wallace, at that time the acting US Secretary of State. It contained not the longest message to Stalin from the American president, where, among other things, Hopkins was given a kind of carte blanche. Roosevelt wrote:

I ask you to treat Mr. Hopkins with the same trust you would have if you spoke to me personally.
Hopkins arrived in Moscow on July 30 when things on the Russian front took a bad turn again. However, the city itself surprised the American guest, as it continued to live almost as in peacetime. 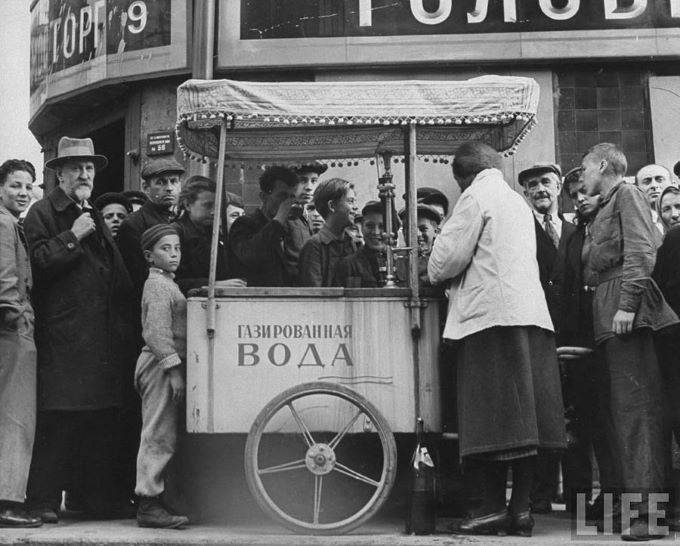 On Moscow streets in July 1941
Hopkins was received in the Kremlin without delay, and although the negotiations even had to be moved once due to the bombing to the Kirovskaya metro station, to the underground premises of the Supreme High Command Headquarters, the parties managed to convey everything they wanted to each other in just three days.

Even then, the volumes of supplies were previously agreed upon, the main types of weapons and materials needed by the Red Army were identified. The total volumes and amounts were even outlined, which were supposed to be met.

According to indirect data, there is every reason to believe that the total cost of supplies to the Soviet Union of $ 1 billion arose subsequently by no means out of the blue. What, what, but Harry Hopkins knew how to count perfectly.

In this regard, it should be noted that at about the same time, the United States was able to determine the scale of all military production in the United States. In materials from the Roosevelt Library, referring to contracts and obligations of the 1941th fiscal year, it is clearly stated that "the total amount of what had to be produced, including under the Lend-Lease, was 48 billion 700 million dollars."

From this it is easy to calculate that all American aid to the USSR under Lend-Lease only slightly exceeded 2 (two!) Percent of the military and the related expenses of the United States in 1941. Yes, subsequently, the second billion was added to the first billion, but the American defense industry did not stand still for the next four years of the war. It only picked up momentum.

Speaking in favor of the point of view that Lend-Lease has become a kind of lifeline for the Red Army and the Soviet military industry, they prefer not to recall such indicators. Neither do they remember that the need for assistance to the Soviets in the States was generally questioned.

Why? Because, you see, it took away a significant part of what was needed by England, other allies, for example China, and the American army itself. The fact that it was precisely foreign orders under Lend-Lease that in 1941 allowed the national business that had just emerged from the crisis to be widely involved in military production, in general, few people remember.

And yet, although no official confirmation of this was made, the first Moscow negotiating round was clearly a success. The most important thing was that the two sides, like real scientists, were able to agree on concepts. It became clear what and how badly the USSR needed, what and how much the USA were ready to supply to the Russians.

Possible routes for future supplies were also outlined. Almost immediately it became clear that the Northern one should become the main one: the famous Arctic convoys with the well-known abbreviation PQ, and then JW, would go to Soviet Arkhangelsk. Return caravans will be called QP and RA.

In reality, in terms of supply volumes, the Arctic route eventually yielded to two others: the Far East and Iran. In the Far East, almost half of the military cargo arrived in the USSR. Including from Alaska several thousand American "Airacobras", "Bostons" and "Mitchells" flew to our front.

For the sake of the southern (Iranian) route, Britain and the USSR promptly brought troops into ancient Iran and subsequently drove tens of thousands of "Studebakers" and other less publicized cargo from the ports of the Persian Gulf.

The fact that the help of the allies would be by no means disinterested did not embarrass the Soviet leader in the least. The prospect of helping Britain and the United States itself with the supply of raw materials, in a certain sense, pleased Soviet specialists, who were familiarized with the results of the negotiations.

Harry Hopkins made sure that no one in the Kremlin even dreamed of peace with the Nazis. Having outlined the terms and conditions of the next meetings, the American politician left for the States fully satisfied and even inspired.

First: supplies weapons, ammunition and food from overseas will begin very soon and you can not cling to emergency supplies at any cost. The notorious state reserve existed even then. There is no need to hurry too much with the evacuation of industrial enterprises, which, at best, will be working at full capacity by the future spring of 1942.

Second: the Americans will sooner or later be at war with Japan, whose expansion in the Pacific region directly hit the interests of business in the United States. This meant that reserves could be safely taken from the Far East, since a stab in the back from Manchuria, occupied by the Kwantung Army, was unlikely to take place.

Agree, the appearance of Siberian divisions at the front shortly before the decisive battle near Moscow, albeit somewhat legendary, only confirms this assessment of the results of the first Moscow Soviet-American negotiations. 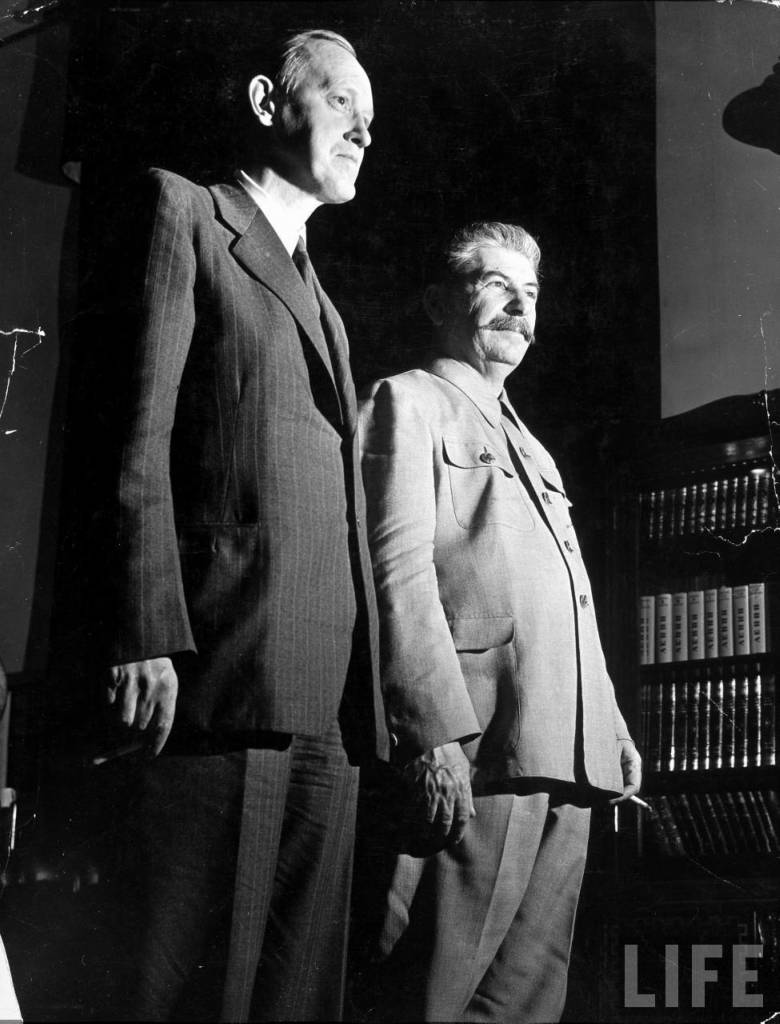 The Soviet prime minister and the assistant to the American president did not even object to the joint photo session, which presented historians with one very humane detail. In a couple of shots, Life magazine photographer Margaret Bourke-White captured Stalin and Hopkins holding cigarettes. Heavy smokers will attest to how much that can say.

Ctrl Enter
Noticed oshЫbku Highlight text and press. Ctrl + Enter
We are
Chernobyl notebook. Part of 3Diplomats of the People's Commissariat of Defense: on the eve and during the war
114 comments
Information
Dear reader, to leave comments on the publication, you must to register.