Balkenkreuz. The history of the "bar cross" 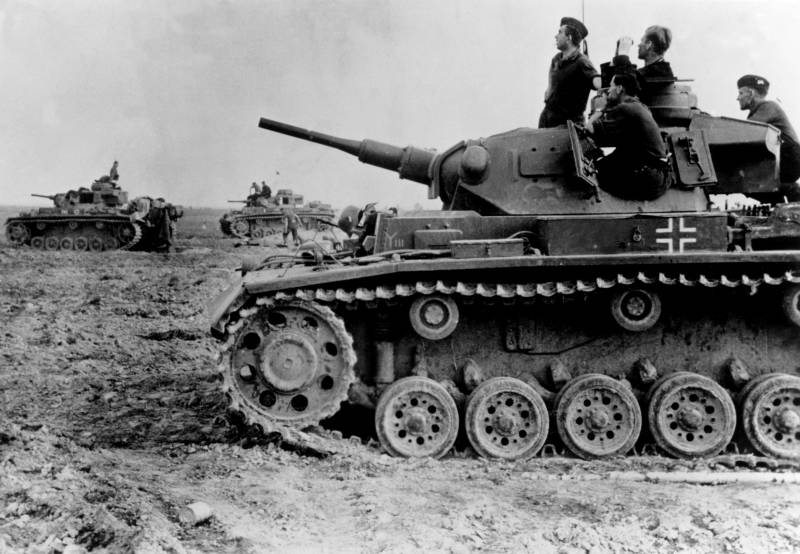 В history The German bar cross, or Balkankreuz, came in thanks to the events of World War II. During the war years, the stylized image of the cross could be found on all German military equipment. Balkenkreuz during the war years was the main identification mark of the Wehrmacht, it was used in the Luftwaffe and Kriegsmarine. At the same time, the very image of the cross was used in the Middle Ages by various German knightly orders, and the stylized image of the "iron cross" is still an identification mark of the military equipment of the Bundeswehr.

The appearance of the cross as a German military symbol

The cross itself, which was widely used on German military equipment during the Second World War, is a stylization of the Teutonic cross and the cross of St. Nicholas (Nicholas the Wonderworker). Very often in the literature you can find an incorrect translation of the word "balkenkreuz" (German Balkenkreuz). The mistake, in which such a cross is called "Balkan", occurs in both Russian and English. At the same time, the cross has nothing to do with the Balkans and the states located on the Balkan Peninsula. From the German language "Balken" is translated as a wooden beam, crossbeam or timber, for this reason the correct translation from German is the phrase "crossbar". 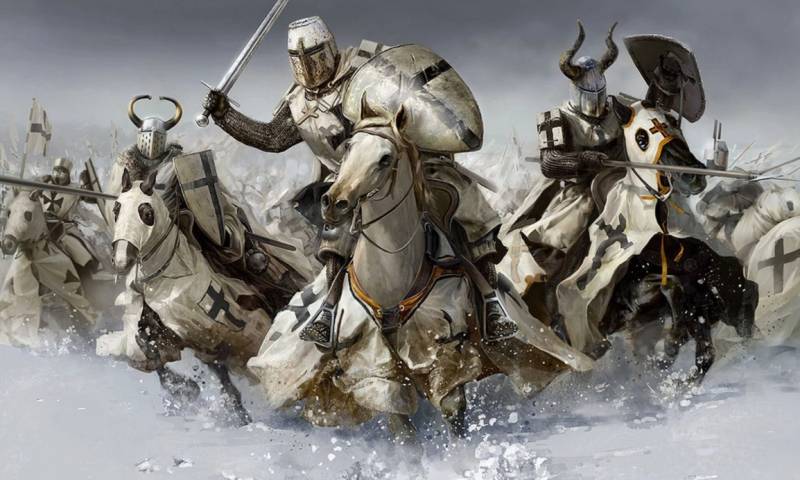 Knights of the Teutonic Order
The first to use the black cross as an identification mark were the Germanic knights, this happened back in the Middle Ages during the era of the famous crusades. The black enamel Latin cross with a white enamel border became the official symbol of the Teutonic Order for many years. The knights of the order widely used the stylized image of a black cross on a white background on their shields, as well as on their cloaks, clothing and banners.

The Teutonic Order itself was founded as a spiritual knighthood. The order's motto was the phrase "Helfen - Wehren - Heilen" ("Help - protect - heal"). According to one version, the order was founded on November 19, 1190 by one of the leaders of the German knights, Duke Friedrich of Swabia. It is believed that this happened after the capture of the Akra fortress by the crusaders. At the same time, a hospital was founded in the city, which became the permanent seat of the order. According to another version, during the third crusade, when the crusaders besieged Acre, merchants from Bremen and Lübeck founded a field hospital to help the wounded crusaders. It was this hospital that Duke Friedrich of Swabia then transformed into a spiritual order. 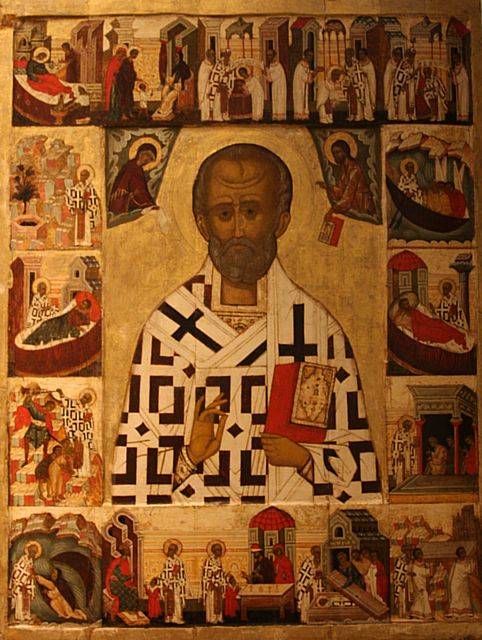 Russian icon depicting Nicholas the Wonderworker, approximately the end of the XNUMXth century
It is known that the transformation of the order into a spiritual-knightly one took place in 1196 in the temple of Acre. The ceremony was attended by representatives of the Templar and Hospitaller orders, as well as clergy and lay people from Jerusalem. This event in February 1199 was confirmed by a special bull of Pope Innocent III. At the same time, the main tasks of the Teutonic Order were determined: the protection of the German knights, the treatment of the sick and the fight against the enemies of the Catholic Church.

The order especially succeeded in the latter. He fought against the pagans in Prussia, the Baltic States, and Eastern Europe. The main and longest onslaught of the order was taken over by the Grand Duchy of Lithuania. In addition to him, the Russian principalities, primarily Novgorod, waged war with the order in different years. Already in the 12th century, the Nazis considered themselves to be the successors of the Teutonic Order, and in geopolitical terms they implemented precisely the medieval doctrine of the "Onslaught to the East". True, unlike the Teutonic Order, which lasted for several centuries, the Third Reich, which tried to get its living space in the East, was safely buried by Soviet and Allied troops and lasted only XNUMX years.

Balkenkreuz during the First and Second World Wars

For the first time in the 1918th century, the cross appeared on German military equipment during the First World War. At the very end of the war, in mid-April XNUMX, Balkankreuz became the official identification mark of the German Reich Air Force. The new emblem was used on German aircraft until the end of the First World War. The new symbol was introduced to improve the identification of German aircraft from the ground and in the air. 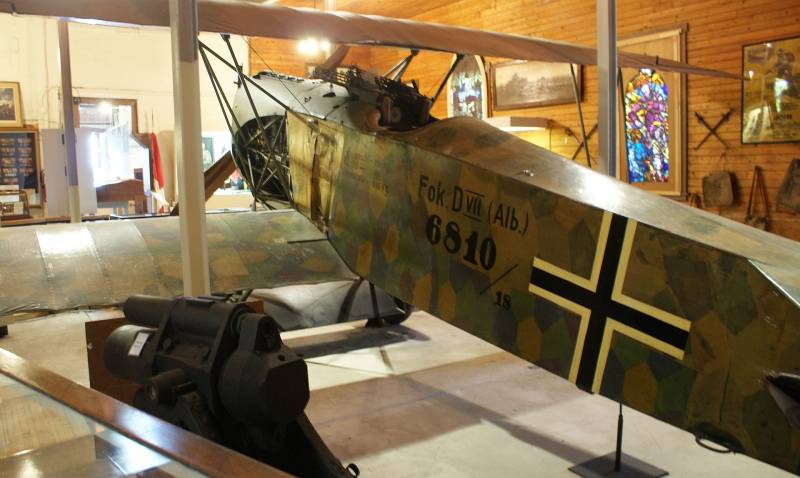 Balkenkreuz aboard a Fokker D.VII fighter, 1918
In 1935, the emblem in the form of a girder cross was again returned, but this time in Nazi Germany. This symbol first became the main emblem of the Luftwaffe, the newly formed German Air Force. In the future, the beam cross was also widely used in the army and in navy, right up to the very end of World War II.

For the first time on armored vehicles, cross-shaped emblems were applied during the Wehrmacht's invasion of Poland in September 1939. At the beginning of the campaign, a large white cross with rectangular equal sides was used. Crosses were painted on turrets and tank hulls. The emblem was clearly distinguishable and was intended to visually distinguish their armored combat vehicles from enemy vehicles. However, the very first battles showed that the emblem is well recognizable not only by its troops, but also by the enemy. It turned out that the white crosses very strongly unmask armored vehicles, representing an ideal target for the Polish artillerymen. The crosses simply made it easier to aim at the enemy, so the German tank crews began to paint over them or simply cover them up with mud. 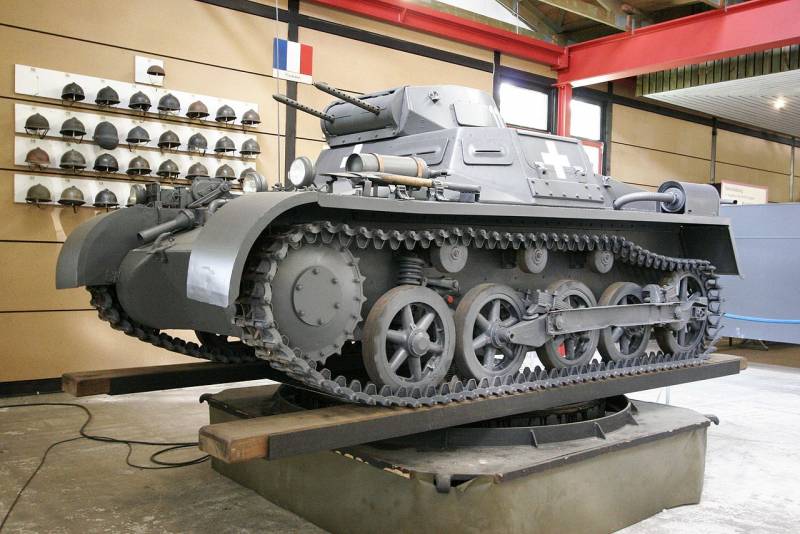 White cross on board the Pz.I tank, this emblem was applied to armored vehicles at the beginning of the Polish campaign
Later, taking into account the experience gained, it was decided to paint over the center of the crosses with a dark yellow paint, which was used to apply divisional badges to Wehrmacht armored vehicles, while only the border of the cross remained white. Already at the end of the military campaign in Poland, a variant was finally adopted, which was widely used in the Luftwaffe, the so-called "open" cross or bar cross. This cross was applied to the armor in the form of four corners of white color directly over the main dark gray paint of German tanks. Already by the beginning of the military campaign against France, Belgium and Holland in May 1940, exactly such crosses were applied on all Wehrmacht combat vehicles as an identification emblem. At the same time, some of the tank crews painted the very center of the cross with black paint. 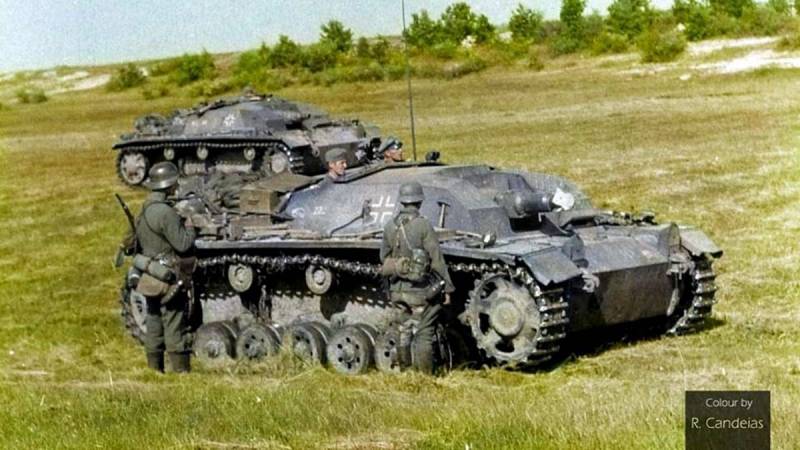 Balkenkreuz from white corners on top of the main dark gray paint of the hull
The sizes of the crosses on the armor could vary, although for the main battle tanks, which the Pz III and Pz IV remained for many years, a single Balkenkreuz size was adopted: 25 centimeters in height. On captured armored vehicles, primarily Soviet ones, crosses of larger than usual sizes were often applied, which was supposed to facilitate the identification process. Until 1943, white corners in most cases were simply applied to dark gray paint, but after it was changed to sand in 1943, the cross was always painted over with black paint. During the hostilities in Africa, they switched to this option for applying emblems to military equipment already in 1941.

Initially, crosses were applied to all military equipment using special stencils, less often by fighters manually. But after in 1943-1944 all German armored vehicles received a special zimmerite coating (anti-magnetic), application began only in manual mode. For this reason, the variety of forms of crosses and their sizes increased markedly by the end of the war. 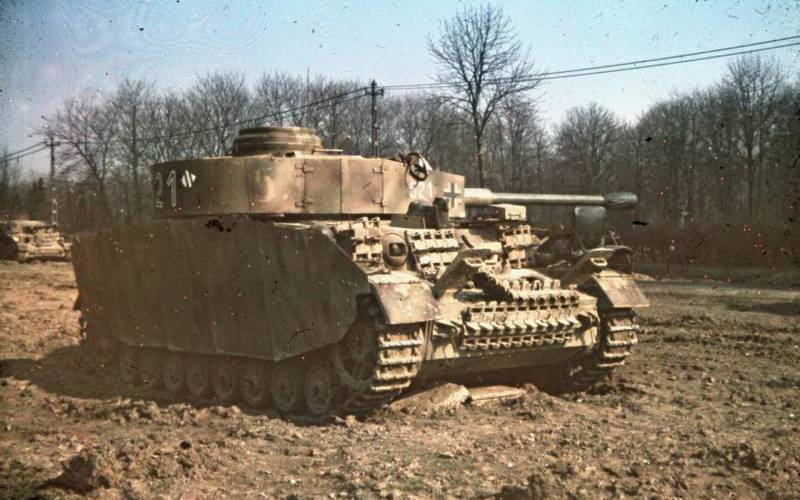 Balkenkreuz on the turret of a Pz.IV tank, the cross is painted over with black paint
Today the cross remains the identification mark and the main emblem of the Bundeswehr, but not the Balkankreuz, but a stylized image of the most famous German military award - the Iron Cross, which has become a stylized representation of the gripping, or Templar, cross. The Iron Cross itself was introduced as a reward back in 1813 to commemorate the liberation of German territory from Napoleon's troops. The new emblem of the armed forces of the Federal Republic of Germany is a clawed, or Templar, black cross, which, like the Balkankreuz, is framed by a white or light-colored edging. 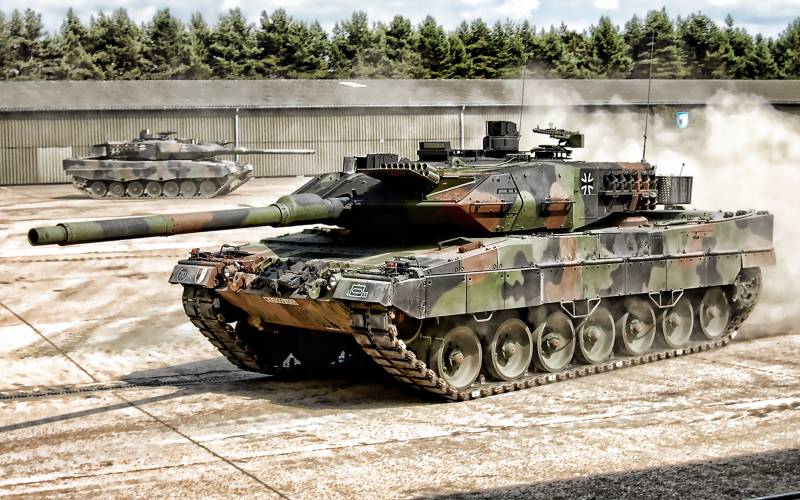 Modern identification mark of the Bundeswehr on the 2A7 Leopard tank

Ctrl Enter
Noticed oshЫbku Highlight text and press. Ctrl + Enter
We are
The first steps of the Bundeswehr. How was the army of Germany created?Myths of the Great Patriotic. Papier mache helmet
184 comments
Information
Dear reader, to leave comments on the publication, you must to register.