Not to be forgotten: Nazi concentration camps in the USSR 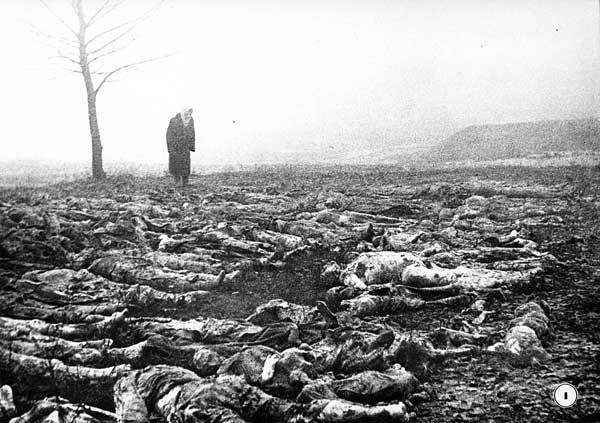 One of the tools for implementing a purposeful strategy to destroy the Soviet people in the territories of our country occupied by the German fascist invaders were concentration camps, where hundreds of thousands of prisoners of war and civilians were kept in inhuman conditions. This crime of the Nazi non-humans cannot have any "statute of limitations" and should never be erased from our memory.


Before moving on to specific examples of the chilling atrocities of the occupiers, a little clarification should be made. The fact is that representatives of the classical historical science (primarily in the West), guided by a number of clear-cut criteria, agreed to consider which of the points of mass extermination organized on our land by the "Aryan" conquerors can be considered concentration camps proper, and which should be attributed only to "places of forced confinement" ...

According to this classification, only ten sites can be classified as concentration camps: camps in the Krasny state farm and the village of Moglino in Russia, in Maly Trostenets and Koldychevo in Belarus, Syretsky and Yanovsky camps in Ukraine, camps in Estonian Vaivar and Lithuanian Kaunas, as well as Riga-Kaiserwald and Salaspils located in Latvia. I will not enter into a discussion with pundits, but I will note that I consider the assessment that Ilya Vasiliev, the head of the Alexander Pechersky Foundation, gives in his research, much closer to the truth. He speaks of forty-four and a half thousand places of mass extermination of Soviet people in our occupied territory.

It is difficult to disagree with such an assessment. For example, in the camp they set up in Gatchina, the invaders, according to reliable archival documents, tortured and killed more people than in the world-famous Ravensbrück! And there were much more such camps in the Leningrad Region alone: ​​in Pavlovsk, Gatchinsky, Kingiseppsky, Krasnoselsky, Luga, Oranienbaum and Tosno districts, in the city of Vyborg, where there was a prisoner of war camp. And what, tell me, objects to rank the camp set up by the occupiers in the Stalinozavodsky district of the city of Stalino (present-day Donetsk), where 25 thousand people were killed, or the Smolensk camp No. 126 for prisoners of war, where the death rate was 150-200 people per day? To places of mass recreation?

The "supermen" who made a treacherous attack on the Soviet Union, in full accordance with the cannibalistic doctrines of their leaders, carried out a well-thought-out, calculated and well-organized campaign to "free up living space" for the "Aryan" nation on the temporarily occupied lands. Within its framework, the concentration camps served several purposes at once: they were supposed to break the will to resist the Soviet people through intimidation, significantly simplify and accelerate the process of complete destruction of those who were classified as "racially handicapped", and along the way they were also used to organize slave labor of the conquered peoples.

This whole nightmarish system was organized with purely German pedantry. It was run by two sinister Nazi structures: the Main Administrative and Economic Directorate of the SS (WFHA) and the Main Directorate of Imperial Security (RSHA). Such organizations of the Third Reich as "DAV", "Organization Todt", "Baltneft" and others took part in the inhuman exploitation of prisoners. It should be said that many of the camps were also used by representatives of "Aryan medicine" who carried out inhumanly cruel experiments and experiments on prisoners. The "doctors" of Salaspils, Kaiserwald and the camp in Vaivar were especially "famous" for such things.

Most of the prisoners of the Nazi "death factories" did not even die from a noose or a bullet (although they were executed in these camps not only for the slightest offense, but on the first suspicion of disobedience or simply because of disability), but from hunger, overwork and living in completely unthinkable conditions. Overcrowded barracks, not heated in the winter and not ventilated in the summer heat, the most terrible unsanitary conditions and a "diet" consisting of a bowl of balanda and a scanty portion of ersatz bread could kill anyone. And they killed ...

It is clear that only individuals with a completely sick mentality and pathological sadistic inclinations, which aroused disgust even among the majority of Wehrmacht officers, could manage such places. The brightest example here is the commandant of the Yanovsk concentration camp, Gustav Vilhaus, who shot prisoners standing in line for a ration right from the window of his own office. He celebrated his 54th birthday by personally killing 54 prisoners. The orchestra from Yanovskiy, who played the "tango of death" during executions, has gone down in history forever, and his photograph has become one of the pieces of evidence at the Nuremberg trials.

It is also impossible to remain silent about the fact that the overwhelming majority of the guards located in the occupied Soviet territory of the concentration camps were rabble, recruited from the locals. Traitors who became policemen and members of special security teams, in cruelty and savagery, strove to surpass their own German masters, who with great pleasure entrusted them with the bloodiest and most dirty deeds. Representatives of Ukrainian nationalist organizations were especially widely "noted" in this field.

It is impossible to establish the exact number of Soviet citizens who have passed through this hell. Moreover, even the number of people tortured and executed there cannot be counted, in particular, due to the fact that not all of their burial sites have been found. Nevertheless, even according to the most rough estimates, more than 200 thousand people were killed in the Nazi concentration camps on the territory of the USSR during the period of its occupation.

Ctrl Enter
Noticed oshЫbku Highlight text and press. Ctrl + Enter
We are
Myths of the Great Patriotic. Why did the Stalingrad prisoners die?Dark spots of history: the tragedy of Russians in Polish captivity
51 comment
Information
Dear reader, to leave comments on the publication, you must to register.