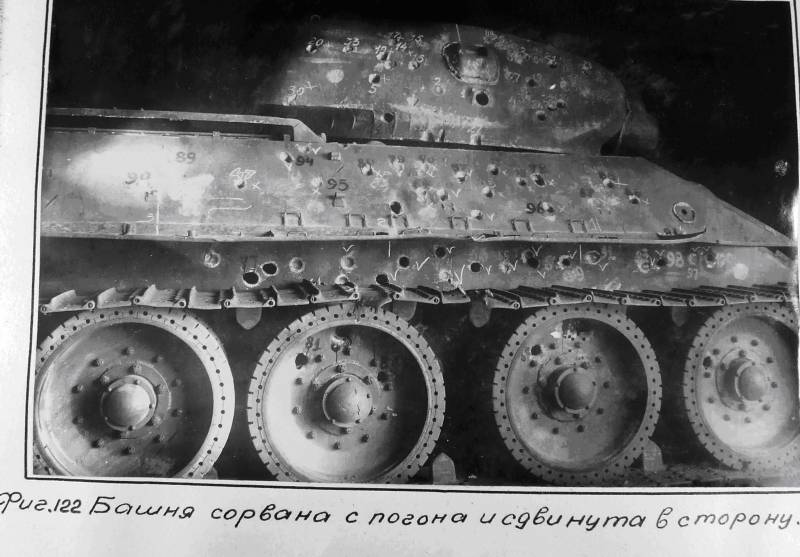 In previous parts stories about the research and testing of captured ammunition, it was about the penetration of the domestic tank become. Of particular interest in the Sverdlovsk TsNII-48 report is a detailed study of the nature of the holes from German shells. So, from subcaliber ammunition on the plate, shallow dents from the coil were clearly visible, in the middle of which there were deep dents or even holes from the core. Here again the differences between medium hardness and high hardness armor showed themselves. The hard armor of the 8C made the core ricochet, it changed its direction somewhat, hit the armor sideways and collapsed. The T-34's high-hardness armor was a definite advantage in countering the new German subcaliber shells. 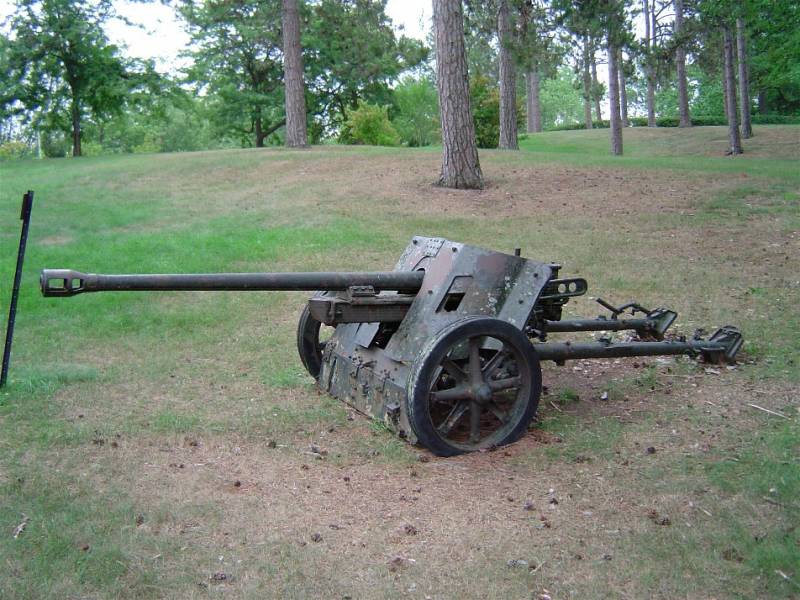 50 mm PAK-38. Source: wikipedia.org
Classic armor-piercing projectiles behaved in a completely different way, which can also explode while passing through or behind armor. If the barrier was thin enough, then the ammunition calmly passed through it, leaving a neat hole in the armor, equal to its own caliber, and exploded inside the armored vehicle. It is important that the projectile returned to normal, that is, it turned when it touched the armor plate. There were explosions of a shell inside the thickness of the armor. In this case, torn holes were formed or (in case of failure to penetrate) spalls on the back side of the protection.

One of the paradoxical conclusions of the TsNII-48 test commission was not the highest rating for German subcaliber shells. So, the report mentions that for high-hardness armor, 50 mm armor-piercing shells are most effective, while the same sub-caliber shells are noticeably inferior to them. A similar situation with a caliber of 37 mm. The downside of sub-caliber captured shells was the absence of explosives "on board", which, according to domestic engineers, reduced the damaging effect of penetration.

Domestic artillery showed itself in comparative tests not in the best way: 45-mm armor-piercing shells were much weaker than 50-mm German shells and, surprisingly, 37-mm "door knockers". The disadvantages of the Soviet guns were the insufficient initial velocity of the projectiles (only in comparison with the 50-mm German projectile), as well as mainly design features. Domestic 45-mm shells of a blunt-headed form in comparison with sharp-headed German 37-mm caliber had less penetrating ability. The secret of the German artillery consisted primarily in the greater hardness of the welded armor-piercing bow. At the same time, the 45-mm projectile had a high muzzle velocity of 820 m / s versus 740 m / s for the German 37-mm, but this did not particularly help. Domestic artillery badly needed carbide armor-piercing tips. 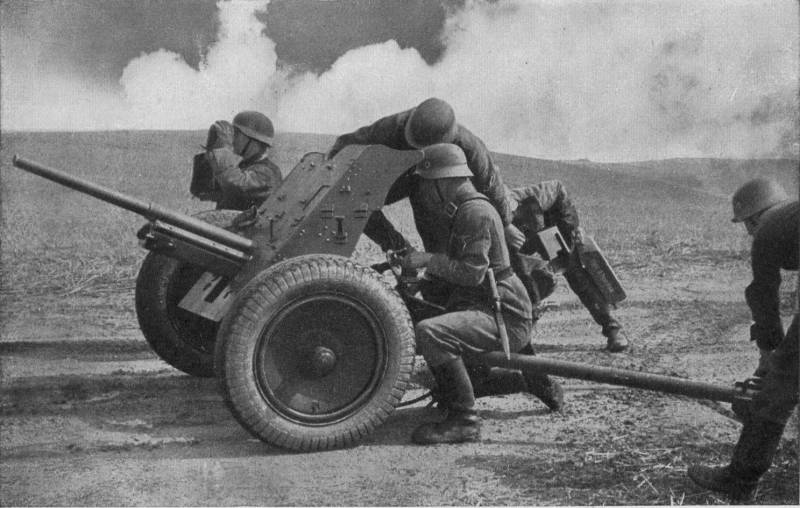 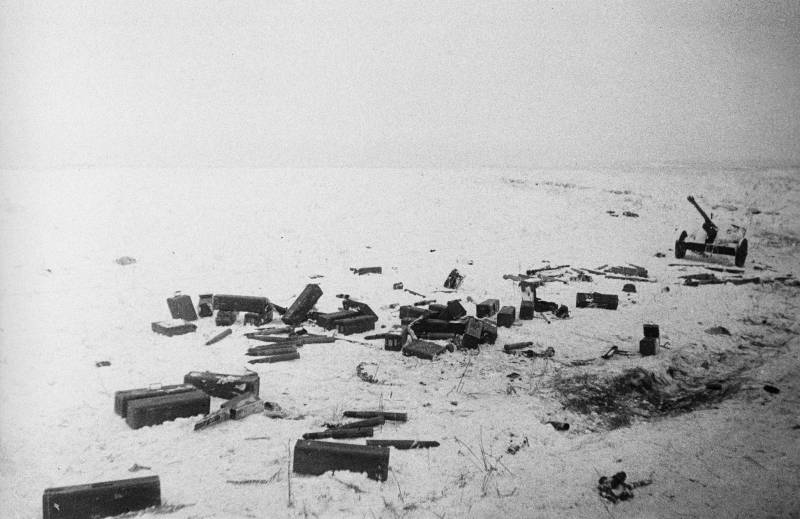 German anti-tank crews. Source: waralbum.ru
Definitely in favor of the German anti-tank crews, a wide variety of shells played: conventional armor-piercing with and without tips, sub-caliber and cumulative (or, as it was accepted at that time, komulative). As the specialists of the TsNII-48 admitted, all this made it difficult to choose a universal armor suitable for protection against all types of German armor-piercing ammunition. Unfortunately, the Germans on the battlefield could choose how to hit Soviet tanks. For example, if there was a KV in the sight, then a sub-caliber projectile was prepared for it, and an armor-piercing pointed-headed projectile with a carbide nose for the T-34. At the same time, the largest percentage of damage on the battlefield by the end of 1942 falls on classic armor-piercing shells, while the proportion of defeats with sub-caliber shells is only a few percent. Specialists of TsNII-48 left one curious footnote regarding the pre-war period during the layout of the report. It turns out that back in the late 30s they repeatedly pointed out the need to equip the Red Army with sharp-headed shells with armor-piercing tips. At the same time, the advantage of such schemes was especially emphasized in the defeat of homogeneous armor of high and medium hardness - the main types of armor in the mass production of tanks. At the end of the report, the chief engineer of TsNII-48 brought out the following characteristic phrase:

In discussions about the defeatability of domestic tanks, there are important facts regarding the KV armor. According to TsNII-48 estimates, the tactical characteristics of the armored hull of a heavy tank with 75 mm armor show its satisfactory resistance to shelling by a 37-mm German cannon. Not good, but satisfactory! At the same time, a sub-caliber 50-mm captured projectile pierces the KV's forehead, however, without taking into account the shielding plates. For comparison: a similar projectile did not penetrate the forehead of the T-35. At the end of the KV, it was also struck by the usual sharp-headed 50-mm armor-piercing shells. All this information from the Sverdlovsk report does not quite agree with the well-established stereotypes about the invincibility of KV machines in the initial period of the war. It is worth mentioning that this is data from field tests, when both the projectile flies at the right angle and the surroundings are greenhouse. The analysis of the combat lethality of the KV presented a slightly different picture. Despite the small sample, only 226% of the 38,5 shell hits were on the turret and 61,5% on the hull. A mine explosion hit about 3,5% of KV tanks, and a fire - 4,5%. Of the total number of damage to the armor of KV tanks by German shells of caliber less than 50 mm, there were no holes; from 50-mm armor-piercing shells - 9,5% of holes, from 50-mm APCR shells - 37%, from 88-mm armor-piercing shells - 41% and 105-mm armor-piercing shells - 67% holes. Attention is drawn to almost the same proportion of defeats of a domestic heavy tank by 50-mm and 88-mm shells. 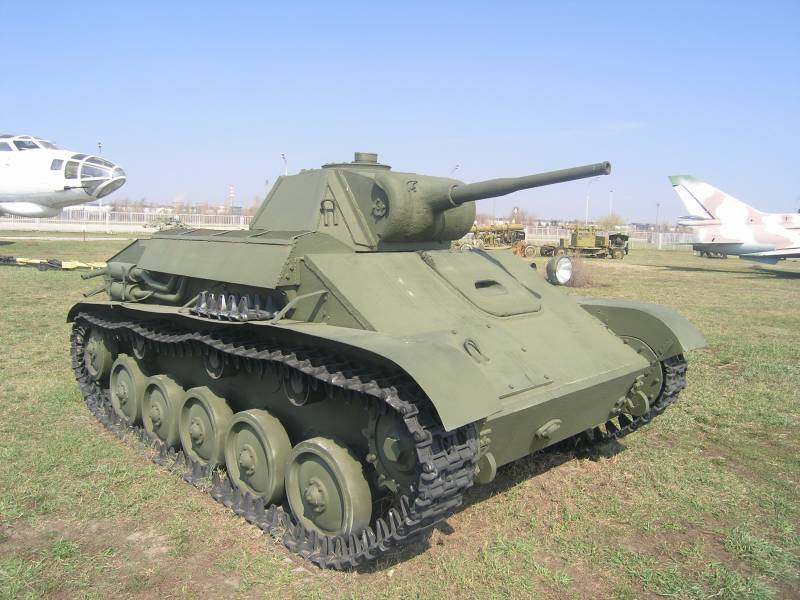 T-70. Source: wikipedia.org
The tactical characteristics of the armor of the light T-70 also became the subject of discussion by the specialists of the Armored Institute. The German "door knocker" was not capable of piercing the forehead of the tank, but quite coped with its sides. As expected, 50-mm shells pierced the frontal plates of the T-70, while the classic armor-piercing was preferable in this case. On the one hand, they were cheaper than sub-caliber ones, and on the other hand, they carried a supply of explosives, which was fatal for the crew. The defeat statistics of the T-70 revealed almost 100% of the penetration of the sides by shells from German artillery. TsNII-48 did not fail to once again accuse the crews of light tanks of ignorance of technology and battle tactics, leading to too dangerous and frequent defeats of the sides. Too effective and widespread artillery of 37 mm and 50 mm calibers forced the Armor Institute to think about developing measures to improve the armor protection of tanks. However, one could not even count on any significant restructuring of production. 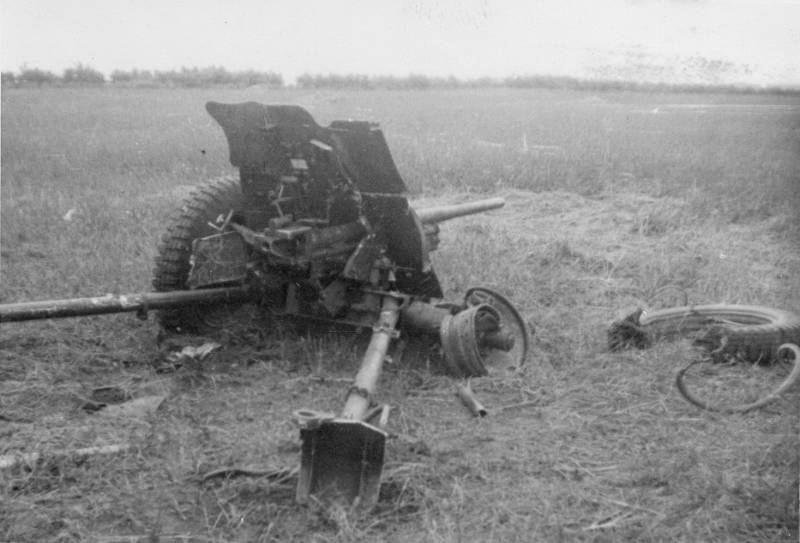 Source: waralbum.ru
In response, they proposed thickening the armor in the most vulnerable places, changing the slope of the armor at the greatest possible angle with the vertical, developing new types of heterogeneous armor and shielding tanks. Practically all exits required a radical restructuring of tank production, which would invariably lead to a decrease in the rate of deliveries to the front. The choice fell on the shielding of tanks. In order to minimize the weight of the screens, the principle of platoon armor, which is used in ship armor, was involved in the development. The principle of additional armor by hinging screens, usually used in tank building, was rejected as not providing the necessary weight savings.

Ctrl Enter
Noticed oshЫbku Highlight text and press. Ctrl + Enter
We are
German shells against Soviet armor: tested in the UralsTrophy Belgian, British and French anti-tank guns in the German Armed Forces in World War II
142 comments
Information
Dear reader, to leave comments on the publication, you must to register.