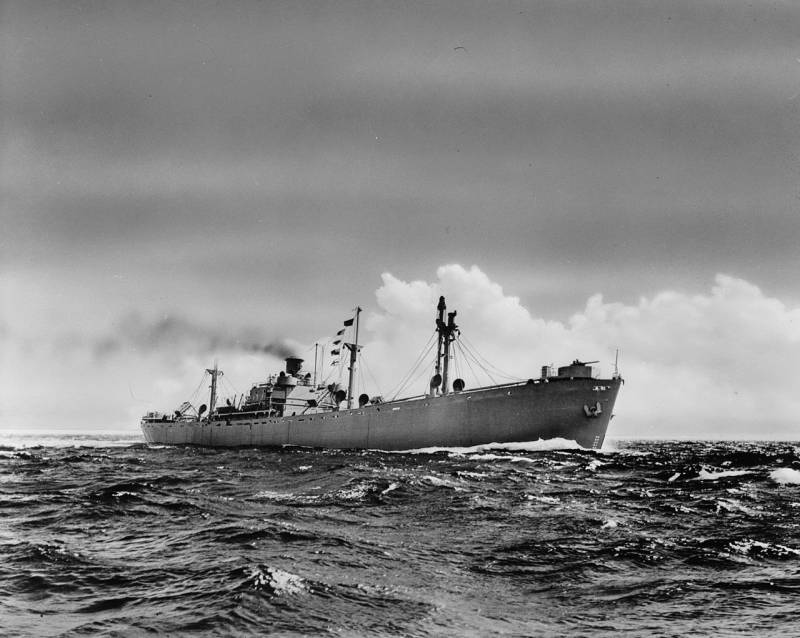 Liberty ship at sea. Photo US Office of War

In the spring of 1941, the United States began construction of the first transport ships of the EC2-S-C1 type, which later received the common name Liberty. These steamers remained in series until 1945 and eventually became the most massive ships of their era. In just a few years, 18 US shipyards managed to build 2710 ships of several modifications. On average, two new vessels were handed over to the factories every three days. Obtaining such rates of production would have been impossible without a number of important technical and organizational solutions.

On the way to "Freedom"

In 1939-40. before the belligerent Great Britain and the neutral United States, the question arose of organizing massive sea transportations across the Atlantic in the face of active opposition from German submarines. To solve such problems, it was required to be simple to manufacture and operate, as well as inexpensive and massive transport ships.

Already in 1940, the two countries agreed to build Ocean-type transports. The project was developed by British engineers, and the construction of 60 ships was entrusted to American shipyards. Soon after, the US Maritime Commission launched work on its own design for a similar vessel, even simpler and cheaper.

Ship layout EC2. Drawing by Wikimedia Commons
Based on our own and foreign experience and ready-made samples, a new project was developed in a few months. It received the official designation EC2-S-C1 - it indicated the purpose of the vessel (Emergency Cargo), dimensions (waterline length from 120 to 140 m) and the presence of a steam engine. Letters "C1" were the project's own number. The name "Liberty" appeared later, when the first ships of the series were launched.

The project initially provided for engineering and technological measures aimed at simplifying the design, accelerating and reducing the cost of construction, etc. All this influenced the appearance of the hull and superstructure, power plant, onboard equipment, etc. Since it was about wartime ships, weapons for self-defense were envisaged. 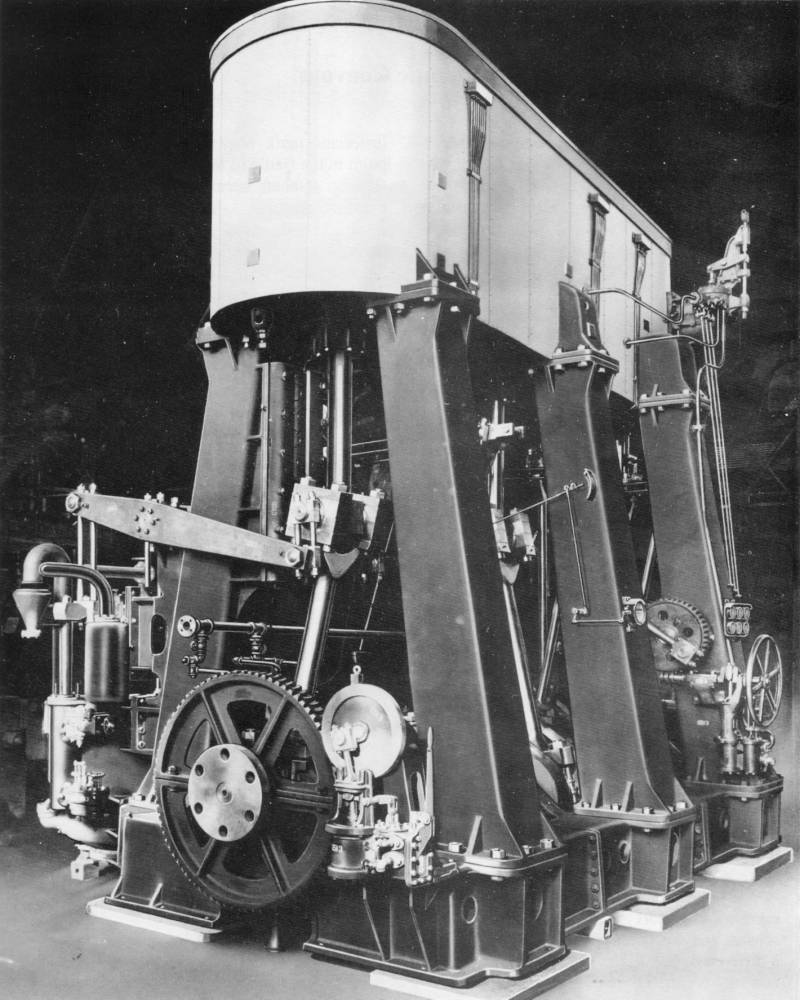 Steam engine for Liberty. Photo US Maritime Comission
The hull design for Liberty was based on the British Ocean project. At the same time, the manufacturing technologies were revised. Most of the riveted joints have been discarded and replaced by welding. The installation of rivets, according to estimates, took about a third of all labor costs, and in addition, this process seriously increased the duration of construction and negatively affected the total mass of the structure. We also applied the modular architecture of the vessel. Separate sections were assembled on small slipways, which were connected as construction proceeded.

By the early XNUMXs, steam engines were outdated and did not meet all modern requirements. Nevertheless, such engines were notable for their simplicity and low cost both in production and in operation. The last factor was decisive in the development of the most simple steamer. 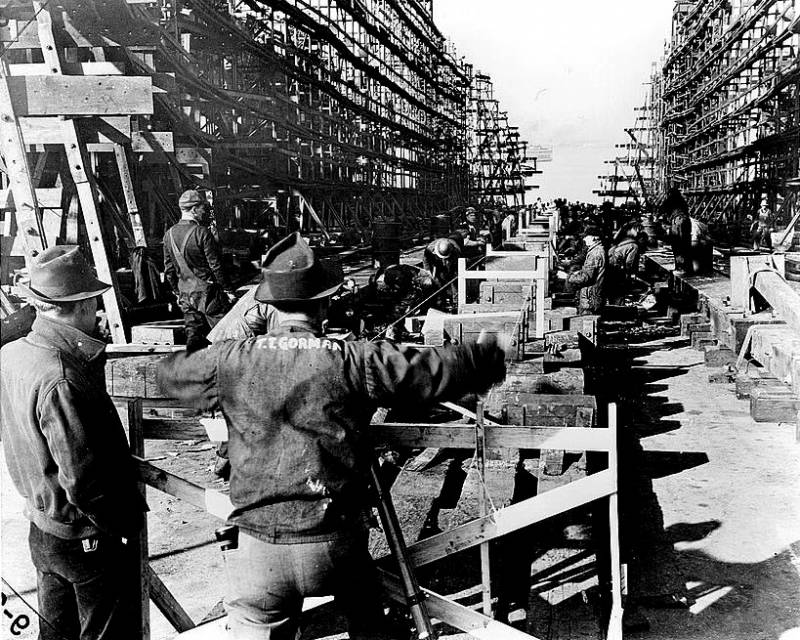 Preparing to lay down another transport at Bethlehem-Fairfield Shipyards Inc., March 1943. Photo by US Office of War
The EC2-S-C1 project used a power plant based on the Ocean's machines. It had two liquid fuel boilers that supplied steam to a triple expansion compound machine. The shaft power reached 2500 hp. and was issued for one propeller. The units of the installation did not differ in high complexity and could be produced by various enterprises.

Five holds, separated by sealed bulkheads, were intended to accommodate the cargo. It was also allowed to place cargo on deck. Bays of large volumes could be used for different purposes. Liberty could transport various equipment assembled or in the form of machine kits; various cargoes in standard containers, etc. A tanker (pr. Z-ET1-S-C3) was developed on the basis of a dry cargo ship - in this case, the holds were designed as containers for liquid cargo. There is information on the development of a modification of the ship for transporting soldiers. 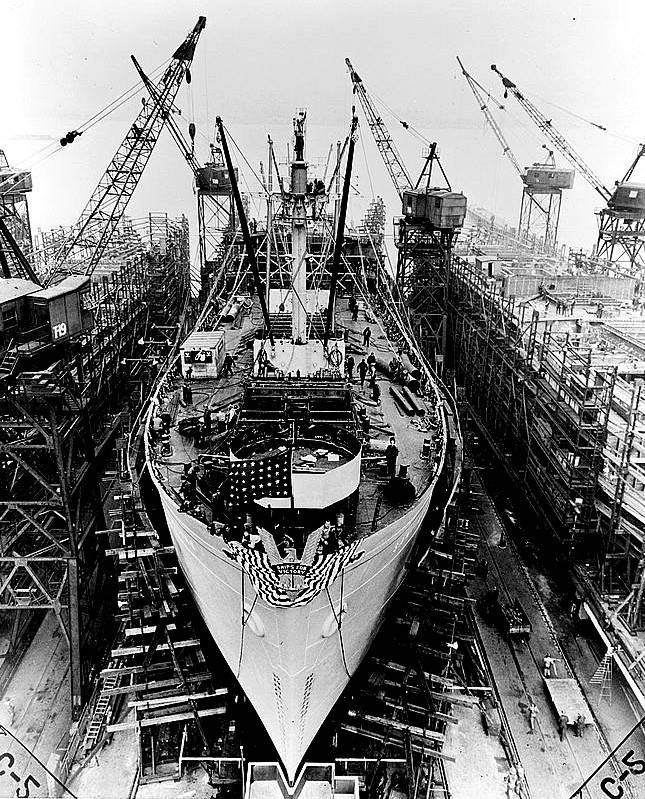 The same construction site 24 days after laying. Photo US Office of War

The construction of the new EC2-S-C1 transports was launched in the spring of 1941. The first order for 14 vessels was received by several factories on the West Coast at once. Construction on the slipways took several months, and the descent of all ships of the series took place on the same day - September 27, 1941. At the same time, in his speech, President F.D. Roosevelt first called the newest steamers "ships of freedom."

Subsequently, new enterprises were attracted to the construction of Liberty. By 1942-43. 18 shipyards and several hundred component suppliers participated in the program. Each shipyard was able to allocate several slipways, due to which it was possible to ensure a constant and continuous process of construction, launching and commissioning.

Mastering production turned out to be not the easiest process. So, a number of shipyards had to master a new welding technology and train specialists. It took some effort to deploy the modular build. Accelerating the construction process was also not the easiest thing to do. Nevertheless, all the main tasks were successfully solved, which affected the pace and quality of construction. 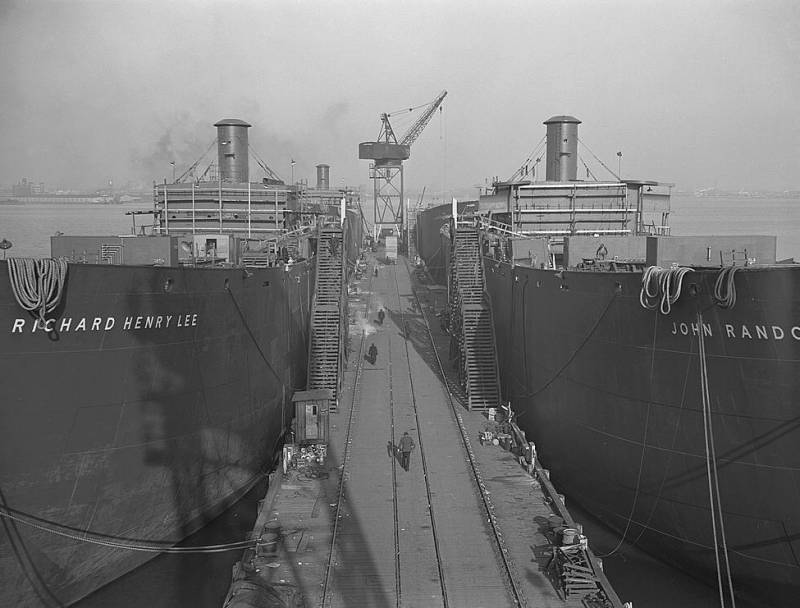 The same ship is being completed afloat next to the sistership. Photo US Office of War
As the roll-out and construction accelerated, staffing issues had to be addressed. New jobs were created, and often it was not possible to find workers with experience - they had to be trained right on the job. After the United States entered the war, some of the specialists went to the front, and they needed a replacement. The number of workers without experience has grown; women began to come to work.

With a high pace

It took about 14-220 days to build the first series of 240 ships. Then the enterprises gained momentum, and by the end of 1942, no more than 40-50 days passed from laying to commission. Working at such a pace, 18 factories could commission a ship every couple of days. On average for the entire time, every three days the customer received two steamers. As they joked sadly at the time, America managed to build ships faster than Germany sank them.

The production of steam engines at several factories also proceeded at a high pace. For example, the Permanente Metals Corporation shipyard in Richmond received engines from the Joshua Hendy Iron Works. Over time, he managed to accelerate production and release cars with an interval of 41 hours. 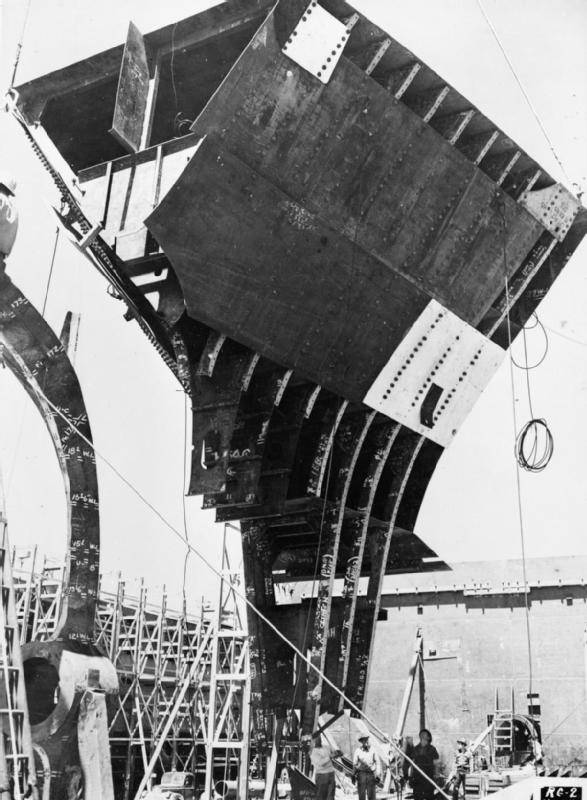 Assembly of the bow section at the Richmond plant. Photo UK Imperial War Museum
Acceleration and simplification had an economic effect. Serial "Liberty" cost approx. $ 2 million - less than 40 million at current prices. The cost reduction in comparison with other vehicles of the time allowed the EC2 to be built in a large series, covering the needs of the United States and allies. Until 1945, 2710 ships were built. There were orders for another 41 corps, but with the end of the war they were canceled.

From a certain time, a kind of competition was conducted between the factories. So, in September 1942, the Oregon Shipbuilding Corporation built the SS Joseph N. Teal dry cargo ship in just 10 days. The shipyard in Richmond soon responded to this. At noon on November 8, she laid down the SS Robert E. Peary transport. On November 12, by 16:00, the ship was launched, and the acceptance certificate was signed on November 15. The construction took 7 days and 15 hours. 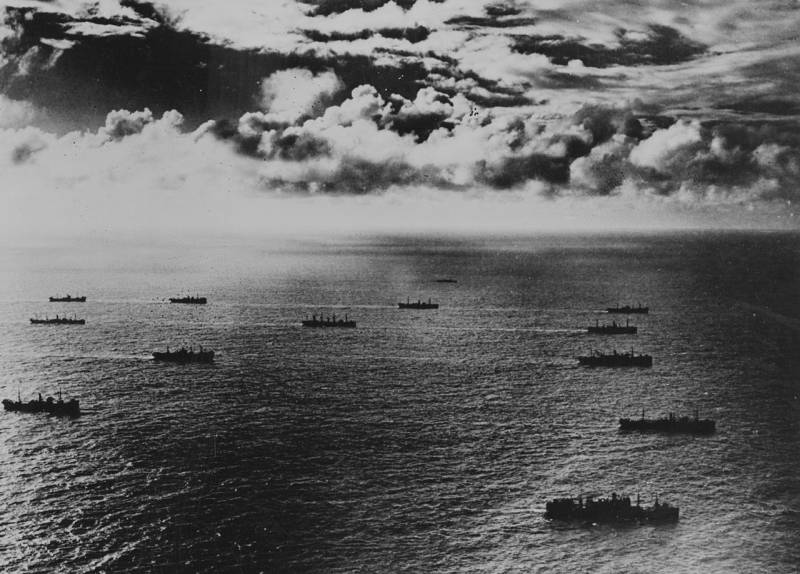 Liberty ships in convoy, 1942. Photo by US Navy
Such records were widely covered in the press and were actively used in propaganda. The civilians and soldiers at the front, as well as the enemy, were shown what American industry was capable of - and why it was not worth getting involved in a war with the United States. However, all these were isolated cases. Record construction projects required a special strain on the efforts of the plant and its suppliers, and could also lead to a drop in the quality of the "fast" vessel and negatively affect other orders.

It should be noted that the EC2-S-C2 vessels and their derivatives, for all their advantages, were not ideal. There were a lot of problems of various kinds, often leading to negative consequences. The main reason for this was the compromise approach to design and construction - often sacrifices were necessary to complete the main tasks of the project.

From the very beginning, the project had image problems. The vessels of a simplified design had an appropriate appearance, which is why they were criticized both in the press and from officials. It is for this reason that in September 1941 it was necessary to take action and call EC2 "courts of freedom". 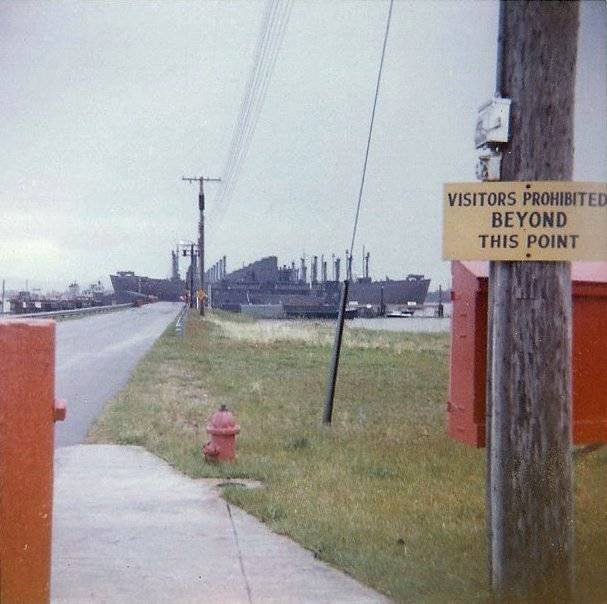 Decommissioned U.S. Navy steamers layered before scrapping, 1965. Photo by Wikimedia Commons
Cracking of structures became the main problem during operation. Cracks appeared in the hulls and decks, and in some cases this led to the death of the ship. It was found that when operating at low temperatures, the steel body parts in the area lose strength next to the welded seams. Because of this, invisible cracks appear and spread, which can lead to accidents and even crashes. Overload, wave loads and other factors increased the risk of cracking.

To prevent damage and collapse, a number of structural elements were redesigned to eliminate potential cracking points. At the same time, a radical restructuring of the vessel was not provided. During the war, more than 1500 steamers faced the problem of cracking, but thanks to timely measures, only 3 were lost.

Another consequence of the simplified design was a limited resource. By the end of 1945, more than 2400 ships remained in service, and soon the United States began to sell them to everyone - private and state structures, incl. foreign. As the resource depleted, the steamers were decommissioned and decommissioned. The overwhelming majority of such ships completed their service by the mid-sixties. The US Navy abandoned the last representatives of the project by 1970. Even regular repairs and modernizations did not allow to extend the service life and compete with newer ships. 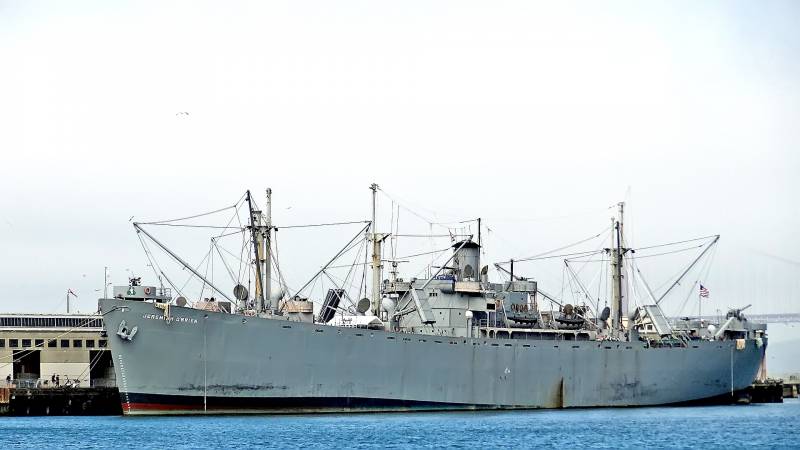 One of the surviving transports is SS Jeremiah O'Brien. Photo Wikimedia Commons

The main result of the EC2-S-C1 / Liberty project was the construction of more than 2,7 thousand auxiliary vessels fleet for allied countries. With their help, a highly efficient logistics system was built, which made a significant contribution to the victory over the Axis countries. After the war, Liberty significantly influenced the development of civilian transportation.

During the development and construction of mass sea transport, new technologies for the American industry were mastered and worked out, and at the same time already known solutions were perfected. The technical, technological and organizational experience gained during the construction of the Liberty has been applied in the following projects of merchant ships developed in a number of countries.

Thus, the course towards simplification and cost reduction has fully justified itself. It allowed to solve topical issues of the pre-war and war period, and also created a foundation for further development. Thanks to this, the EC2 project and its variants occupy a special place in stories shipbuilding.