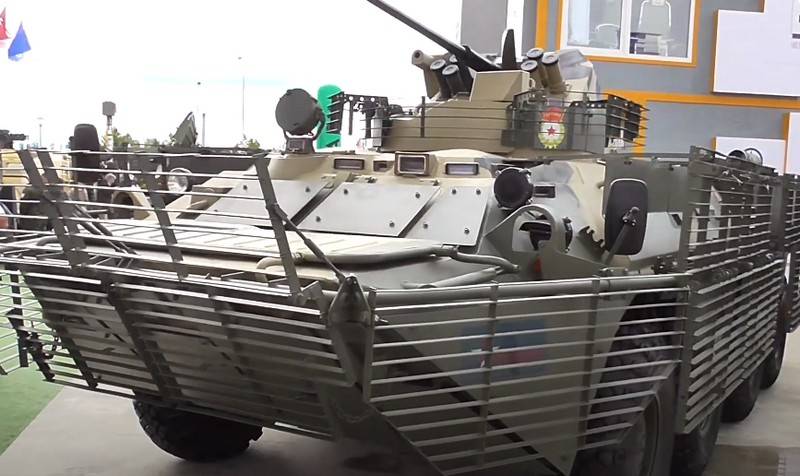 All new armored personnel carriers and infantry fighting vehicles entering the troops from this year will necessarily receive additional protection in the form of lattice screens and armor shields. Reported by "News" citing sources in the Ministry of Defense and the military-industrial complex.


According to the publication, the decision to equip armored personnel carriers and infantry fighting vehicles with additional protection was made at the end of last year following a study of the experience of using armored vehicles in combat conditions in Syria. The first batches of armored vehicles with enhanced protection have already arrived at the units of the Southern and Western military districts. Currently, the issue of equipping armored personnel carriers and infantry fighting vehicles is being decided.

Two types of additional protection are installed on armored vehicles: firstly, these are armor plates, which reinforce the vulnerable spots of the equipment - the sides, the base of the tower, etc., and, secondly, lattice screens installed around the perimeter. If necessary, the installation and dismantling of additional protection by the crew takes less than an hour. In peacetime, such protection is not required, since it significantly expands the dimensions of the machine and makes it difficult to use it in forest areas or in settlements.

It is stated that the combined screens protect armored personnel carriers and infantry fighting vehicles from 7,62 mm and 12,6 mm bullets at distances of 400 m or more and with a probability of about 50% can protect against anti-tank grenades and missiles.

The Ministry of Defense notes that in recent years, wearable anti-tank weapons are increasingly used in armed conflicts. Their concentration among illegal armed groups is very high. Additional protection of armored vehicles is vital for the protection of military personnel.

Ctrl Enter
Noticed oshЫbku Highlight text and press. Ctrl + Enter
We are
Reports from the militia of New Russia for 3 September 2014 of the yearArmored Vehicles Market in the Middle East in 2005-2012 and forecast for 2013-2016
43 comments
Information
Dear reader, to leave comments on the publication, you must to register.