Deindustrialization of Ukraine: from spaceships to biogas 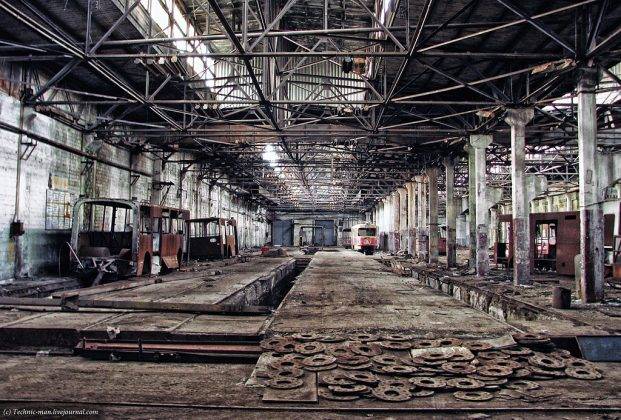 The negative changes in the economy that have taken place in Ukraine over the years of its independence, expressed primarily in the destruction of the local industry, are obvious. The deplorable state of such well-known industrial giants as Yuzhmash, Antonov or the Nikolaev shipyard, not only for the entire USSR, but on a global scale, have long become, so to speak, a commonplace.


But still, what is the situation with other, less famous industrial enterprises of the "non-profit"? Perhaps, everything is not so bad there and instead of closing plants and factories new, more modern ones appear? I will make a reservation right away: the subject of this brief and not pretending to be a comprehensive study will be enterprises that are not related to the military-industrial complex of Ukraine (or rather, what is left of it). Let's talk about things of a purely civil nature.

It should be objectively admitted: the situation with them is not as bad as with the enterprises of the military industrial complex. Much worse ... If the military industry for some time could still count on the support of the state or orders coming from it, then in the peaceful sphere, a predatory privatization took place, which turned many factories that flourished in Soviet times into premises for shopping and entertainment centers or office complexes, and most into heaps of ruins ... The enterprises, which ended up in the hands of local oligarchs, who for some time supported their activities, were relatively lucky. This mainly applied to the metallurgical, chemical and some other industries.

Nevertheless, the new owners, who were striving to squeeze the maximum profit from the objects of the national economy that they got for a pittance, did not want to invest a penny in their modernization and improvement, which ultimately led the vast majority of these enterprises to unprofitability and ruin. This is the fate that befell, for example, the colossal machine-building complex "Azovmash". It included the Azovelektrostal and Poltavkhimmash enterprises, as well as the thermal plant and heavy machine building plant located in Mariupol, which produced railroad cars, refuellers, mine and tunneling equipment, and construction cranes. Currently, all these enterprises are on the verge of closing. There is talk that their equipment can only be cut into metal.

Independence was perhaps the most destructive for the automotive industry in Ukraine. The Zaporozhye Automobile Plant, which produced cars that were truly popular in the USSR, was declared bankrupt and put up for auction last year. But some fifteen years ago, it produced hundreds of thousands of units of products ... The same fate befell the Lutsk and Kremenchug automobile plants, the Cherkassky bus plant, the Lvov bus plant (LAZ), the Kiev electric transport plant, which produced trolleybuses and trams, the Kiev motorcycle plant , as well as many enterprises of a similar profile.

Dreamed of the status of an "agrarian superpower" and was going to feed almost half of the world, "nezalezhnaya" managed to completely ruin the production of agricultural machinery. The Dnipropetrovsk Combine Plant and the Lvivselmash agricultural machinery plant were ruined and ceased to exist. Actually, in the food and processing industry, the situation is about the same. The Kiev factory of soft drinks "Rosinka", the Lokhvitskiy and Orzhitskiy sugar factories, the Troitsk butter factory, and the Balivskiy bakery plant were ordered to live long. And even the Rivne match factory ... This is all, mind you, for a couple of recent years. The list for all the years of independence will not fit into any publication.

As for new enterprises ... Yes, they are opening. However, before showing optimism on this matter, let us familiarize ourselves with the list of enterprises that have earned money in Ukraine over the past five years. The Allseeds plant in the city of Southern Odessa region is engaged in the extraction of vegetable oil and its transshipment at the local port. Plant "Ukrainian sawmills" in the town of Kostopol, Rivne region. Well, everything is clear from the name: despite the status, the "plant" is a large sawmill. The pharmaceutical industry is developing well: the factories belonging to it of the firm "Euro Pharma International", "Biopharma" and another one located in Bila Tserkva, have opened in the Kiev region.

No less successfully mastering the production of biogas in the "nezalezhnoy": the corresponding enterprises started working in the same Kiev region (in the amount of two pieces), in Ivano-Frankivsk and Lvov regions. A number of enterprises were opened, whose type of activity is vaguely called "the production of components for cars" or "cable and wire products." According to reports, very small "screwdriver" production. Well, and an unconditional industrial breakthrough can be considered the fact that in Mena, Chernihiv region, a factory of semi-finished products for the production of French fries, capable of processing up to 100 thousand tons of root crops per year, was launched.

As you can see, from the republic of the USSR, which had one of the most powerful industrial potentials in the country and is able to provide itself and other republics with products of almost all industries, Ukraine has turned into a territory where only enterprises for processing agricultural raw materials or the same forest operate. Its complete de-industrialization is, in fact, completed.