Why Moscow refused to fight for Mars 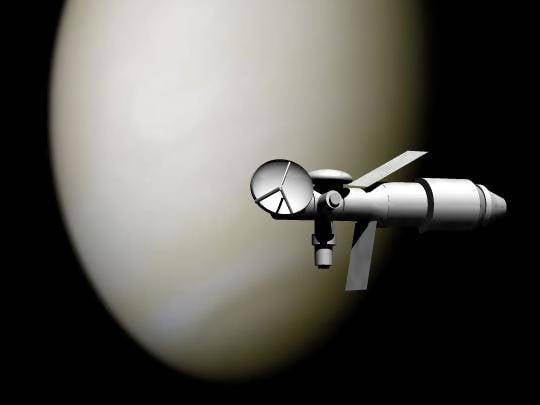 Heavy interplanetary ship as seen by the artist

The mission to Mars could have been the salvation of Soviet civilization. However, for the sake of "stability" and a consumerist "golden age", the Kremlin has abandoned its thrust into the future, toward the stars, and from winning the Cold War.

In the Soviet Union, the first variants of spacecraft for an expedition to Mars were first considered in 1959 at Korolev's OKB-1. The project of a heavy interplanetary ship was created by two groups of engineers: the first was led by Gleb Maksimov, and the second - by Konstantin Feoktistov.

In 1960, a group of developers led by Feoktistov proposed a project for a Martian expedition. It included a heavy main ship, five descent vehicles of a segment-conical shape, from which an expedition train on large inflated wheels was assembled on Mars. Five large self-propelled platforms: a flight deck, a platform carrying an aircraft, two platforms carrying the main and spare rockets to return the three Soviet cosmonauts to orbit, and the last platform carrying a nuclear power plant. The expedition was supposed to study the Red Planet for a year. The information was transmitted to the main ship, and he would relay it to Earth. Soviet researchers planned to use electric jet engines, which are highly economical, thanks to which it was possible to reduce the launch mass or increase the flight mass.

It must be said that K. Feoktistov was a unique personality characteristic of that great era. A participant in the Great Patriotic War, a military intelligence officer, he was captured, miraculously survived. He dreamed of creating spaceships and interplanetary flights. In 1949 he graduated from the Moscow Higher Technical School. N.E.Bauman (MVTU). He worked at a research institute together with a designer in the field of rocketry Mikhail Tikhonravov. Later he worked with him in the "Special Design Bureau No. 1" together with Sergey Korolev. Participant in the development of the first artificial Earth satellite, spacecraft Vostok, Soyuz and Progress, orbital stations Salyut and Mir. Pilot-cosmonaut, in 1964 he made a space flight on the Voskhod spacecraft, in the development of which he participated himself. He became the first civilian cosmonaut. Hero of the Soviet Union.

Maximov's project involved the creation of a heavy 75-ton ship and a rocket unit designed to accelerate an expeditionary vehicle with three pilots on board. The power of the heavy Martian spacecraft (TMK) was provided by a compact nuclear reactor. Food and oxygen for the crew were produced by the original greenhouse with chlorella algae. In flight, the spacecraft rotated around its axis, providing the astronauts with artificial gravity. Maximov's project did not provide for the landing of the crew on the surface of the god of war planet.

The Soviet Union then rushed to the Red Planet. The Russians were supposed to be the first on Mars. In June 1960, the CPSU Central Committee and the USSR Council of Ministers set the launch day - June 8, 1971, with a return to Earth on June 10, 1974. It is clear that the first projects of Maksimov and Feoktistov were too daring and grandiose. They would later develop simplified designs. Maximov's group will develop the Mavr project (a flight to Mars with a passing flyby of Venus), Feoktistov's group - the Aelita plan. 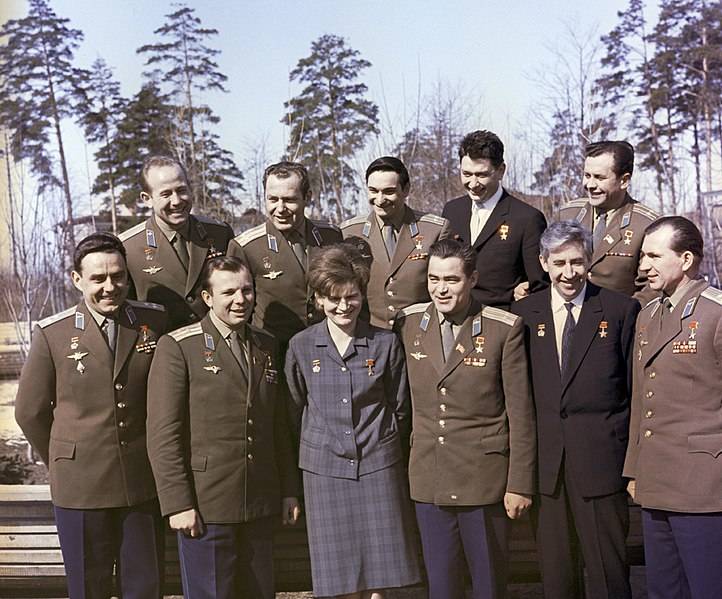 Konstantin Feoktistov (second from the right in the front row) with other Soviet cosmonauts. July 1, 1965

The lunar race has pushed back flight plans to Mars for a while. But they returned to them. After the Americans were the first to fly around the moon in 1968 and landed on it in 1969 (or skillfully imitated the landing), Moscow decided that it was necessary to return to the Martian expedition. In May 1969, V. Mishin, who headed the Central Design Bureau of Experimental Mechanical Engineering (TsKBEM) after the death of Korolev, signed a preliminary design of the N-1M rocket and space system. There were considered ways to modernize the base carrier for the sake of significantly expanding its capabilities and projects for creating new ships for flights to the Moon and planets of the solar system.

The project of the Martian expeditionary complex (MEC) by Feoktistov was recognized as successful. The six-seater ship was supposed to make an expedition to Mars and back in 630 days. And the lander with three cosmonauts will stay on the Red Planet for 5 days. The MEK consisted of an interplanetary spacecraft weighing 60 tons, a landing module of 50 tons, and a vehicle with a mass of 8,6 tons to be returned to Earth. The ship used an onboard nuclear reactor, electro-jet and auxiliary liquid-jet engines. The two-hundred-meter MEK was going to be built in space by docking two unmanned units weighing 150 tons each in Earth's orbit, which were launched into space by the H-1M carriers. The total length of the ship reached 128 meters. The first block is the Martian Orbital Complex (MOC) and the Martian Landing Complex (IPC); the second is a nuclear installation and electric propulsion engines (ERE). After the docking of the blocks, under the action of the thrust of the ERE, the ship began to accelerate along a gradually unwinding spiral. After the spacecraft left the Earth's radiation belts, they were going to deliver the crew to MEK using the "lunar" ships of the 7K-L1 type, which had rendezvous and docking facilities in high orbit. It was planned to launch them on the flight trajectory using the Proton launch vehicle with the D upper stage.

At the same time, having lost hope of success in the lunar race, another famous designer, Vladimir Chelomey, decided to become the first on Mars. On June 30, 1969, order No. 232 of the Minister of General Machine Building S. A. Afanasyev was issued on the development of the Aelita project. According to it, the development of the project for the UR-700M launch vehicle and the MK-700 Martian spacecraft began. Studies have shown that the use of the UR-700 rocket will delay the assembly time, since 10 launches of this rocket are required. The much heavier version of the UR-700M required only two launches.

Cancellation of an expedition to Mars

However, at the same time, the Kremlin decided that the effect of the impact of the first man's flight on the Red Planet on world public opinion would be too small in comparison with the material costs. According to various estimates, a manned flight to Mars would have cost the country 30-40 billion rubles, which is almost an order of magnitude higher than the cost of the lunar program H1-L3. In 1974, the N-1 development program was closed, and with it the development of the Martian expedition was completed.

According to the Russian scientist and historian Andrey Fursov, large-scale space programs of both the USSR and the United States were dangerous for the world elite. Therefore, they were gradually phased out, leaving mainly small scientific projects, the military and commercial sectors. A breakthrough in space created a powerful layer of scientific and technical elite on the planet and led to the creation of a new society of creation, which was a threat to the world financial plutocracy and the consumer society. In the USSR, after the successive liquidation of the Stalinist project, the nomenklatura took a course towards "stabilization" and normalization of relations with the West, refusing to develop and leap towards the stars. What became the basis for the gradual decay and subsequent catastrophe of Soviet civilization.

As a result, Moscow itself abandoned the possible scenario of winning the big game. The success of the Soviet Martian expedition would have dealt a fatal blow to the United States, thereby ensuring the Russians' victory in the Cold War. Russia would give humanity a dream, an opportunity to grow. But someone preferred to grow fat and degrade ... The costs of space exploration would justify themselves, and many times over. It was easy to find the funds: to save on the issue tanks and aircraft (there were plenty of them); curtail the appetites of various African kings, "socialist builders" whom the Kremlin enthusiastically helped, and so on. To fend off the Russians' success on Mars, the United States would have to create an inhabited base on the Moon or fly to Jupiter.

If the Soviet Union were the first to be on Mars, then humanity would be able to get out of the dead end of capitalism, the Western degradation-parasitic model of society. To respond to probable Soviet success, America would have to dramatically increase spending on space and science, education and advanced industries. The Western elite would have to abandon the course of degradation of culture, society and education, which began in the 60s. We would have had to cut the appropriations for the arms race at our bases around the world. Develop hundreds and thousands of technologies needed for the space program, not just computers and mobile communications. Refuse wild spending on entertainment (in fact, decomposition). To rebuild their economy on a planned, in essence, socialist basis, to cut the overconsumption of the rich, to take away most of their private profits. That is, the West would have to copy the Soviet development model in order to survive.

A new scientific and technological revolution would create a powerful creative production class (elite). In the process of preparing an expedition to Mars and other planets, many new technologies would appear. In particular, even then a new carbon-free power industry would have been born - based on hydrogen fuel cells, compact nuclear reactors and solar batteries. It is possible that on other physical principles. New materials, medicines, technologies for obtaining clean water and food, autonomous life support systems, energy saving would appear.

Thus, socialism would triumph on the planet. In society, the first place would be not capital and money, but knowledge and skills. The society that Stalin built would have taken the upper hand: a society of service, creation and knowledge. The main thing in such a society would be not an oligarch-capitalist or a bureaucrat, but a creator-scientist, designer, engineer and teacher. A powerful creative impulse would give new life to the entire planet, unleash creativity, break the old economy and system. The very foundation of capitalism would disappear — the distribution of resources and benefits in favor of a handful of “chosen ones”. Energy sources would be inexhaustible and environmentally friendly, the production of living goods would be extremely cheap. The world of capitalist predators and marauders, the world of globalization and slavery, hedonism and degeneration would be doomed to death. And the Russians, with their incredible ability to create, creativity and risk, with their colossal creative energy, would become complete and final winners!

However, such exciting prospects were dangerous not only for the western elite, but also for the decrepit Soviet nomenklatura. The Kremlin has given up its thrust into the future, towards the stars, and from winning the Cold War for the sake of "stability" and a consumerist "golden age."

The money was burned in the construction of thousands of guns, tanks and aircraft (which ultimately did not save the USSR) to help "friendly" regimes in Africa and Asia. Astronautics has become ordinary, philistine, without expeditions to other planets. Moscow, abandoning its space mission, gave the United States the opportunity to win in 1991 and prolong the existence of the Western "golden billion". The West plundered the Soviet Union and the countries of the socialist bloc, postponing its next systemic crisis for a decade. And humanity found itself in a dead end of the western (now global) development model.

Ctrl Enter
Noticed oshЫbku Highlight text and press. Ctrl + Enter
We are
EMRO about Russian nationalism and national movement I.I. StrelkovaList of destroyed the largest and most high-tech enterprises
122 comments
Information
Dear reader, to leave comments on the publication, you must to register.