Russia's economic enclave: a new phase in relations with Syria 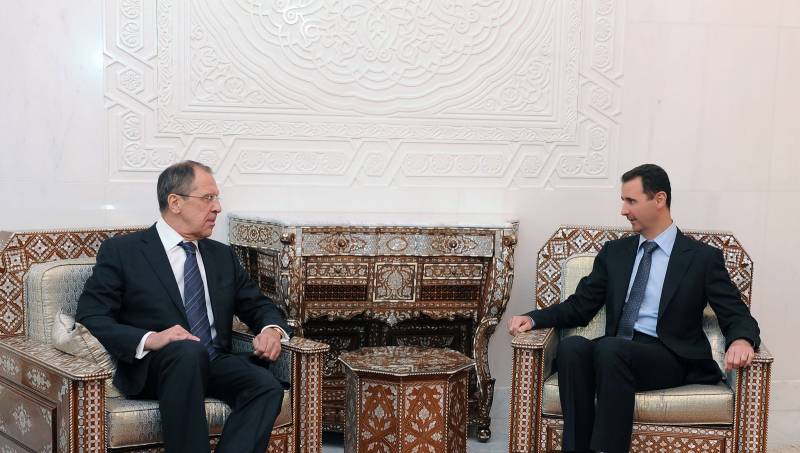 On a peaceful track

In recent years, the main news the summary related to Syria was a chronicle of hostilities, interspersed with clashes between numerous troops of third countries. President Putin also visited the country, but his visits usually had a military-political connotation.

On September 7, unexpectedly (and only for a few hours), a delegation headed by Foreign Minister Sergeev Lavrov and Deputy Prime Minister Yuri Borisov arrived in Damascus. It is noteworthy that for Lavrov this is the first visit in nine years to the Syrian Arab Republic. If the presence of Yuri Borisov in the delegation is explained by the further development of military cooperation between the two countries, then the "peaceful" Lavrov, of course, arrived with a completely different mission. 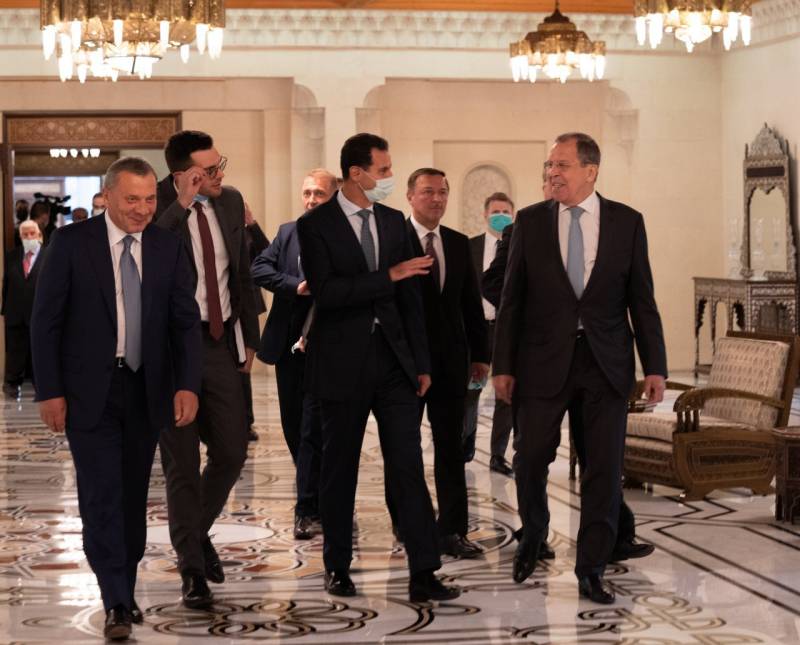 Visit of the Russian delegation to Damascus. September 7, 2020. Source: rossaprimavera.ru
Russia is entering a new phase of relations with Syria, the basis of which is being laid by the September visit of a delegation of high-ranking Russian officials. Military actions in the country, if they do not end, then pass into a sluggish phase, which makes one think about the forthcoming peaceful construction. The long-term war, passing from civil to national liberation, left thousands of settlements with destroyed infrastructure and destroyed housing stock. The Assad government has to work under the yoke of the consequences of the COVID-19 pandemic and international sanctions. In fact, only Russia and Iran have at least some opportunity and desire to provide economic assistance to Damascus. It should not be forgotten that these countries too are under quite serious sectional pressure.

A separate figure in stories the United States is acting, which has once again strained relations by signing the so-called Caesar law. He, of course, does not in any way refer to the ruler of the Roman Empire. The law is dedicated to a certain photojournalist who took out photographic evidence of torture and murder in local prisons from Syria. This legislative act came into force on June 17 and is directed against “those responsible for the mass death of civilians and numerous atrocities, including the use of chemical weapons and other barbaric weapons. " Now any company, including a Russian one, wishing to cooperate with official Damascus runs the risk of falling under tough sanctions from Washington. It seems that only companies that are already under US sanctions can feel more or less free. Every year there are more of them, so Syria still has a chance for an economic recovery.

Against a similar economic and political background, the Russian delegation met with the top officials of Syria. In this regard, economic negotiations took up a considerable part of the agenda. Yuri Borisov summed up at the briefing:

"The new agreement, which we are working on, aims to restore about forty facilities, including the energy infrastructure. In particular, this is a cascade of hydroelectric power plants, which were built by Soviet specialists at one time, and the resumption of production of offshore fields. Agreement with one of the operators already signed and awaiting ratification. "
For reference: this year marks 76 years of diplomatic relations between Syria and Russia (USSR), and this situation largely repeats the long history of relations between the two states. The most tangible results of Russian-Syrian cooperation have been achieved in the technical, scientific and educational spheres: the Euphrates hydroelectric complex, more than 80 large industrial facilities have been built, thousands of kilometers of railways and power transmission lines have been laid. More than 35 thousand Syrians have received education in Soviet and Russian universities, annually over 100 people are sent to study in Russia. Thus, the mission of Borisov and Lavrov is in many ways the successor to Soviet foreign policy. A certain obstacle, in addition to the above, is the actual blockade of the main oil-bearing provinces by the US occupation forces and Kursk formations. As a result, a country that previously exported hydrocarbons is now forced to purchase them abroad. The situation is similar with wheat, which Syria has been rich in since ancient times. Despite such rhetoric of Russia, everyone understands perfectly well that without softening the position of the West, a full recovery of the country's economy cannot be expected.

All hope for the work of the Constitutional Committee. This is the motto that can characterize attempts at political reforms for the government of Bashar al-Assad. The president's situation is generally unenviable. On the one hand, without the support of Russia, he will not hold his post, and on the other, there is hope that at least some of the sanctions will be lifted. One of the demands of the West was a dialogue with opposition groups and the initiation of constitutional reform. The main settlement body in 2018 in Sochi was the Constitutional Committee, located in Geneva. It included 15 representatives of the Syrian authorities, 15 members of the opposition Syrian negotiating commission and 15 more representatives of the Syrian civil society. For a long time, the Committee "stood idle", and only on August 24 of this year resumed its work under the auspices of the UN. Supporters of democratic transformations in Syria, including Russia, undoubtedly, pin their main hopes on his work.

In case of failure of the work of the Constitutional Committee, Moscow will have to rebuild Syria de facto alone, and for this there is no money or special desire. The destroyed country will remain a hotbed of terrorist threats for a long time to come, eating up considerable resources of Russia. If the constitutional reforms are successful, some of the restrictions, including trade restrictions, will be removed from Damascus, and cooperation between Russia and the republic will become quite mutually beneficial. 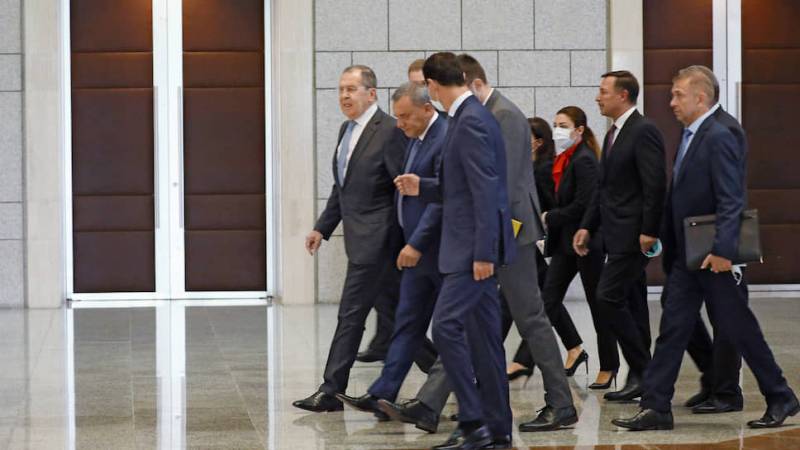 Source: kommersant.ru
But it seems that power for the Assad regime is more important than structural changes in society and political reforms. Damascus has recently not found a common language with the opposition within the Constitutional Committee, which has already begun to irritate Russia. In addition, the National Will Party and the Democratic Forces of Syria in Moscow signed an agreement on a new constitution aimed at decentralizing power in the country. Russia, the main arbiter in this situation, supported the coalition of the two parties. However, Bashar al-Assad, assessing the prospects of losing his own monopoly on power, refused to approve the agreement.

And now it is not even clear whether the near-Syrian reformers will have time to agree on a new constitution before the presidential elections in 2021, after which Assad will clearly be less accommodating. Walid Muallem, the Syrian Foreign Minister, generally stumped everyone, pointing out that no new initiatives by the National Will Party and the Syrian Democratic Forces will be accepted if they contradict the current constitution. That is, no new constitution, since it contradicts the current Basic Law of the state!

The vicious circle, which, obviously, was supposed to be resolved by the mission of Russian officials of the highest rank. With the usual tactfulness of the Foreign Minister, Sergei Lavrov, in response to Western demands to accelerate the process of political reforms, said:

"There is no time frame for the work of the Syrian Constitutional Committee and there cannot be."
A new stage in the development of relations between Russia and Syria has obviously already begun. The terrorist underground, suppressed with the help of the Russian Aerospace Forces and special forces, is becoming less and less distracting. And there is an opportunity to concentrate on the pressing problems of peaceful construction.

Damascus, obviously, believes that Russia, like the USSR in its time, will irretrievably invest billions in the country's economy - for the sake of the loyalty of the leadership. But Moscow has a completely pragmatic approach: a peaceful political settlement, according to the Kremlin, is possible only after the softening of the regime of Bashar al-Assad and a dialogue with an adequate opposition. How much this will be possible depends on the diplomatic skill of Sergei Lavrov and the potential of the Russian Aerospace Forces.

Ctrl Enter
Noticed oshЫbku Highlight text and press. Ctrl + Enter
We are
Situational analysis of the death of the MH17 flight (Malaysian Boeing 777), made on the basis of engineering analysis from 15.08.2014Syria: Americans scare themselves, and Asma Asad buys chairs
81 comment
Information
Dear reader, to leave comments on the publication, you must to register.