Chinese press: The use of the Okhotnik UAV fully complies with the concept of future wars 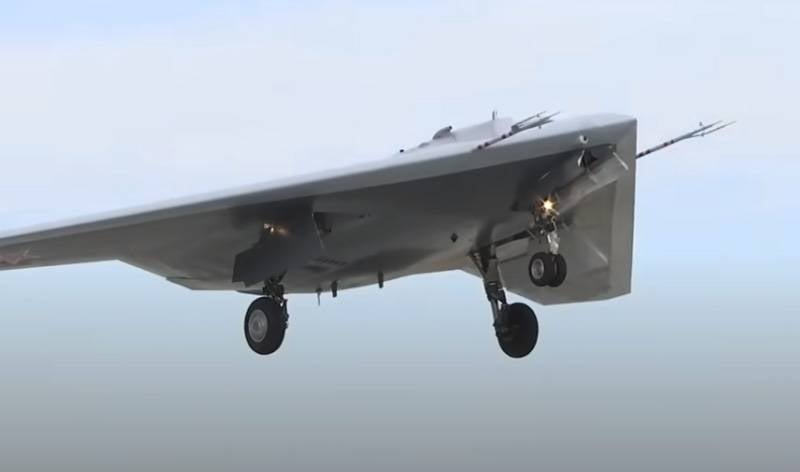 A few days ago, a statement was made by Lieutenant General Sergei Dronov, Commander of the Air Force, Deputy Chief of the Russian Aerospace Forces, that heavy attack drones would begin to enter the troops in 2021. The information mouthpiece of the Communist Party of China, the People's Daily, drew attention to this statement.


The publication notes that today the arms race between the leading powers is unfolding in a number of areas, among which one of the most priority is the creation aviation drones. At the same time, People's Daily asked the question of what the Russian general was guided by when he made a statement about the imminent introduction of a heavy multipurpose strike UAV into service with the Russian Aerospace Forces?

Further, trying to answer this question, the Chinese authors consider an example of the Okhotnik UAV being tested in Russia, which is being developed according to the S-70 project. People's Daily notes that the development of a heavy drone in Russia has been going on for many years. The reference point is the "Skat" - a 10-ton unmanned aerial vehicle with a practical ceiling of 12 km. It was noted that the development of the "Skat" faced numerous difficulties, but in the end it allowed to accumulate important experience, to implement the technological developments that are currently used to implement the UAV "Okhotnik" project.

Chinese observers point out that the newest Russian heavy drone is not only a strike drone, it also combines intelligence functions.

At the same time, the greatest attention in the Chinese press is drawn to the possibility of using the Russian "Hunter" in a network-centric operation - when it is used in conjunction with combat aircraft, including 5th generation fighters. As an example, its tests are given, when the UAV was lifted into the air in tandem with the Su-57 fighter.

Technologies have made it possible to combine the "Okhotnik" and the Su-57 into a single system for performing combat missions. At the same time, the fighter is able to obtain information about targets without entering the enemy's air defense zone. This allows for a strike with minimal risk to both the fighter and the drone.
It is noted that the use of new Russian engines, the Al-41F, will improve the Russian drone, which will increase such an indicator as the thrust-to-weight ratio.

The use of such a drone with the release of human resources is fully consistent with the concept of future wars. There is no need to calculate the loads on the pilot's body when maneuvering, you can not use the life support system. Instead, the aircraft will take more on board. weapons and fuel. This will increase both the radius of its combat use (according to preliminary data, it is over 4 thousand km), and its combat power.
Ctrl Enter
Noticed oshЫbku Highlight text and press. Ctrl + Enter
We are
Reports from the militia of New Russia for 27-28 September 2014 of the yearInterview of Vladimir Putin with Radio Europe-1 and TF1
42 comments
Information
Dear reader, to leave comments on the publication, you must to register.