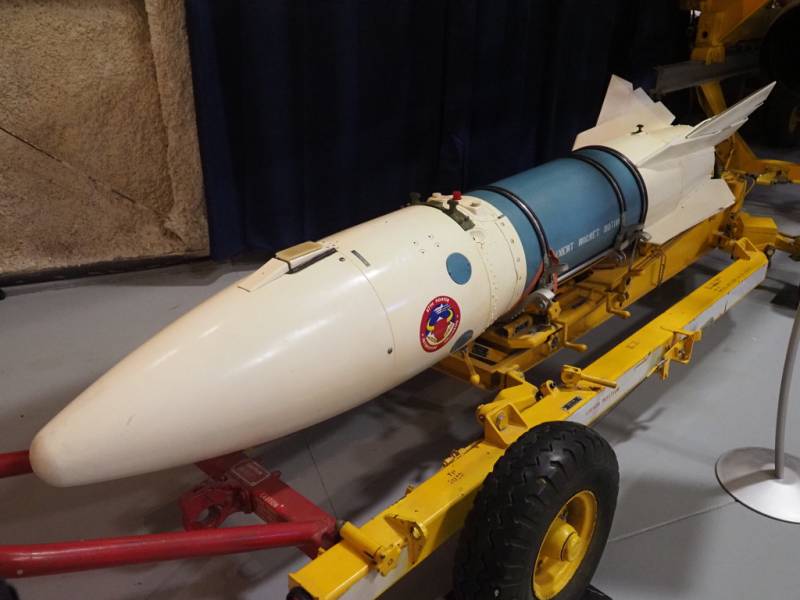 In the early years, the development of air-to-air missiles faced serious technological constraints, which led to the need to find alternative solutions. One of the most interesting results of such processes was the Douglas MB-1 / AIR-2 Genie rocket, developed for the US Air Force. It was an unguided missile with a nuclear warhead - one of a kind.

By the mid-fifties, the USSR had accumulated significant nuclear arsenals and created aircraft to deliver ammunition to targets in the United States. The American Air Force was actively working on various methods of countering a possible raid, but not all of them could show the required effectiveness.

The most promising were considered aviation air-to-air missiles, but the development of homing heads for them faced all sorts of difficulties. The consequence of this was the proposal to use warheads of increased power, capable of compensating for a miss. A compact but powerful enough nuclear charge could show high efficiency when firing at bombers. In theory, he even allowed the GOS to be dispensed with.

In 1954, Douglas Aircraft began working on the appearance of a promising aircraft missile, designed specifically to combat Soviet bombers. In order to speed up the work, it was proposed to use the simplest components and devices, abandoning the development of complex new products. 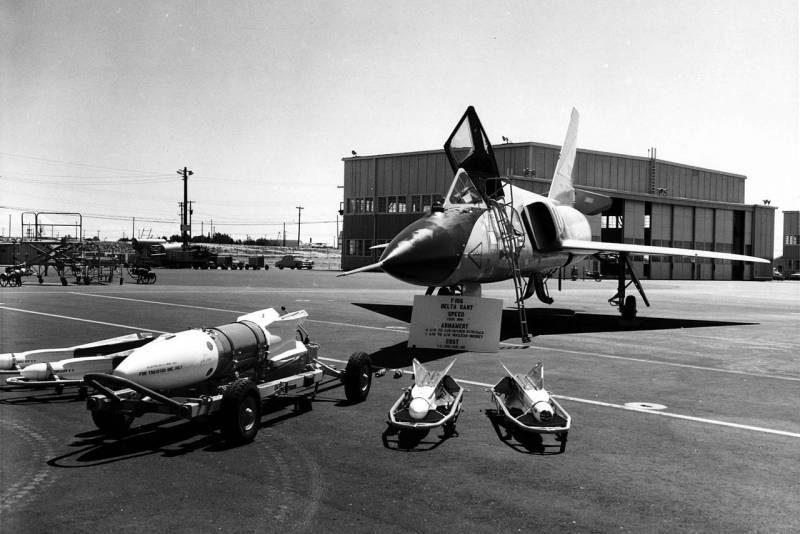 F-106 and its weapons. The largest product is the Genie rocket. Photo USAF
At the preliminary study stage, the new project had several working designations - Bird Dog, Ding Dong and High Card. Later the MB-1 index and the name Genie appeared. In the early sixties, the Air Force introduced a new weapon designation system, and the MB-1 missile changed its name to AIR-2. Its modifications were renamed accordingly.

The proposed appearance of a promising rocket combined simplicity and boldness. Provided for the construction of unguided ammunition with a solid propellant engine and a low-power nuclear warhead. It was assumed that the radius of destruction of the warhead would be sufficient to compensate for a possible deviation from the line of sight and could ensure the defeat of several bombers in one formation.

The MB-1 received a cylindrical body with an ogival head. X-shaped stabilizers were placed in the tail of the hull. The plane consisted of a fixed root piece and a retractable console. The stabilizers were characterized by low elongation and a broken leading edge with a large sweep. The internal volumes of the hull were given under the warhead, the units associated with it and the engine. The rocket had a length of 2,95 m with a body diameter of 445 mm. The launch weight is 373 kg.

A Thiokol SR49-TC-1 solid-fuel engine with a thrust of 16350 kgf was placed in the tail of the rocket. With its help, the product could reach speeds up to M = 3,3 and fly about 6 miles (less than 10 km). Maneuvering in flight was ruled out, but the stabilizers had to ensure that it was kept on a given trajectory. 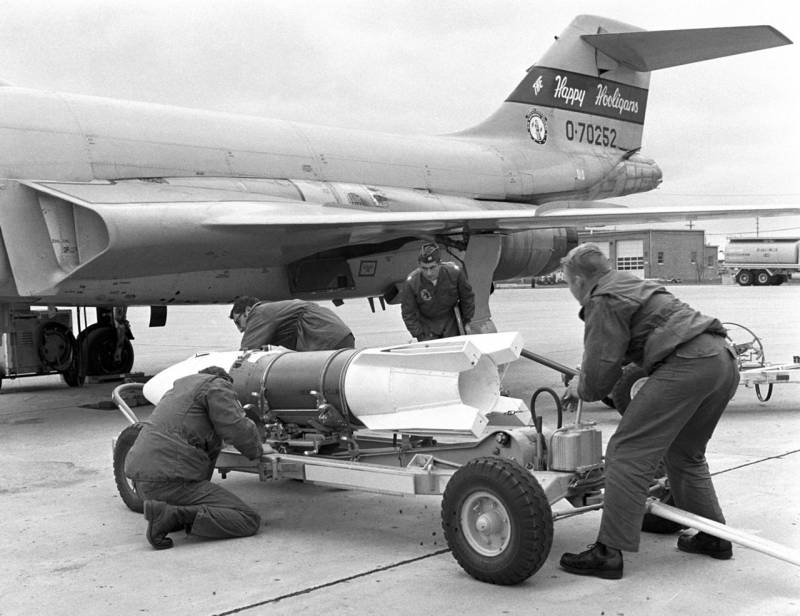 Preparing for the flight of the F-101 fighter. Photo USAF
Under the Gini's fairing was a W25-type nuclear warhead designed specifically for this missile. The warhead had a length of 680 mm and a diameter of 440 mm, weight - approx. 100 kg. Used a combined charge based on uranium and plutonium, placed in a sealed enclosure. Estimated blasting power - 1,5 kt TNT. This was enough for guaranteed destruction of air targets within a radius of 300 m and for a serious impact on more distant objects.

The W25 product was equipped with a remote fuse with several safety stages. The first stage was removed when the rocket was launched, the second after the engine burned out. During this time, the carrier plane had to move away from the danger zone. The detonation was carried out using a remote fuse at a pre-programmed point of the trajectory.

Several tactical aircraft of American design could become the carriers of the MB-1 Genie missile. In this role, the F-89 Scorpion, F-101 Voodoo, F-102 Delta Dagger, F-104 Starfighter and F-106 Delta Dart fighters and interceptors were considered. However, not all plans were implemented. So, a set of additional equipment was created for the F-102 fighter, but it did not enter service. For the suspension of the rocket on the F-104, a special device was used, which was notable for its complexity and was not widely used.

With the help of its equipment, the MB-1 carrier aircraft was supposed to determine the parameters of the group air target, as well as calculate the launch moment and the estimated range of the rocket. The necessary data were entered into the rocket equipment, after which the launch was carried out. Then the carrier fighter had to perform an evasive maneuver and leave the danger zone. 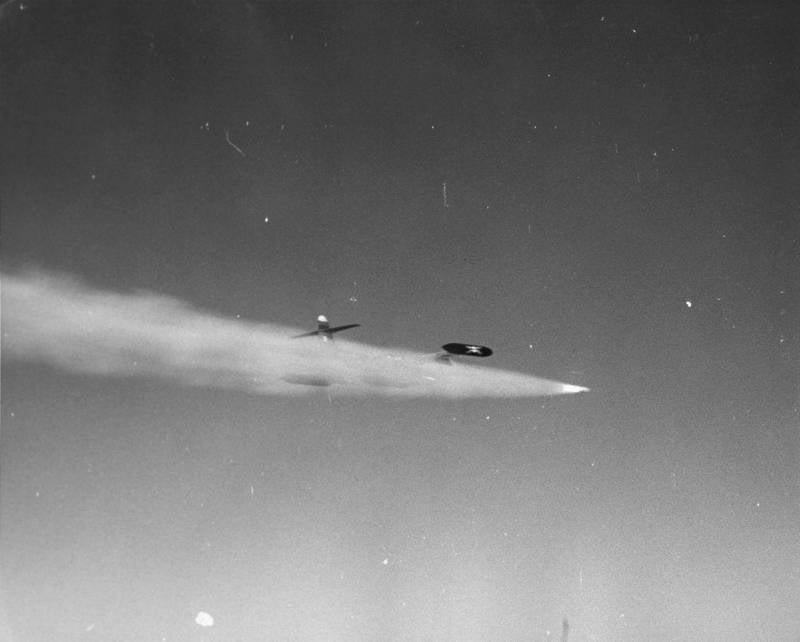 In 1956, the Douglas company conducted the first tests of an experimental missile with a warhead weight simulator. The rocket was distinguished by its simplicity, which made it possible to complete all checks and fine-tuning in just a few months. Already in the first months of 1957, an order was issued to adopt the MB-1 missile into service with the US Air Force.

It was noted that the new weapon has a number of positive features. The nuclear warhead provided destruction or damage to targets within a radius of several hundred meters. The missile's flight to its maximum range took only 10-12 seconds, which left the enemy no time to respond. The lack of any means of guidance made any countermeasures useless. In a real conflict, Genie missiles could make the most significant contribution to defending a country from attack. At the same time, the new weapon turned out to be not very easy to operate and use, and also quite dangerous for the carrier.

In the same 1957, the serial production of new missiles in several versions was launched. For combat use, they produced MB-1 products in full configuration. A training version of the MB-1-T rocket was also produced. Instead of a nuclear warhead, it carried a smoke charge that indicated the point of detonation.

Serial production of missiles continued until 1962. For several years, 3150 products in a combat configuration and several hundred training ones were produced. Such a reserve ensured the training of the flight personnel and the reflection of a possible strike, and it was decided to stop production. In addition, in the near future, the appearance of guided missiles with the required efficiency was expected - after that, unguided weapons could be abandoned. 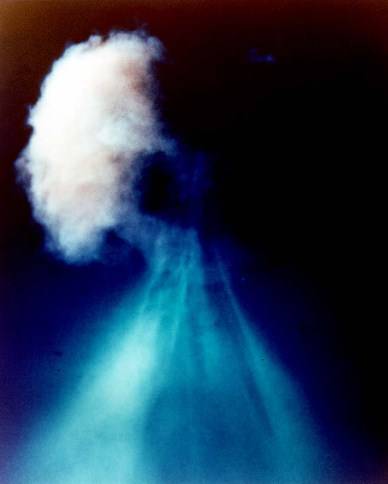 A cloud from a rocket detonation. Photo USAF
However, this did not exclude the need to modernize existing weapons. In the early sixties, an improved version of the MB-1 rocket was developed under the designation MMB-1. Its main difference was the engine with higher performance. The MMB-1 did not go into production, but the engine was used to upgrade the missiles in storage. Serial MB-1 / AIR-2A with a new engine and increased firing range were designated AIR-2B.

The main operator of the Genie missiles was the United States Air Force. They received the bulk of mass-produced missiles and had a large number of carrier aircraft. Also, such weapons were supplied to the Canadian Air Force as part of the nuclear exchange program. Canadian missiles were used by CF-101 Voodoo fighters. The British Air Force showed interest in American weapons. They planned to use imported rockets on Lightning aircraft, but this proposal never materialized.

Just a few months after the adoption of the MB-1 Genie rocket in a combat configuration, it was used in tests. On July 19, 1957, as part of Operation Plumbbob, a detonation with the code John took place. The US Air Force F-89J fighter, commanded by Captain Eric W. Hutchison and Captain Alfred S. Barbie, launched a rocket over a Nevada training ground. The explosion of the W25 product occurred at a height of approx. 5,5-6 km.

According to calculations, the detonation and radiation from it should not have a significant effect on ground objects. To confirm this, a group of five officers and a photographer in summer uniform were present under the blast point. The recording equipment confirmed that the damaging factors did not reach the ground. The carrier plane was not damaged either. He continued to serve in the Air Force, then ended up in the National Guard, and after being written off he became a monument to himself and the missiles. 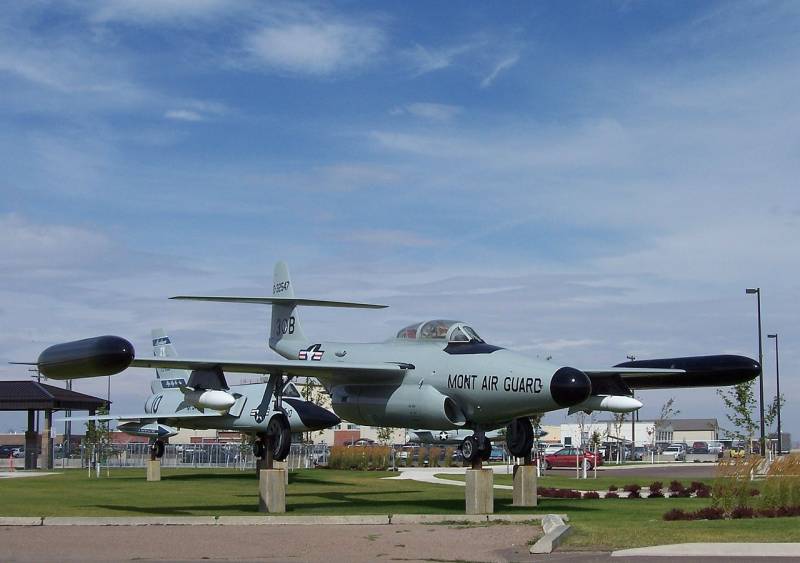 F-89J fighter with mock-ups of AIR-2A missiles. Photo Wikimedia Commons
Airplanes with nuclear unguided missiles took over duty and made a significant contribution to the air defense of the United States and Canada. In 1963, a new designation system was introduced, and the Gini continued to serve under a new name. The basic MB-1 was renamed AIR-2A, the modernized one - AIR-2B. The training version became known as the ATR-2A.

Despite the limited flight characteristics and relatively low accuracy, the MB-1 / AIR-2 missiles were considered a fairly effective and successful weapon for interceptor fighters, suitable for further operation. Already in the sixties, air defense fighters received new guided missile weapons, but they were in no hurry to abandon the unguided Genies. Conventional and nuclear missiles complemented each other.

The Canadian Air Force continued to operate AIR-2 missiles until 1984. The abandonment of such weapons was associated, first of all, with the obsolescence of the CF-101 carrier aircraft, and newer aviation technology could no longer use the existing nuclear missiles. Similar processes were observed in the US Air Force. By the mid-eighties, of all the AIR-2 carriers, only F-106 fighters remained in service. In 1988, they were removed from service, and with this the service of the Gini missiles ended.

As the storage periods expired, the AIR-2 missiles were decommissioned and disposed of. The last remnants of the arsenals went for dismantling in the early nineties. However, not all Genies were destroyed. About two dozen such items have lost their internal units and have become exhibits in various US museums. The F-89J fighter, which at one time performed the only training launch of a combat missile, also became curious historical exhibit.

The MB-1 / AIR-2 unguided nuclear air-to-air missile has been in service for about 30 years and has made a notable contribution to US air defense. At the time of its appearance, such a weapon was very effective and useful, but new technologies soon made its basic concept unpromising. And also made it possible to create a guided missile with nuclear equipment.

Ctrl Enter
Noticed oshЫbku Highlight text and press. Ctrl + Enter
We are
An-12 in AfghanistanMiG-21 in Afghanistan
6 comments
Information
Dear reader, to leave comments on the publication, you must to register.