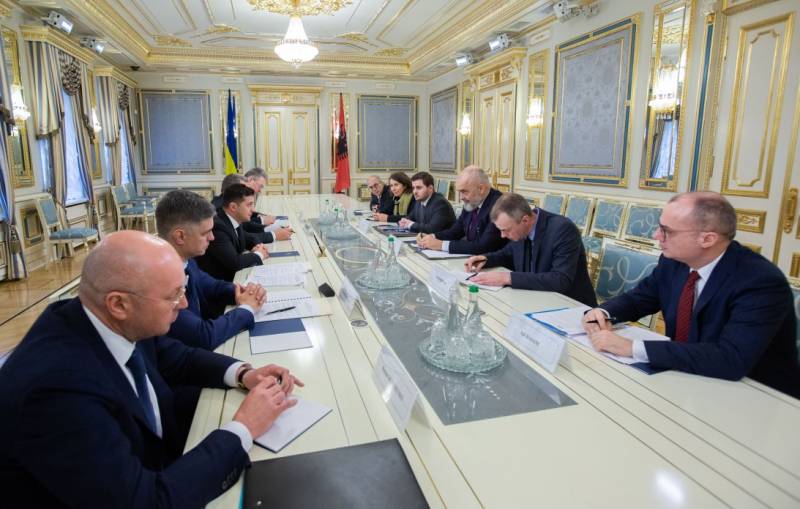 On September 14, President Zelenskiy approved the new National Security Strategy of Ukraine. On the one hand, the document legally states a complete rupture of political and military relations with Russia and its allies, and on the other hand, it clearly answers the question about the future fate of Donbass. Ukraine is completely "leaving" to the West.


For several years now, experts and political scientists have been arguing about the possibility of creating some other partnership, about achieving some kind of economic or political consensus between Ukraine and Russia. Alas, the National Security Service of Ukraine gives a clear answer: no partnership! Russia is just an aggressive neighbor, with whom it is necessary to fight for "the territorial integrity and independence of Ukraine."

Let's try to understand the document in more detail.

Ukraine seeks to join the EU, NATO and an alliance with the United States

Ukraine is a state that strives for peace, intends to restrain the manifestation of armed aggression against its country, to uphold territorial integrity and sovereignty, and also to maintain cooperation with the European Union, the United States and the North Atlantic Alliance.
I think that it is simply impossible to say more specifically than it is expressed in this quote. Very precise wording. If we translate this statement from the diplomatic-bureaucratic language into everyday language, it will become clear that the state does not abandon plans not only for a diplomatic, but also for a military solution to the contradictions existing in the East.

Today the idea of ​​"Ukrainian" Kuban, Rostov, Voronezh and other lands is popular. Taking this into account, modern Ukraine is actually declaring its own claims to these territories. It is clear that Ukraine cannot present a claim to Russia. The gut is too thin for a serious conversation with an eastern neighbor. Kiev is well aware of this. Therefore, they offer themselves as "meat" for the war between the West and the East. In fact, Ukraine is saying that it agrees to become a battlefield between Russia and NATO.

Basic principles of the new strategy

Defending the independence and sovereignty of the country. Restoring the territorial integrity of the state. Protection of the rights, freedoms and interests of all Ukrainian citizens. Integration into NATO and the European Union.

Three postulates of the new Ukrainian National Security Strategy are clearly visible behind the beautiful text. It seems to me that they are the cornerstones of the whole structure.

So, upholding independence and sovereignty. In fact, this means that Ukraine is preparing for a war with Russia and, possibly, if Lukashenko remains in power, with Belarus. It will be called like this: "development of the defense sphere" to "prevent armed aggression against Ukraine." In fact, Ukraine officially informs the "aggressors" that it is ready to fight and will fight for the interests of not only its own country, but also for the interests of the EU and NATO.

Further - the protection of the rights, freedoms and interests of citizens. This is nothing more than Ukraine's readiness to quickly adapt to changes in the political, military, or any other course of NATO and the United States. Simply put, Kiev agrees in advance to recognize any changes in the domestic or foreign policy of the EU, the US or NATO.

In diplomacy, this is called the stability of the state's course. But this means just a rejection of independence in favor of other countries. The people call this position differently. And the attitude towards people with such a position among the people is also appropriate.

And the third principle, expressed in the document: "integration into NATO and the European Union." It's enough just to repeat what is written above. We agree to fight for you to the last Ukrainian. A thinking person understands that for NATO the best option for a war would be a conflict in which its own armed forces would not directly participate in hostilities. Others must die. The Alliance, on the other hand, must make money from other people's blood.

There are no more Minsk agreements

At first glance, it looks somewhat strange that the Strategy does not contain a single mention of the Minsk agreements. There is the fact that Ukraine intends to return the occupied territories, but there is nothing about "Minsk". Is it strange? Not at all. For the first time, Ukraine has honestly shown its own attitude towards the Minsk agreements. It's just a piece of paper that doesn't mean anything for Kiev. By the way, this has long been discussed in Donbass.

The imitation of the ebullient activities of the Trilateral Contact Group (TCG) is just a procrastination for the Americans to decide. After the election of a new US president, it will become clear what the owner of the square will need. Hence the constant talk about the order of execution of the clauses of the agreements, about the elections in the Donbass, about the Russian army. Hence the loud statements about the unfairness of the Minsk agreements and the need to revise them.

Moreover, the Minsk agreements are a diplomatic way to solve the problem. The very peaceful path that everyone is talking about. Exactly. They speak in Russia, in the EU, in Ukraine, and in the Donbass. The National Security Service of Ukraine puts an end to all these conversations. Ukraine does not need the Minsk agreements, since they were signed by the vanquished, and the Ukrainians have long considered themselves victors.

This means that Kiev is going to solve the problem of Donbass by military means! The only limiting factor today is Russia's reaction. President Putin did not cancel his words about the fate of Ukraine's statehood in the event of active hostilities.

On the other hand, Russia has officially received another "angry dog" at its borders. Accordingly, Moscow will take the necessary steps for its own security. Moreover, it is clear that these steps will be aimed at ensuring a response to aggression in such a way as to eliminate the danger with one blow. And this blow will be directed not only at the troops on the front line ...

Are the games of curing the mentally ill over? Ukraine has taken its place along with Poland, the Baltic countries, the Czech Republic and others?

Alas, it seems to me, yes. Now we have, instead of a deceived people, a friend who must someday come to their senses, an enemy. Yes, this is another pug, but ... Hyenas also gather in flocks and then become dangerous even for lions.

Ctrl Enter
Noticed oshЫbku Highlight text and press. Ctrl + Enter
We are
Zelensky reigns, but not yet ruledSituational analysis of the death of the MH17 flight (Malaysian Boeing 777), made on the basis of engineering analysis from 15.08.2014
46 comments
Information
Dear reader, to leave comments on the publication, you must to register.