9 August 1945. The battle for Manchuria began

9 August 1945. The Manchurian operation began (the battle for Manchuria). It was a strategic offensive operation of the Soviet troops, which was carried out with the aim of defeating the Japanese Kwantung Army (its existence was a threat to the Soviet Far East and Siberia), liberating the Chinese northeastern and northern provinces (Manchuria and Inner Mongolia), Liaodong and the Korean Peninsula, and eliminating the largest military bridgehead and military economic base of Japan in Asia. Having carried out this operation, Moscow fulfilled agreements with its allies on the anti-Hitler coalition. The operation ended with the defeat of the Kwantung Army, the surrender of the Japanese empire, and was the end of the Second World War (September 2, Japan’s surrender act was signed on September 1945).

The fourth war with Japan

Throughout 1941-1945. The Red Empire was forced to keep no less than 40 divisions on its eastern borders. Even during the most brutal battles and critical situations 1941-1942. in the Far East there was a powerful Soviet grouping, in full readiness to repel the blow of the Japanese military machine. The existence of this group of troops was the main factor that held back the onset of Japanese aggression against the USSR. Tokyo chose the south for its expansionist designs. However, until the second hotbed of war and aggression continued to exist in the Asia-Pacific region - imperial Japan - Moscow could not consider security secured on the eastern frontiers. In addition, it is necessary to take into account the “revenge” factor. Stalin consistently pursued a global policy aimed at restoring the position of Russia in the world, and the defeat in the Russian-Japanese war 1904-1905. damaged our position in the region. It was necessary to return the lost territories, the naval base in Port Arthur and to restore its position in the Pacific region.

The defeat of Nazi Germany and the unconditional surrender of its armed forces in May 1945, as well as the successes of the Western coalition forces in the Pacific theater of operations, forced the Japanese government to begin preparations for the defense.

On July 26, the Soviet Union, the United States and China demanded that Tokyo sign an unconditional surrender. This claim has been rejected. 8 August, Moscow declared that from the next day it would consider itself at war with the Japanese Empire. By that time, the Soviet high command had deployed troops transferred from Europe on the border with Manchuria (there existed the puppet state of Manchuku). The Soviet army was to defeat Japan’s main strike force in the region, the Kwantung Army, and liberate Manchuria and Korea from the invaders. The destruction of the Kwantung Army and the loss of the northeastern provinces of China and the Korean Peninsula were to have a decisive impact on speeding up Japan’s surrender and speeding up the defeat of Japanese forces in South Sakhalin and the Kuril Islands.

By the beginning of the Soviet offensive, the total number of the Japanese group, located in Northern China, Korea, South Sakhalin and the Kuril Islands, amounted to 1,2 million people, about 1,2 thousand. tanks, 6,2 thousand guns and mortars and up to 1,9 thousand aircraft. In addition, the Japanese troops and the forces of their allies - the Manzhou-Guo army and the Menjiang army, relied on 17 fortified areas. The commander of the Kwantung Army was General Otzo Yamada. To destroy the Japanese army in May-June 1941, the Soviet command to 40 divisions that were in the Far East, additionally transferred 27 infantry divisions, 7 separate infantry and tank brigades, 1 tank and 2 mechanized corps. As a result of these measures, the combat strength of the Soviet army in the Far East almost doubled, amounting to more than 1,5 million bayonets, over 5,5 thousand tanks and self-propelled guns, 26 thousand guns and mortars, and about 3,8 thousand aircraft. In addition, more than 500 Pacific ships and vessels took part in the hostilities against the Japanese army. fleet and the Amur Flotilla.

6 and 9 August 1945, the US Air Force dropped two atomic bombs on the Japanese cities of Hiroshima and Nagasaki, although they did not have important military significance. In the course of these attacks, 114 thousand people died. The first nuclear bomb was dropped the city of Hiroshima. It suffered terrible destruction, out of 306, thousands of inhabitants over 90 thousand died. In addition, tens of thousands of Japanese died later due to wounds, burns, and radiation exposure. The West has committed this attack not only with the aim of demoralizing the Japanese military-political leadership, but also demonstrating the Soviet Union. US wanted to show a terrible action weapons with the help that they wanted to blackmail the whole world.

The main forces of the Trans-Baikal Front, under the authority of Malinovsky, struck from the territory of the Mongolian People's Republic (Mongolia was our ally) from Transbaikalia in the general direction of Changchun and Mukden. The troops of the Trans-Baikal Front were to penetrate into the central regions of Northeast China, to overcome the waterless steppe, and then pass through the mountains of Khingan. The troops of 1 of the Far Eastern Front, commanded by Meretskov, attacked from Primorye in the direction of Jilin. In the shortest possible direction, this front was to reach a connection with the main grouping of the Trans-Baikal Front. The 2 th Far Eastern Front, under the leadership of Purkaev, launched an offensive from the Amur Region. His troops had the task of killing opposing enemy forces with blows in a number of directions, thereby contributing to parts of the Trans-Baikal and 1 Far Eastern fronts (they were to surround the main forces of the Kwantung Army). Air force strikes and amphibious assault forces from the ships of the Pacific Fleet were supposed to support the actions of the ground attack forces.

Thus, the Japanese and allied troops were attacked on land, from sea and air throughout the vast 5-thousandth part of the border with Manchuria and to the coast of North Korea. By the end of 14 in August, 1945, the Trans-Baikal and 1-th Far Eastern fronts advanced into the north-east of China by 150-500 km and reached the main military-political and industrial centers of Manchuria. On the same day, in the face of imminent military defeat, the Japanese government signed a surrender. But, the Japanese troops continued to put up fierce resistance, because, despite the decision of the Japanese emperor to surrender, the order to the command of the Kwantung Army to cease hostilities was never given. The subversive groups of suicide bombers, who tried to destroy Soviet officers at the cost of their lives, undermine themselves in a group of soldiers or in armored vehicles and trucks, were particularly dangerous. Only from 19 in August, the Japanese troops stopped resistance and began to lay down their arms. 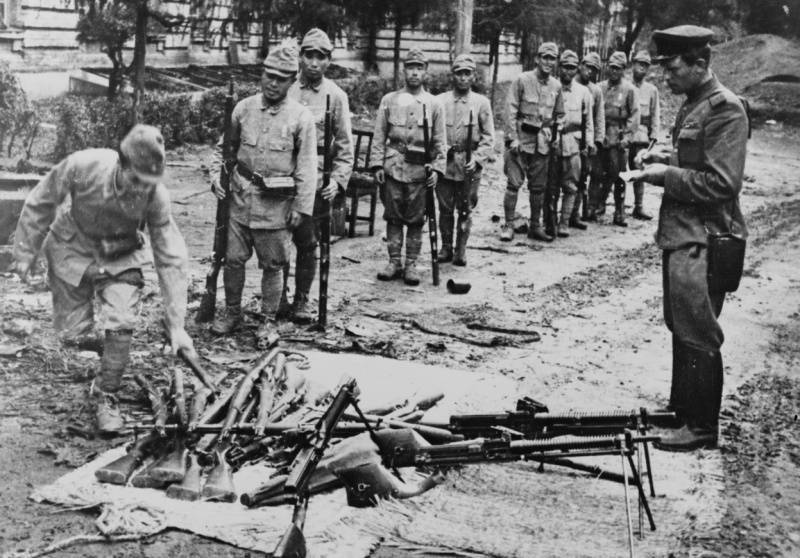 Japanese soldiers surrender their weapons to a Soviet officer.

At the same time, there was an operation to liberate the Korean Peninsula, South Sakhalin and the Kuril Islands (they fought up to September 1). By the end of August, 1945, the Soviet troops completed the disarmament of the Kwantung Army and the vassal state of Manzhou-Guo, as well as the liberation of Northeast China, the Liaodong Peninsula and North Korea to the 38 parallel. 2 September The Japanese Empire surrendered unconditionally. This event took place on board the American ship "Missouri" in the waters of Tokyo Bay.

At the end of the fourth Russian-Japanese war, Japan returned to the USSR South Sakhalin. The Kuril Islands were also ceded to the Soviet Union. Japan itself was occupied by American troops, which continue to be based in this state to the present. From 3 May 1946 to 12 in November, the 1948 passed the Tokyo Process. The International Military Tribunal for the Far East condemned the main Japanese war criminals (total 28 people). The International Tribunal sentenced 7 people to death, 16 defendants were sentenced to life imprisonment, the rest received 7 years in prison. 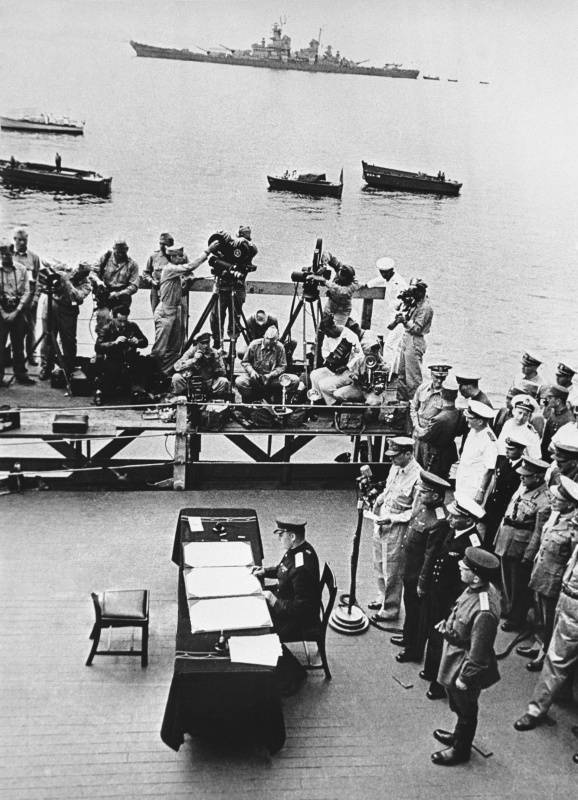 Lieutenant-General K.N. Derevianko on behalf of the USSR signs the Japan Surrender Act on board the American battleship Missouri.

The defeat of Japan led to the disappearance of the puppet state of Manzhou-Guo, the restoration of Chinese power in Manchuria, the liberation of the Korean people. Helped the USSR and the Chinese Communists. The 8 units of the Chinese People’s Liberation Army entered Manchuria. The Soviet army handed over the weapons of the defeated Kwantung Army to the Chinese. In Manchuria, under the leadership of the Communists, government bodies were created, military units were formed. As a result, Northeast China became the base of the Chinese Communist Party, and it played a decisive role in the victory of the communists over the Kuomintang and the Chiang Kai-shek regime.

In addition, the news of the defeat and surrender of Japan led to the August Revolution in Vietnam, which broke out at the call of the Communist Party and the League of Vietminh. The liberation uprising was led by the National Committee for the Liberation of Vietnam under the leadership of Ho Chi Minh. The Vietnam Liberation Army, which had grown more than 10 times in a few days, disarmed the Japanese units, dispersed the occupation administration and established new government bodies. 24 August 1945 Propulsion Vietnamese Emperor Bao Dai abdicated. The supreme power in the country passed to the National Liberation Committee, which began to perform the functions of the Provisional Government. 2 September 1945 Vietnamese leader Ho Chi Minh declared the "Declaration of Independence of Vietnam".

The defeat of the Japanese Empire caused a powerful anti-colonial movement in the Asia-Pacific region. So, 17 August 1945 g. Committee on the preparation of the independence led by Sukarno declared the independence of Indonesia. Ahmed Sukarno became the first president of a new independent state. Great India, where the leaders of the people were released from prison Mahatma Gandhi and Jawaharlal Nehru, was heading towards independence. 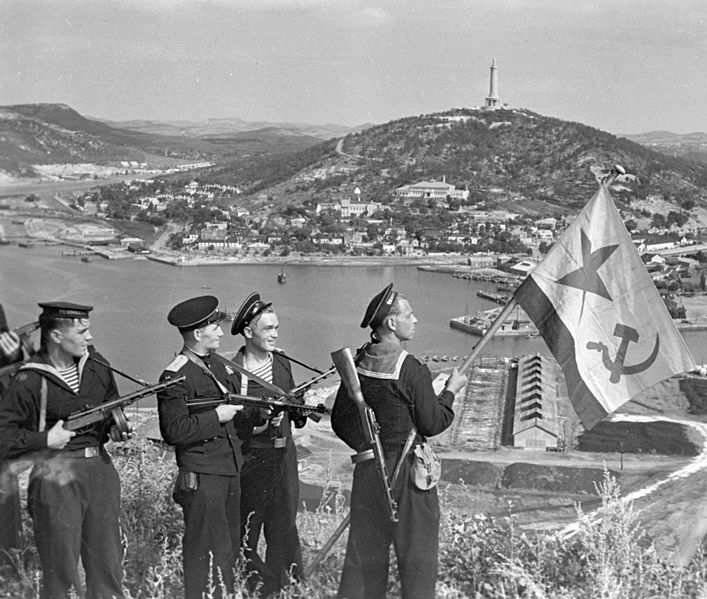