From sin to root, why the Russians did not go on a crusade

October 11 2010
8
First, some Russian thugs in KP-I participated and were mentioned by non-Russians. Secondly, let's remember what happened in Russia in 1096 year.
13 April 1093 died Grand Duke Vsevolod Yaroslavich, grandson of Vladimir the Holy.
His son Vladimir, in order to avoid strife, gave the throne to his cousin Svyatopolk Izyaslavich, and, as it turned out, in vain. The fact is that after learning of the death of Vsevolod, the Polovtsy sent ambassadors to Kiev: like, decide that everything will be as before. Mu ... ak Svyatopolk, without consulting with the squad, put the ambassadors in prison. Polovtsev this somewhat hurt, and they went to understand.

Tellingly, Toriss went to Kiev and laid siege to Torchesk, who was always blowing for the federal center. Now Zassal is already Svyatopolk and released ambassadors, but the Polovtsy said that "Teper is a blood mest!" Svyatopolk began to gather an army, but it was not going to, and he had to call for his cousin Vladimir, thereby giving up the Great Table. 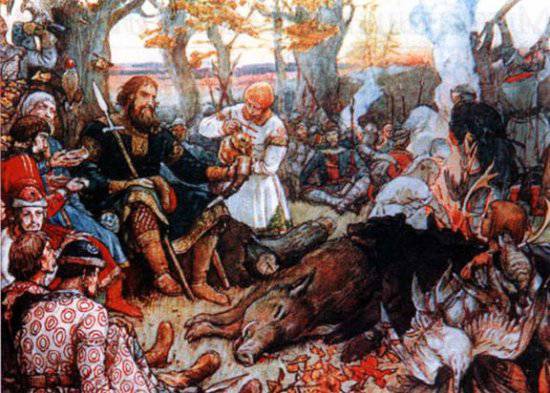 Vladimir was a state man, so he sent for his brother Rostislav, told him to also hurry to help, and he came to Kiev. After a brief relative sracha, Vladimir and Svyatopolk kiss the cross between themselves. Then the question arose of what to do with the anti-fascists, who everywhere sent their cultural characteristics. Vladimir proposed to make peace, Svyatopolk although rati. Vsevolodovich had to agree, although they felt that it would not end well. Going over the ford of Stugnu, which spilled heavily at that moment, the Russians stood between the ramparts, and then both-on: anti-fascists approached, it was 26 May. After the skirmish of the Russian and Polovtsian horse archers began mesilovo. Svyatopolk fought well, but his people of Kiev pushed and ran, the prince retreated last. Having driven out the Kievans, the Polovtsi climbed on Vsevolodovich, and they also could not stand it, rushed to the river and Rostislav drowned in front of Vladimir, who returned to Chernigov in great sorrow.

Polovtsi continued to engage in cultural characteristics and again laid siege to Torchesk. Torquay fought back bravely and did not cease to appeal to the federal center: whether he would force the anti-fascists to peace and threatening in case of refusal by separatism. The Polovtsi decided to show whose cones are in the forest, and they also besieged Kiev. Svyatopolk went out to meet them. He was again defeated, but the Polovtsy departed from the capital and returned to Torchesk, who after some time was exhausted and capitulated. Polovtsi burned the city, and turned all the local people into slavery - the federal center sucked in the eyes of the national suburbs.

On this occasion, blah blah blah mourning and human grief and the Lord of all our sins and finally, local Fallout was outlined, for the Polovtsy continued to fight the land in addition to the siege of Torcheska.

So sadly ended for the Russian 1093 year.

In 1094, Svyatopolk married Tugorkan’s daughter, deciding, apparently, that there were no ugly women, and if anything, he would close his face with a pillow. Father-in-law was deeply moved and made peace with the Russians.

And then - both-on-2! Oleg Svyatoslavich came with the other Polovtsy from Tmutorakan and laid siege to his cousin Vladimir in his Chernigov - Oleg did not like the Southern Federal District and he wanted something more impressive - this was his third approach to the projectile in alliance with anti-fascists. Vladimir gave up and went to Pereyaslavl, Oleg sat in Chernigov, gratefully allowing the Polovtsi allies to collect as many Russian sheep as they like (which they gladly did).

And in August, 1094 16-th number came to Russia in wild quantities locusts and devoured grass and grass, and this was the first time in all history observations.

And then Poltavs came to Itlari and Kytan in Vladimir Vsevolodovich in Pereyaslavl - like, again put up - then de Tugorkan put up with Svyatopolk, and now you and I will reconcile if you don’t mind. Vladimir was forced to give his son Svyatoslav Kytanu hostage and let Itlarya with the best warriors into the city. Then a messenger came to Vladimir from Svyatopolk with details of a certain skinhead plan, and the brigade told the prince that it was time to stop with non-Russians (Itlar and his guardsmen), otherwise they were completely bummed. At first, Vladimir resisted: “But what about the oath?”, To which the pasans reasonably answered him: “Commander, they swear an oath with us a year later, and then they swarm, and all of them with goose are water — cultural characteristics. Come on and we will also be special , so what?"

Vladimir agreed, and, drawing on the work of Torkov, who had a dipped tooth on the Polovtsy, at first he conducted a special operation to steal his son, Svyatoslav, at night, then he cut Kytan and his squad asleep. Itlar sat in Pereyaslavl in the courtyard of a certain Ratibor and did not know anything, on the next day, on Sunday, it was decided to stop with him. To begin with, they sent him a message: come, they say, to Vladimir in the courtyard, let us know, cho? And then locked up. Itlar began digging a tunnel from the premises, but only dug out, as Ratibor piled him up with a bow, and beat the rest. This special operation took place 24 February 1096 year.

After that, Svyatopolk Izyaslavich and Vladimir Vsevolodovich pooled their forces and offered Oleg, who was still in Chernigov, atone for with blood, and join the campaign against the unclean. Oleg promised, but he slyly didn’t go, and in vain, because Svyatopolk and Vladimir attacked the killed Polovtsian princes and filled everyone, even the camels, and then they demanded that Oleg write down the son of the late Itlari who was kept at his court . Oleg sent all and cousins ​​were holding a grudge.

In the summer of 1095 (1096?), The Polovtsi fought Yuriev, but sucked, and then Sviatopolk came and drove them away and the people brought to Russia and built the city of Svyatopolch on Vitichev Hill. Abandoned Yuriev Polovtsy burned.

No less interesting events took place in the North. There were no Polovtsians, but Yaroslav’s grandchildren were abundant there. Davyd Svyatoslavich left Novgorod for Smolensk, because he was not loved by the gentlemen of Novgorod. The Novgorod gentlemen punished him not to go to them anymore, but they themselves brought Mstislav Vladimirovich from Rostov. And Izyaslavl Vladimirovich came out of Kursk and wrung out from Oleg Svyatoslavich Murom, which the Muromi people were so glad of that they even tied up the Oleg mayor.

But here, stsuko, 28-th of August, the locusts again came running and everyone crap, as there were a lot of it.

In the spring of 1096, Svyatopolk and Vladimir sent to Oleg with a proposal to conclude a fair Pasan world before the bishops, hegumen and the whole world in general. Oleg answered in the sense that SB. Then Svyatopolk and Vladimir were already offended and really attacked 3 on Chernihiv in May, and Oleg, from there, respectively, ran out and arrived at Starodub. But since he was already all zadolbal, cousins ​​chased him, laid siege to the city and fought terribly, although they were shot at from the city. Oleg Zassal already finally and went out to give up and kiss the cross. Since the church already buzzed all the ears about Boris and Gleb to all the princes, they did not cut it, and even offered to go to Davyd to bring him to Kiev and sign a common union treaty. Oleg agreed - and what was he to do? He went to Smolensk, but from there he was sent, and Oleg had to be satisfied with Ryazan.

But while the princes were busy with these interesting things, the Polovtsy Bonyak was rude again near Russia (Surprise-surprise!), And Smoking - on May 24, burned out the outskirts of Pereyaslavl. All this time, Svyatopolk and Vladimir besieged Oleg, ord. And then there's Sviatopolk's father-in-law, Tugorkan, besieged Pereyaslal. but Vladimir and Svyatopolk already became experienced warriors and friendly brothers, just like Donskoy and Khorobry, so they decided that they wouldn’t stop, and at first they lifted the siege from Zarub. Then they secretly climbed Trubezh, and Vladimir began to set up regiments, but the Russians were already terribly zadolbany with all this mess, so they did not wait for the end of the Eine columnar of marches, and began to beat Polovtsy! Shabby, in short, shoulders in the distance, ours drove them terribly and killed the fuckin-in-law and all the rest.

So Boch saved the Orthodox 19 of June (sometimes it is written that Julia, but this is a mistake), but it was too early to relax, because the next time a velvety Bonyak jumped in and almost flew into Kiev, he barely managed to close, then he began to burn and rape neighborhood and burned several monasteries, including Pechersk. After hitting everything, Bonyak left Kiev.

And at the same time, Oleg and Davyd, instead of putting up with Kiev, began to inflict Izyaslav Vladimirovich in Murom, and then in the north pi began ... what a separate war involving Rostov, Murom, Suzdal, Novgorod, Belozer and in general!

And only in 1097, the Lyubech congress took place, at which everything seemed to have kissed the cross, but in November there was a well-known pi ... n and everything started all over again.