The Ministry of Defense told about the strategic exercises "Caucasus - 2020" 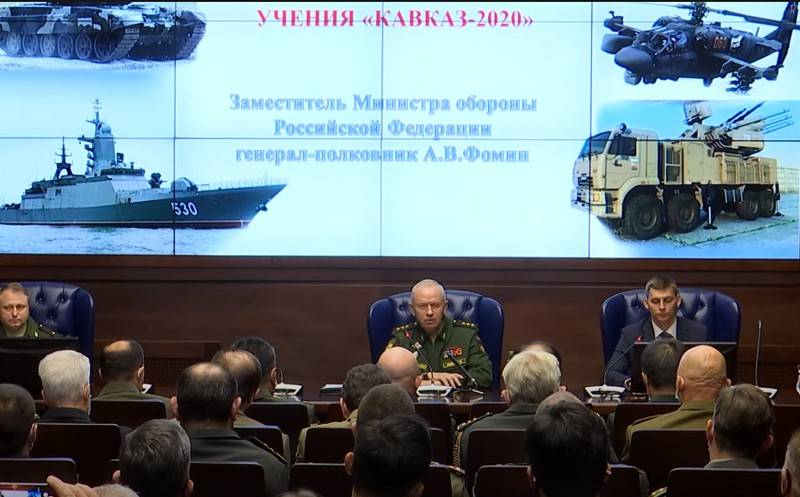 Around 2020 people, including servicemen from six foreign countries, will take part in the Kavkaz-80 strategic command and staff exercises. This was reported by the Ministry of Defense.


The military department explained that, in addition to combat units, units of logistical and technical support, the Ministry of Emergency Situations, the Russian Guard, in total about 80 thousand people, will be involved in the exercises. In this case, the number of military personnel falling under the Vienna Document will be approximately 13 thousand people. The number of Russian equipment involved in the exercises is declared at 250 tanks, up to 450 infantry fighting vehicles and armored personnel carriers, about 200 artillery systems and MLRS. In addition, a number of light armored vehicles will be provided by China.

In total, the Kavkaz-2020 command and control squadron is expected to involve about 80 people (including formations and units of combat, logistical and technical support, as well as formations of air defense, the Navy and special forces (Rosgvardia and the Ministry of Emergency Situations). military units falling under the Vienna Document 000 in the exercise, conducted under a single operational command, will be up to 2011 military personnel
- said in a statement.

In addition to the Russian military, servicemen from Belarus, Armenia, China, Myanmar and Pakistan will take part in the ground part of the exercise. Iran will be represented in the sea part, where, together with the ships of the Navy, it will take part in the drawing of scenarios in the waters of the Caspian and Black Seas.

Representatives of Azerbaijan, Indonesia, Iran, Kazakhstan, Tajikistan and Sri Lanka will be observers at the exercises.

The main part of the exercises will take place at the training grounds of the Southern Military District - Prudboy, Ashuluk, Kapustin Yar.

Ctrl Enter
Noticed oshЫbku Highlight text and press. Ctrl + Enter
We are
Reports from the militia of New Russia for 29 August 2014 of the yearGreat maneuvers in the Caucasus in 2012
5 comments
Information
Dear reader, to leave comments on the publication, you must to register.