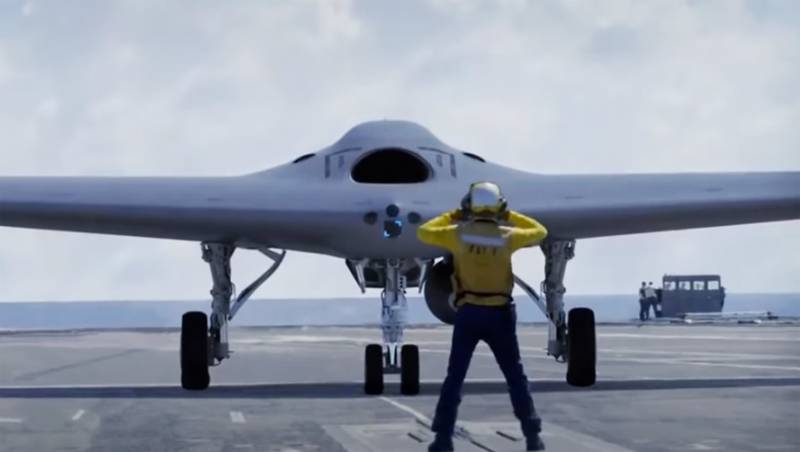 Head of Deck Development Department aviation US Navy Rear Admiral Greg Harris announced the main direction of modernization of American aircraft carrier strike groups. According to him, today the main emphasis is on increasing the range of combat use of the AUG aviation wing.

We carried out a comprehensive study of the structure of the aircraft carrier's air wing - both aircraft and maintenance personnel, weapons systems, and networking capabilities. To give our carrier strike groups additional opportunities to increase the range of the aircraft wing, we are adding the latest tankers to this aircraft wing.
According to Rear Admiral Harris, at the moment we are talking about unmanned aircraft refuellers Boeing MQ-25 Stingray.

Harris notes that the MQ-25 Stingray is a tool that can significantly increase the range of combat use of carrier-based aircraft of both the 5th and 4th generations.

This will allow our carrier-based aircraft to achieve long-range dominance from the deck of an aircraft carrier. There will be new opportunities for striking, maintaining the pace of the combat operation.
According to the American rear admiral, his opinion is that the 11 operating aircraft carriers of the US Navy are "the most surviving airfields in the world."

The Americans commented on this statement to Harris in the media. In particular, it was noted that in reality, the United States currently has not 11, but 8 aircraft carriers on the move. Three are at docks "with disrupted repair and maintenance deadlines."
Ctrl Enter
Noticed oshЫbku Highlight text and press. Ctrl + Enter
We are
Reports from the militia of New Russia for 27-28 September 2014 of the yearYuri Drozdov: Russia prepared the role of the sacrificial calf
Military Reviewin Yandex News
Military Reviewin Google News
66 comments
Information
Dear reader, to leave comments on the publication, you must to register.