Unknown details of the exercises of the B-52H flight 25 km from the northern borders of Crimea. Has the USAF achieved the desired result? 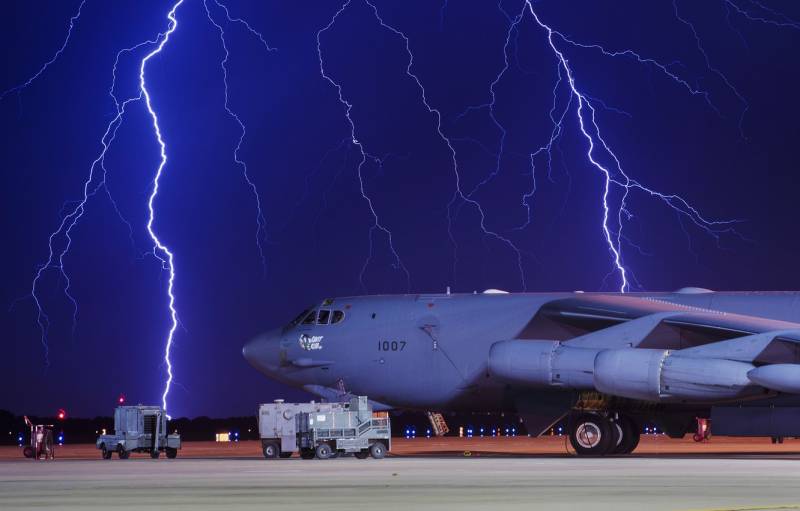 As shown by a cursory monitoring of numerous military-analytical and news publications of the Russian segment of the Internet in the period from 4 to 7 September 2020, information about the operation of a link of three modernized strategic bombers-missile carriers B-52H of the US Air Force 25 km northeast of Russia's air lines over the Republic of Crimea provoked a wide response and heated discussions not only in the observer circles, but also in the expert communities, knowledgeable in detail about the operational-strategic and tactical-technical background of this military air exercise.


And in light of the ongoing military-technical support of the Ukrainian paramilitaries from the North Atlantic Alliance, the continued likelihood of an escalation scenario in the Donbas theater of operations at the suggestion of Washington, as well as the adaptation of the mooring infrastructure of the port of Odessa to the arrival of the Type 23 "Duke" anti-submarine frigates of the Royal Navy of Great Britain for probable participation in "picks" with the Russian low-noise diesel-electric submarines of pr. 636.3 "Varshavyanka" (against the background of the aggravation of the operational-tactical situation in the Azov-Black Sea conventional theater of operations), such a reaction of the Russian mass media and military experts to this event does not cause any surprise. Indeed, in addition to the first recorded provision by official Kiev of the southern sectors of the airspace of the "square" (over the Zaporozhye region and the North-Western Azov region) to demonstrate the presence in this region of the air component of the US Air Force Global Strike Command, we are talking about two more interesting nuances ...

Firstly, about the development by the crews of three strategic missile carriers B-52H "Sratofortress" of a massive missile and air strike (using virtual "digital" models of AGM-86C / D Block IA / II CALCM cruise missiles loaded into the simulation software of weapons control systems " Stratofortress ") on strategically important objects of the Black Sea fleet The Russian Navy, airbases and other strategically important facilities on the territory of the Republic of Crimea.

Secondly, the use of these aircraft as a kind of "bait" to activate as many modern AWACS radars and all-altitude detection of 59N6E Protivnik-G and 96L6 types, multi-functional radar systems for combat mode of interspecific use "Gamma-C1" and " Sky-M ", radars for illumination / guidance 92Н6Е, 30Н6Е2, 9С36 and 9С32М, attached to anti-aircraft missile divisions and regiments S-400" Triumph ", S-300PM2" Favorite "," Buk-M2 / 3 "and modernized military anti-aircraft missile systems S-300V4, forming an anti-missile "barrier" of the Crimean zone of restriction and denial of access and maneuver A2 / AD. In this case, the key subject of interest of the US Air Force Commands and the NATO Joint Air Force was the frequency parameters of various modes of operation of the above radar systems, for the analysis of which a strategic radio and electronic reconnaissance aircraft of the US Air Force RC-135W Block was sent to neutral airspace over the central part of the Black Sea. 8 "Rivet Joint".

The main technical trump card of machines of this type is the presence of an onboard highly sensitive multi-band radio intelligence complex 55000 (RTR AEELS subsystem) based on a two-way interferometric side-scan headlamp, which provides direction finding and classification / identification of radio-emitting objects (ground-based radar, airborne radar of tactical fighters and active self-targeting radar etc.) within the radio horizon with a final analysis of their frequency modes of operation by means of 16 computerized AWP terminals, aggregated into a single network-centric information network through a fiber-optic multiplex data exchange bus with a throughput of about 1 Gbit / s.

As a result, the reconnoitered and studied in detail the frequency parameters of the operation of the above radars of our air defense systems could provide the operator of the RC-135W aircraft, as well as specialists in the US Air Force command and the headquarters of the American military-industrial corporation "Raytheon", an unpaved field for activities in the field of developing an appropriate algorithm electronic countermeasures (frequency sighting noise responses with high spectral density) to these radar complexes, which would later be loaded into the on-board computers of the promising American container complexes electronic warfare AN / ALQ-249 (V) 1 "Next Generation Jammer" Increment 1. As you know , the specialists of the Raytheon corporation have started the final stage of full-scale tests of the AN / ALQ-249 (V1) electronic warfare systems, after which the product will reach the level of operational readiness and will be put into mass production with a phased integration into the avionics of aircraft Electronic warfare / air defense suppression EA-18G "Growler", as well as multifunctional fighters F-16E / F Block 60 and deeply improved tactical fighters F-15EX "Advanced Eagle".

An equally significant advantage of the information field of the RC-135W strategic radio and electronic reconnaissance aircraft is the presence of a multi-band electronic reconnaissance complex 85000 (ES-182 MUCELS), designed to intercept and decode voice radio channels and radio channels of the network-centric telecode network for exchanging information about the tactical situation between radio stations tactical aviation and ground command posts of the NKVS-27 type, as well as between the automated control systems for the Polyana-D4M1 anti-aircraft missile brigades and anti-aircraft missile divisions.

Meanwhile, it should be noted that, despite the presence in the architecture of the RER ES-182 MUCELS complex of high-performance computerized terminals for analyzing the enemy's protected radio communication channels, only digital voice radio channels protected by the scrambling method (reversible conversion of a digital stream in the frequency and time ranges from addition of false components to the original signal), while decoding of radio channels for the exchange of information about tactical air and ground situations established between A-50U AWACS aircraft, tactical aviation and ground command posts and protected by the method of pseudo-random frequency tuning (PPRCH) and the Reed code - Solomon, can become a daunting and sometimes daunting task for a team of nine highly qualified cryptologists-linguists who have at their disposal the 85000 ES-182 MUCELS complex.

So, for example, terminals for the exchange of information on tactical air situation of the types K-DlAE, K-DluE, K-DlI / S-108 and S-111, installed on multifunctional fighters Su-27SKM, Su-30SM / 1/2, Su -35C and Su-57 and operating in the frequency range from 960 to 1215 MHz, modulate the signal with data "packets" using the Reed-Solomon code, and during transmission they use the method of pseudo-random tuning of the operating frequency with a frequency of 78125 "hops" / s. A similar principle of protection of radio data exchange channels is used in the terminals of the Link-16 / JTIDS network-centric network, integrated into the avionics of the AWACS aircraft RLDN; cruisers, frigates and destroyers of the URO of the US Navy and NATO Naval Forces, as well as aircraft of the tactical and strategic aviation of the United Air Force of the North Atlantic Alliance.

Based on all of the above, you ask yourself the following question: did the above RTR / RER complexes provide operators of the RC-135W "Rivet Joint" aircraft with comprehensive information about the frequency parameters of the operation of the radar systems of the Russian S-300PM2, S-400, Buk-M3 and S air defense systems? -300V4, as well as about the peculiarities of target allocation carried out by automated control systems for mixed anti-aircraft missile brigades "Polyana-D4M1" and "Baikal-1M", for the activation of which the notorious outfit of 3 "strategists" was sent to the northern borders of Crimea. -52H? Naturally not ...

It would be extremely naive to assume that with the simultaneous detection of only a trio of "strategists" B-52H and "Rivet Joint" by radar AWACS of standby mode "Sky-SVU" and "Protivnik-G" of the Russian Aerospace Forces on the northeastern and southern approaches to the air space of the Russian Federation over the Crimea, the command of the anti-aircraft missile forces of the Russian Aerospace Forces would have made such a rash decision as to use dozens of divisional radars for illumination and guidance 92Н6Е / 30Н6Е, 9С36, 9С32М, etc. in the modes of "tying target traces" and "capture for precise auto tracking". After all, we are talking about an ordinary demonstration flight of the Stratofortress, which excludes the possibility of a massive missile-air strike using 60 AGM-86C / D CALCM TFRs. Consequently, there was absolutely no point in using the "shooting" modes of operation of the above radars, which were so interesting and critical for the US Air Force's electronic intelligence.

As for monitoring the flight route and maneuvers of the Stratofortress flight near our air lines, as well as pushing the uninvited guests (if necessary) deep into the airspace of the "square", then one AAC "Protivnik-G" radar is quite capable of handling this range of tasks. "In the aerospace survey mode and" target tracing ", as well as a link of two multipurpose Su-30SM or Su-35S even without turning on the onboard radar N011M" Bars-R "or N035" Irbis-E "(without" opening "Frequency parameters of their work for operators RC-135W" Rivet Joint "), because these fighters can boast of the presence of passive quantum optical-electronic sighting and navigation systems OLS-30I / 35, capable of bearing in the infrared channel of sight and accompanying the" troika " B-52H at a distance of 70-100 km by infrared radiation of jet jets emanating from the nozzles of the Pratt & Whitney TF33-P / 103 turbojet engine.

Ctrl Enter
Noticed oshЫbku Highlight text and press. Ctrl + Enter
We are
Situational analysis of the death of the MH17 flight (Malaysian Boeing 777), made on the basis of engineering analysis from 15.08.2014Teachings at foreign borders, or if you want peace ...
Military Reviewin Yandex News
Military Reviewin Google News
78 comments
Information
Dear reader, to leave comments on the publication, you must to register.