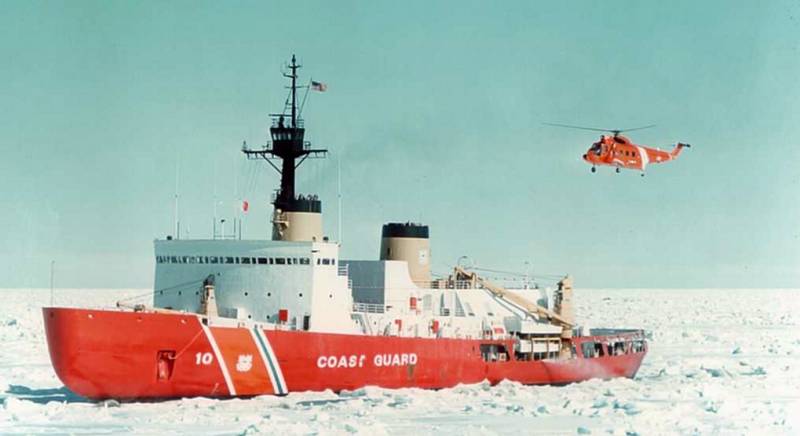 The reader may remember that about two years have passed since the Americans, through the mouth of Secretary (Minister) of the Navy R. Spencer, promised to "make the passage along the Northern Sea Route by a group of ships", and without the notification and consent of Russia, because they "are for freedom of navigation "advocate. But time passed, and, apparently, prudent people (they are still found in American headquarters) explained to this minister how an attempt to break through the NSR without demand and support could end: the Arctic does not like jokes, and even in summer you can get yourself into trouble. That’s if the Russian Navy doesn’t explain that it’s not worth embarking on a path that runs through the territorial waters of Russia for a considerable length. In addition, the minister, apparently, was explained that there is nothing to walk on: the United States has only one and a half icebreakers in service, and without an icebreaker on the NSR there is almost always nothing to do.

"Icebreaker and a half"

One and a half icebreaker is a heavy (according to the US classification) USCGC Polar Star (WABG-10) icebreaker of the US Coast Guard (WABG-122), dimensions 25,4x9,4x13842 m, displacement up to 11 tons, with a diesel-gas turbine power plant, formally making it close in power Russian nuclear icebreakers of previous generations. True, in reality the situation is somewhat different. There is also the USCGC Polar Sea sistership (WABG-1976), but it has been out of service for ten years, is used to cannibalize parts for the sistership and will not return to service. "Polar Star" breaks down every other time, but it is stubbornly repaired, because there is no other support ship for the US Antarctic expedition. Moreover, the tendency to breakdowns is not due to age. The ship built in 3, of course, has a respectable age, if it is a nuclear icebreaker, it would have been put out long ago in our country, but there are many diesel-electric icebreakers of the same or older age in Russia, for example, the Ermak series. Finnish-built of 36 vessels with a capacity of 4 thousand hp. or a series "Captain Sorokin" of 22 vessels with a capacity of XNUMX thousand hp. It is simply obvious that a gas turbine power plant, with all its advantages (compactness, power), is not the best choice for an icebreaker. There are, apparently, drawbacks of the project itself, otherwise how to explain the periodic problems with the integrity of the hull of both ships?

But the US Coast Guard also has a medium icebreaker USCGC Healy (WABG-20), which in terms of a displacement of 16257 tons and dimensions of 128x25x8,9 m will be larger than the Polar Star, but it is average in its capabilities. It is able to move in ice only 1,4 m thick (of course, if it accelerates and piles on the ice, then more, of course), while the more powerful Polar Star - up to 1,8-2 m. But "Healy" is much younger and more modernly equipped: he is 21, the age for a non-nuclear icebreaker is generally youthful. And it's diesel, which is a much more adequate choice for an icebreaker. "Healy" does not go to Antarctica and works mainly in the Arctic. In particular, together with the German research icebreaker Polarstern in 2001, it became one of the first non-nuclear ships to reach the North Pole without a nuclear icebreaker. The first was the Polarstern itself in 1991, together with the Swedish icebreaker Odin (and the first surface vessel in general was our nuclear-powered Arktika in 1977). Diesel-electric ship "Polarstern" built in 1980, by the way, the ship is very famous and belongs to the Institute of Polar and Marine Research in Bremerhaven, named after Alfred Wegener - professor, creator of the theory of continental drift, polar explorer, who died in one of the expeditions to Greenland. The Germans have long been trying to create a replacement for him, but the matter is going almost as successfully as the epic with the legendary Berlin airport, with the only difference that the airport seems to have been almost completed, but no one started to build Polarstern II, only the next tender canceled this year, even before the pandemic. 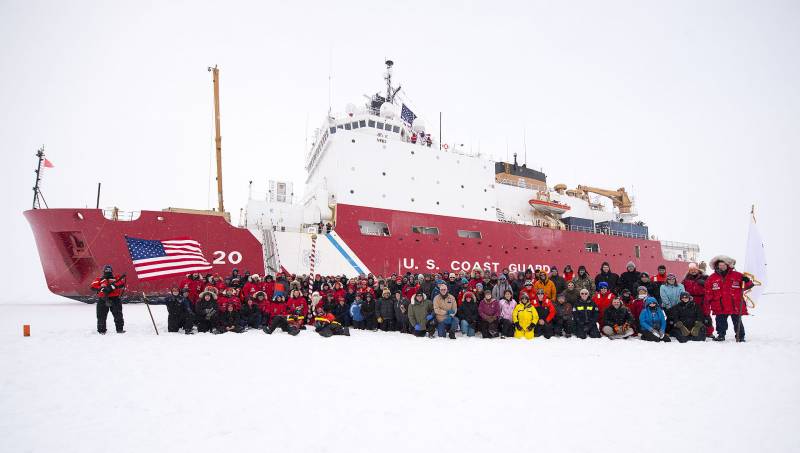 USCGC Healy (WABG-20). September 7, 2015 at the North Pole, where the American icebreaker first reached alone, 38 years after the "Arctic"

Went to restrain the Russians and didn't get there

But back to Healy. The ship has a lot of scientific merits, it regularly carries scientists to the Arctic, however, most often it works somewhere not very far from Alaska. In 2015, she became the first American surface vessel to visit the North Pole unaccompanied by a foreign icebreaker. It is worth noting, however, that the abnormally warm weather of recent years also made such missions possible; in 1977, Healy would simply not have been able to reach the Pole. But in recent years, when Washington has embarked on a struggle against "Russian influence" in the Arctic, the Healy missions have been constantly trying to attach some political significance. Like "restraining Russia in the Arctic." To be honest, the author does not understand how an unarmed and very average icebreaker can hold back. But it is under this dressing that everything is served at briefings and in the media, obviously for their own man in the street, who, as the sharks of our show business rightly believe, "eat everything."

The current deployment of Healy to the Arctic, called the Arctic Shield, was served under the same sauce. As part of the operation, he was supposed to patrol for twenty-six days in the Bering Sea, not very far from the border between our countries, for which on August 15 he took on board 11 scientists and equipment for research in Seward, Alaska. But already on August 18, 60 nautical miles from the coast of Alaska, a fire broke out on board from a short circuit in the power grid in the engine room. Fire Result: Right-hand diesel generator and right-hand main propulsion motor are not working. The mission, of course, was immediately canceled, the ship turned around and headed to its home port of Seattle for inspection and repair. Officially, there were no victims of the emergency.

“I thank the Healy team for their swift action to safely extinguish the fire,” said Linda Fagan, Vice Admiral, US Pacific Rim Commander. "This accident, however, means that the United States is limited in icebreaking capabilities until Healy is repaired, and this highlights the country's critical need for polar safety vessels." (Polar security cutter - this is the name of the US Bohr icebreakers.) Transferring from admiral to human, we find that the United States was left without the only icebreaker involved in operations in the Arctic, because Polar Star is involved in supplying the Antarctic expedition, and they are shaking over it and do not even hide it - he has no replacement. How long or not "Healy" broke down, we'll see.

Of course, fire is not uncommon on modern ships. And the failure of the propeller motor - too. Not so long ago, on the newest universal two-draft nuclear icebreaker of the LK-60Ya type (project 22220) Arktika, which is undergoing tests and is already finalizing them, one of the main electric motors also failed. And it requires replacement, which can only be carried out next year. But on this ships there are 5 more such engines, and the nuclear ship simply temporarily reduced its power on propellers from 60 MW (82 thousand hp) to 50 MW (67 thousand hp), which still makes it and the largest in the world and one of the most powerful in the world (it will concede only "50 years of Victory" and "Yamal" out of those operating with their 75 thousand hp) and has little effect on its capabilities, which are still unlikely in the first year of operation whether they would have been used to the fullest - the technique takes time to master. But Russia has about 40 non-nuclear and nuclear icebreakers, while the United States, one might say, had one and a half.

Of course, Americans are well aware that this is not the case. And they are looking for various ways to solve the problem, up to attempts to buy orphan icebreakers in countries like Sweden or Finland (which is quite unlikely) or considering the possibility of ordering icebreakers from the Finns (which is also unlikely due to lobbying in the United States itself and the peculiarities of the legislation). In the meantime, the development and construction of its lead icebreaker has been ordered. Last year, the US Border Guard Service signed with the shipbuilding company VT Halter Marine Inc. a $ 745 million contract for the detailed design and construction of a next-generation heavy icebreaker.The US agency's fiscal 2021 budget requires $ 555 million to build a second heavy icebreaker and authorize the transfer of another 70 million from another program to continue funding the heavy icebreakers. In total, the contract includes an option to build 2 more icebreakers, for a total price of 1,94 billion dollars. True, during the journey the dog not only can, but must grow, and the price will surely rise. The first icebreaker should be completed in 2024, although the deadline is likely to be shifted and the coronavirus will be referred to. 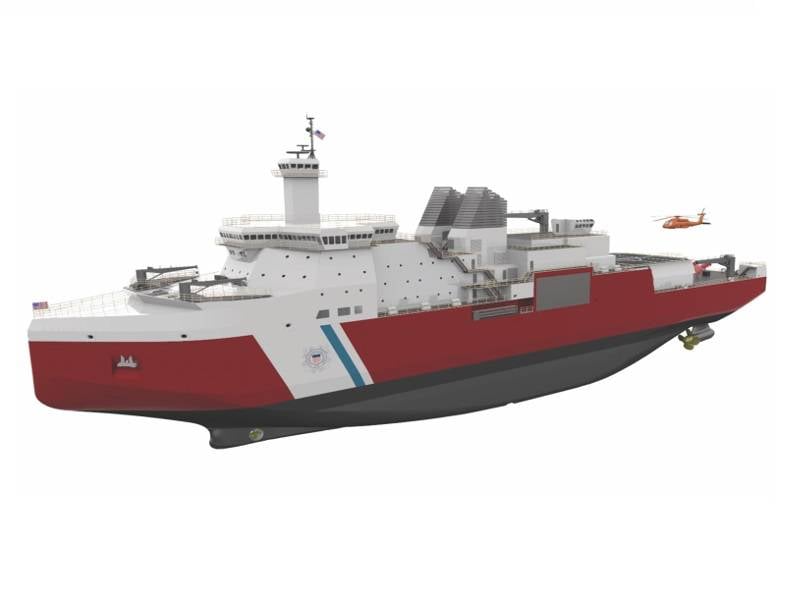 New American icebreaker (project)
What is this ship? Its dimensions are 138x26,4m, the total displacement is indicated at 22900 tons, the type of power plant is diesel-electric, the power is 45200 hp. (33 MW), the thickness of the ice, which he can pass - 1,8 m (in the normal mode of passage). If you look at the image of the ship posted on the website of the construction company (the project developer is different there - Teamed Associates, Inc.), you can see that the project is very conservative. There are no "fashionable" stem contours that look like the ram stems of old battleships and armored cruisers. There is no streamlined forecastle, merged together with the superstructure - such a solution is used on the now under construction "super icebreaker" - the domestic LK-120Ya "Leader" (project 10510), which will be laid on September 28 at the SSK "Zvezda" and will be called "Russia". The builder of the new American icebreaker himself explains the conservatism of the ship by the fact that it comes from the Polarstern II project, which has not yet begun to be built. The ship's capacity is 186 people and its autonomy is 90 days. The icebreaker will have Azipod propellers from ABB / Trident Marine, engines from Caterpillar, control system and automated control system - Raytheon, etc. In general, an icebreaker is like an icebreaker. He will not be the "King of the Arctic", but he looks quite decent in the project.

But what they will do when they are built, and how this ship will conquer the Arctic, we will see in a few years. The main thing is not to accompany each exit to the sea with stories about the heroic confrontation of Russian aggression against freedom-loving polar bears and walruses, as they do every time the "injured" Healy leaves. Already tired of this circus.

Ctrl Enter
Noticed oshЫbku Highlight text and press. Ctrl + Enter
We are
Situational analysis of the death of the MH17 flight (Malaysian Boeing 777), made on the basis of engineering analysis from 15.08.2014Results of the week. “In our cooperative, the board is always agreed”
Military Reviewin Yandex News
Military Reviewin Google News
57 comments
Information
Dear reader, to leave comments on the publication, you must to register.