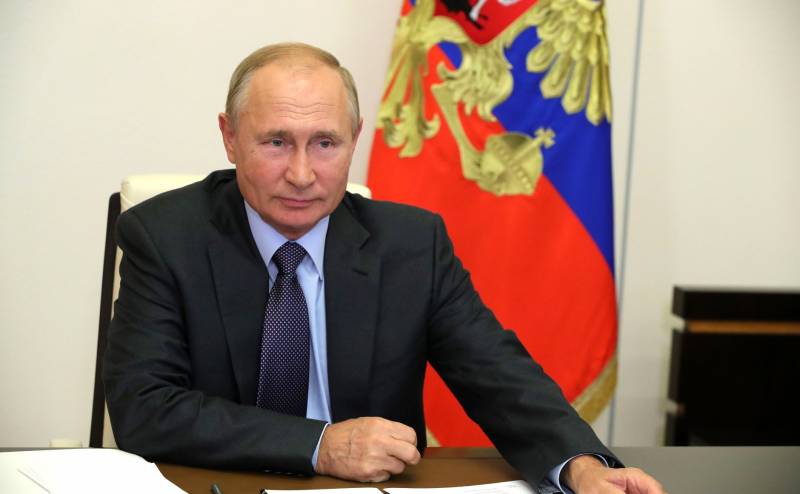 I am often asked questions, the answers to which can be found out after a fairly long (for a person, naturally) period. On the one hand, such questions are easy to answer, and on the other, if we are to speak seriously, they should be based on some facts, on some conclusions, not just indisputable, but fundamentally correct. One of these questions is the “problem of 2024” for Russia.


Indeed, for us, 2024 is not just the end of the last presidential term of Vladimir Putin, no matter what our oppositionists may say about this, it is the end of many megaprojects already announced and operating in the Russian Federation. The time when, according to the plans of the incumbent president, Russia must change in many respects. If you like, become a comfortable country for living.

It is with this statement that our liberals most often frighten the layman. The image of the "eternal" Putin has been promoted to such an extent that not only our "fighters against the regime" are now in a stupor, but also Western ones.

The authority and respect for Putin the politician is so great that there is practically no leader in world politics who can oppose him on equal terms. And the attitude of the people of Russia to their leader can be seen at any elections, at any polls. Even when unpopular decisions are made, the rating of the Russian president is quite high.

But let's think: is it real? It seems to me that the only option for Putin to participate in the next elections is the collapse of the system of public administration that he has been building over the past decade. If by 2024 there is no leader in the country who can replace the incumbent president ... But in this case, it is inappropriate to go for the next term. Putin will not be able to offer anything new.

Speaking about the next presidential term, our oppositionists for some reason carefully observe the law on non-disclosure of personal data. And this, given the age of the supporters of liberalism in Russia, is quite important. Let me remind you that on October 7 this year, Vladimir Vladimirovich will be 68 years old! Accordingly, in 2024 he will be 72!

Those of the readers who have already moved into the category of retirees understood me perfectly. After you pass from the "age of life" to the "age of survival", the strength really begins to leave you. And even with the use of medication methods of recuperation, the understanding comes that you will no longer win the "derby of three years".

It will be no less difficult in the highest echelon of power, among those who directly manage the most important structures of government. Little is said about this either. We are used to the fact that the appearance of the head of our Foreign Ministry at any summit is always an event. The authority of Sergei Viktorovich Lavrov in the world is probably no less than the authority of Putin. The very participation of the Russian minister in any meeting or negotiations guarantees the interest in the event all over the world.

Meanwhile, on March 21 this year, Sergey Viktorovich celebrated his 70th birthday! To be honest, I am amazed by the fact that a person at this age retains such a capacity for work. The crossings alone are worth something. And the job is no easier than that of the president. In 2024, Lavrov will be 74 years old!

Another key minister is Defense Minister Sergei Kuzhugetovich Shoigu. Agree, the authority of this person in the world also deserves great respect. The successes of the Russian army are largely associated with this minister. It was under him that the army regained its status of the defender of the people and the respect of the people. By the way, this year he also celebrated an anniversary. He turned 21 on May 65! By the next elections Shoigu will be 69!

Another power minister, relatively young and promising Vladimir Aleksandrovich Kolokoltsev. It is foolish to dispute the importance of the Ministry of Internal Affairs for maintaining stability within the state. The Minister of the Ministry of Internal Affairs is young compared to others, but he is still 59 years old ... And he will be 63 in 2024.

Deputy Minister of the Ministry of Internal Affairs, head of the Russian Guard Viktor Vasilyevich Zolotov. Today Rosgvardia is far from the internal troops of the USSR. These are real combat units that have combat experience and are practically constantly conducting combat operations to eliminate bandit formations on Russian territory. General Zolotov celebrated his 66th birthday this year. Accordingly, in the 24th year will celebrate the 70th anniversary ...

And I will remember one more security officer. The head of the FSB Alexander Vasilyevich Bortnikov. Agree, an influential and significant figure for Russia. The specific nature of the service obscures the activities of this minister, but does not diminish his importance in any way. On November 15, relatives, friends and colleagues will congratulate Alexander Bortnikov on his 69th birthday.

I don't think it's worth continuing to list the veteran ministers. During his tenure, Putin has built a team that has worked well. Each area is managed by a truly professional. But let me remind you what I wrote above. Age spares no one. The performance is reduced. The time has come to hand over the reins of government to a younger, stronger one.

In principle, we have already seen how the system of training senior executives created by Putin operates. Imperceptibly for the country as a whole, most of the regional leaders were replaced by young ones. This did not cause any shocks. And the last example of Khabarovsk showed that even in extreme conditions, young leaders are quite capable of maintaining the manageability and stability of the region.

I think that the coming years will be the time for young people to take the first roles. If this process is extended over time, such a change will not cause any systemic changes in the country's governance at all. This will be the real continuity of power. Guarantee of the country's stability after 2024.

The system should work when replacing elements

It's fashionable to talk about 2024 today. It's fashionable to argue. And most importantly, it's safe for your own image. Remember Khoja Nasreddin and his treaty with the emir? “After all, in twenty years one of the three of us will surely die: either the emir, or the donkey, or me. And then go and figure out who knew theology better! "

For me personally, the question of whether 2024 will be some kind of shock for Russia is not worth it. Yes, we will get a new head of the country. Who will it be? Alas, Russia could more or less accurately answer this question only under the autocracy. In democratic Russia, leaders appear and disappear at a breakneck pace.

It is quite possible that the future "Putin-2" is already known to us. Perhaps he is still in charge of some region or ministry. It does not matter. The main thing, after all, is the country's stability and movement forward. Honestly, "toad jumps", when we jerk, with full exertion of strength, jump to another bump, in front of everyone else, and sit there, looking at the foreigners floating ahead without haste, are tired.

Ctrl Enter
Noticed oshЫbku Highlight text and press. Ctrl + Enter
We are
Situational analysis of the death of the MH17 flight (Malaysian Boeing 777), made on the basis of engineering analysis from 15.08.2014Bashar al-Assad: In Syria, not the “revolution” that the enemies are talking about, but the revolution of the army and the people against terrorists
Military Reviewin Yandex News
Military Reviewin Google News
197 comments
Information
Dear reader, to leave comments on the publication, you must to register.