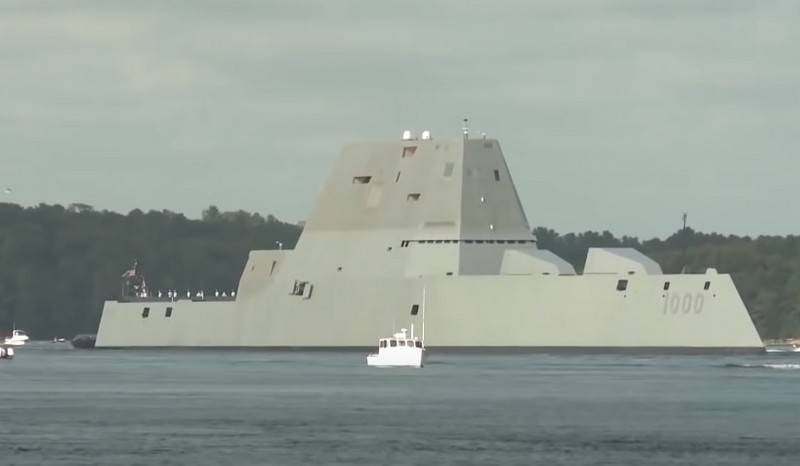 The newest American destroyers of the Zumwalt type, although they suffer from the "childhood diseases" inherent in all new developments, are, in essence, ultra-modern ships, created using modern technologies. Criticized even by the US Navy for constant breakdowns and excessive high cost, they still found application in the American navy.


The American program for the construction of promising destroyers called SC-21 (Surface Combatant for the 21st century) started in 2007. Within the framework of this program, it was planned to supply the fleet with a number of new generation "invisible" surface ships. Initially, the command of the US Navy expected to receive 32 ships of this type for service, spending no more than $ 40 billion on this. However, the increased cost of new destroyers first led to a decrease in the planned number to 24 ships, then to seven, and in the end everything was limited to three: the lead one - USS Zumwalt, USS Michael Monsoor and USS Lyndon B. Johnson.

The high cost of new destroyers, as well as constant breakdowns, are primarily due to the use of the latest technologies in their design.

Destroyers of the Zumwalt class were created as "invisible" ships, therefore the ship's hull was created using "stealth" technology. Unlike traditional ships, the bow of the destroyer is tilted down towards the waterline, and all the sides of the ship's hull are directed towards the sky, this shape is also called "Tumblehome". The ship's superstructure with all other equipment is enclosed in one giant trapezoidal tower of six smooth flat surfaces. Thus, the Zumwalt has a radar cross-section 50 times smaller than it actually is. According to the developers, thanks to the design, absorbing materials and the passive cold air system, the destroyer is perceived on the radar as a small fishing trawler.

The second advanced technology used on the destroyers is its power plant, or rather the Integrated Power System (IPS). Thanks to this system, the Zumwalt destroyers can be described as a completely "electric ship". The ship's main energy sources are two 30 MW MT36 gas turbines from Rolls-Royce; auxiliary - two GTPs RR4500 of low power (3,9 MW each) of the same company. As propellers, two fixed-pitch propellers with short shaft lines are used, which are rotated by asynchronous propulsion motors used at low and medium speed. The power plant is similar to that used on strategic nuclear submarines of the Ohio class.

On the one hand, this technology saves fuel, reduces ship noise, but on the other hand, it significantly increases the cost of the propulsion system, reducing its reliability.

Another breakthrough in the construction of destroyers was to be the Advanced Gun System (AGS), developed by BAE Systems Armaments Systems. The 155 mm caliber gun was supposed to fire high-precision ammunition at a distance of over 100 km while maintaining a high rate of fire. This installation was planned as the main weapons destroyers, however, the high cost of shells for it, reaching 1 million dollars, forced the US Navy to abandon this installation.

It is possible that the Zumwalt-class destroyers have some other innovations, which are not reported due to their secrecy, but the technologies already listed above distinguish these destroyers from the background of traditional ships. Can Russian designers apply any of these technologies on warships for the Russian Navy? With a high probability I can say that they can. And I can even argue that something like this is being developed in our country, it is simply not announced on every corner. But to implement, as they say, "in hardware", to our great regret, we will not be able to do something like that soon due to lack of funds.

Ctrl Enter
Noticed oshЫbku Highlight text and press. Ctrl + Enter
We are
What you didn't want to know about EnglandList of destroyed the largest and most high-tech enterprises
Military Reviewin Yandex News
Military Reviewin Google News
45 comments
Information
Dear reader, to leave comments on the publication, you must sign in.