August 9 2012
158
It is necessary to focus the Armed Forces on the reflection of real and not fantastic threats.

The military doctrine of Russia, which is quite natural, remains secret in that part which concerns plans for future wars and probable opponents. But according to individual statements of the Russian Defense Ministry officials, as well as what weapons systems are being developed and are going to be put on combat duty, what kind of exercises are taking place in our country, certain conclusions can be made about who the Russian military planners are supposed to fight with.

I will try to analyze the scenarios of future wars that the Russian Military Doctrine is focused on and show the threats to Russia's military security - now existing and likely in the future.

Let's start with the most notorious and, perhaps, the most expensive project of recent years - with the purchase of helicopter carriers from France and their subsequent production under license at Russian factories. The price of each ship is about 600 million euros, so this deal is a tasty morsel in all respects. But the logical question arises: what is the combat mission of the acquired Mistral? 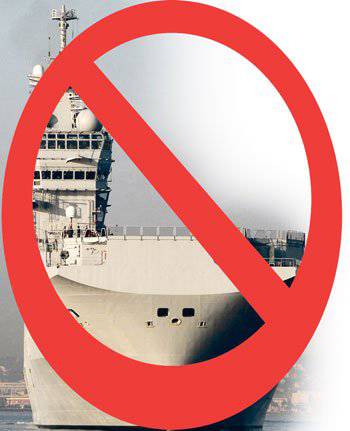 According to the official classification, these are universal amphibious ships capable of taking on a battalion of marines (450 man), 16 heavy helicopters or 32 light rotary wings and then heading to any point of the World Ocean at a distance of 10 800 kilometers (and at an economical speed - even 19 800 km).

In principle, it is clear why UDC is necessary for the naval forces of the Fifth Republic. If a civil war breaks out in one of the former French colonies (for example, in Gabon or Côte d'Ivoire), a military coup will occur, Paris will be able to quickly transfer a detachment of military personnel to the coast of a troubled country, which, if necessary, will support one of the parties to the conflict and evacuate several hundred citizens.

The aircraft carrier Charles de Gaulle equipped with a nuclear power plant could also perform the same functions. Two such "floating airfields", in all likelihood, would be enough for the French to carry out such overseas missions. But the trouble is that the "Charles de Gaulle" - the largest warship ever built in France, was too expensive. Its value is 2,5 billion euros. Therefore, Paris has so far refrained from replenishing the Navy with the second atomic carrier. A little cheaper is the projected “floating airfield” with a conventional power plant - 1,7 billion dollars. And on the "Mistral" is still the newest management system that allows you to manage the entire 160 crew members (for comparison: its number on the Charles de Gaulle is 1200 people, plus 600 pilots, engineers and technicians of the aircraft carrier group).

However, strictly speaking, for French fleet "Mistral" by and large is just an expensive, but not too necessary toy, somewhat experimental. Indeed, in the event of a serious conflict and confrontation with the enemy, having aviation, air defense and combat-ready coastal defense, in a campaign with the "Mistral" will have to send a large group of ships, including an aircraft carrier. And for the actual evacuation operations, you can use cheaper ships, for example, anti-aircraft or anti-submarine frigate (they are also called destroyers in the old fashion). The Mistral is only suitable for missions from the time of the “big gunboat” diplomacy, when you need to put pressure on some militarily weak state. Such a “big gunboat”, in essence, it is, only the price is impressive.

If you ask the question of which naval theater Mistral will be needed by the Russian fleet, the answer will be unequivocal: only in the Black Sea - in the event of a new armed conflict with Georgia or a war with Ukraine, which has the second-largest army in the CIS. Actually, as a result of the Russian-Georgian confrontation in August 2008, the idea was born to buy French helicopter carriers. Then they tried to land a naval landing in Batumi, but the landing barge, where the marines had plunged, turned out to be faulty. And instead of ordering a new barge or even a landing ship, they decided to become generous with UDC and not even for one (we will keep silent about the possible personal geshefts from this deal). 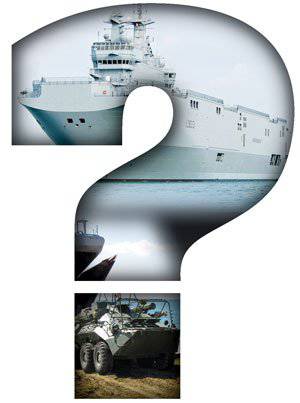 True, Georgia was defeated, although the matter did without amphibious landings. Similarly, if the Russian-Ukrainian war suddenly breaks out unexpectedly, the Armed Forces of the Russian Federation have every chance to cope with the enemy using only the Ground Forces, aviation and the current ships of the Black Sea Fleet without resorting to engaging the Mistral.

However, these UDCs are supposed to be kept in the Pacific, but what they will do there is known only to Russian military commanders and naval commanders, for whom, even more than their French counterparts, Mistrals will be just an expensive but useless toy.

Sometimes they say: the whole point of the Mistral purchase is that the Russian Navy will receive the most modern control systems. But first, they are only suitable for this purpose, and are suitable for other ships, and for other ships they will have to develop new equipment. Secondly, it will be very difficult for our admirals to prepare officers and sailors for service on the Mistral. For it requires high-class professionals capable of working for six to seven sailors on "ordinary" helicopter carriers and aircraft carriers of the previous generation.

The experience of tragic accidents with domestic atomic submarines does not have to optimism. I am afraid that the safest thing for Mistral in Russia is to always stand at the mooring wall (which most likely will happen). Exit to the open sea and even more so an attempt to conduct combat training and firing will always be fraught with unpredictable and tragic consequences.

Objectively speaking, the Russian Federation in general does not make sense to have a large surface fleet and large surface ships. Since the construction of strike aircraft carriers in our country has always encountered and still faces both the complexity of the design of "floating airfields" and the difficulties in creating deck aircraft and training pilots able to take off from an aircraft carrier and successfully land on it, there is no chance in the foreseeable future what to catch up with the US Navy, and even get a little closer to them in terms of combat power. But except for a hopeless struggle against the US Navy, we no longer need aircraft carriers for any purpose, because Russia does not have a large merchant fleet and significant maritime trade that would have to be protected. The maximum that is worth having the Russian Navy out of surface ships is frigates, anti-submarine and landing ships, guard ships and boats. The main emphasis should be placed on the development of submarines, especially nuclear submarines.

Who can fight the Russian Federation

Let us now turn to the Iskander missile system, which we so frighten Europe with. Its missiles have a range of up to 500 kilometers, can carry tactical nuclear warheads and are designed to defeat combat units in the usual equipment of small and area targets in the depth of the operational construction of enemy troops. When Moscow threatens to deploy Iskanders in the Kaliningrad region, it actually suggests the possibility of some kind of local armed conflict between Russia and Poland or the Baltic countries.

However, it is not difficult to figure out that any missile attack on objects in the territory of the Commonwealth or, for example, Lithuania will not lead to a Russian-Polish or Russian-Lithuanian war, but to a clash between Russia and the entire NATO bloc. And in such a confrontation, with or without Iskander, the Russian Federation, given the size and equipment of the armies of the member states of the North Atlantic Alliance, still has no chance to resist if only conventional weapons are used. Therefore, the war will very quickly grow into an unlimited thermonuclear with disastrous consequences for all mankind. And it is extremely doubtful that then Belarus and other CIS countries will want to come to the aid of Russia.

If, God forbid, a war with the use of conventional weapons will break out in the space of the Commonwealth of Independent States, the use of Iskander complexes by Russia in this case will prove to be excessive.

Take, however, another potential adversary of our country - China. And here again, Russia has no chance of winning the usual large-scale war, given the unlimited human resources of the Middle Kingdom in comparison with the Russian Federation and the potential capacity of China’s industry in large quantities to produce weapon and military equipment. Consequently, any truly serious armed confrontation with China of the Russian Federation will have to end as a thermonuclear war. It has a lot of chances to win in our country, but the damage it will incur will be enormous.

Meanwhile, the Russian military doctrine, as in Soviet times, is focused primarily on the possibility of waging large-scale wars against the North Atlantic bloc and China with conventional weapons, although such a scenario in reality seems absolutely incredible. It is for this purpose that the conscription system of recruiting the army and navy of the Russian Federation remains, although the service of recruits has been reduced to one year.

It is believed that thanks to this, Russia will have a reserve of trained reservists, sufficient to wage the two wars mentioned above. However, for a year of being in the army, military recruits are still not ready to wage a modern war with conventional weapons, and after mobilization they will have to deal with them for at least another year or even one and a half, given that they will have time to forget much of taught earlier. And even 12-month service in the draft army of many young people turns away from concluding a contract with the Ministry of Defense to become a professional warrior.

Most importantly, the preparation of these so-called reservists is completely unnecessary, since it focuses on impossible scenarios of war. First of all, one should focus not on confrontation with NATO, but on a potential alliance with the North Atlantic bloc in the event of a conflict between Russia and Celestial. In addition to this, it is necessary to take into account possible local clashes in the CIS space, the fight against terrorism and the preservation of the potential of nuclear-missile deterrence with the NATO bloc. To solve all these tasks, the large in number ordinary Armed Forces are not required and an army of one million people may be redundant.

It is quite enough to have 600 – 700 thousands of military personnel, especially given the presence in Russia of numerous Internal Troops and paramilitary police units, which are mainly tasked with eliminating terrorists. But all the soldiers of the Ministry of Defense must be professionals.

First of all, it is necessary to develop strategic nuclear forces, air defense and missile defense (capable of repelling an attack by countries with a small nuclear-missile potential), and special-purpose units. That is, troops equipped with models of weapons and military equipment, the effective use of which is on the shoulder only for contract servicemen. The costs of defense products designed to be used in military campaigns of the most fantastic nature divert money and material resources from modernizing those industries of our defense industry that can actually produce products necessary to repel real and potential threats.