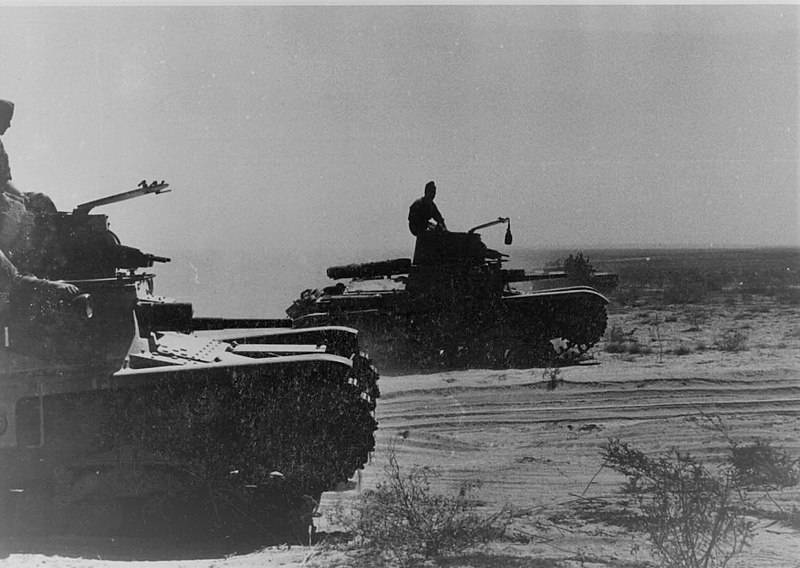 80 years ago, Italy conducted a strategic military operation to capture Egypt. Despite a significant advantage in forces, the Italian troops showed themselves unsatisfactory, were unable to suppress the British and capture Egypt with the Suez Canal.

Struggle for the Mediterranean, Africa and the Middle East

After the occupation of Holland, Belgium and the northern part of France, Hitler, following the logic of the war, had to start a struggle for domination in the Mediterranean Sea, Africa and the Middle East. This struggle was caused by the strategic, political and economic interests of the Third Reich, which claims to be the leader of Europe and the entire West. Control over these areas made it possible to receive huge profits, provide themselves with strategic raw materials, human resources and sales markets. The most important communications passed through the Mediterranean Sea, the Middle East and Africa, which connected the European metropolises, primarily Britain and France, with their colonies.

The Mediterranean Sea was of particular strategic importance under the conditions of the ongoing World War II. The North African coast, with naval and air force bases located on it, was a strategic foothold, using which the fleet and aviation could attack the coast of France and Italy, the Balkans and Turkey. It was not in vain that the British tried to destroy the French fleet after the fall of France and in the face of a thunderstorm the capture of French ships by the Germans and Italians. Also, areas of North Africa could be bridgeheads for the offensive of ground forces (with the support of fleet and Air Force) to the hinterland of Africa and the Middle East. Africa interested European predators as a source of raw materials and food.

The most important region was Egypt with the Suez Canal - one of the strongholds of the British colonial empire. The Middle East was the stronghold of the French and British empires. The main sea and land routes from Europe to Asia and back passed through it and Suez. The oil reserves of the region occupied a special place. By the beginning of 1937, the explored reserves of "black gold" in the Middle East accounted for over 20% of the reserves of the entire capitalist world. Oil production in Iraq, Saudi Arabia and Iran was of vital importance to England.

Another strategic region of the Mediterranean was the Balkans. On the one hand, it was a strategic foothold for movement to the south and east. On the other hand, there was a rich raw material and food base here. Hitler understood this perfectly. Asia Minor was also important for the opposing sides. The shortest route from Europe to the Near and Middle East went through Turkey. As a result, the Balkan countries and Turkey could not stay away from the ongoing world war. 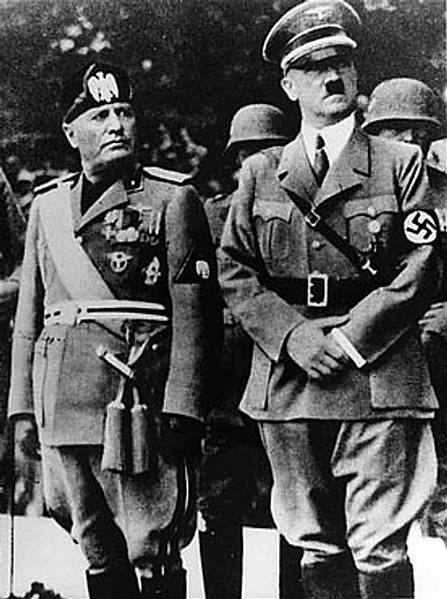 Mussolini and Hitler in 1937
Mediterranean communications were of great importance both for Britain and for Germany and Italy. The British sought to maintain control of their main bases in the Mediterranean: Gibraltar, Malta and Suez. The journey from the Middle East through Africa to Europe was more than three times longer across the Mediterranean. And from India to Europe around Africa is 8 thousand km longer than through the Suez Canal. A halt in transport across the Mediterranean would have led to a 2–4-fold drop in tonnage turnover, which would disrupt Britain's supply of strategic raw materials. It would drastically slow down the transfer of troops and reinforcements from one theater to another. That is, if Hitler had occupied Suez instead of attacking Russia, he would have given the British Empire checkmate.

Since the time of the Second Reich, Germany has laid claim to vast areas in Africa, the Near and Middle East. The Germans wanted to regain their former colonies in Africa: Cameroon, Southwest (modern Namibia) and East Africa (modern Tanzania, Burundi and Rwanda). They were to become the core of a new German colonial empire in Africa, including the Belgian Congo, French Equatorial Africa, British Kenya and Rhodesia. The Union of South Africa was to become a vassal fascist state. Madagascar also passed into the sphere of influence of Germany. 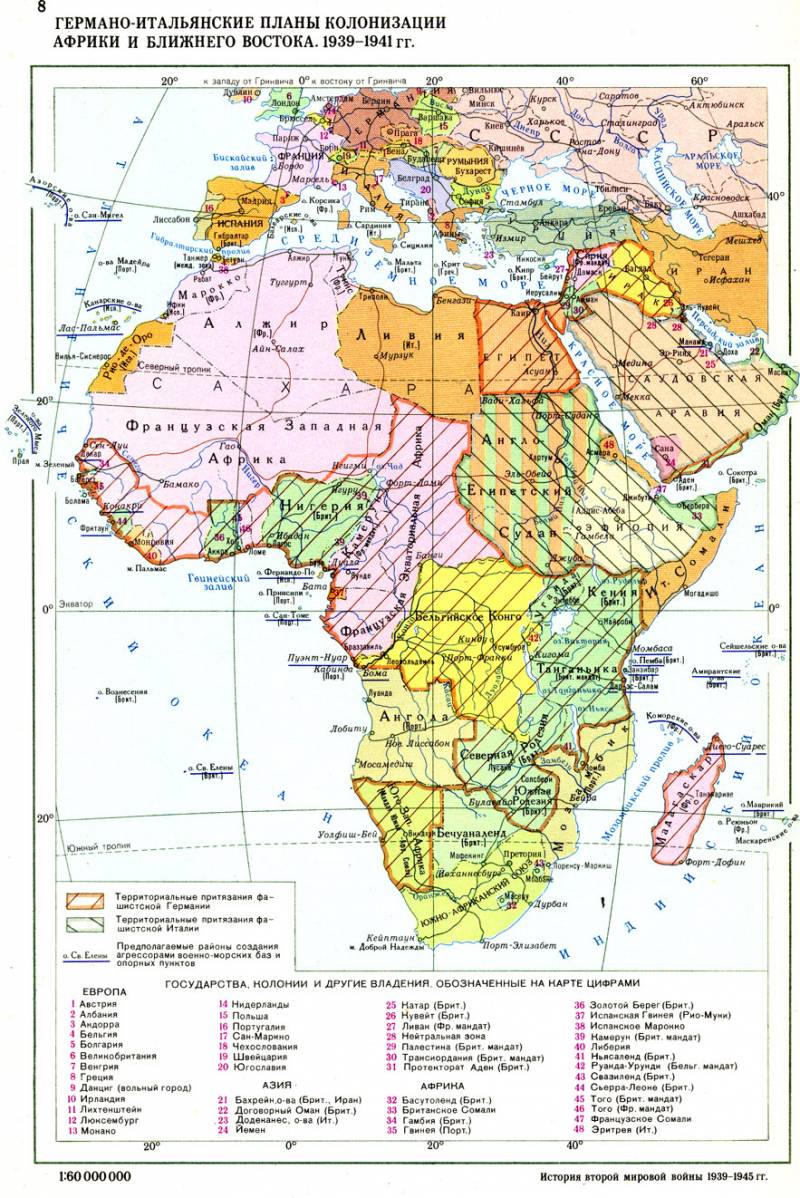 At first, Hitler wanted to become the complete master of Europe. He looked to the East. While the German divisions were to conquer the "living space" in the East, the main role in the Mediterranean and Africa was assigned to Italy. Duce was supposed to provide the rear of the Fuhrer from the Mediterranean Sea.

At the same time, Mussolini himself had his own plans in the Mediterranean basin and Africa. Even before the formal outbreak of world war in 1939, Rome began to create a "great Roman empire". The Italian fascists dreamed of the revival of the Roman Empire with a nucleus in Italy. In 1935-1936. Italians conquered Ethiopia, in 1939 - Albania. In the summer of 1940, Italy supported the German aggression against the French and grabbed a piece of southeastern France. At the same time, Rome claimed the more extensive lands of southern France, Corsica.

The Italian fascists planned to establish complete domination in the Mediterranean Sea, including access to the Atlantic and Indian Oceans, to capture the most important islands and regions in the Balkans (Montenegro, Dalmatia). In addition to Libya and Ethiopia, the Italians were going to include in their empire a part of Egypt and Anglo-Egyptian Sudan, British and French Somalia, Aden, Socotra Island. The Italian sphere of influence included Yemen, Oman, Saudi Arabia, Iraq, Turkey, Palestine and Transjordan. 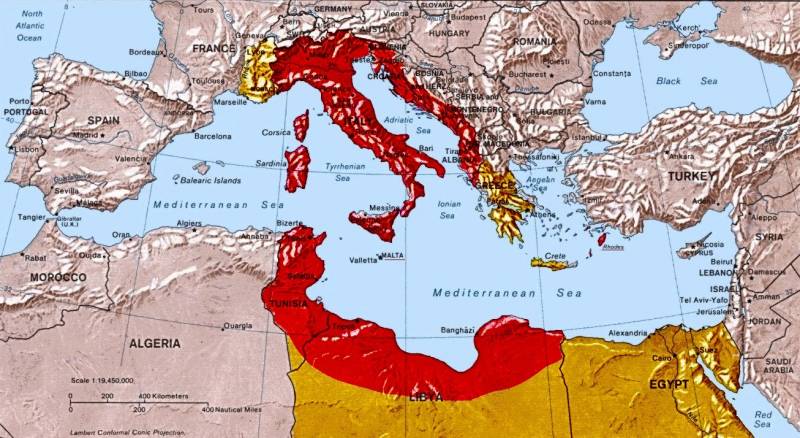 Forces of the parties. Italy

By 1940, Italy had significant forces in the Mediterranean region, including the metropolis, and in Northeast Africa. The ground forces, including the colonial forces and fascist militia formations, numbered 71 divisions, over 1,1 million people. The Air Force had more than 2,1 thousand aircraft, the fleet - about 150 large ships (including 4 battleships and 22 cruisers) and 115 submarines. However, fascist Italy, despite all the efforts of the military-political leadership, which had embarked on a course of expansion, aggression and militarization back in the 20s, was ill-prepared for war. The armed forces could more or less effectively fight only with backward opponents. At the same time, a strong partisan movement fettered significant forces in Italy.

The armament of the Italian army was largely outdated (including the artillery park from the First World War). The country's military-industrial base was weak, there was a shortage of raw materials. Italy could not independently provide the armed forces with modern weapons and technology. Germany itself fought and prepared for a battle with Russia, so supplies to the allies were limited. The ground forces and the air force had little experience for conducting combat operations in Africa (lack of communications, often complete, problems with supply, drinking water supply, etc.). Low mechanization was a big problem for the Italian units.

However, despite all the problems and shortcomings, the Italian leadership was preparing for hostilities in North and East Africa. Significant contingents of troops were sent to Eritrea, Italian Somalia, Ethiopia and Libya. That is, the Italians could conduct operations to encompass British troops (British, Australian, African colonial, Indian, New Zealand and South African troops) in Egypt and Sudan from the flanks. 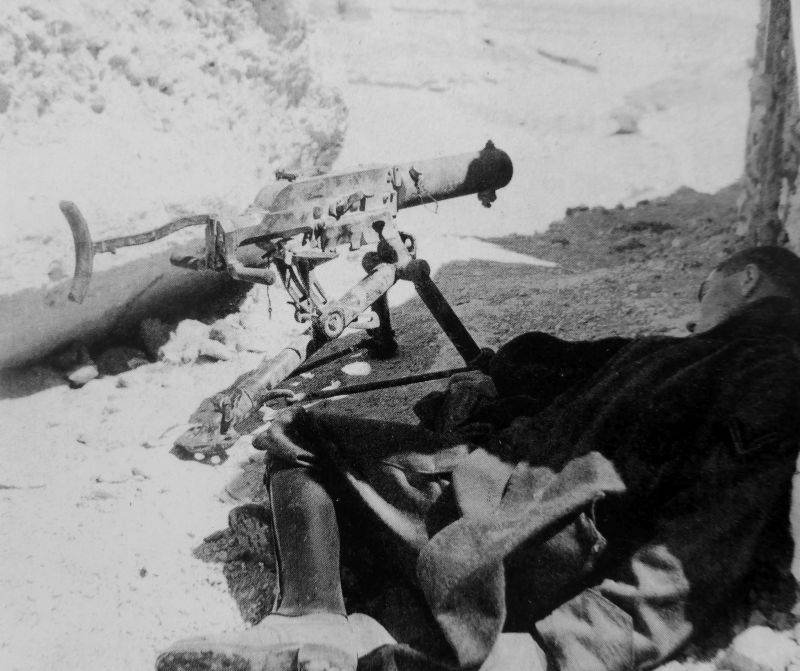 An Italian machine gunner sleeps in the shadows near the city of Berbera in the Italian-occupied part of British Somalia. Next to him is the Schwarzlose heavy machine gun

The Anglo-French command originally planned to defeat both enemy groupings - Libyan and Ethiopian. They were going to be taken in ticks: to hit Libya from Egypt and Tunisia, Ethiopia from Sudan and Kenya. The success of the operation lay in the fact that the Allies could cut off the Italian groups in Ethiopia and Libya from Italy with the help of the fleet and aviation. And without reinforcements, supplies, spare parts, the Italian troops in the colonies were doomed to defeat. The colonies did not have a military-industrial base. In the event of the outbreak of war, the French fleet had to take control of the western Mediterranean, the British - the eastern. After conquering dominance in the Mediterranean and defeating the enemy in Africa, the allies were going to attack Italy itself.

At the same time, when developing plans for war, the British traditionally intended to use the allies ("cannon fodder") in their own interests. First of all, the stake was placed on the French troops, large contingents of which were based in North Africa and the Middle East. They were to deliver the main blow to the Italians in Libya from French Tunisia and Algeria. The concentration of large forces of the French in Syria should have forced Turkey to side with Paris and London. This led to a change in the balance of power in favor of the allies in the Middle East and the Balkans. In Northeast Africa, the British intended to use primarily Ethiopian guerrillas against the Italians. 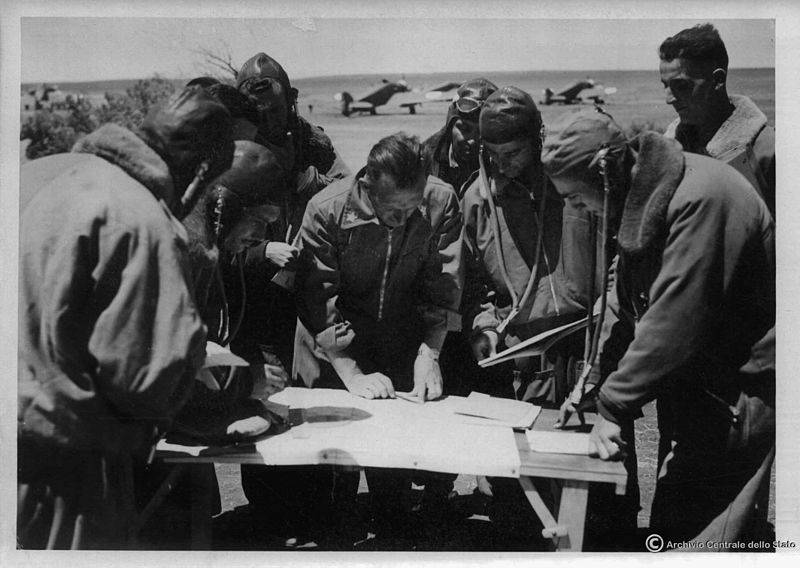 The defeat of France, the orientation of the Vichy regime towards Germany and the entry of Italy into the war on Hitler's side shook the strength of Britain's position in the Mediterranean Sea, the Middle East and Africa. The strategic situation in this area of ​​the planet has radically changed in favor of Italy and Germany. If Germany launched an active offensive in the Mediterranean, Egypt and North Africa with large forces, supporting the existing troops of Italy, then the military-political collapse of the British Empire would become a reality.

England was forced to switch to a strategic defense, hoping to protect Egypt, Sudan, Kenya, Palestine, Iraq and Aden. At the same time, the British, relying on the remaining military superiority at sea, planned to maintain dominance in the Mediterranean, blocking the naval bases of Italy as much as possible. Additional forces and equipment were hastily deployed from India, Australia, New Zealand, the African colonies and even England itself to the Near and Middle East. Also, British agents tried to activate the partisan movement in Ethiopia and Italian Somalia, to win over local residents, including Arabs. The defense of Malta, Britain's main stronghold in the central Mediterranean, was strengthened. Part of the French elite and society, dissatisfied with the Vichy government, were attracted to the side of Britain. The patriots of some French colonies - French Equatorial Africa and Cameroon - spoke out against the Vichy. In the fall of 1940, they became the stronghold of the "Free France" led by de Gaulle, which continued the war on the side of England. The colonial authorities of the Belgian Congo were on the side of the British. 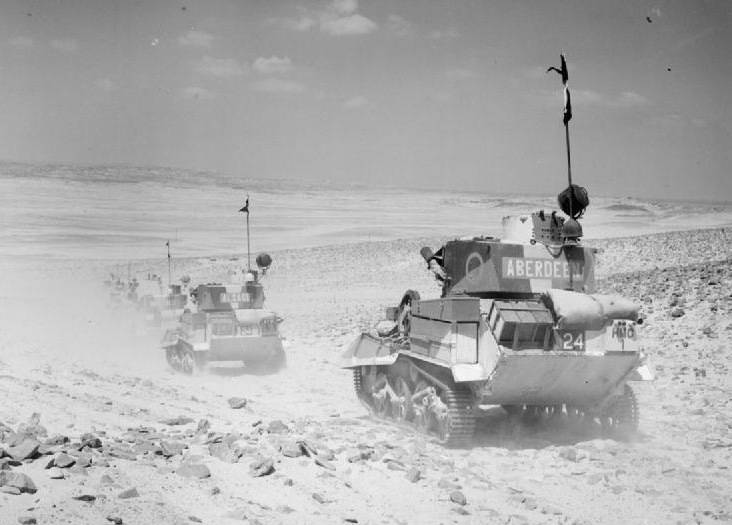 British Army in North Africa. Light tanks MK VIB of the 7th Armored Division on patrol in the desert. August 1940
To be continued ...

Ctrl Enter
Noticed oshЫbku Highlight text and press. Ctrl + Enter
We are
From assassination to execution. The path to the death of Benito MussoliniAmerica vs England. Part of 16. Crossroads of history
Military Reviewin Yandex News
Military Reviewin Google News
45 comments
Information
Dear reader, to leave comments on the publication, you must to register.