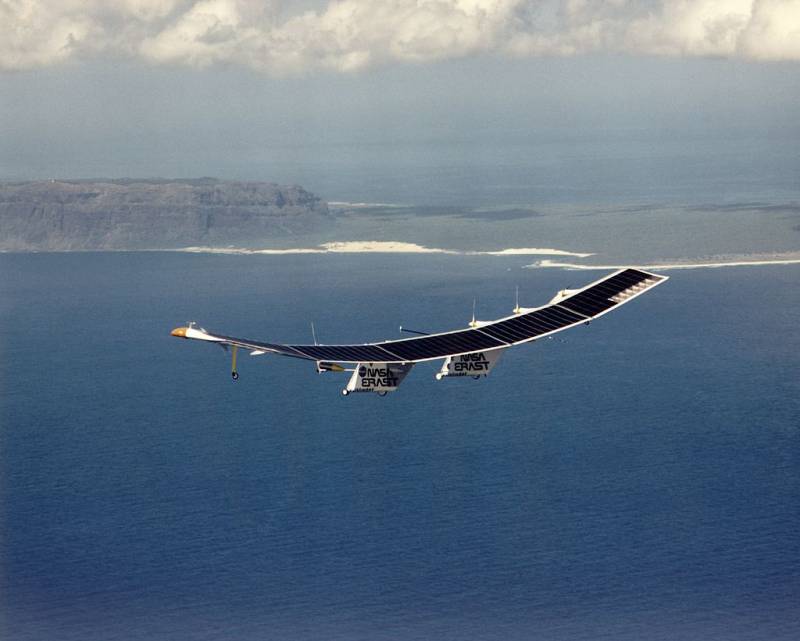 Stratospheric heights of about 18-30 kilometers are poorly mastered by humans. In this kind of "near space" planes are taken infrequently, and there are no spacecraft. But such a layer in the Earth's air layer is very convenient for covert observation. Firstly, aircraft at such altitudes can survey an area comparable to the territories of Afghanistan or Syria, and at the same time patrol over one territory for a long time. At the same time, an orbiting satellite skips the terrain rather quickly, often not having time to capture important objects and processes. Secondly, ground-based air defense systems are not yet designed to search for and destroy such small-sized and high-altitude reconnaissance aircraft. According to calculations, the effective scattering area can reach 0,01 m2... Of course, with the massive appearance of such pseudo-satellites in the sky, the air defense will find solutions for interception, but the cost of destruction can be prohibitive. In addition to reconnaissance, high-altitude drones can provide communications and navigation.

Most of the drones developed so far, designed for such heights, are built on the basis of solar cells and batteries. At altitudes of several tens of kilometers, solar energy is "absorbed" much more efficiently, which allows the winged machine not only to power electric motors, but also to store energy in batteries. At night, the drones use what they store during the day; at dawn, the cycle repeats. It turns out a kind of perpetual motion machine that allows machines to fly from several days to several years at altitudes up to 30 kilometers. For example, if one such pseudo-satellite replaces the famous Global Hawk, then the operator will save about 2000 tons of fuel per year. This is not taking into account the lower cost and much longer operational time. However, all this information is theoretical: until now, the record for the duration of the flight of such equipment is 26 days. This was achieved in 2018 by the European pseudo-satellite Airbus Zephyr. 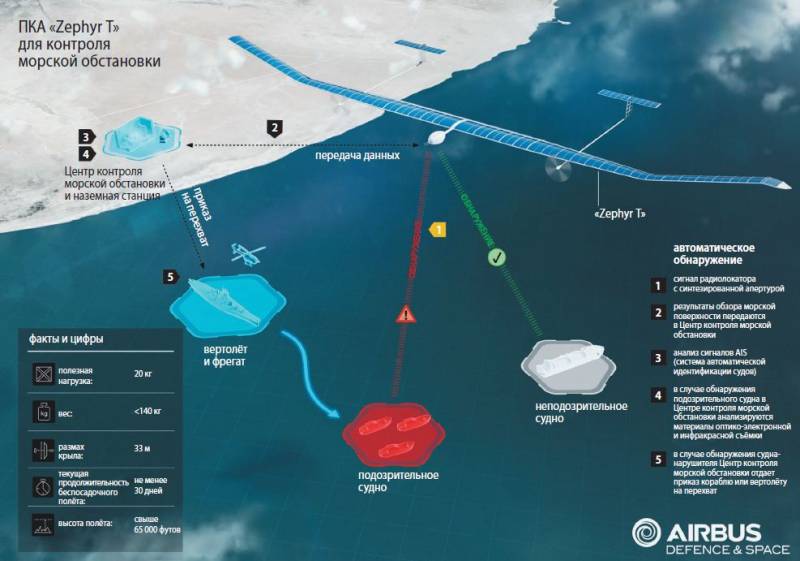 Illustration of the Airbus Zephyr pseudo-satellite application. Source: NPO Lavochkina JSC
Compared to classical satellites, high-altitude drones are naturally much cheaper and are closer to the Earth, which ensures high quality shooting and observation. The mentioned Airbus Zephyr is 10 times cheaper than Global Hawk and 100 times cheaper than World View satellites. In this case, the pseudosatellites are located below the ionosphere, which increases the accuracy of navigation and the determination of the location of radio emission sources. Unlike a satellite, an aircraft is capable of hovering over the object of observation for a long time, like an eagle, tracking all the changes taking place below. 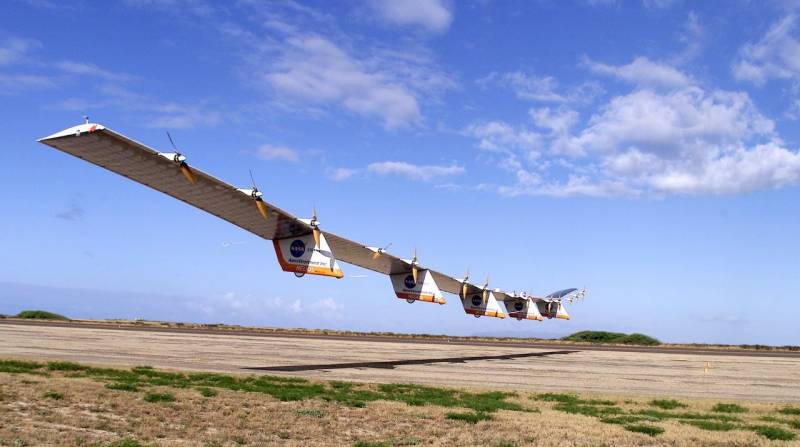 One of the prototypes of the Helios drone. Source: ru.wikipedia.org
What is the concept of a pseudo-satellite for stratospheric flight? It is a lightweight composite airframe with good aerodynamic characteristics, equipped with highly efficient solar panels, batteries and fuel cells. In addition, highly efficient electric motors, lightweight control devices with low energy consumption, capable of promptly and independently reacting to emergency situations in flight are required. Such high-altitude vehicles are distinguished by their low carrying capacity (up to 100-200 kilograms) and extreme slowness - up to several tens of kilometers per hour. The first of these appeared in the 1980s in the United States.

Experimental pseudo-satellites of the HALSOL program were the first among such devices in the USA. Nothing sensible came of them due to the elementary lag in technology: there were no capacious batteries or efficient solar cells. The project was closed, but the appearance of the prototypes was not declassified, and the initiative passed to NASA. In 1994, its specialists presented their Pathfinder, which became, in fact, the gold standard for future pseudo-satellites. The device had a wingspan of 29,5 meters, a take-off weight of 252 kilograms and an altitude of 22,5 kilometers. Over the course of several years, the project has been repeatedly modernized; the last in the series was the Helios HP, whose wings were stretched to 75 meters, and the takeoff weight was caught up to 2,3 tons. This device in one of the generations was able to climb to 29 meters - a record for horizontally flying aircraft without jet engines. Due to the imperfect hydrogen fuel cells, Helios HP collapsed in the air during the second flight. The idea of ​​its restoration was not returned.

The second known model of a dual-use pseudo-satellite can be called the Zephyr family from the British QinetiQ, which appeared on the artificial horizon in 2003. After extensive testing and design improvements, the project was bought by Airbus Defense and Space in 2013 and developed into two main models. The first has a wingspan of 25 m and includes: a glider made of ultra-light carbon fiber, solar panels made of amorphous silicon from United Solar Ovonic, lithium-sulfur batteries (3 kWh) from Sion Power, an autopilot and a charger from QinetiQ. Solar panels generate up to 1,5 kW of electricity, which is enough for a round-the-clock flight at an altitude of 18 km. The second, larger pseudo-satellite was the Zephyr T with two tail booms and an increased wingspan (from 25 m to 33 m). This design allows lifting four times the payload (weighing 20 kg, sufficient to accommodate a radar station at an altitude of 19500 m).

Zephyr has already been contracted by the armies of Great Britain and the United States in single quantities. They had not yet had time to fully get used to the troops, when in March 2019 one of them crashed near an assembly plant in Farnborough, Hampshire. In this accident, the main drawback of such aircraft was revealed in full glory - high sensitivity to meteorological conditions during takeoff and landing. At working heights of many kilometers, precipitation and wind are not terrible for pseudo-satellites, but at the ground they feel uncomfortable. 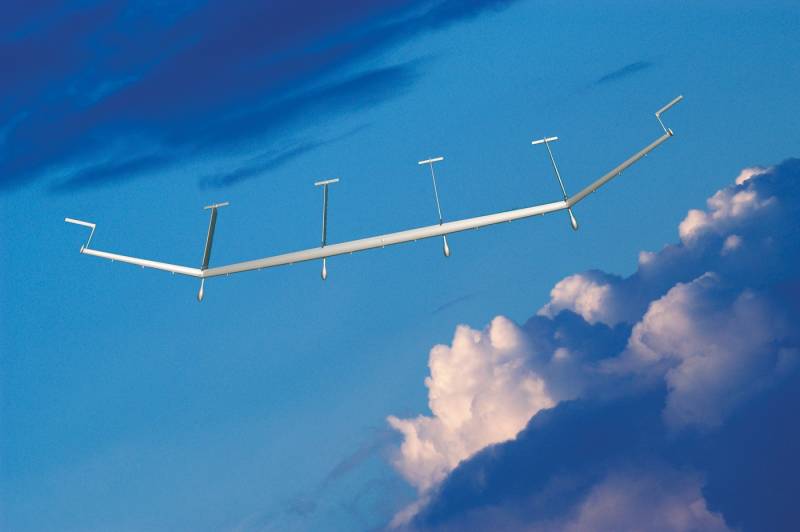 Solar Eagle. Source: newatlas.com
DARPA also did not stay away from such a promising topic and in the late 2000s initiated the VULTURE program (Very-high Altitude, Ultraendurance, Loitering Theater Element - a super-high-altitude surveillance system with ultra-long loitering over a theater of operations). The firstborn was the Solar Eagle pseudo satellite, created by Boeing Phantom Works in conjunction with QinetiQ and Venza Power Systems. This giant has a wingspan of 120 meters, lithium-sulfur batteries, and eight motors powered by both solar panels and hydrogen cells. Currently, the Americans have classified the project and, most likely, are already testing the Solar Eagle in the form of pre-production prototypes. 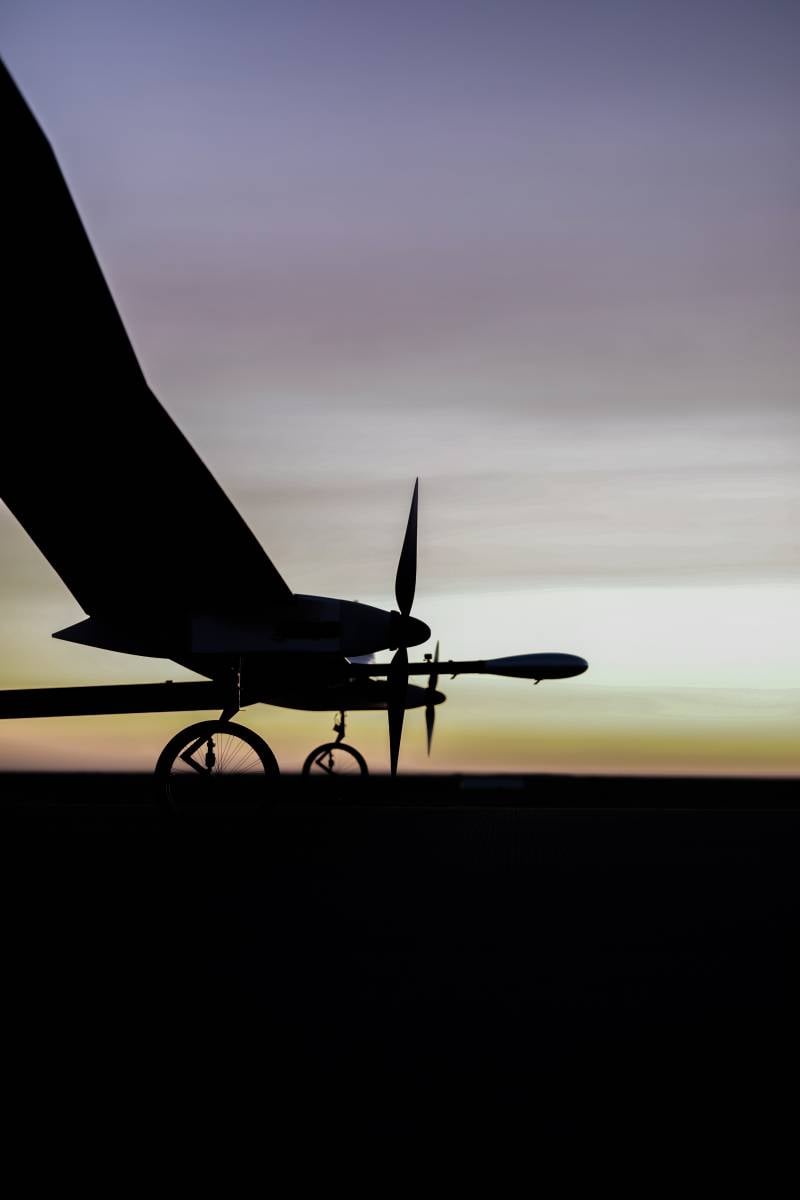 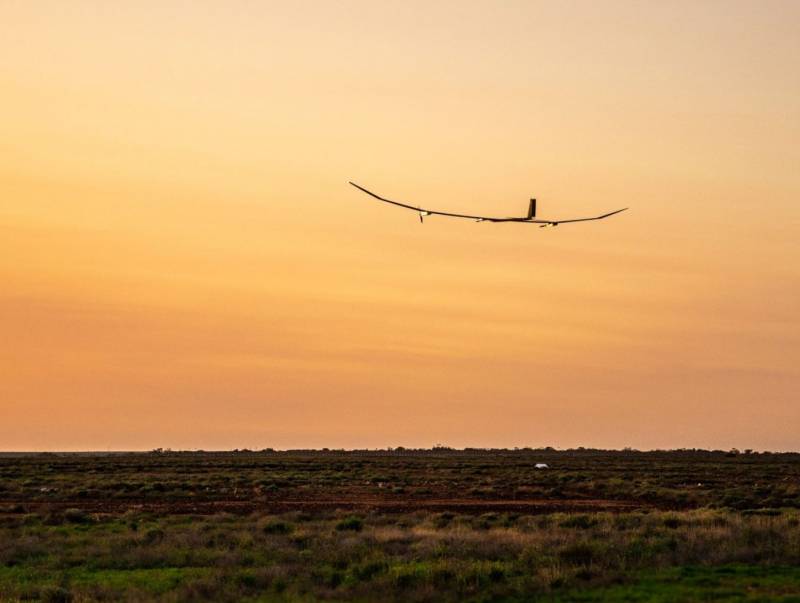 PHASA-35 Source: prismaticltd.co.uk
The most modern of the unclassified prototypes is a pseudo-satellite jointly developed by BAE and Prismatic Ltd - PHASA-35 (Persistent High Altitude Solar Aircraft, long-term high-altitude solar aircraft). In February 2020, it was launched into the air for the first time at the RAF airbase in South Australia. The flying solar panel with wings is capable of climbing 21 kilometers and carrying a payload weighing up to 15 kilograms. By the standards of high-altitude drones, the PHASA-35 has a small 35-meter wingspan and is designed, as the developers themselves write, for monitoring, communication and security. However, the initial and main path of the pseudo-satellite will be combat work. In this regard, following the results of the first flight, Ian Muldoney, Technical Director of BAE Systems, commented:

This is an outstanding early result and demonstrates the pace that can be achieved when we combine the best of British capabilities. Moving from design to flying in less than two years (20 months) shows that we can rise to the challenge the UK government has put before the industry to build the future air combat system over the next decade.
By the end of this year, it was planned to complete the tests and, after 12 months, transfer the first production vehicles to the customer. But the pandemic, of course, will make its own adjustments within the specified time frame. 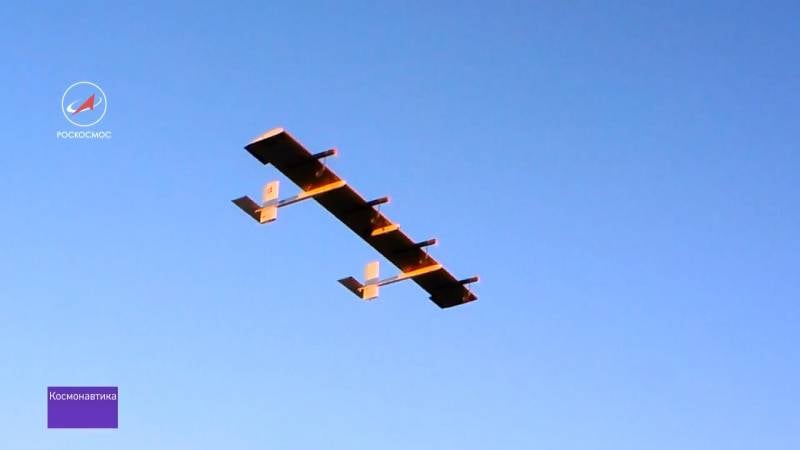 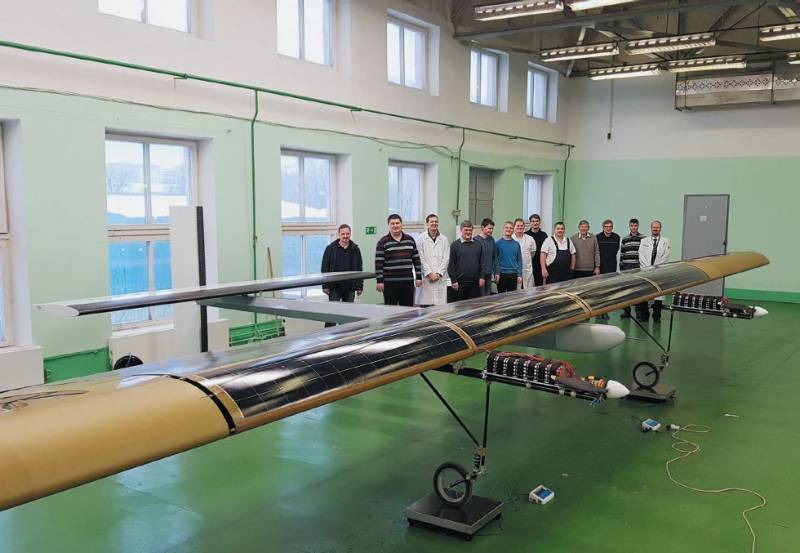 The second pseudo-satellite, LA-252 "Aist", is still under development. Source: NPO Lavochkina JSC
Now there is a steady growth in interest in such high-altitude drones, and the expansion of the development area is proof of this. In addition to the successes of China, India, Taiwan and South Korea, Russian design bureaus are involved in the design of pseudo-satellites. The first domestic experimental high-altitude drone was developed at the S.A. Lavochkin and named LA-251 "Aist". It was presented for the first time at the Army-2016 forum. The drone is made according to the normal aerodynamic design and is a free carrying monoplane with a wingspan of 16 m and a mass of about 145 kg. The monoplane has two tail booms, four 3 kW engines, and is equipped with a 240 Ah battery. Flight altitude up to 12 thousand meters, duration up to 72 hours. A larger "Aist" with a wingspan of 23 meters and a payload of 25 kg is now being developed. Such a pseudo-satellite already rises 18 kilometers and can be in the air for several days. For the sake of lightening the design, the aircraft was left with one beam and the number of motors was reduced from four to two. The further development of the domestic theme of pseudo-satellites is hindered by the lack of technologies for the production of lithium-sulfur batteries with a specific energy output of 400–600 Wh / kg. In addition, solar panels with a specific gravity of 0,32 kg / m are needed.2 with an efficiency of at least 20%. In many respects, it depends on this whether Russia will be able to reduce the existing gap with world leaders. With such a gigantic territory, our country simply cannot do without such pseudo-satellites in the future.