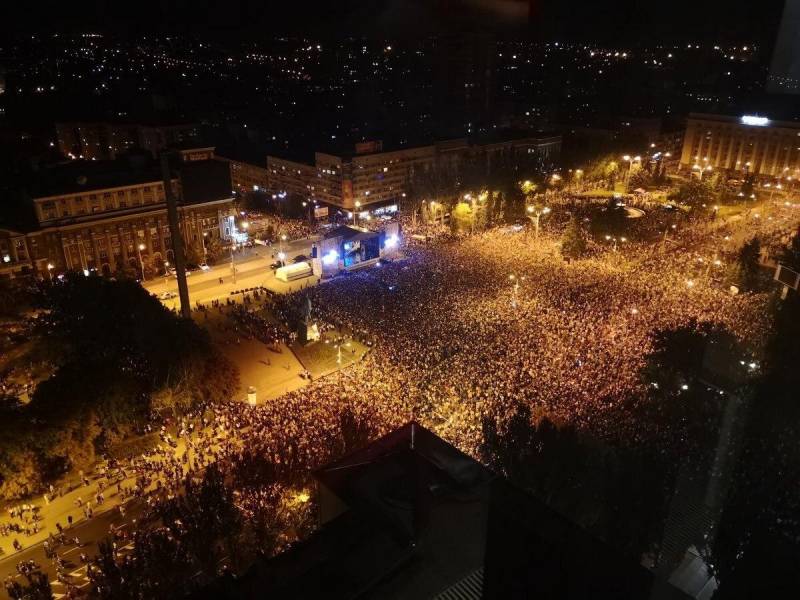 The ceasefire in Donbass continues, despite the fact that the OSCE SMM has recorded a total of 1000 ceasefire violations since the beginning of the ceasefire. According to the patriotic sentries on both sides of the demarcation line, the NM LPR and the Armed Forces of Ukraine still suffer losses that are not included in the official statistics. So, Igor Girkin (Strelkov) speaks about 23 victims of the LPNR. War correspondent Alexander Sladkov, who works in the DPR, also reports on the losses:

“Speaking in Russian, the Ukrainian military is deceiving the Donbass, the West, and Russia. They do not stop fighting the DPR and LPR. But to them "... everything is God's dew", no one decree for them. On the other hand, here's the situation: a Ukrainian sabotage group comes into the rear of the DPR (military unit I know), successfully mines the route of a military transport, a people's militia car is blown up at MON-90, losses. The "analysis group" arrives at the same place. Ukrainian saboteurs in pursuit also undermine a radio-controlled land mine. Again, losses. The funeral".
Nonetheless, Donetsk displays an amazing peacefulness. Accusing the Armed Forces of Ukraine of equipping positions in the "gray zone" near the village. Noises, the head of the DPR Denis Pushilin announced his readiness to destroy the Ukrainian defensive midfielders and scheduled shelling for September 3, then postponed the date to September 7, and then to September 9. But on the appointed day, predictably, instead of shells, only a call to convene a meeting of the trilateral contact group flew in the direction of the Ukrainian positions to discuss and condemn the unholy behavior of the Ukrainian Armed Forces.

What was the point of shooting yourself in the foot, discrediting the authorities and the military with unfounded promises? Unclear. To be honest, I wanted to believe until recently that in this situation in Donetsk they thought everything out well before making loud statements, and are really ready to bomb the dangerous area occupied by the Ukrainians. Instead, we are once again witnessing astral karate with invisible and imperceptible blows to the image and reputation of Kiev. As if the barbarians professing fascism and killing their own population might have some kind of reputation.

However, it is unlikely that this whole idea belongs to Pushilin or his advisers (especially since the head of the DPR is the commander-in-chief purely nominally and has no real power over the military). Rather, it is the superior authorities who amuse themselves. But why do they act like this, substituting and humiliating the Donetsk authorities? Big mystery. Was it really impossible to think over a way out of this situation (or simply not to create it)? What was the sacred meaning and what practical results did this action have, apart from direct damage to the image of the government and the republic itself, a decrease in fighting spirit, etc.?

It seems that while one team is trying to raise the spirits of the inhabitants of the LPR and reassure them by holding brace and spirit-lifting events (they sang the anthem of Russia with Leps - it's good!), The other team is doing everything so that both soldiers on the front line and civilians the rear was sad and ashamed. Much can be understood; attributed to political undercover games, but clearly not that.

The bad habit of the commanders of the 1st Army Corps has been discussed more than once about the imminent and inevitable "offensive in the Mariupol direction", planned sabotage, etc. This passion for "fried" news and regular hysterical and hysterical notification of citizens about invented threats is guaranteed to lead to the fact that such news begins to be perceived as white noise. So, if tomorrow the conditional Basurin is to announce a real threat, he will have to pull out the rest of his hair in order to be taken seriously.

Here the situation is similar: announcing from time to time about the readiness to lower the punishing hand on the enemy, in order to then drain everything into the toilet, the anonymous authors of these events are guaranteed to achieve complete rejection among the defenders of Novorossiya. When no one will take seriously not only such statements, but also the ability of the people's militia to take decisive action in general.

Ctrl Enter
Noticed oshЫbku Highlight text and press. Ctrl + Enter
We are
Situational analysis of the death of the MH17 flight (Malaysian Boeing 777), made on the basis of engineering analysis from 15.08.2014Results of the week. “You are already indebted to the sea: neither the bottom nor the coast”
18 comments
Information
Dear reader, to leave comments on the publication, you must to register.