North Korea is preparing to launch a ballistic missile "Pukkykson-3" 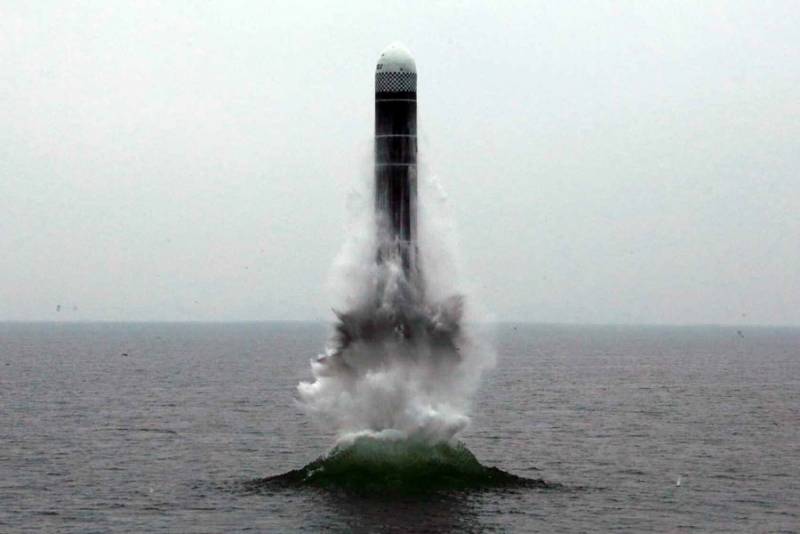 The DPRK continues to build its nuclear forces, and a promising ballistic missile of submarines "Pukkykson-3" should become their new element. The first launch of an experimental product of this type took place almost a year ago, and a new flight test may be carried out in the near future. American analysts have noticed signs of preparation for such an event.

On September 4, the American research project Beyond Parallel (Center for Strategic and International Studies, CSIS) published reports of recorded activity at several sites in the DPRK. Project analysts believe that the observed actions and movements are associated with the preparation of tests of a promising SLBM.

The conclusions are based on recent satellite images of the Sinpo shipyard provided by Airbus. The first of them shows the fenced protected water area of ​​the plant. There is already a well-known submersible bench-barge for testing SLBMs, as well as several previously absent ships. CSIS believes that these are tugs, and in the near future they will have to bring the stand to the open sea for an experimental launch of the Pukkykson-3 (Polar Star-3) rocket.

A light camouflage cover measuring 102x13 m is deployed at the pier next to the stand. Under it, presumably, there is a diesel-electric submarine "Sinpo", capable of carrying ballistic missiles. However, there is no clear evidence of the presence of this diesel-electric submarine yet. Another object in the port was identified as a midget submarine. She has nothing to do with trials, and therefore stands on the shore.

Another satellite image shows activity at a ground site near the plant. Various cars and other equipment are observed near the experimental launcher - a similar picture took place before the previous tests. 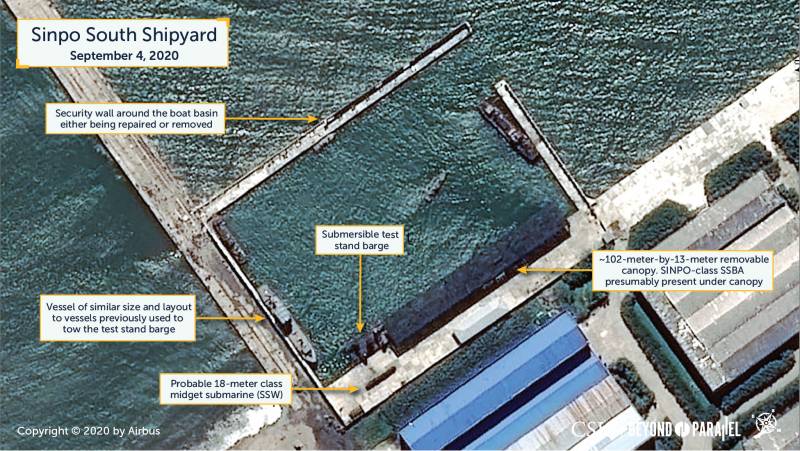 Water area in Sinpo
The third photo shows the bay of the Mayangdo submarine base. On September 4, two Type 033 diesel-electric submarines were anchored in the bay. They may have moved away from the berths for training activities, but CSIS does not exclude the possibility of two submarines participating in the observation of a test launch of a new SLBM.

Analysts at Beyond Parallel suggest that the new launch of the Pukkykson-3 missile may take place after September 9 and before October 10 - between the DPRK public holidays. This explains the observed activity in Shinpo.

The first test launch of a promising SLBM from a carrier submarine in a submerged position took place on October 2, 2019.Due to the special importance of the project, information about the tests and several interesting photographs were officially published by the CTAC. It was reported that the design characteristics were fully confirmed and the launch did not have any negative impact on the environment.

Soon, the South Korean Ministry of Defense published some data obtained from tracking the launch. The rocket was flying along an altitude trajectory. Its highest point was at an altitude of 910 km; while the launch range was 450 km. According to foreign intelligence services, when using other trajectories, the firing range can exceed 2-2,1 thousand km. Thus, the Polar Star-3 SLBM belongs to the class of medium-range missiles.

According to various estimates, the rocket has a multistage scheme and is equipped with solid-propellant engines. Dimensions and launch weight are unknown. There is also no information on combat equipment. Apparently, a nuclear warhead is being used. 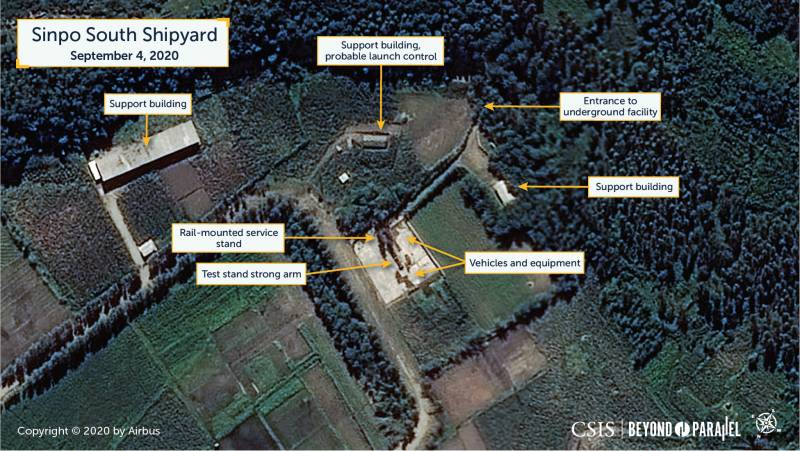 Land range
The experimental carrier of the new missile is the Sinpo submarine or Sinpo-B. This is a diesel-electric ship no more than 70 m long with a total displacement of up to 2 tons. On board the submarine, it was possible to place only one silo launcher for a promising line of missiles. Previously, with the help of Sinpo, tests of SLBMs of previous types were carried out.

The Beyond Parallel project believes that preparations for a new test launch of a promising SLBM are underway at the Sinpo shipyard. This event - if completed successfully - will advance the project and bring the rocket into service closer to the date. How soon and with what results all the necessary tests will be completed is unknown.

The Pukkykson-1 rocket was tested from 2014 to 2017. During this time, 12 launches were carried out, and 8 were successful. The next product was launched only twice in 2017 and both launches were successful. So far, the Polar Star of the third model has flown only once, and a second launch may take place in the near future. Further plans of the DPRK, for obvious reasons, remain unknown.

According to foreign data, the next missile submarine is being built. The ship with the symbol Sinpo-C will be longer and larger than the existing diesel-electric submarine. With a displacement of at least 3 thousand tons, it will be able to carry three SLBMs of the Pukkykson-3 type at once. As of the spring of 2019, the promising submarine was under construction. New information about her has not yet been received.

Over the past several years, the DPRK has been working on the creation of a naval component of the strategic nuclear forces. Due to the limited capabilities of industry and the economy, such processes are not distinguished by high rates, but the results achieved so far and expected events look very interesting. 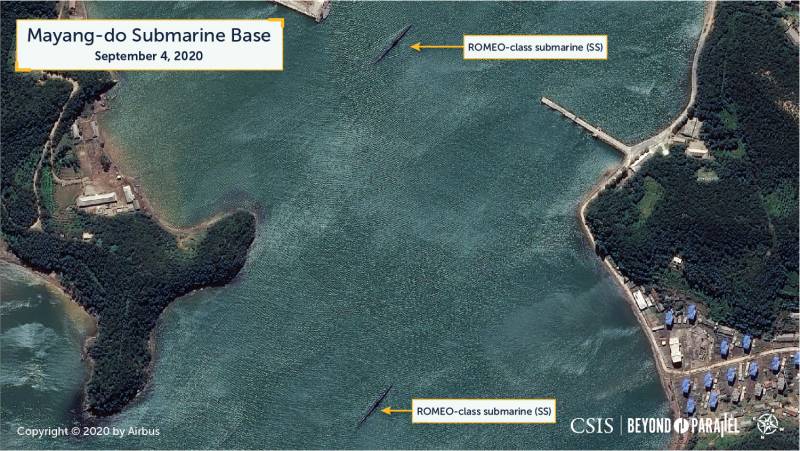 Submarines in Mayangdo Bay
Over the next few years, upon completion of current projects, the DPRK Navy will have two strategic missile-carrying submarines. With their help, it will be possible to deploy up to four SLBMs of its own North Korean design. In this case, we are talking about medium-range missiles capable of hitting objects at distances of at least 2 thousand km.

Thus, at first, the submarine component of the strategic nuclear forces will have minimal dimensions and more than a modest potential. The capabilities of such forces are limited, first of all, by the class of carrier ships. Diesel-electric submarines in our time, due to a number of characteristic features and shortcomings, cannot be effective carriers of SLBMs and cannot compete with nuclear submarines.

The limited range of the Polar Star missiles makes it necessary to push the launch lines to a dangerous proximity from the borders of a potential enemy. In addition, only two submarines with a common ammunition load of four missiles can hardly be considered a serious threat to the main opponents of the DPRK. However, the increased risks will force them to strengthen their anti-submarine defense.

The DPRK continues to build the naval component of the "nuclear triad" and is already showing some success. In the coming years, it will be possible to begin regular visits to patrol areas for military service and nuclear deterrence. There is no talk of full-fledged competition with developed nuclear powers - but the Navy will have the opportunity to deliver a painful retaliatory strike. Together with it, there will be a new argument for disputes in the international arena.

To obtain such opportunities, North Korea needs to implement several new projects. According to reports from abroad, a new test launch of the Pukkykson-3 SLBM is becoming an urgent task for the coming weeks or even days. When the next "Polar Star" flies, what impact will this launch have on the development of the underwater fleet and how the situation in the region will change - time will tell.

Ctrl Enter
Noticed oshЫbku Highlight text and press. Ctrl + Enter
We are
The nuclear baton of the US Navy (part 8)Missile attack on Europe: myth or reality?
Military Reviewin Yandex News
Military Reviewin Google News
51 comment
Information
Dear reader, to leave comments on the publication, you must to register.