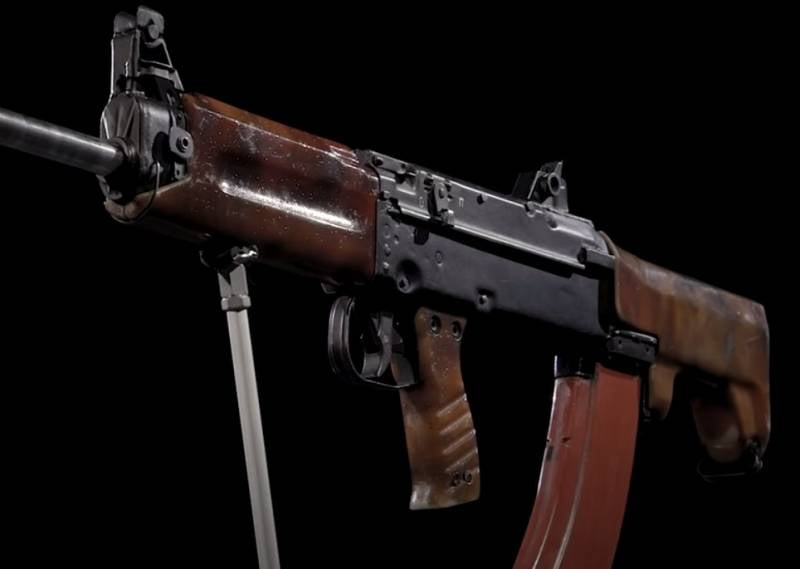 In the world of automatic rifle weapons sometimes quite unusual models come across. Features of their design and appearance distinguish them from other machines. But the most unusual, as a rule, are machines that never got into mass production.


Perhaps the most productive years for the creation of "strange" machines were the 1960s - 1970s. At the height of the Cold War, the military departments of many countries were interested in finding the most effective solutions for creating rapid-fire and powerful automatic weapons. In turn, the designers, wishing to satisfy the demands of the military, offered more and more extravagant ideas.

For example, back in 1963-1965, the Soviet designer Nikolai Mikhailovich Afanasyev developed a very interesting prototype of the TKB-011 assault rifle (Tula Design Bureau). It was one of the first machines with a bullpup layout, in which the trigger is pulled forward and is located in front of the magazine and the firing mechanism. This arrangement made it possible to shorten the length of the weapon without the need to shorten the barrel length and the associated decrease in accuracy and accuracy of fire.

In one of the articles published in the American magazine The National Interest, the TKB-011 submachine gun and another Soviet submachine gun, the TKB-022 designed by German Korobov, were compared to "alien weapons", focusing on their unusual appearance. But even more interesting is the TKB-1046 assault rifle.

The development of the TKB-0146 assault rifle was carried out under the guidance of the famous designer Igor Yakovlevich Stechkin, which is why he received the unofficial name "Stechkin assault rifle". The weapon was developed for participation in the "Abakan" competition, announced by the USSR Ministry of Defense in 1978 to determine the most effective assault rifle with better performance compared to the assault rifles already in service with the Soviet Army. 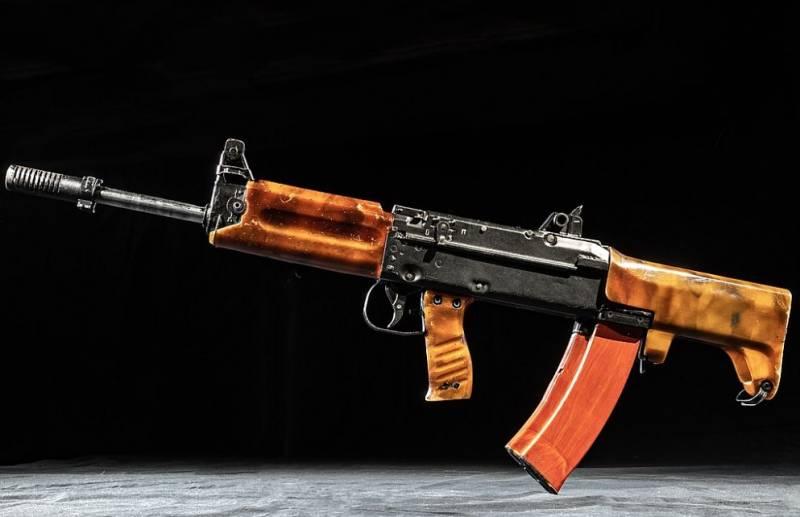 Like TKB-011 and TKB-022, TKB-0146 was assembled according to the bullpup principle, and the automatic action in this weapon was based on the removal of powder gases from the bore through the side hole. In the machine, the principle of a displaced recoil impulse was implemented with a stationary magazine using a two-stage cartridge feed from the magazine to the chamber.

But the most impressive feature of the TKB-0146 assault rifle was, of course, the ability to fire almost 2 rounds in automatic mode. By the way, it was the excessive consumption of cartridges that became one of the reasons why TKB-0146 was still rejected and did not enter mass production.

American designer David Dardik is better known to us for his "pistol revolvers". However, his company, which produced hybrids of pistols and revolvers, did not last long. But in the early 1960s. David Dardik decided to participate in a program to develop automatic weapons with an increased rate of fire, bullet speed and accuracy of fire. 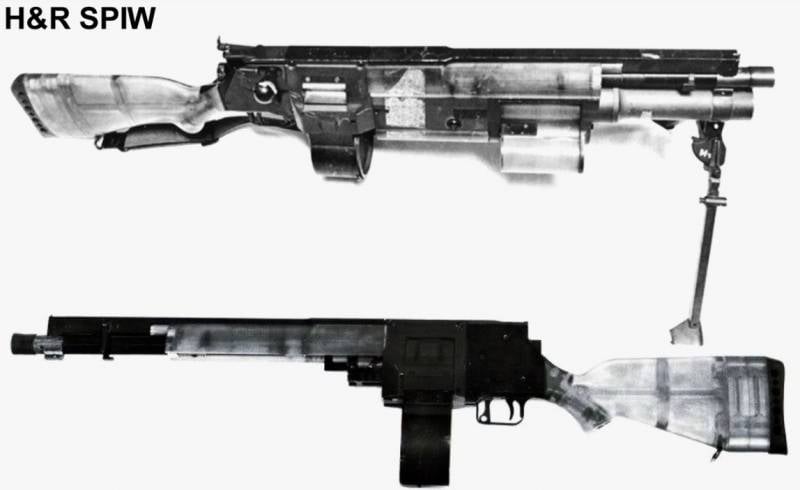 As a result, in 1964, David Dardik introduced the H&R SPIW assault rifle. It was equipped with a three-shot underbarrel grenade launcher with a revolving feed. Naturally, Dardik reproduced in the new weapon the drum feeding system used in Dardick pistols. The machine gun had three barrels, it was loaded with cartridges with a plastic sleeve. Bullets flew at speeds up to 1400 m / s. Automatic fire had a rate of 500 rounds per minute.

The H&R SPIW assault rifle fired volleys from three barrels, which made it possible to increase the accuracy of fire without the need to complicate the design of the weapon. But this solution looked beautiful only on paper: in reality, the accuracy of fire was lower than that of competitors' machines, the machine itself was twice as heavy as prescribed by the terms of the competition, and its safety for the shooter left many questions. As a result, the machine gun was not allowed to the main part of the tests, and the contract with Dardik was terminated. 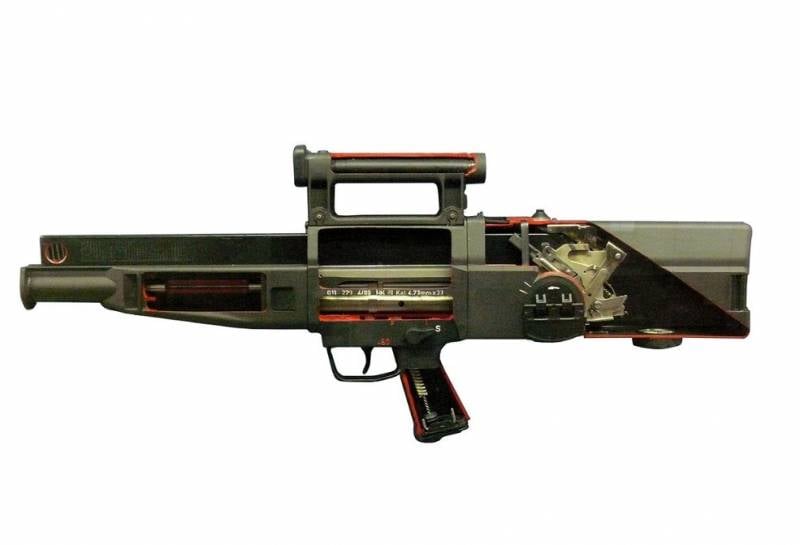 Naturally, the FRG also conducted its own developments in the field of automatic weapons during the Cold War. Heckler & Koch, together with Dynamit Nobel AG, during the 1970s and early 1990s. worked on a project for an automatic rifle G11. As a result, in the early 1980s. a machine gun appeared in a plastic case resembling a trapezoid, where the protruding parts were only a fire control handle and an optical sight.

The G11 assault rifle worked according to the bullpup scheme, fired with a caseless cartridge, the magazine was located above the barrel. The G11 used a fire monitor, that is, the barrel, magazine and breech were mounted on the same base.

However, the test results of the new automatic rifle did not suit the military. She showed her unreliability, the incredible complexity of the mechanism, the cartridges turned out to be overly fragile. As a result, the Bundeswehr never accepted the new rifle for service, and its project was gradually phased out and forgotten.

Ctrl Enter
Noticed oshЫbku Highlight text and press. Ctrl + Enter
We are
Commentary on A. Petrov's interview “Fire and Tactics in the Russian Army: Another Look”List of destroyed the largest and most high-tech enterprises
45 comments
Information
Dear reader, to leave comments on the publication, you must to register.