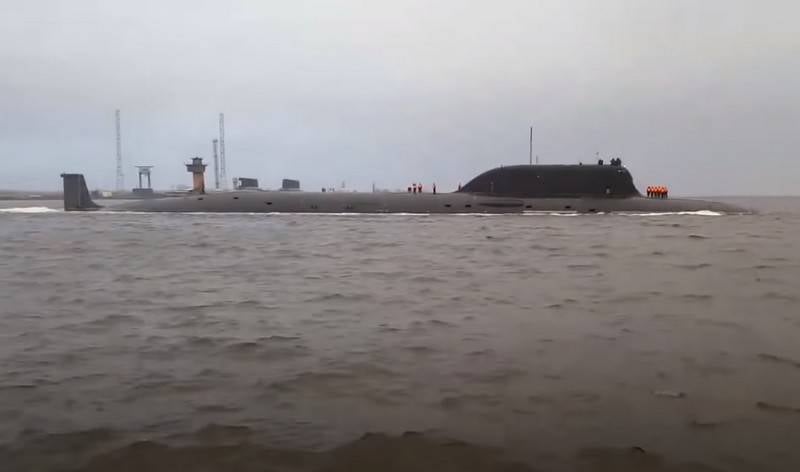 The lead multipurpose nuclear submarine "Kazan" of project 885M "Yasen-M" returned to Severomos from the next stage of sea trials, which took place in the waters of the White Sea. The press service of the Northern fleet.

During the exit to the White Sea, the crew of the Kazan nuclear submarine performed surface and submerged navigation, worked out elements of the combat training course mission, and also measured a number of the ship's technical parameters, for example, the noise of the underwater passage. After completing the assigned tasks at sea, the ships and vessels arrived at the permanent basing point - Severodvinsk
- said in a statement.

The exit of "Kazan" for testing was provided by the submarine cruiser "Dmitry Donskoy" and the support vessels of the White Sea naval base.

In June of this year, it became known that the state tests of the Kazan nuclear submarine would take place in the fall. In the absence of complaints, the submarine will enter the fleet by the end of 2020. At the same time, it is not ruled out that the delivery dates may be postponed to 2021 for various reasons.

Earlier, the Ministry of Defense announced the entry of the Kazan submarine into the Navy until the end of 2019, but subsequently the deadlines for the ship were postponed due to problems discovered. The results of the mooring, as well as the winter stage of the factory sea trials, completed in January last year, showed that a number of auxiliary systems of the Kazan submarine do not meet the requirements of the Ministry of Defense. The submarine was sent for revision at Sevmash.

Ctrl Enter
Noticed oshЫbku Highlight text and press. Ctrl + Enter
We are
The Kazan submarine of the 885M Yasen-M project has entered the factory sea trialsIn the near future, the Russian Navy will include seven multi-purpose nuclear submarines Yasen and Yasen-M, the commander in chief
22 comments
Information
Dear reader, to leave comments on the publication, you must to register.