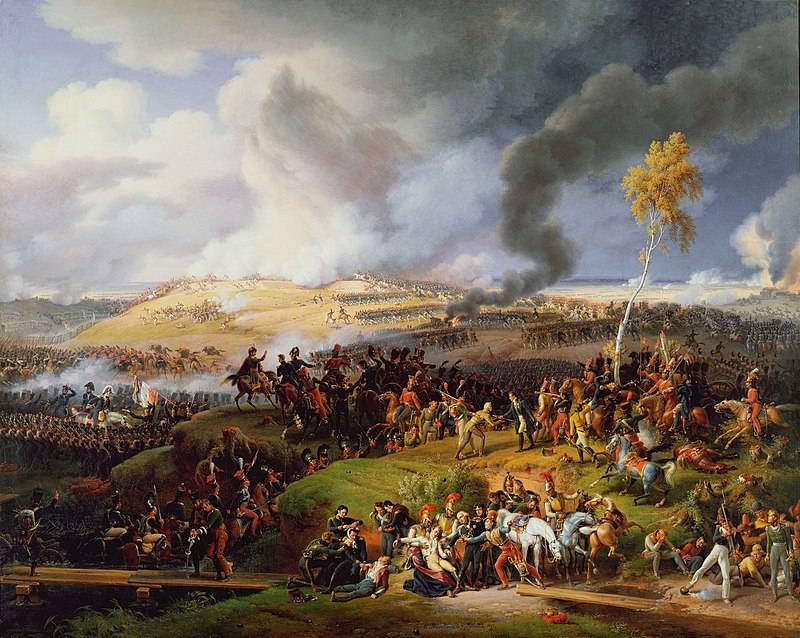 Louis Lejeune (1775-1848). "Battle of Borodino. The Battle of the Moskva River on September 7, 1812 ". In the foreground, center, General Lariboisiere (gray-haired) mourns the death of his son, a carabinieri officer. To the left and above Marshal Murat (in an old Polish costume) with his headquarters. The painting was painted in 1822 Palace of Versailles

You will not see such battles ...
M. Yu. Lermontov. Borodino

Documents and история. Of course, it is desirable that the date on the calendar is different now. Let's say 2022. Then we would have had the 210th anniversary of the Battle of Borodino, and any round date in our country is a very special thing in terms of information. But what is not, that is not. But September 8 is the Day of Russian Military Glory (although it would be more correct to establish it on the 7th). There is also a great interest in the battle, and it is not waning, as evidenced by the comments of the activists of "VO" in the articles on arms war of 1812. Weapons! And then what can we say about the war itself or the same Borodino battle? But what do we know about it if the theory of nuclear war from 1780 to 1816 is in vogue now, into which the Battle of Borodino simply does not fit. However, let's begin our acquaintance with this event, seemingly known to all of us. Who in school did not memorize "Borodino" by M. Yu. Lermontov? .. Let's start with what usually any research begins with historiography: who, what and when has already written about this event and how exactly the views of one historian differ from views of the other. And God bless them, with views. Let's take a look at the numbers, which are usually never taken out of the head, but are always based on some kind of documents.

Well, this time the photocopies of pages from the popular Russian magazine "Niva" for 1912 will serve as the design for this material of ours. I am sure that few VO readers have ever seen this magazine or held it in their hands. Meanwhile, this is a very, very interesting source of our knowledge about the past, both textual and illustrative, since many photographs have been placed in it since the end of the 1898th century, and, of course, there were a lot of drawings and engravings in it too. As a child, I just loved looking at the stitched binders of this magazine, which were collected in our old wooden house from 1917 to XNUMX! Now, alas, they have been gone for a long time (as a student, I dragged all of them to the Bukinist store), but the library of the Penza Regional Museum of Local Lore is now at my service, so the loss turned out, in general, not so great. 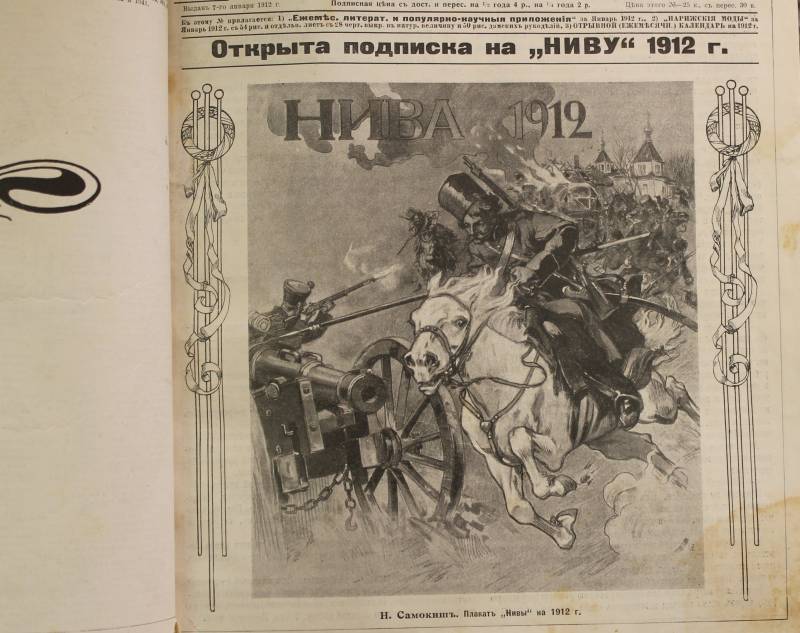 Cover of the jubilee magazine "Niva" for 1912
Well, now let's think about what issue related to the history of the Battle of Borodino is the most controversial up to the present time? The question of the number of participants in the battle and the losses incurred by the parties! In the Soviet historiography of the 1950s, data on the ratio of the types of troops on the eve of the battle were as follows: 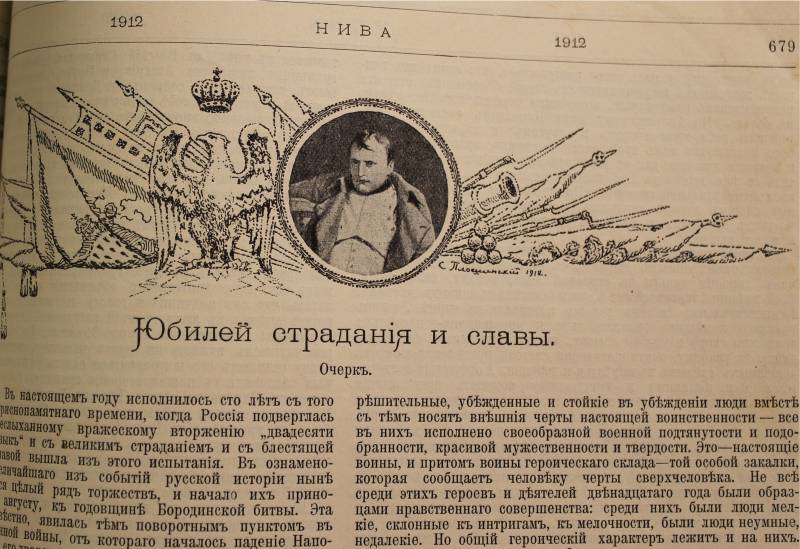 In 1912, three Niva magazines published a large article detailing the events of a century ago. This is its beginning. Yes, that was the way it was written at that time. Such is the "calm". But isn't it a wonderful phrase to be found at the bottom right? We read: “… among them were small people, inclined to intrigue, to pettiness, there were people who were stupid, narrow-minded. But the general heroic character lies with them too! " How correctly noted, isn't it? And is it not possible to say all the same about the personalities of the Great Patriotic War of 1941-1945? You can, of course. But only for a long time it was impossible ... I wonder what will be said about them in 2045, when time itself will quench passions ...
However, has this data always and everywhere been and is used? Well, anyone can look into Wikipedia today, libraries still keep the "Soviet Military Encyclopedia" in 8 volumes, so it's easy to check these numbers. But are there others and to whom, I wonder, do they belong? Let's look at both the numbers themselves and the personalities of those who named them, as well as the works that they devoted to the theme of the war of 1812. Let's start from the very beginning, that is, with eyewitnesses and direct participants in those heroic events. 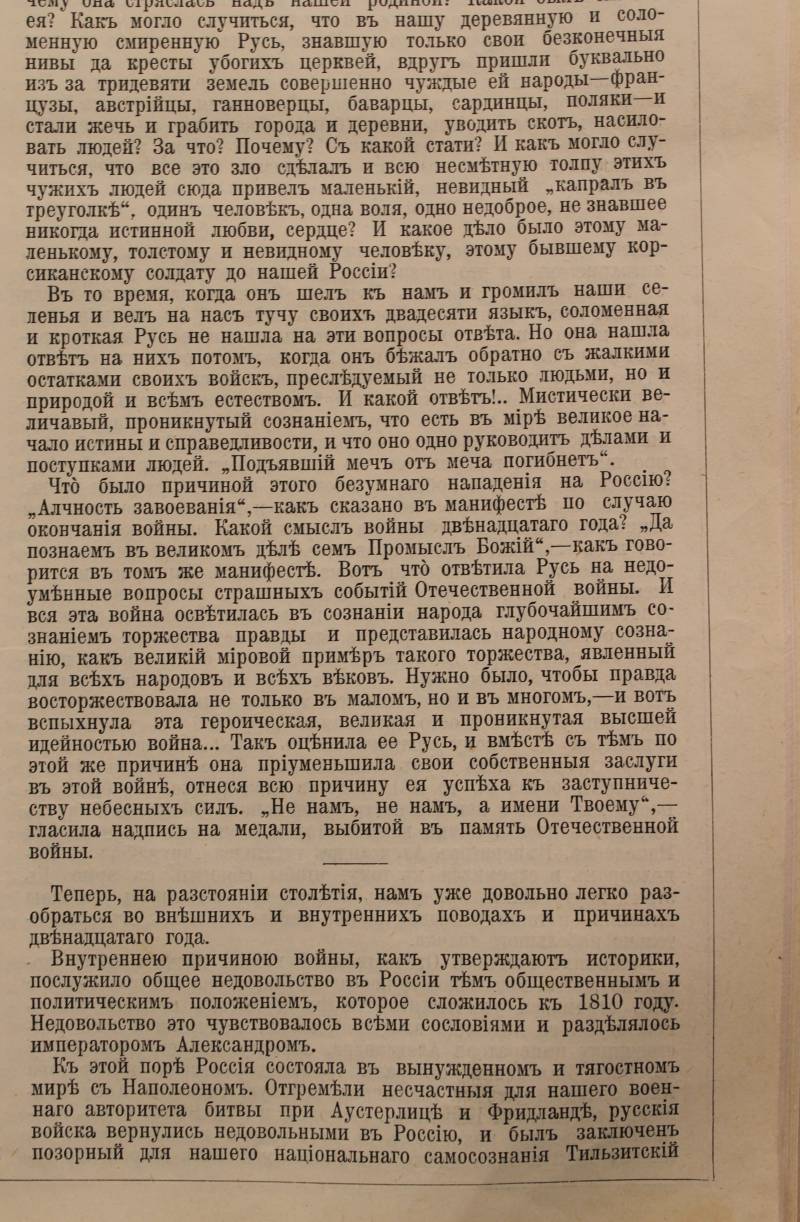 And here the author reflects on the reasons that prompted Napoleon to attack Russia ...
2. Philippe-Paul de Segur (1780-1873), French brigadier general from the entourage of Napoleon. Author of the book “A Trip to Russia. Notes of the Adjutant of Emperor Napoleon I ", Smolensk: Rusich, 2003. He believed that the French were 130 thousand, Russians - 120 thousand. Year: 1824.

3. Georges de Chambray (1783-1848), marquis, French general of artillery. He left a work on the history of the Napoleonic wars, based on a huge amount of materials from French archives. He has 133 thousand Frenchmen, 130 thousand Russians. The year of publication of these figures is 1825. 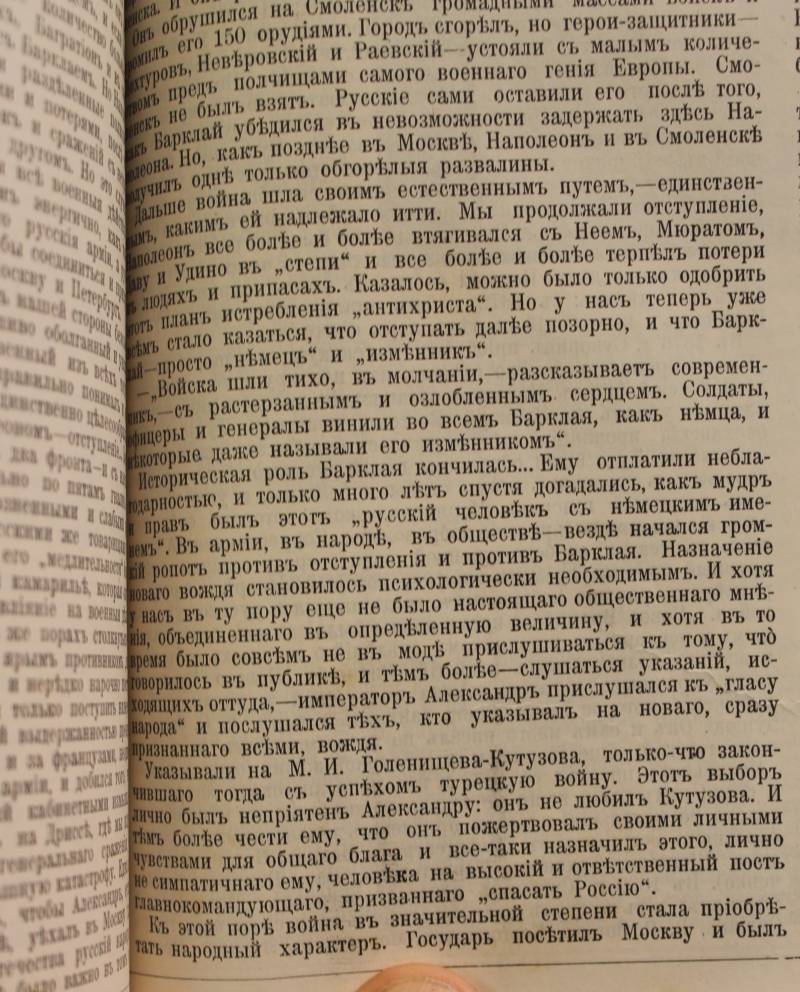 Another interesting passage about the events of those distant years. But it is not written that Napoleon's plans were revealed by Russian intelligence, that the Emperor Alexander knew about the intention to defeat the Russian army in a border battle and even about the number of troops he led. Everything was known to him, and to the unfortunate Barclay, and Kutuzov. But they did not dare to say this out loud even after a hundred years. What a war that was won thanks to ... spies!
4. Karl Philip Gottlieb von Clausewitz (1780-1831), Prussian military leader, military theorist and historian. In 1812-1814 he served in the Russian army. The author of the essay "1812". Moscow: State publishing house of the USSR People's Commissariat of Defense, 1937; reprint: 2004. He has 130 thousand French, 120 thousand Russians. 30s of the XIX century.

5. Alexander Ivanovich Mikhailovsky-Danilevsky (1789-1848), lieutenant general, senator, Russian military writer, historian, author of the first official history of the Patriotic War of 1812, written in four volumes on the personal assignment of Emperor Nicholas I, and published in 1839 ... In his books, the French at Borodino - 160 thousand, Russians - 128 thousand. 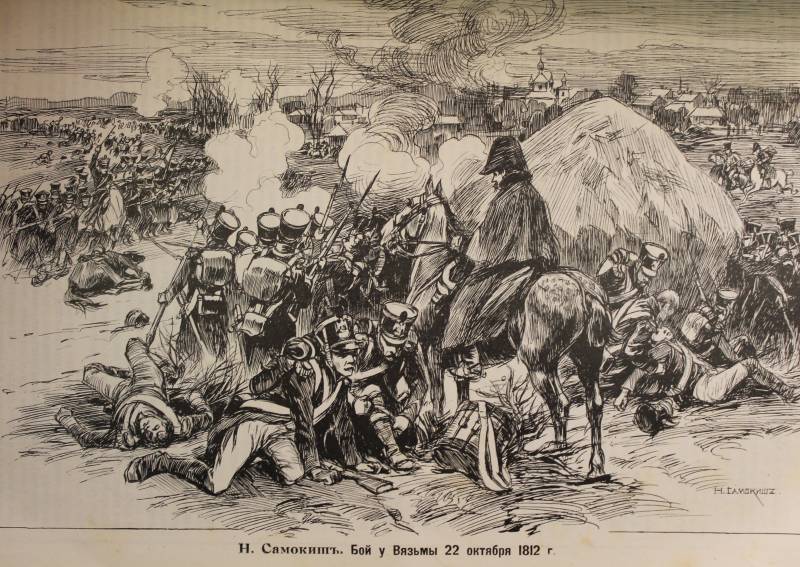 An excellent illustrative material for the theme of the war of 1812 in the "Niva" magazine was the graphics of the artist N. Samokish
6. Modest Ivanovich Bogdanovich (1805-1882), Russian military historian; lieutenant general, member of the Military Council of the Russian Empire, author of the work "History of the Patriotic War of 1812" in 3 volumes - SPb .: Type. trading house S. Strugovshchik, G. Pokhitonov, N. Vodov and Co., 1859-1860. French - 130 thousand, Russians - 120 thousand.Year 1859. 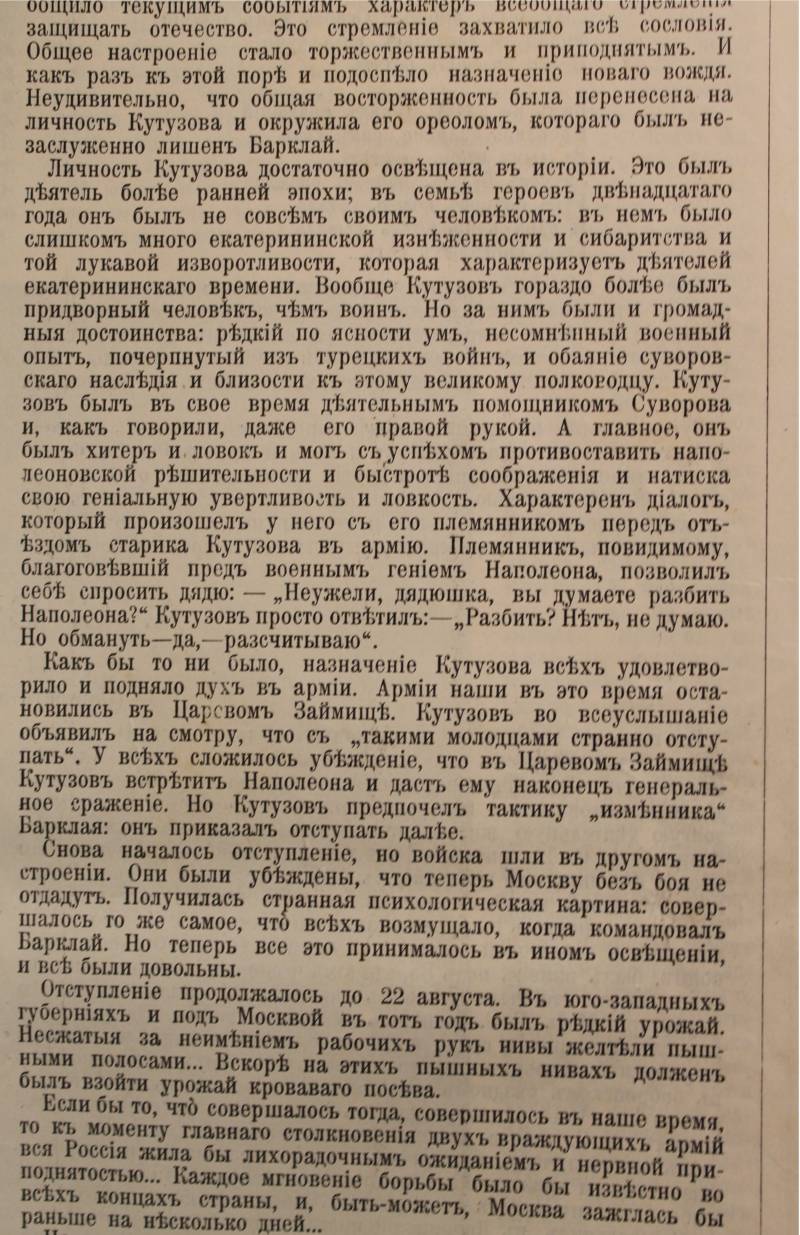 We read "Niva" further ...
9. Nikolai Alekseevich Troitsky (1931, Saratov), ​​Soviet and Russian historian, an expert on the problems of the revolutionary movement in the 1812th century and the history of the Patriotic War of 1971. Doctor of Historical Sciences (1812), professor, author of several works on the history of the war of 134. His figures are as follows: the French - 154,8 thousand, the Russians - 1988 thousand. Year - XNUMX.

12. Viktor Mikhailovich Bezotosny (1954), Soviet and Russian historian, specialist in the field of military history of Russia, the history of the Napoleonic wars and the history of the Cossacks. Doctor of Historical Sciences. Head of the exposition department of the State Historical Museum. Defended dissertation: "French and Russian intelligence and plans of the parties in 1812" (dissertation of the candidate of historical sciences: 07.00.02), M., 1987, and "Russia in the Napoleonic wars of 1805-1815." (dissertation of Doctor of Historical Sciences: 07.00.02), M., 2013. Its figures: the French - 135 thousand, the Russians - 150 thousand. Year 2004. 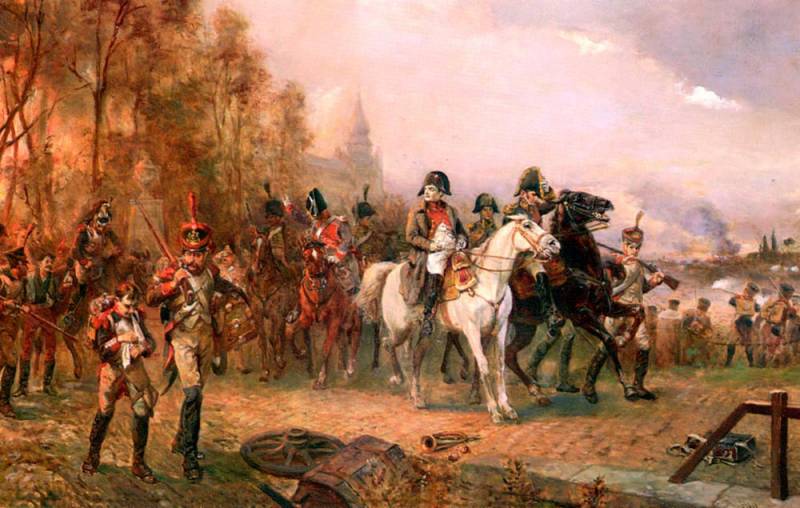 Robert Alexander Hillingford (1828-1904). "Napoleon at Borodino" (private collection)
So, all the numbers are different, although the sources for all are approximately the same.

For example, General Tol reports on the number of Russian troops in his memoirs: 95 thousand regular troops, 7 thousand Cossacks and 10 thousand militia warriors and "with this army 640 artillery pieces." 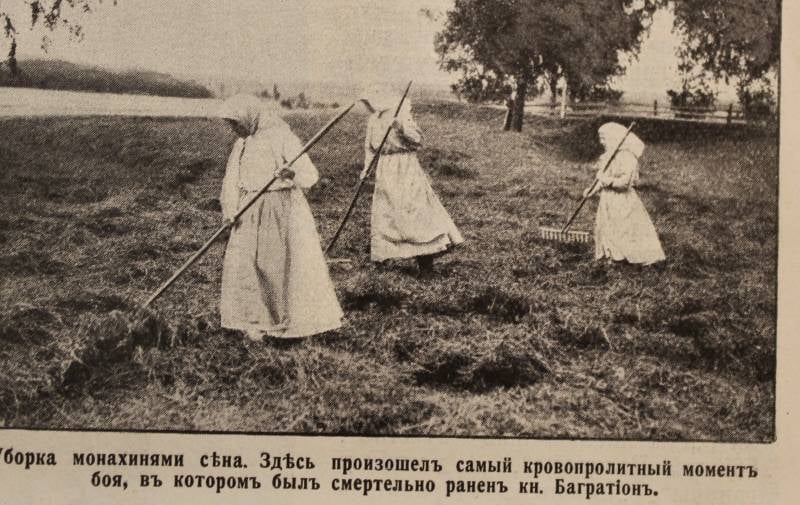 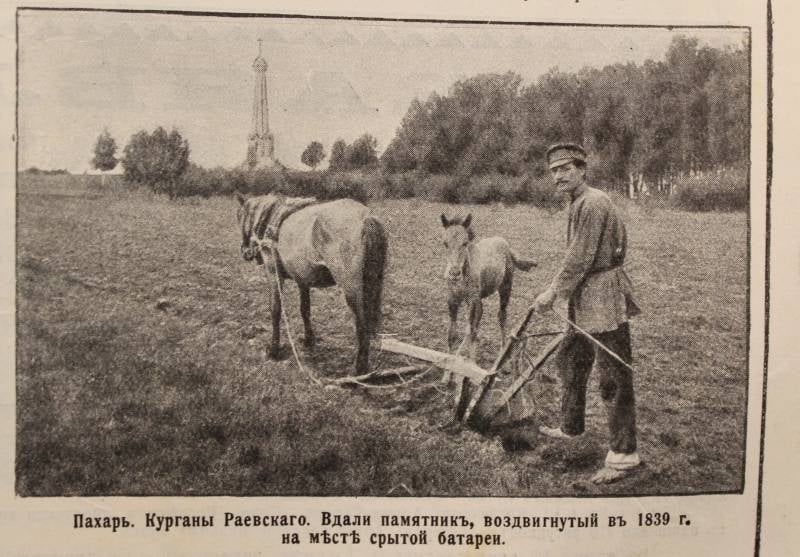 Two very interesting photos from the battle scene. They clearly show why the revolution in Russia had to take place without fail. “It's in the yard” in 1912, and the peasant is plowing with a plow ... Such an economic “platform” of the state, well, simply did not work, it had to be changed. And along with the basis, of course, the superstructure had to change ...
The number of the French is known from the roll call held on August 21 (September 2) in Gzhatsk. According to her data, there were 133 815 combat ranks of the French (but there were also lagging soldiers, and their comrades responded for them in the hope that they would catch up with the army). But this did not include 1500 horsemen of General Pajol, who came later, and 3 thousand combat ranks who were at Napoleon's headquarters. Although it is unlikely that they took part in the battle at all ... 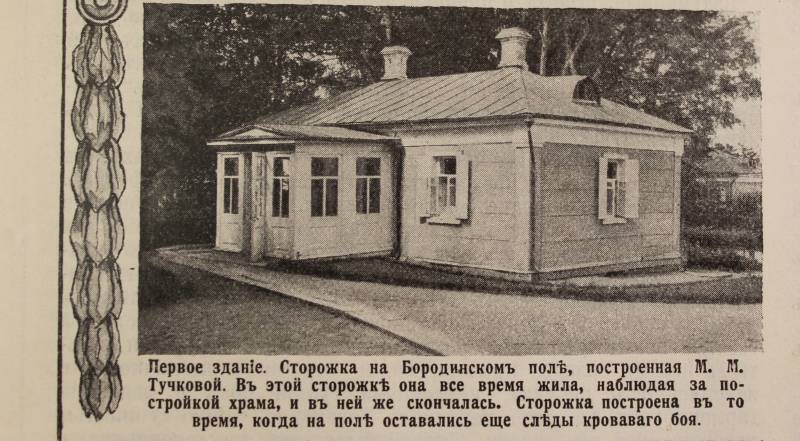 Another memorable photo from "Niva"
As for the French historiography of the Battle of Borodino, it would be most correct to start with Napoleon himself. In the 18th Bulletin of the Great Army of September 10, which was compiled with his undoubted participation, Napoleon presented the "Battle of the Moscow River" as a decisive victory over the Russian army. It was written there that by 8 o'clock in the morning the enemy was shot down from all his positions, tried to return them, but unsuccessfully; and that by two o'clock in the afternoon this battle was actually over. The same 18th bulletin of the Great Army says about 12-13 thousand killed, 5 thousand prisoners, 40 generals, wounded, killed or taken prisoner, and 60 guns captured by the French. But F. Segur, an officer who was directly at Napoleon's headquarters, reports the following about the trophies: prisoners from 700 to 800 people and about 20 guns. The losses of the Russians were said to be 40-50 thousand people, the losses of the French - 10 thousand. Approximately the same figures were given by Napoleon in a letter dated September 9 to the Austrian emperor Franz I. But the day before, in a letter to Empress Marie-Louise, for some reason he wrote about 30 thousand losses among the Russians, and about his own he wrote: "I had many killed and wounded." It is interesting that in all these three documents the strength of the Russian army was estimated by Napoleon at 120-130 thousand people, no more. But only five years passed, and in 1817 the same Napoleon began to assert something completely different: "With an 80-strong army, I rushed to the Russians, consisting of 250000, armed to the teeth, and defeated them ..." 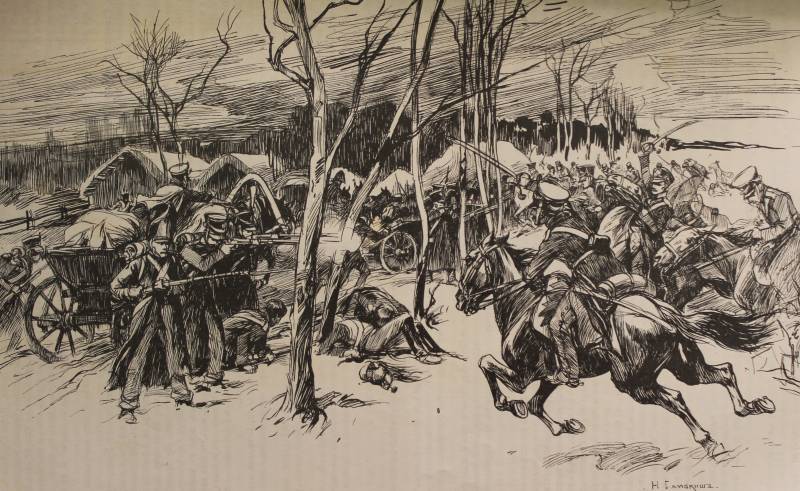 The battle between the Russians and the French. N. Samokish
So the expression "lying as an eyewitness" did not arise from scratch, it is clear. Although, on the other hand, there are many such eyewitnesses who had nothing to embellish, and in their memoirs they wrote down what is. For example, that very few trophies were taken by the French was evidenced by an important eyewitness - Napoleon's adjutant Armand Colencourt, who recorded that the emperor repeated many times that he could not understand how the redoubts and positions that were captured with such courage "gave we have only a small number of prisoners. " Many times he asked the officers who had arrived with reports where the prisoners were to be taken. He even sent to the appropriate points to make sure that no other prisoners had been taken. These successes without prisoners, without trophies did not satisfy him ...

"The enemy carried off the overwhelming majority of his wounded, and we got only those prisoners of whom I already spoke, 12 guns of the redoubt ... and three or four others taken during the first attacks."
But can we still find out some exact figures regarding the Battle of Borodino? Yes, we can, but more on that in the next article.