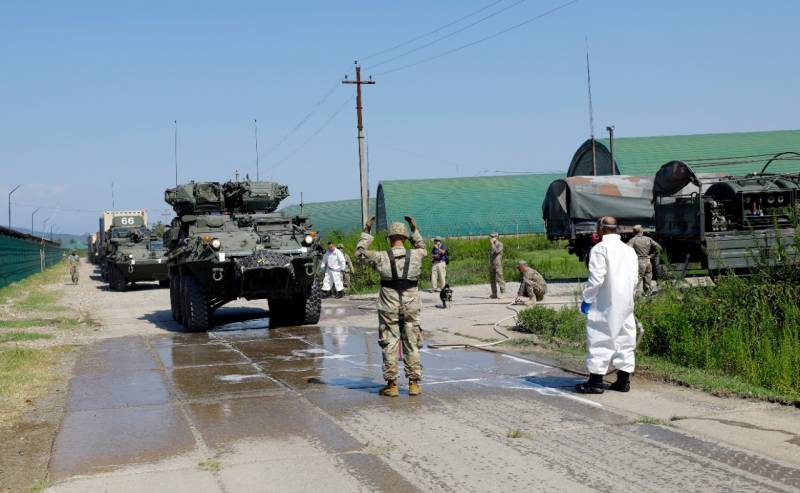 By the time of the opening of the international exercises Noble Partner 2020 ("Worthy Partner - 2020") aviation delivered personnel from the participating countries to Georgia. A convoy of military equipment from the United States arrived in Poti by sea from Virginia, calling at the Romanian port of Constanta. Delivery was carried out by the ship Ocean Freedom.


This is reported by the First Channel of Georgia.

The convoy of equipment under the flags of Georgia and the United States proceeded towards Vaziani, where the exercises were officially opened at the site of the 4th Mechanized Brigade.

This year, the exercise will end on September 18. In addition to the Georgian and American servicemen, the military from France, Great Britain and Poland will also take part in them. The maneuvers are carried out to improve the training and compatibility of the Georgian armed forces with the armies of the NATO countries. It is stated that by participating in the exercises, Tbilisi is making a feasible "contribution to maintaining a stable and secure environment in the Black Sea region."

As the head of the Georgian government Giorgi Gakharia said at the opening ceremony, this small Caucasian country intends to achieve Euro-Atlantic integration in this way. In addition, according to Gakharia, the maneuvers should contribute to solving problems on a global scale:

We all understand very well that the knowledge that our soldiers will receive here should be used to establish global peace.

Ctrl Enter
Noticed oshЫbku Highlight text and press. Ctrl + Enter
We are
Summary of the week from voenkor Mag about events in the DNI and LC 21.04.18 - 27.04.18Summary of events in the DPR and LPR for 14.04.18 - 20.04.18 from the military commissar "Mag"
35 comments
Information
Dear reader, to leave comments on the publication, you must to register.