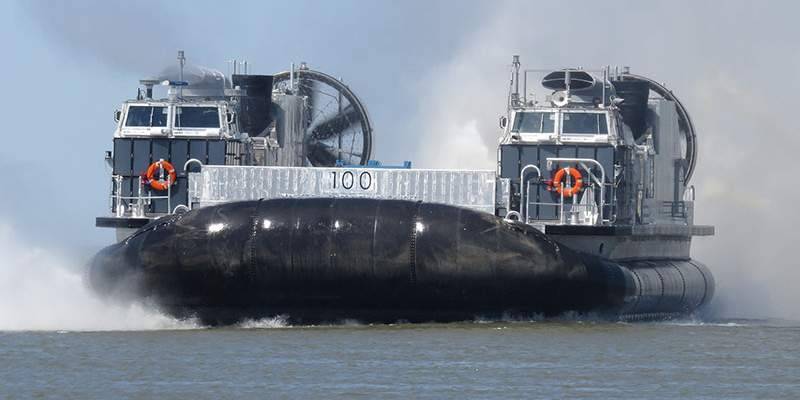 Since the mid-eighties, the Landing Craft Air Cushion (LCAC) is one of the main landing craft of the US Navy. By now, this technique is outdated and needs to be replaced. The new boat was created as part of the Ship-to-Shore Connector project and has already been delivered into series. The other day the fleet handed over another serial copy.

For the first time, proposals to replace the LCAC with a newer model appeared at the beginning of the 2003s. In 2005, a plan for the development of the Navy was issued, according to which the development of the future landing craft was to begin in 2010. In fact, it started only in XNUMX. According to the plans of that time, the production of new equipment was to begin in the second half of the tenth.

The 2010 program was originally designated LCAC Replacement Tactical Assault Connector or LCAC (X). The program was later named Ship-to-Shore Connector (SSC), and this designation is still used today. The first boat carries its own number LCAC 100, which is why the project is sometimes referred to as LCAC 100 class.

In 2010, three developers joined the program, incl. consortium led by Textron Marine & Land Systems. Together with Alcoa Defense and L-3 Communications, she developed her own version of the hovercraft, which the military considered the most successful. In July 2012, a $ 212 million contract was issued for the development of a technical design with the subsequent construction of an experimental LCAC 100. An option was also provided for a series of eight pre-production boats. 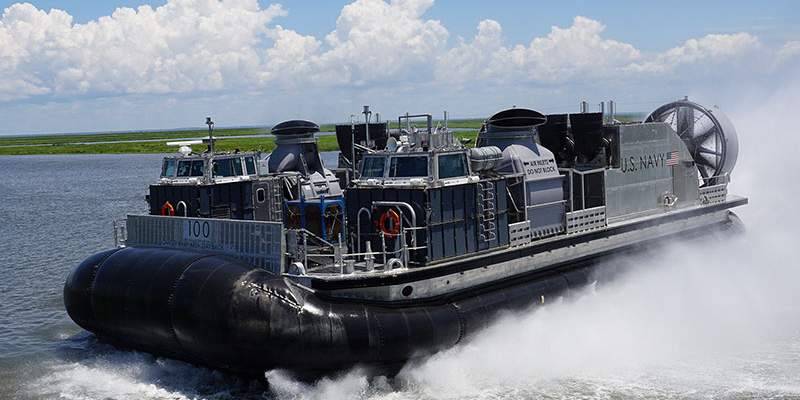 The tasks were completed on time, and in April 2015 a contract was signed for the construction of the first production batch of two SSC products. The cost of the boats is $ 84 million.The delivery to the customer was planned for the last quarter of 2019.

In 2019, the contractor completed and tested the first SSC. The events ended in mid-December, and in February 2020 the boat was handed over to the customer. Now the Navy plans to use it as an experimental and training platform.

The first SSC met its schedule, but the construction of the second went beyond it. It was handed over to the customer only at the end of August 2020. The construction timeline was negatively affected by the general problems of the project, as well as organizational difficulties due to an unexpected pandemic.

During the construction of the first two boats, Textron received a new order for the next batch. In April this year, the Navy announced a new order for 15 boats; their total cost will be $ 386 million. Reportedly, the plant in New Orleans has already laid down 12 boats, and they are at various stages of construction. The first ones will be delivered to the customer shortly. New contracts are expected and construction for the entire series will continue until mid-decade.

The task of the SSC project was to create a new landing boat, superior in its main characteristics to the existing serial LCAC. It was necessary to increase the carrying capacity and the area for the payload, as well as to improve the running and operational characteristics. To perform such tasks, the new SSC was performed on the basis of the existing LCAC, but with a serious redesign of the design and the introduction of new solutions. 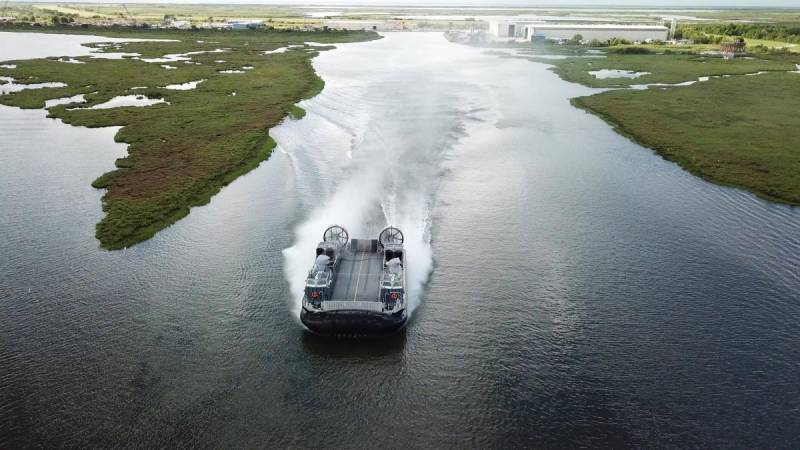 The SSC is a hovercraft with a flat deck surrounded by superstructures. Aluminum alloys and composite materials are widely used in the design, which made it possible to reduce weight without other losses. A new version of the rubber air cushion guard is used, increasing maneuverability and reducing the likelihood of damage. By improving the design, the assigned resource has been increased to 30 years.

The side superstructures of the boat accommodate four Rolls-Royce MT7 gas turbine engines with a capacity of 6160 hp each. With their help, air is pumped under the bottom and the propulsion propellers are driven. With the help of such a power plant, the SSC boat can reach speeds of up to 50 knots on the water. Access to an unprepared coastline is provided without major obstacles.

A deck of 67x24 feet (20x7,3 m) is provided to accommodate the payload. Normal lifting capacity is 70 tons. In comparison, the LCAC is only capable of carrying 54 tons or 68 tons per overload. On the bow and stern of the deck there are folding ramps for loading and unloading equipment. As in the case of the LCAC, vehicles can be unloaded on their own. 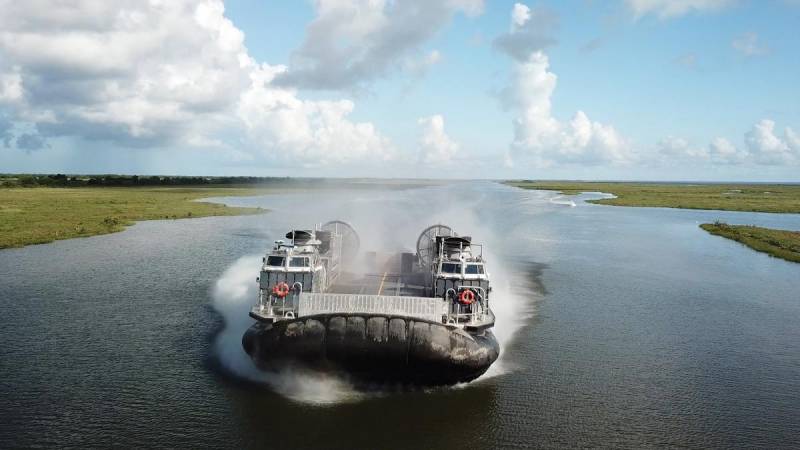 The crew includes four people. The commander and his assistant, the flight engineer and the loading master are working in the two wheelhouses in the bow. All units are controlled from ergonomic workplaces using fly-by-wire systems.

The armament of the boats has not yet been reported. Perhaps combat units will be able to carry machine guns of different types or other light weapon to support the landing force. In this case, the boats will do without artillery or missiles.

The US Navy now has 74 LCAC hovercraft. They are divided among several divisions and serve on different bases. If necessary, they are able to work independently or together with large landing ships.

In 2015, plans were approved to build new equipment and replace obsolete boats. It is proposed to build 73 new SSCs, not counting the head prototype. The total cost of construction will exceed $ 4 billion - approx. 55 million per unit. There are already orders for two dozen boats. 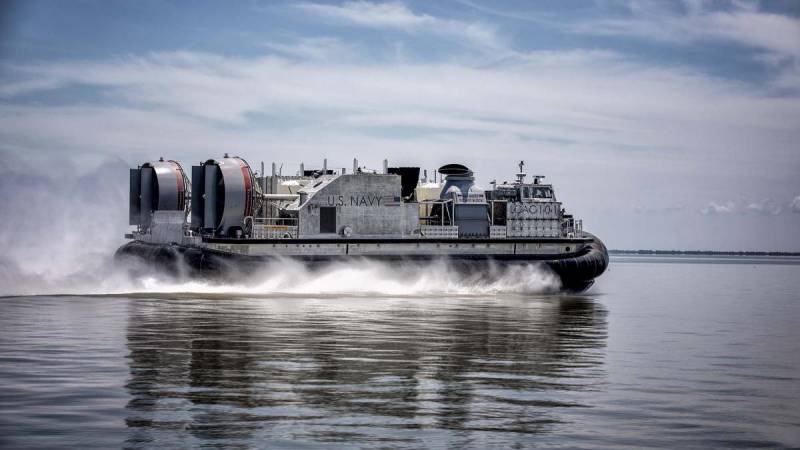 Boat LCAC 101 on trials
Textron is ready to build a large series of boats and annually deliver 12 units to the customer. Thus, the release of the entire planned series will take no more than 6-7 years. Events in recent months have hit production hard in the earliest stages, but the contractor remains optimistic, prepares to continue fulfilling orders and awaits new contracts.

No later than 2025-27 The US Navy will be able to carry out a complete and equivalent replacement of the LCAC landing craft fleet. 74 old products will give way to 73 (or 74) new boats. Apparently, the units of such boats will be able to maintain the current staffing and number of equipment. Operation of promising boats will continue until 2050-60.

Thanks to the production of new boats, the quantitative indicators of the amphibious forces of the US Navy will not change, but the grouping of boats will change qualitatively. Boats will be able to carry more cargo with increased speed and lower operating costs. With their help, the problem of landing troops will be solved for the next several decades.

Thus, one of the most important projects in the context of the modernization of the Navy and the ILC has been successfully brought to the stage of mass production and development of equipment in the army. In the coming years, these successes will be developed and will seriously change the capabilities of the amphibious forces, without requiring a serious restructuring of the staff structure or methods of combat use.