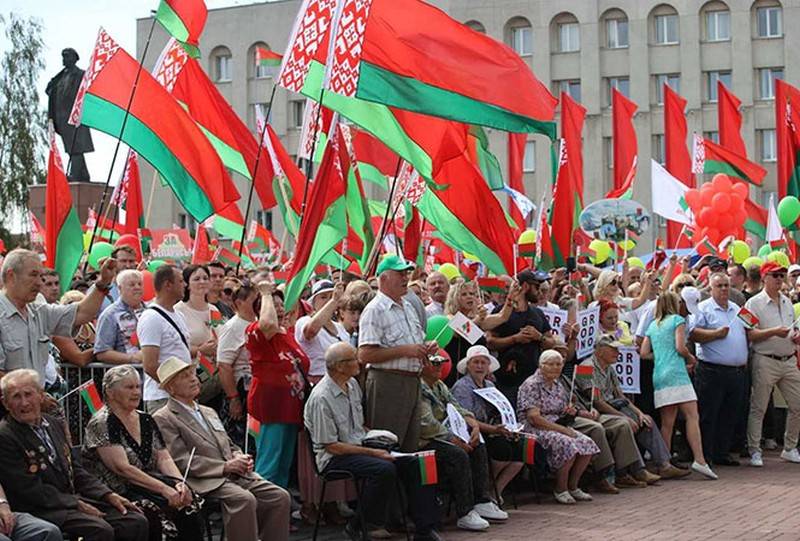 The turbulent events of early August in Belarus are turning into a calm phase, the blitzkrieg attempt with the coup failed, it also failed to raise workers to strike, and peaceful "walks", even if massive ones, can no longer shake the stability of the government. The Belarusian crisis is not over yet, but according to the past stages it is already possible to draw conclusions about what results have been achieved and in what direction the situation can develop further.

A premeditated attempt to overthrow Lukashenko and tear Belarus away from Russia using the discontent of a significant part of society with the methods of his rule and channeling discontent in the right direction for the West ran into the president's firm determination to stand to the end and ruined these plans. Several factors contributed to this.

The lack of unity of the collective West and its split due to the lack of common interests of the countries of "old" and "new" Europe did not allow it to strike a serious blow at its geopolitical enemy - Russia. The most active supporters of the putsch and its main executors, Poland and Lithuania, with the participation of the intelligence services of other countries, with their inherent ambition and impudence, tried to carry it out according to classical schemes (NGOs, work in social networks, training of militants, perversion of information, pressure from Western countries), without much bothering themselves a serious analysis of the situation in the country and the ability of the ruling regime to resist the putsch.

In addition, the ambitious plans to strengthen Poland, which had become the main conductor of US policy in Europe, and Lithuania, playing along with it, did not suit Germany and France, which was standing behind it, who were striving to retain the role of European leaders. They did not need the strengthening of a competitor. They took steps to limit their ability to attract the apparatus and mechanisms of the European Union to their side in order to unleash confrontation and a real civil war in Belarus, following the example of Ukraine. The United States, busy with internal squabbles, did not show much interest in these events either. Everything was limited to statements about the undemocratic nature of the elections and calls for a dialogue between the authorities and the opposition.

Russia put an end to the uncertainty after the elections, recognizing the legitimacy of the election of Lukashenka and unequivocally warning about non-interference of third countries in the internal Belarusian conflict. In the event of such interference, Russia declared its readiness to provide the necessary support to Belarus within the framework of existing interstate treaties, which quickly cooled the hot Polish and Lithuanian heads.

After the announced official position of Russia, it became clear who would decide the future of Belarus and its president. The leaders of Western countries, the European Union and the OSCE, to whose calls Lukashenko did not react in any way, began to call Putin and coordinate their actions with him. All this led to the removal of tension and the search for compromise ways out of the current crisis.

The battle for Belarus turns into a political plane

At the same time, the attempt of the West to weaken Russia has not disappeared anywhere: without taking Belarus "in impulse" and spending considerable efforts and resources to overthrow Lukashenka, they will not stop and will look for other ways to tear off Belarus. After making sure that the tactics of rallies do not bring success, they use other mechanisms to achieve the goal, one of which is the transfer of the struggle to the political space.

Nobody doubts that the political system built by Lukashenka has outlived its usefulness and needs to be replaced. Belarus can no longer remain the same as it was before August 9. The President of Russia is pushing everyone, including Lukashenko, to start discussing the issue of the future of Belarus and stresses that the Belarusian society, through dialogue, must decide for itself how it will live further. Lukashenka has already announced the start of constitutional reform and possible early elections. In the near future, a meeting will be held in Moscow between the two presidents, where these issues will be considered.

In resolving this crisis, the West and Russia pursue different goals, the West seeks to tear off Belarus, and Russia - to keep it in the sphere of its interests. In this regard, the Russian leadership, which supports Lukashenka, proposes to conduct an open dialogue with representatives of political and public organizations of the Belarusian society, and the West - with the demonstrating opposition, which no one authorized to do so. She has appointed herself to this role, and on her behalf an unselected self-appointed coordinating council acts for the transfer of power. Attempts by Poland and Lithuania to represent housewife Tikhanovskaya as the leader of the opposition are not taken seriously by anyone. She is a consumable and will have to leave the political scene in the near future; everyone will quickly forget about her.

The West needs a legitimate representation in the Belarusian society. Concrete steps have already been taken in this direction, behind which the trail of Germany is visible. Tikhanovskaya, unexpectedly from her own entourage, has a more presentable rival - the "flutist" Maria Kolesnikova, who is still the same impostor who has declared herself the leader of the opposition. The next stage was her statement and the creation of the political party "Together" together with the ex-presidential candidate Babariko sitting in the Minsk jail. To assess what is happening, you need to understand who Kolesnikova and Babariko are.

Kolesnikova is a citizen of Belarus, who has a residence permit in Germany and lives in Stuttgart almost all the time. She is a public figure in the field of musical culture, working for a number of NGOs registered in Germany. In 2017, she began to show interest in politics and joined the team of the Belarusian banker Babariko, and when he became a presidential candidate, she entered his headquarters.

Babariko is also an interesting personality, a Belarusian banker who headed Belarusgazbank, owned by Gazprom. According to his views, he is an ardent supporter of the integration of Belarus with the West, defending the privatization of the Belarusian industry, a man of nationalist convictions, who has been in close contact with pro-Western oppositionists, including human rights activist Aleksievich.

He was nominated as a presidential candidate with the tacit support of Gazprom and, as it were, pro-Russian positions. He did not manage to launch the election campaign, as he was accused of tax evasion and was arrested. Gazprom did not advertise its support for Babariko, since it seriously disagreed with the official line of the Russian leadership to support Lukashenka. Gazprom's minions Balkunets and Suzdaltsev on Russian TV channels and social networks have been and are working to discredit Lukashenko, demanding his removal from power, starting negotiations with the opposition and hinting that there is a much more acceptable “honest pro-Russian” banker in his chair.

All this suggests that Kolesnikova and Babariko are very convenient candidates for Germany as leaders of the future Belarusian opposition. Inadequate Poland with its Belarusian marginalized will continue to be pushed aside from participation in serious games, the stage of “street democracy” ends and the struggle begins on the official political field, and this requires completely different legitimate political forces and leaders.

The image of the “pro-Russian” politician Babariko, who, moreover, suffered “for the truth in Lukashenka's dungeons”, gives him a head start in future political battles in Belarus. Kolesnikova also changed her militant rhetoric, opposes conflicts with law enforcement officers, convinces everyone that the peacefulness and civilization of Belarusians is the fist of protests, speaks of possible close economic ties with Russia and the need to listen to different strata of Belarusian society.

Germany correctly calculated that Poland's attempts to subjugate Belarus by means of a coup would meet with stiff resistance from Russia, it is much easier and safer to seek a compromise with it when determining the future of Belarus. In the context of the outlined process of preparation for the transformation of the political system of Belarus, the advantage will be given to legitimate parties and public associations. The Belarusian opposition, which is being prepared by Germany, is not the street, but the sane Belarusian opposition is changing its tactics, preparing for a future political confrontation and looking for its place in the new Belarusian alignments.

In parallel, Germany is looking for ways to put pressure on Russia. And somehow Navalny was "poisoned" in time. He quickly ended up in the German clinic "Charite", where he was diagnosed with no less than poisoning by "Novichok", and a new "case of the Skripals" is already being launched. This clinic, by the way, in 2004 gave a conclusion about the dioxin poisoning of Yushchenko, which was never confirmed later. The battle for Belarus is entering a new phase, and it is not the Poles who undertake this, but serious structures with serious intentions, and this must be reckoned with.

Russia, acting in stages, with the help of Lukashenko, achieved the extinguishment of the active phase of the confrontation, thwarted attempts by the West to intervene in this process, did not allow the formation of a united anti-Belarusian European front and persuaded Lukashenko to start reforming the political system he had built. Now it is necessary to determine the contours of the future of Belarus, with its leadership and to work out the tactics and strategy of protecting Belarus from being absorbed by the West. For this, apparently, Lukashenka was invited to Moscow.

Thus, preparations have begun for a new stage in the political struggle for Belarus, the centers of influence are preparing a platform and forces to include it in their sphere of influence. After the meeting between Putin and Lukashenko, the tactics of actions on reforming the political system and early parliamentary and presidential elections will most likely be announced. The fate of Lukashenka will also become clear: he will remain in some role in the new power structure or will retire on a political retirement. 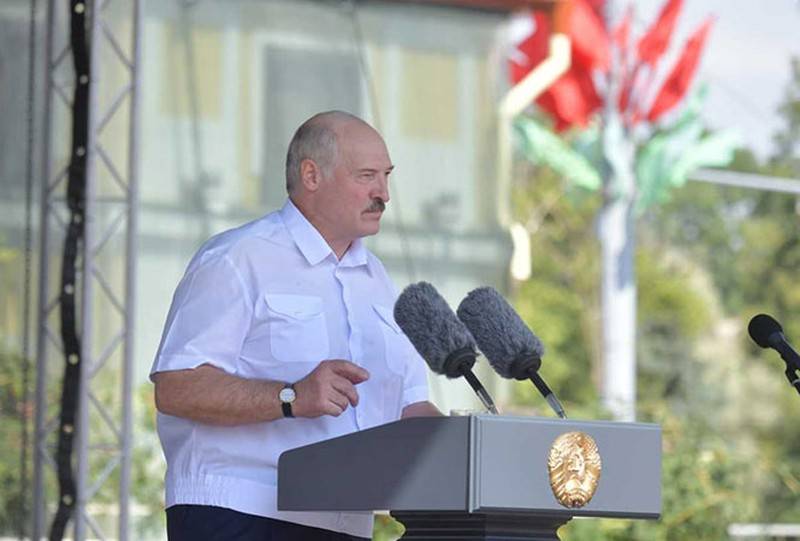