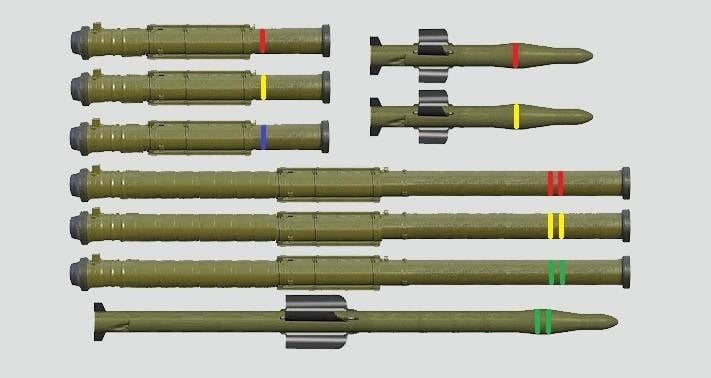 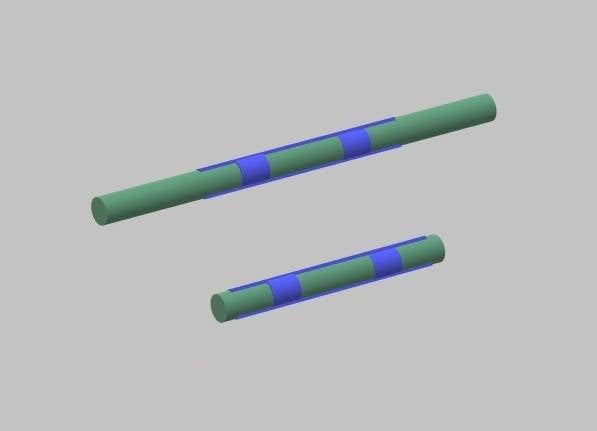 In this material, we will consider what unified ammunition can be created for a missile tank in order to ensure its multifunctionality and which should be used as part of promising SPTRKs, military air defense systems, combat helicopters, UAVs and other carriers. Consider what warheads (warheads) and guidance / control systems can be used in them.

For each proposed standardized munition, the tables contain a conditional rating that characterizes the importance of developing the specified munition. 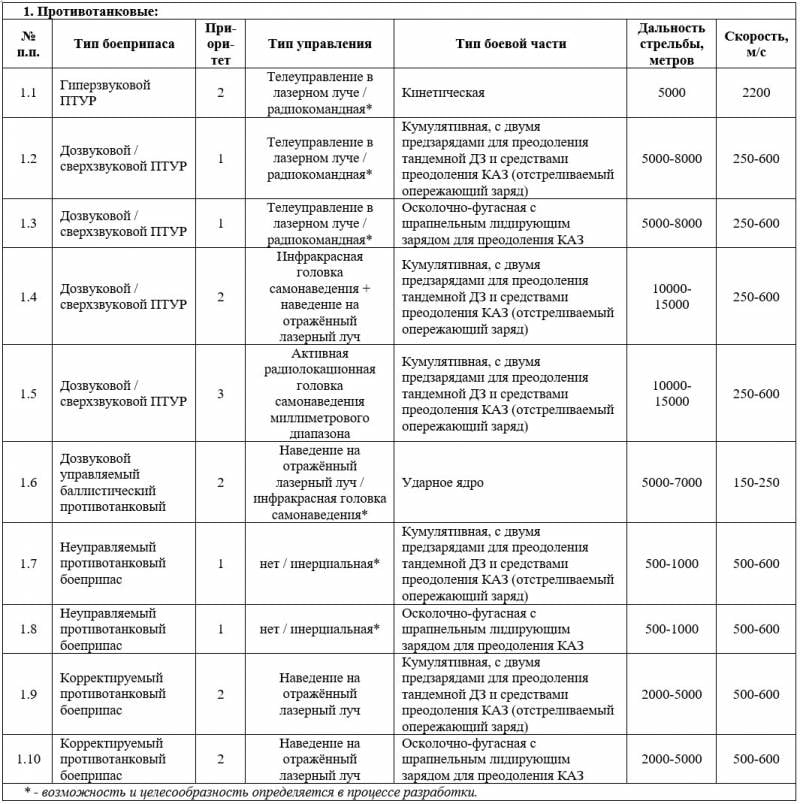 Nomenclature of anti-tank ammunition
The most advanced anti-tank ammunition for a missile tank should be a hypersonic ATGM, the possibility of creating which is discussed in the article "Prospects for the development of ATGM: hypersound or homing?", and which can potentially be created on the basis of the MERA hypersonic meteorological missile.

Meteorological missile MERA
Subsonic / supersonic ATGMs with remote control in a laser beam, a cumulative or high-explosive warhead and means of overcoming active defense systems (KAZ) can presumably be developed on the basis of the existing ATGM Kornet, Chrysanthemum, Ataka-D. 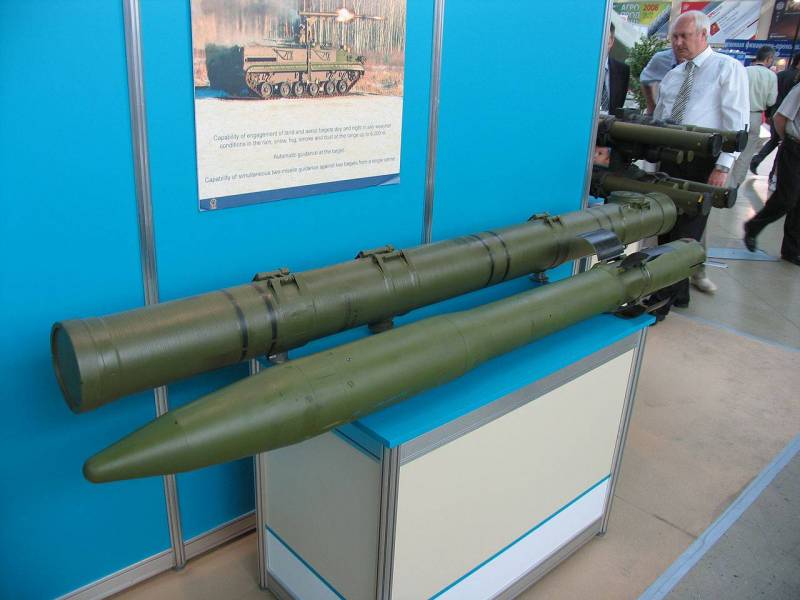 ATGM "Chrysanthemum" in TPK and without it
The dimensions of the unified anti-tank missile systems will make it possible to place a powerful warhead in them. For example, a shaped charge warhead can include a main charge with a shaped charge funnel diameter of the order of 160 mm and two leading shaped charges to overcome tandem dynamic protection.

The high-explosive warhead of the anti-tank ammunition can presumably contain 20-50 kg of explosive, the explosion of which will ensure the destruction of the tank without breaking through the armor: the tracks will be torn off, the gun barrel will be damaged, the reconnaissance and guidance equipment, all external modules will be destroyed, explosive reactive armor will detonate.

The table shows two options for means of overcoming active protection complexes (KAZ): a fired lead charge and a shrapnel lead charge. In the first case, it is assumed the use of a small-sized ammunition placed on a rocket and fired off before the main charge approaches the target. Small-sized ammunition can be intended both for the physical destruction of the KAZ elements and for jamming the KAZ guidance systems. The leading shrapnel charge can work in a similar way, destroying the elements of the KAZ guidance system or overloading it with false targets. The optimal means of overcoming the KAZ should be determined at the development stage. 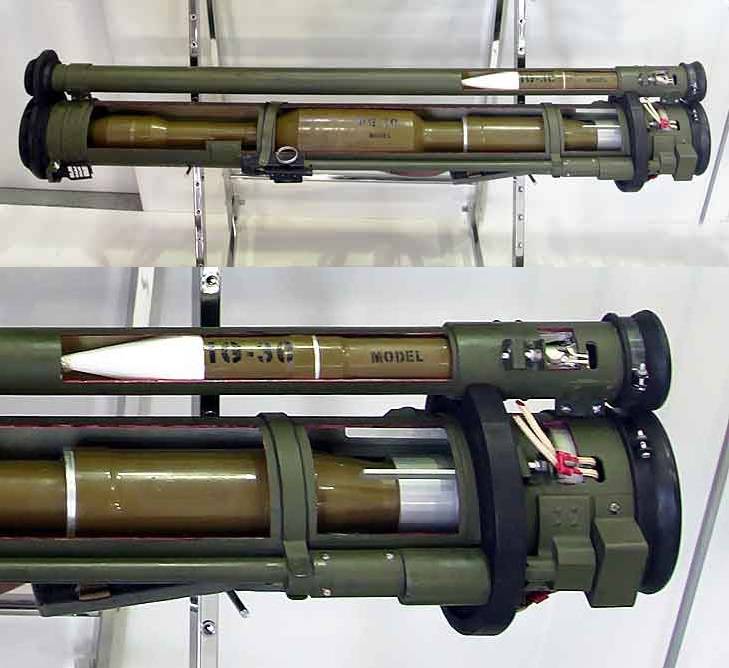 Small-sized ammunition for overcoming the KAZ as part of the RPG-30 "Hook" hand-held anti-tank grenade launcher
Subsonic / supersonic ATGMs with an infrared homing head and aiming at a reflected laser beam or an active radar homing head (ARLGSN) can be created on the basis of promising Hermes ATGMs, if the development of such seeker is underway. 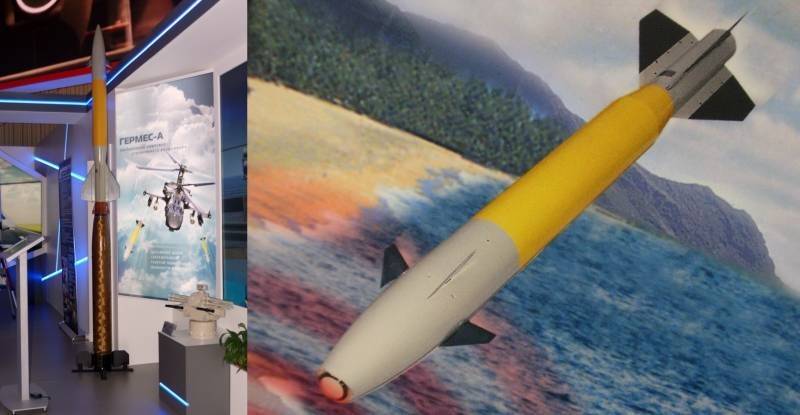 Layout and image of the first stage ATGM "Hermes"
Also, as a "donor" of the GOS, a promising "product 305" can be considered, presumably equipped with a multispectral optical-electronic GOS using semi-active laser and optical guidance with daytime and infrared channels of medium (3-5 μm) and long-wave (8-13) μm ranges of wavelengths.

The creation of an ARLGSN for an ATGM is in question, since it is still unknown about work in this direction in the Russian Federation. There is a high probability that the importance of optical and thermal homing heads will significantly decrease due to the proliferation of defensive laser systems... By the way, in the American ATGM JAGM, a multi-mode seeker is installed, which combines the capabilities of radar, infrared and laser homing. 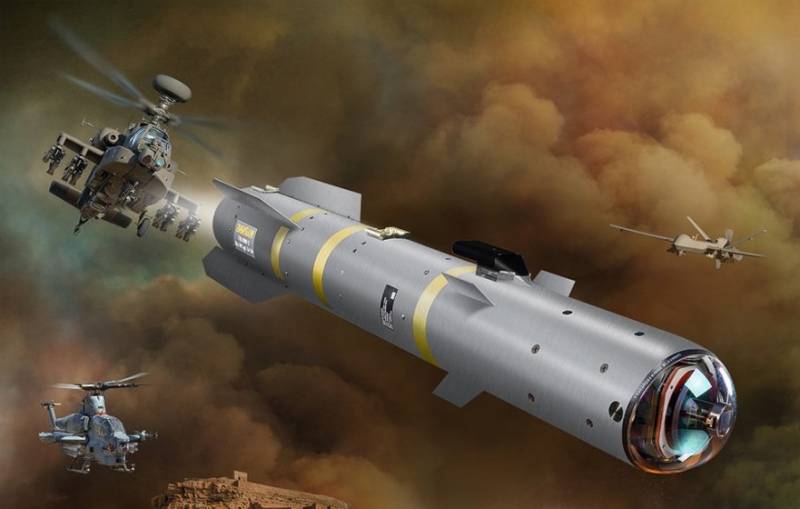 The Russian Armed Forces need an analogue of the multi-mode seeker mounted on the JAGM ATGM
The subsonic guided ballistic anti-tank ammunition can be developed on the basis of the technology of the 120 mm "Gran" guided mine equipped with a laser homing head. An attack core can be used as a warhead of a guided ballistic anti-tank ammunition. In principle, a high-explosive warhead can also hit a tank in the upper projection, but there is a risk of an increase in the effectiveness of KAZ, potentially capable of shooting down low-speed projectiles, including those moving along a ballistic trajectory. 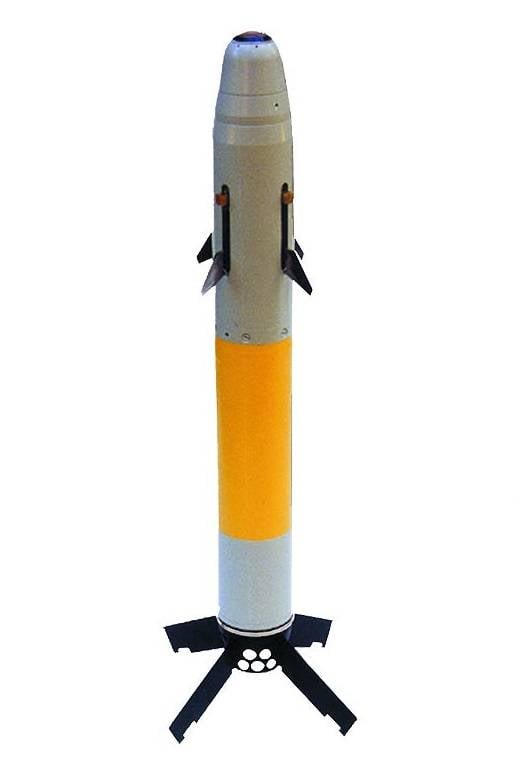 Guided mine "Gran" with laser homing

Warhead type "shock core"
Unguided anti-tank ammunition is intended primarily for a missile tank. Their cost should be comparable to or lower than that of tank shells with remote detonation on the trajectory or armor-piercing feathered subcaliber shells (BOPS).

As a basis for development, unmanaged aviation missiles (NAR). Currently, the NAR can hit targets at a distance of up to 5000 meters, but these are, rather, areal targets. In our case, the firing range will be limited to a distance of about 500-1000 meters. Warheads in unguided anti-tank ammunition should be unified with those of ATGMs. 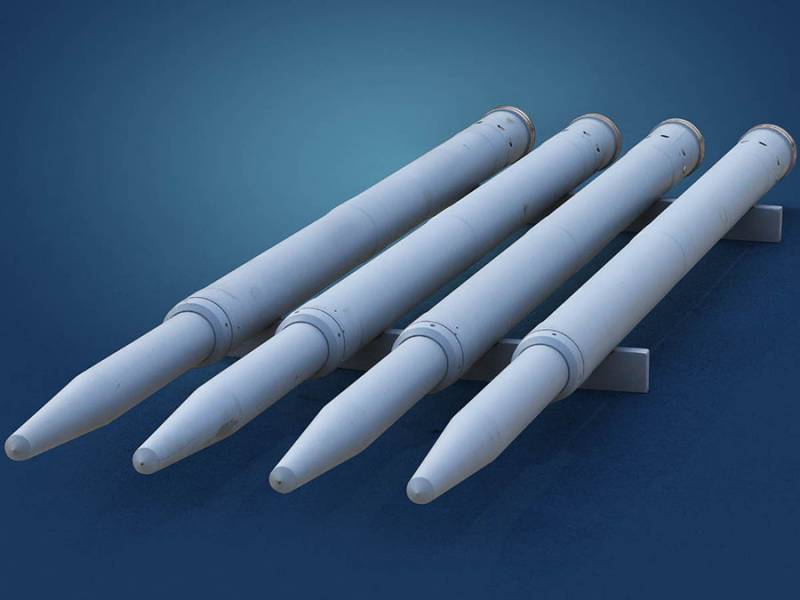 Unguided aircraft missile S-13-T
An important addition to the unified ammunition system can be corrected anti-tank ammunition, which can be developed on the basis of the NAR, equipped with correction units, including a laser homing head and pulse correction engines. In Russia, a project of corrected NAR "Threat" is being developed, within the framework of which NAR S-5Kor, S-8Kor and S-13Kor unified according to the GOS are to be created. 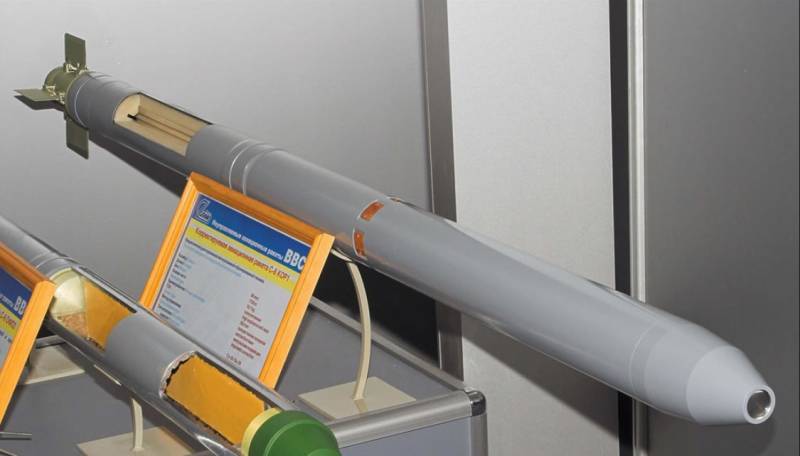 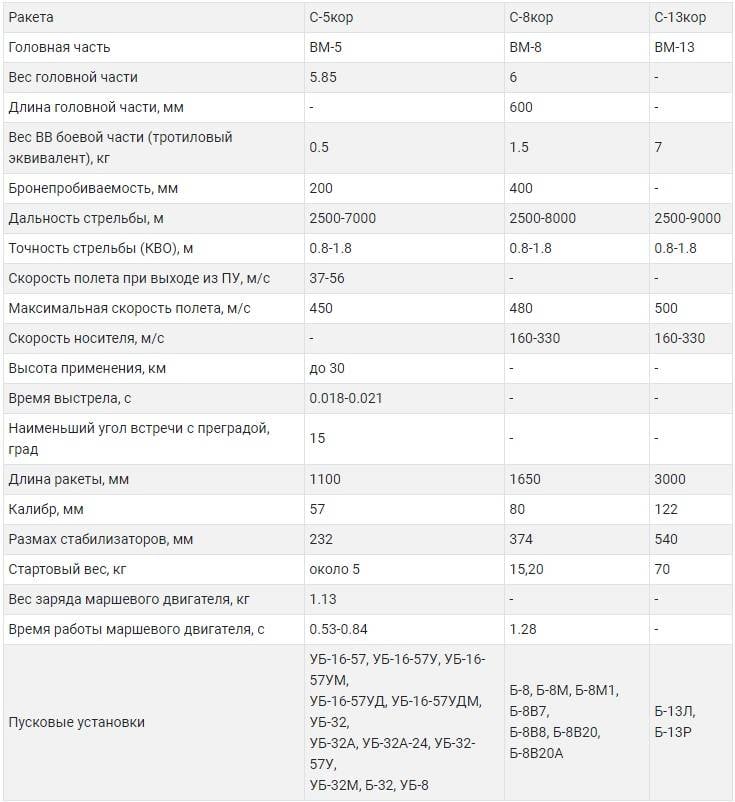 The performance characteristics of the NAR S-5Kor, S-8Kor and S-13Kor
The unified corrected anti-tank ammunition can hit targets at a range of about 5000 meters and in many cases can replace more expensive ATGMs. Their use is justified from all types of carriers under consideration. 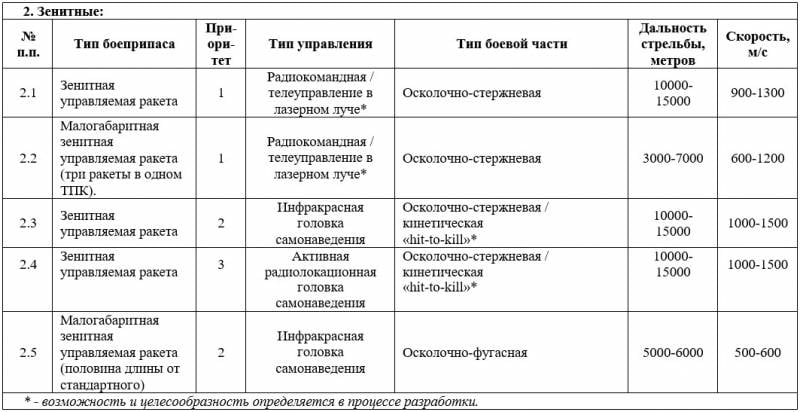 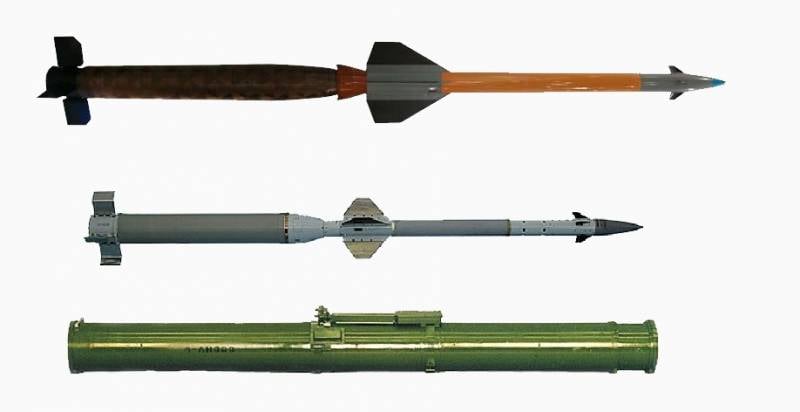 SAM ZRPK "Pantsir", SAM and transport and launch container (TPK) SAM "Sosna"
A short-range air-to-air missile RVV-MD / R-73 can be used as a basis for a unified missile defense system with IR seeker, the dimensions of which are only slightly larger than those assumed for unified ammunition.

RVV-MD / R-73
The small-sized anti-aircraft guided missile (half the length of the standard unified ammunition) is a unified version of the Verba portable anti-aircraft missile system (MANPADS), which, in turn, is a development of the Igla MANPADS. The diameter of the rocket, which is about 70 mm, makes it possible to place such rockets by three units in one container of reduced dimensions. 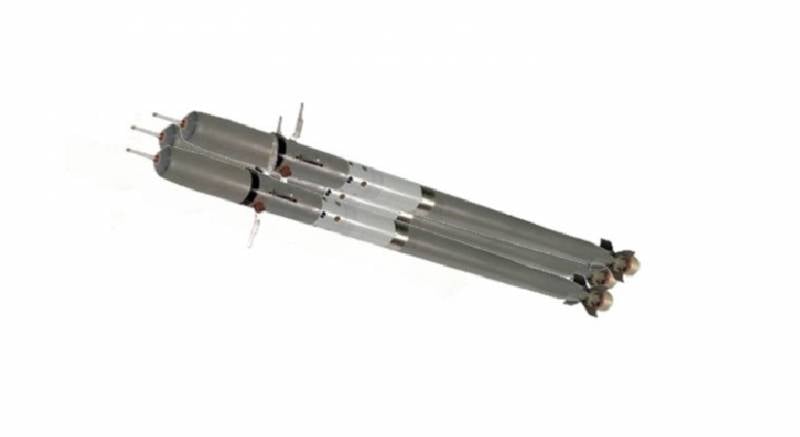 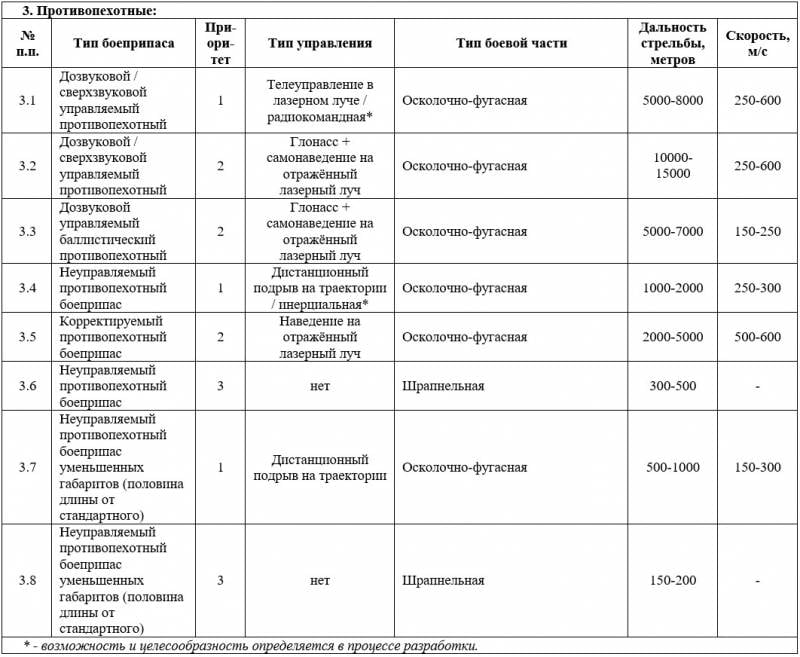 For guided and unguided munitions, remote detonation on the trajectory must be implemented, ensuring the defeat of manpower behind an obstacle.

Unlike anti-tank ammunition, designed to engage well-protected targets, containing means of overcoming reactive armor and KAZ, anti-personnel ammunition can be implemented in both full-size and half-length formats. Of course, such ammunition can be used not only to destroy manpower, but also to destroy lightly armored vehicles.

Also, the composition of the unified anti-personnel ammunition can include shrapnel ammunition designed to destroy openly located manpower and light armored vehicles in the immediate vicinity. 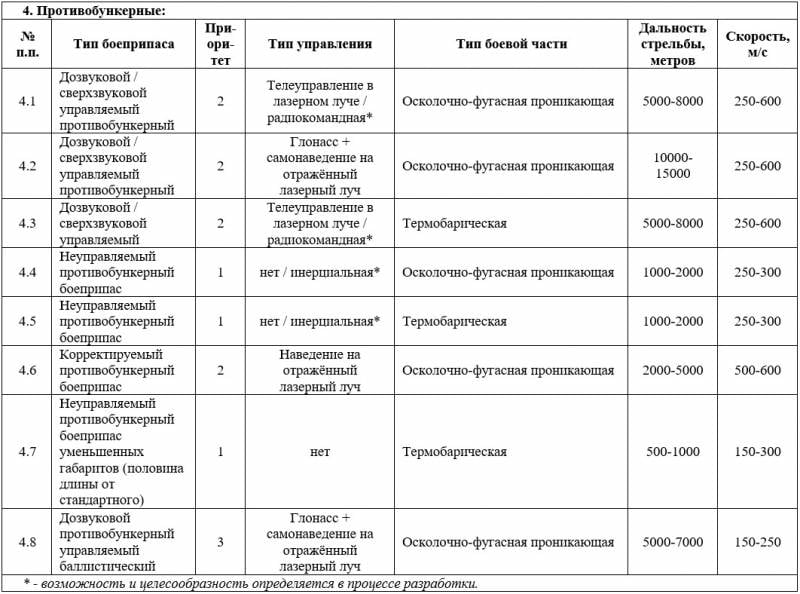 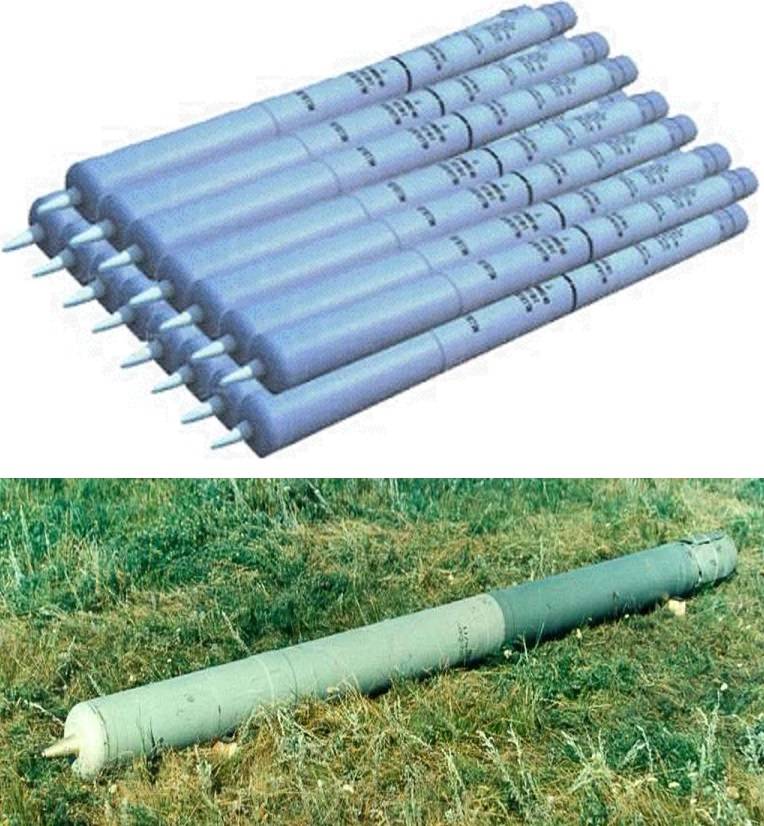 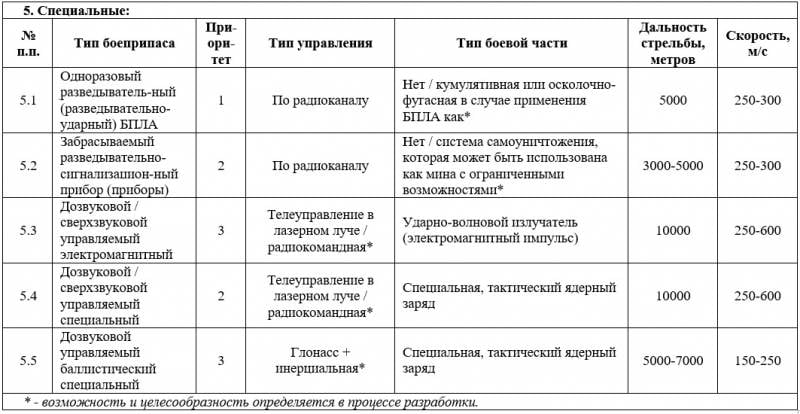 Nomenclature of special ammunition
Unified ammunition with a small-sized UAV is designed for reconnaissance. When equipped with a compact warhead, the UAV can also be used to directly engage targets, in fact, turning into a patrolling cruise missile. 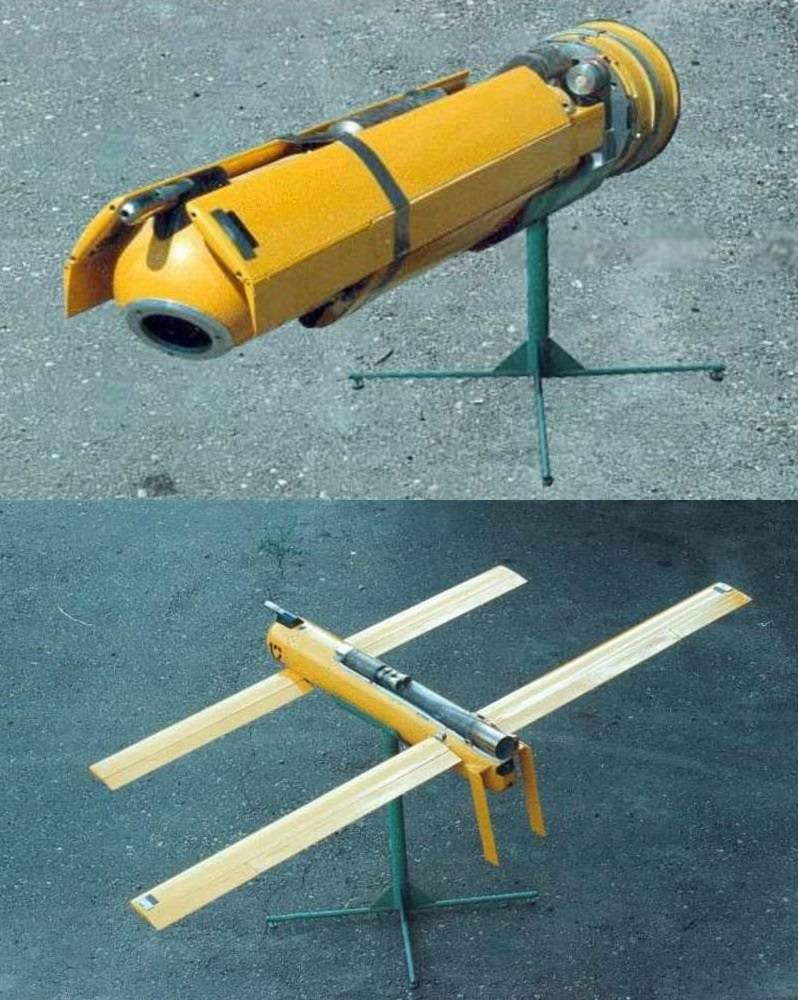 Small-sized UAV launched from the multiple launch rocket system (MLRS) "Smerch"
Another effective reconnaissance tool that can be developed in the format of unified ammunition can be reconnaissance and signaling devices (RSP). Existing and prospective RSPs include acoustic, seismic, magnetic and thermal sensors capable of detecting the movement of enemy armored vehicles and transmitting this information via a radio channel. The deployment of the RSP is carried out manually, by artillery or aviation. For unified ammunition, RSPs of various types can be created, capable of detecting ground equipment, low-flying aircraft, helicopters and UAVs. 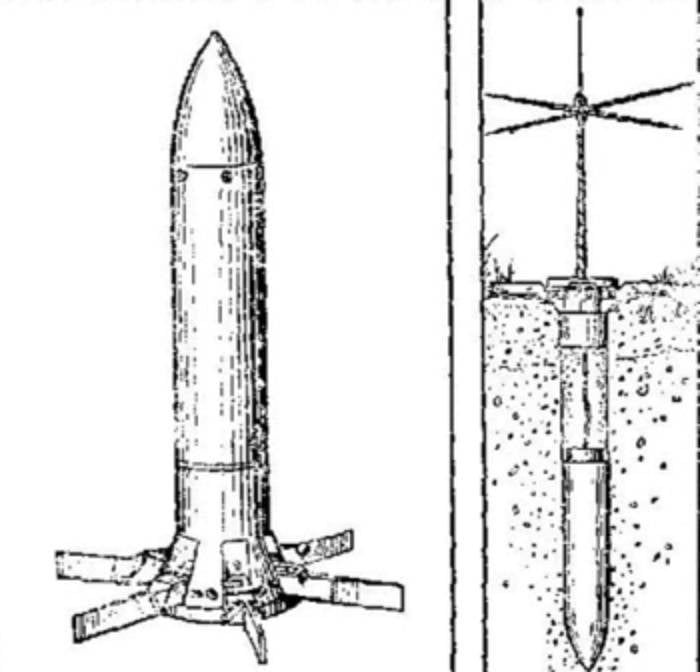 Image of the artillery version of the RSP
Unified ammunition with a shock-wave emitter - electromagnetic ammunition, designed to disable enemy electronics. These can be communications equipment, enemy radars and other electronics. For example, when attacking a group of tanks, several electromagnetic ammunition can disrupt the operation of all or part of the KAZ enemy tanks, simplifying their ATGM attack. Or destroy a swarm of small-sized UAVs, damaging their control and communication systems. 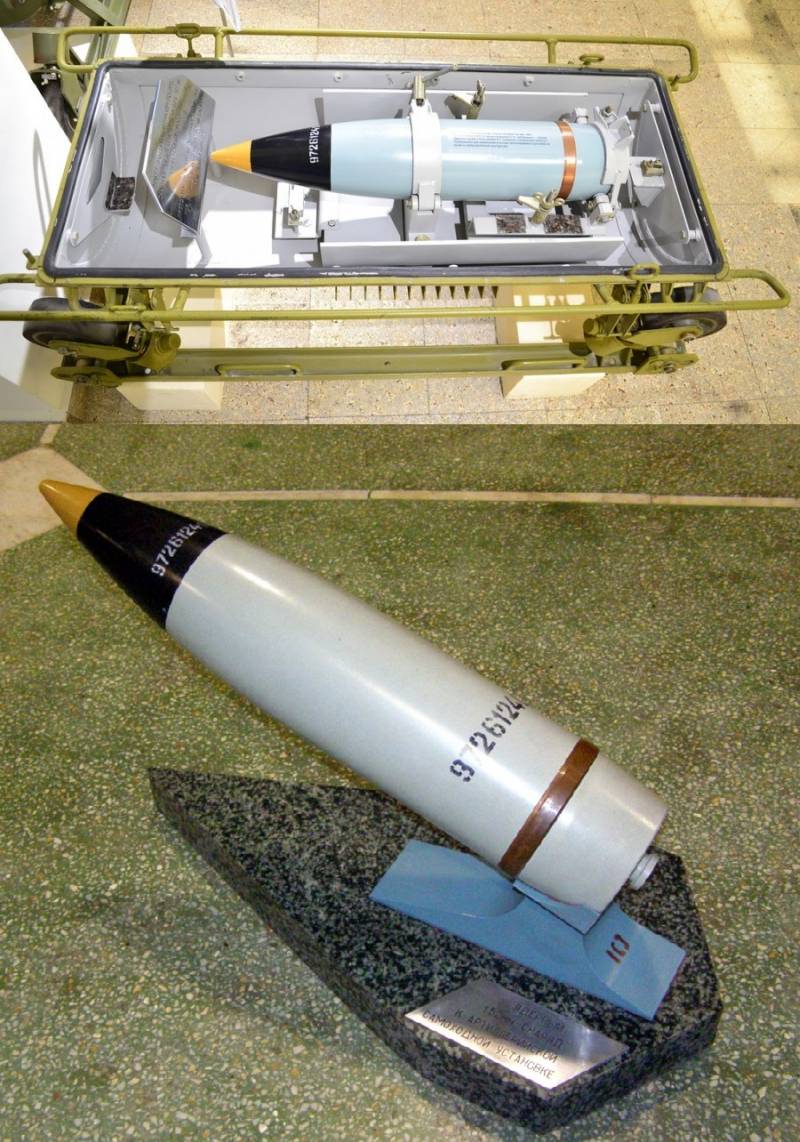 152-mm Soviet artillery shell 3BV3 with a capacity of 2,5 kilotons
For the enemy, the appearance of such a unified special ammunition turns into a terrible threat, in fact, any tank, SPTRK, helicopter or even a UAV or air defense system that can use unified ammunition of standard dimensions turns into weaponcapable of delivering a nuclear strike. If earlier for the enemy VIP targets were operational-tactical missile systems (OTRK) or artillery capable of inflicting a tactical nuclear strike, then in the case of a unified special ammunition the list of threats - carriers of tactical nuclear weapons increases by several orders of magnitude.

It is believed that the possibility of using special ammunition with a nuclear warhead was considered for the promising T-95 "Object 195" tank and the T-14 "Armata" tank in the version with a 152-mm cannon.

All of the above ammunition can and should be maximally unified in terms of combat units and guidance / control systems. Almost all of the supposed standardized ammunition has a prototype on the basis of which they can be created. No "space" technologies are required. 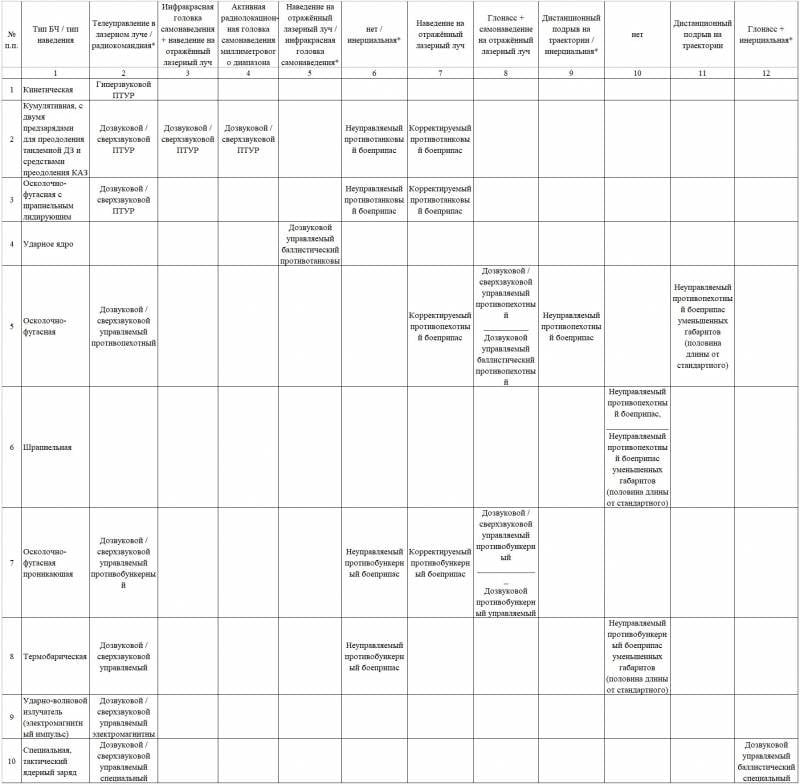 Summary table of unified ammunition for guidance / control systems and warheads (excluding missiles, they simply do not fit into the table)
Let's go back to the topic of the rocket tank. The range of standardized ammunition discussed in this material, which can be created and loaded into the ammunition of a missile tank, shows the highest versatility of this type of weapon.

We can say that many ammunition from the presented nomenclature is not needed by the tank, that the tank is a melee weapon. This is so, and weapons for close combat are present in the presented nomenclature. But if we are talking about the unification of missile weapons for ground forces, then why should a tank be deprived of a "long arm"? Moreover, the battlefield can be different, somewhere in the desert or in the mountains a distance of 10-15 km can be quite real (for example, when fighting from a dominant height).

We will dwell on the design of a missile tank in more detail in the next article.

Author:
Andrey Mitrofanov
Photos used:
btvt.info.ru, tvzvezda.ru, kbptula.ru, bastion-karpenko.ru
Articles from this series:
Fire support tanks, BMPT "Terminator" and the cycle of OODA John Boyd
Armored vehicles against infantry. Who is faster: a tank or infantry?
Increased situational awareness of armored combat vehicle crews
A helicopter against the tank. Standoff more than half a century long
Russian military helicopters and their weapons. History, present and future
Great extinction. Why certain types of weapons may disappear?
Prospects for the development of ATGM: hypersound or homing?
Armament of promising tanks: cannon or missiles?
Armament of promising tanks: cannon or missiles?
Unification of ammunition for self-propelled anti-tank systems, military air defense systems, combat helicopters and UAVs

Ctrl Enter
Noticed oshЫbku Highlight text and press. Ctrl + Enter
We are
Is the "old" well forgotten to become the "new"? Part-2. At the call of honor and dutyThe fire control devices of the Soviet and German tanks of the Second World War. Myths and Reality
Military Reviewin Yandex News
Military Reviewin Google News
73 comments
Information
Dear reader, to leave comments on the publication, you must sign in.