Sharp moments of the US Navy sonar reconnaissance at the gates of the Northern Sea Route. Deployment of the Seawolf-class ultra-low-noise submarine near the Barents Sea 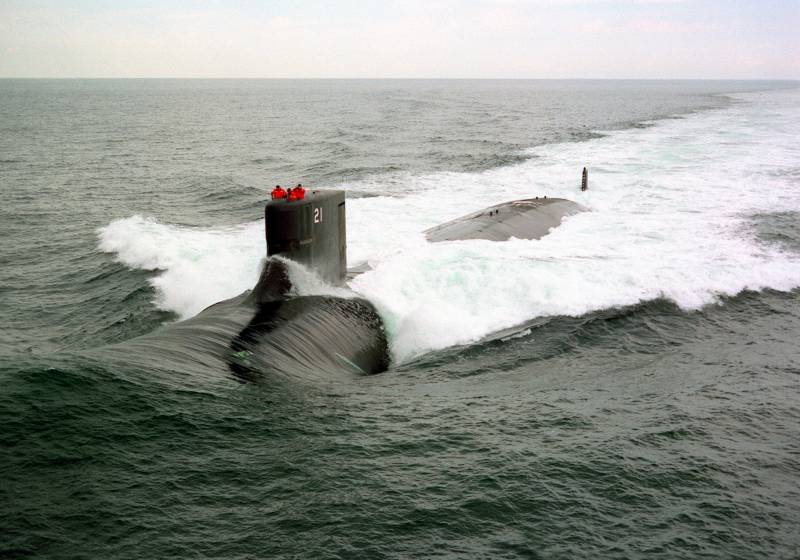 Information about the arrival and deployment in the northeastern part of the Norwegian Sea (150-250 km north of the littoral zone of the Norwegian province / Finnmark county) of one of the three ultra-low-noise multipurpose nuclear submarine cruisers of the Seawolf class of the US Navy was met with a number of alarmist comments and discussions on the part of numerous domestic observers, who came to the conclusion that even a single submarine of this class taking up combat duty in the above-mentioned region of the North Atlantic can call into question the preservation of both acoustic secrecy and the combat stability of the submarine component of the Northern fleet Russian Navy in the northwestern strategic direction.


Indeed, in the light of the outbreak and inexorably gaining momentum of the "Arctic race", which consists in the incessant attempts of the United States, Canada, Denmark, Great Britain and Norway to challenge the ownership of the Lomonosov and Mendeleev ranges, which are the extremities of the East Siberian platform, as well as in the permanent demonstration of anti-submarine and tactical aviation The US and British navies and air forces of the presence directly "at the western gates" of the Northern Sea Route, the appearance of such a secretive and technically perfect uninvited underwater visitor cannot but cause a certain amount of concern either among the specialists at the headquarters of the Northern Fleet of the Russian Navy, or among ordinary observers who are aware of the tactics. -technical parameters of this submarine.

Having low-noise water-jet propellers (by orders of magnitude reducing the hydrodynamic disturbance and acoustic noise from the cavitation effect of propeller blades), the size of a modern and highly efficient "anechoic" coating, as well as multi-tiered shock-absorbing platforms on the attachment points of such elements of power plants as the main turbo-gear units (GTZA) , steam generating plants (PPU), steam turbine plants (STU) and nuclear reactors S6W, submarines of the "Seawolf" class can boast an acoustic noise level of about 50-53 dB in the "sneak" mode (at the level of the newest French MAPL of the 4th generation "Suffren" class "Barracuda SNA").

Based on technical information provided by a retired rear admiral and submarine division commander between 1984 and 1989. Vladimir Yamkov in the analytical material "The struggle of people, not ideas", it is easy to come to the conclusion that such objects can be tracked by means of nasal spherical multi-element GAS MGK-600 "Irtysh-Amphora-Ash / Borey" (included in the sonar architecture of the MAPL pr. 855 "Ash / -M" and SSBN pr. 955A / B "Borey / -B") at a distance of about 35-45 km (in the first and / or second distant zones of acoustic illumination / convergence) in normal hydrological conditions, in while the earlier MGK-540 "Skat-3" multipurpose nuclear submarines pr. 971U "Schuka-B" with less sensitive hydrophones and on-board computers with simplified algorithms for processing acoustic information are able to "probe" the "Seawolf" at a distance of 25-35 km.

Installed on the Sea Wulfs, the integrated nasal active-passive AN / BQQ-10 SACs based on spherical acoustic antenna arrays and wide-aperture onboard passive SASs based on AN / BQG-5D multielement acoustic arrays in conjunction with more efficient 70-processor on-board computers for combat information -control systems AN / BSY-2 are able to detect low-noise MAPL pr. 855 / M (do not have water-jet propellers and have a large underwater displacement, increasing the acoustic signature) at a distance of about 60-80 km, "Borei" - about 60 km and, finally , the noisier "Shchuki-B" - 100-130 km. The figures are disappointing ... Meanwhile, there is no need to dramatize.

Despite the fairly high technological parameters of the sonar complexes of the multipurpose nuclear submarines of the Seawolf and Virginia Block I / II / III classes operating in the waters of the Norwegian Sea, the hydrological situation in this region of the North Atlantic does not always favor the successful implementation of informative sonar reconnaissance. The prevailing impact of the cyclones of the Icelandic minimum quite often saturates the region with numerous and prolonged storms, significantly complicating hydrological conditions. As a result, the range of direction finding of our underwater component by means of the American SJC AN / BQQ-10 and AN / BQG-5D decreases from 60-130 to 15-35 km, respectively.

Moreover, there can be no question of the exceptional acoustic secrecy of the underwater component of the US Navy in this region of the North Atlantic and in light of the permanent patrolling of the neutral waters of the Norwegian and Barents Seas by promising Il-38N anti-submarine aircraft of the Russian Navy's naval aviation, equipped with unique airborne search and sighting complexes "Novella-P-38", capable of receiving information about the tactical underwater situation from 64 active and passive radio-hydroacoustic buoys of types RSB-41, RSB-48, densely spaced in the most unpredictable explored areas of the above seas.