The alleged appearance of the KJ-600 aircraft in an unofficial infographic. Photo Twitter.com/RupprechtDeino

For several years, China has been developing a promising long-range radar surveillance and control aircraft, the Xian KJ-600. Until recently, a flying laboratory was tested with the main elements of such an aircraft, and now a full-fledged prototype has come out for flight tests. In recent days, several photographs of this car at the airfield and in the air have been publicly available.

From laboratory to prototype

Work on the AWACS aircraft started at the beginning of the XNUMXs as part of a larger aircraft carrier construction program. fleet... Based on the results of preliminary studies, it was decided to build an aircraft of the type of foreign models - the American E-2 or the Soviet Yak-44.

In 2001, the JZY-7 flying laboratory was built on the basis of the Xian Y-01 serial military transport aircraft. It was intended for full-scale testing of layout and other design solutions. On a standard glider, a variety of electronic equipment (or its mock-ups) in different configurations was installed. In particular, various versions of the radar antenna and its fairing were worked out. By 2012, the car had acquired its familiar appearance with a mushroom antenna fairing.

The experience of ground and flight tests of the JZY-01 was used in the design of the full-fledged KJ-600 aircraft. The main developer of the machine was Xi'an Aircraft Industrial Corporation. For unknown reasons, the design was seriously delayed, and the construction of the future prototype "Kunjing-600" began only in the recent past.

Experienced Xian JZY-01. Photo Bmpd.livejournal.com
In 2018, a mock-up of this aircraft was seen at a research and training facility near Wuhan, imitating a real aircraft carrier. Probably, at that time the features of operating a rather large aircraft in a limited deck space were studied.

At the end of August 2020, foreign media published satellite images of one of the Chinese airfields, where an aircraft of a characteristic appearance was present. A few days later, new photographs were published showing this car in the air, accompanied by a backup aircraft. There are no official data on the tests started yet.

The KJ-600 is based on the serial Y-7 transporter. Improvements to the basic design are associated both with the installation of new electronic equipment and with the proposed basing on an aircraft carrier. In particular, a folding wing structure was introduced to accommodate equipment on the hangar deck, and a landing hook was installed in the tail.

The new aircraft is a high-wing aircraft with two engine nacelles under the wing and a characteristic multi-fin tail. On the fuselage behind the center section there is a characteristic radome radome. Whether the fairing is movable or fixed is not clear yet. 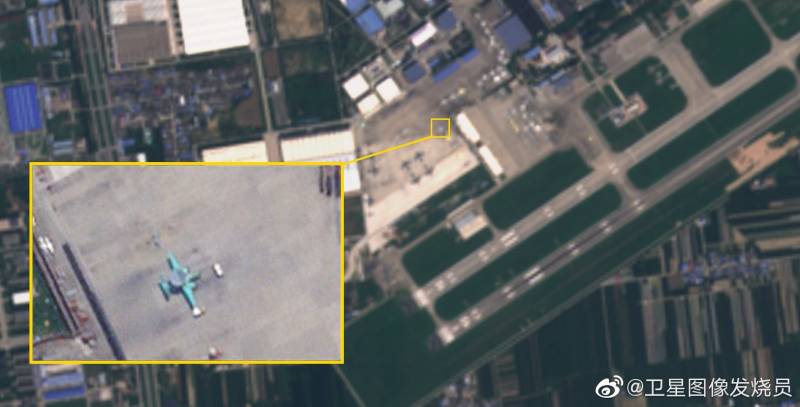 Satellite image of the airfield where the KJ-600 is being tested. Photo by 卫星 图像 发烧 员 / Weibo
Earlier it was reported that the KJ-600 will receive two WJ-6C turboprop engines that have been upgraded. JL-4 XNUMX-blade variable pitch propellers were also offered. With such a power plant, the aircraft will not be able to independently take off from the springboard of the flight deck. To lift into the air, he will need the help of a catapult.

Foreign sources mention that the "Kunjing-600" can receive a pulse-Doppler radar with an active phased array of its own Chinese design. Mention is made of the possibility of using several AFARs with simultaneous coverage in all directions. At the same time, there is an opinion about the use of a rotating antenna. This version can be confirmed by available photographs of an unpainted prototype, in which the radar fairing has a characteristic appearance.

It is expected that the new Chinese radar will be able to detect large ground or surface objects at ranges of up to 600 km. For air targets, the maximum range will be 450 km. The station's ability to detect stealth objects is still unknown.

The KJ-600 is designed for long-term patrols at a distance from the aircraft carrier strike group and monitoring the air and surface situation. The data must be processed and issued to various control points, primarily shipboard. Perhaps the KJ-600 will be able to independently control the actions of the deck aviation.

An aircraft with a radar can significantly increase the situational awareness of the AUG. With its help, the detection lines of enemy ships or aircraft can be taken out at least 500-600 km from the aircraft carrier. With the help of 3-4 of these aircraft, the aircraft carrier will be able to organize a constant watch with an overview of a given area and the timely identification of all possible threats at long ranges.

The promising KJ-600 will become the first carrier-based AWACS aircraft in the PLA naval forces. Now these tasks are solved using Russian-made Ka-31 helicopters with a surface target detection range of up to 250 km and a patrol duration of up to 2-2,5 hours. 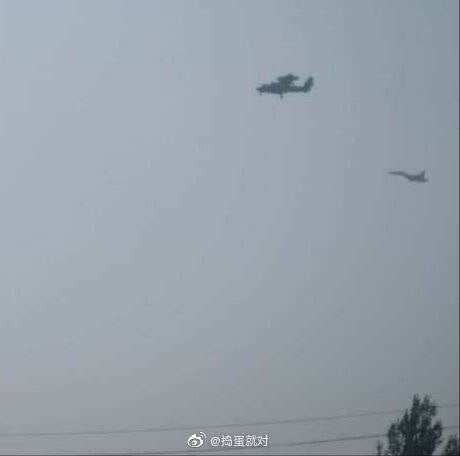 KJ-600 in flight. Photo Twitter.com/RupprechtDeino
In terms of its characteristics and target capabilities, the KJ-600 will have to significantly exceed the available helicopters - with understandable consequences for the combat effectiveness of the fleet. The serial "Kunjing-600" will take over all the main tasks of the radar patrol, but are unlikely to completely replace the helicopter technology.

Earlier, foreign sources mentioned that the first experienced KJ-600 will be able to take off in 2019-20. In general, these predictions came true - flight tests began in August 2020 or earlier. In the near future, the first stage of testing and refinement using land airfields will continue.

Deck tests can only begin in the distant future. For takeoff, the Kunjing-600 needs a catapult, but the PLA Navy's combat aircraft carriers do not have such equipment. The first carrier of the electromagnetic catapult will be the promising Type 003 ship, which is still under construction. It will be ready to receive aircraft no earlier than 2022-23.

Deck tests will also take some time, and only after that the KJ-600 will receive a recommendation for adoption. Serial production and service are expected to start in the middle of the decade. For several years after that, the Navy will be able to receive the required number of aircraft. 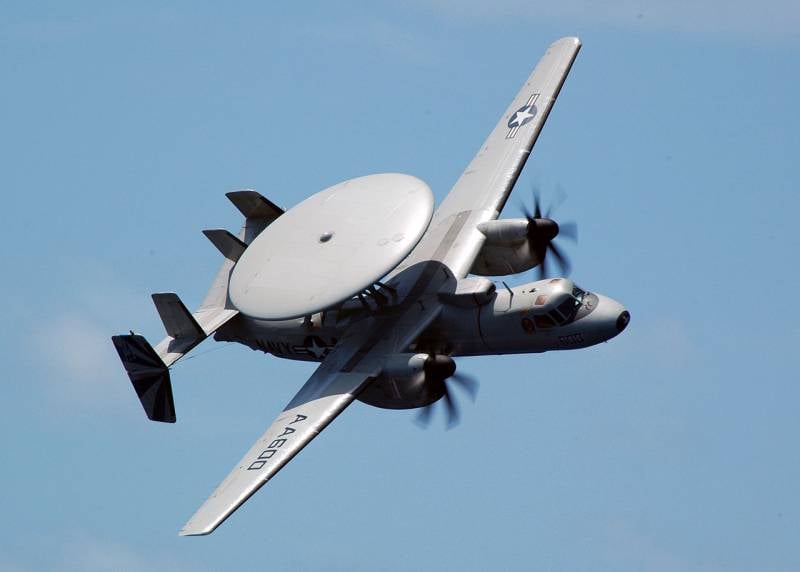 American AWACS aircraft E-2C Hawkeye. Photo by US Navy
According to various estimates, one aircraft carrier "Type 003" requires up to four AWACS aircraft of the new KJ-600 type. So far it is known about the construction of only one such ship, and therefore "Kunjing-600" will not go into a large series. In the future, it is possible to launch the construction of new aircraft carriers - and their aviation group, probably, will also include radar surveillance aircraft. However, in this case, the total number of such equipment will not be large.

To date, the PLA has managed to build a fairly numerous and efficient group of AWACS aircraft, including equipment of several types and generations. However, so far we are talking only about land-based aviation. The first project of a carrier-based aircraft of this class has already reached flight tests of a full-fledged prototype, although it is still far from being launched.

It should be recalled that only a few developed countries have an aircraft carrier fleet. In this case, carrier-based AWACS aircraft are even more rare. Only the United States and France have equipment of this class - they use American E-2C / D Hawkeye aircraft. After completing work on its KJ-600, China will enter a narrow circle of owners of unique and useful aircraft.

Thus, in the context of the Kunjing-600 project, we are talking not only about increasing the combat capability of the aircraft carrier fleet, but also about national prestige. China has already shown its ability to build aircraft carriers and is seeking to confirm it with new ships. The same processes are observed in the field of carrier-based fighters and helicopters. And in the foreseeable future, a long-range radar aircraft will become a key industrial achievement in this area. However, the practical results of projects "003" and KJ-600 are still far enough away, and the Chinese specialists will have to work seriously.