ATGM FGM-148 Javelin: what is it good for and what is bad 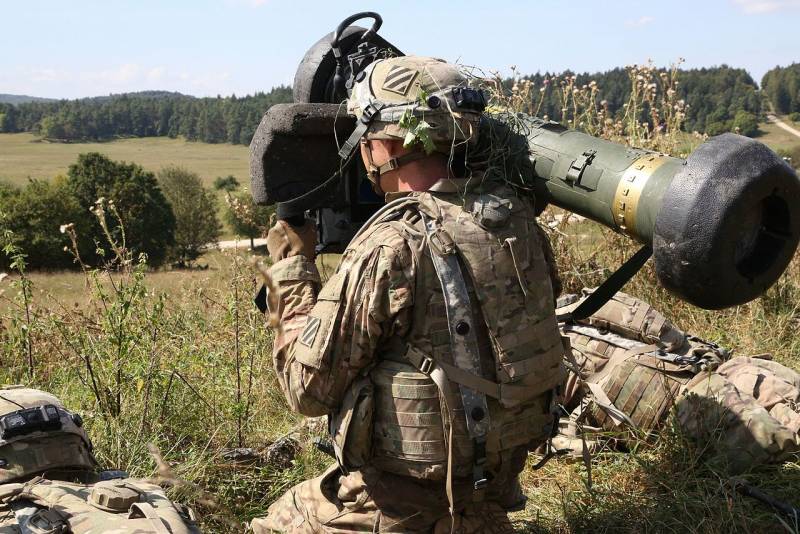 In 1996, the newest anti-tank missile system FGM-148 Javelin entered service with the US Army. It was the first serial ATGM of the new third generation; due to a number of new functions, it compares favorably with existing systems. Subsequently, these complexes were actively used in various conflicts and demonstrated their potential. Javlyn has been found to have both strengths and weaknesses.

The FGM-148 complex includes two main elements - a command-launch unit and a transport-launch container with a guided missile. Before use, the block and the container are connected, after which preparation for launch and firing is carried out. The empty disposable container is then discarded and replaced with a new one.

The command-launch unit is a device with optics (day and night) and electronics for firing control. The main target search tool is a limited-resolution thermal imaging camera. A telescopic sight was originally used as an additional channel. During the next modernization at the beginning of the tenth years, it was replaced by a video camera.

The FGM-148 rocket has a normal aerodynamic design. The folding wings and stabilizers are placed on the cylindrical body. The missile is equipped with a cooled infrared homing head, which provides fire-and-forget operation. A tandem cumulative warhead with penetration of at least 600-800 mm behind ERA was used. 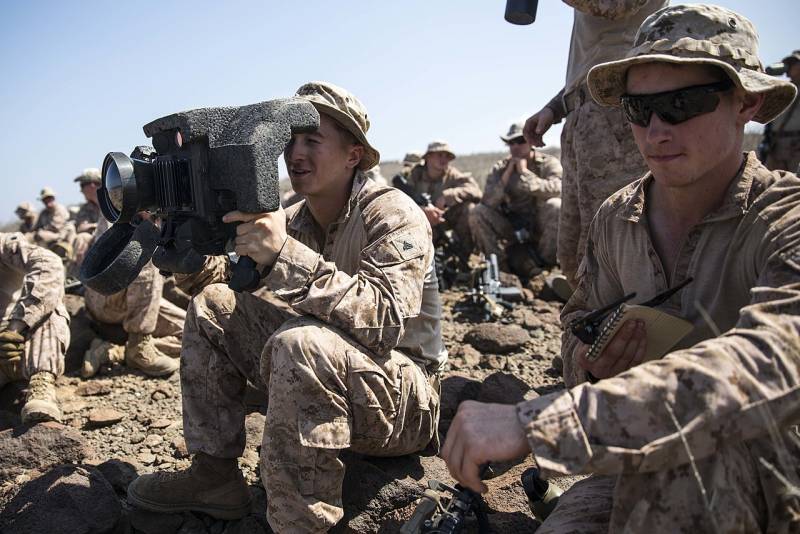 The rocket on the trajectory accelerates to 190 m / s. With the use of the command unit of the first version, the firing range is limited to 2,5 km; the modernized version made it possible to bring it up to 4 km. After the start, the rocket rises to a certain height corresponding to the firing range, and then dives towards the target. For the most effective defeat, the product hits the upper hemisphere - the least protected part of a modern armored vehicle.

"Javlin" in combat position has a length of approx. 1,2 m and diameter no more than 450-500 mm. Weight - 22,3 kg. The calculation of the complex includes two people. At the same time, the characteristic ergonomics allows one soldier to use such an ATGM. If necessary, the complex can be used with a tripod machine or with a carrier machine.

ATGM FGM-148 has a number of obvious advantages that distinguish it from other systems of its class. First of all, these are small dimensions and weight, which make it easy to carry and use. The crew can quickly and easily take a firing position, find and attack the target. Then you can change the TPK and make a new shot or leave the position.

The command and launch unit uses optical means, incl. thermal imager. This allows you to search for and attack targets at any time of the day, and also provides resistance to the effects of electronic warfare and some types of smoke screens. Until the recent modernization, the ATGM did not have a laser rangefinder and did not unmask itself with radiation.

A characteristic feature of the third generation ATGM, to which the Javelin belongs, is an autonomous missile seeker, which implements the “fire and forget” principle. After launch, the rocket independently tracks the target and aims at it. Thanks to this, the calculation gets the opportunity to quickly start preparing for the second shot or leave the position before the retaliatory strike. 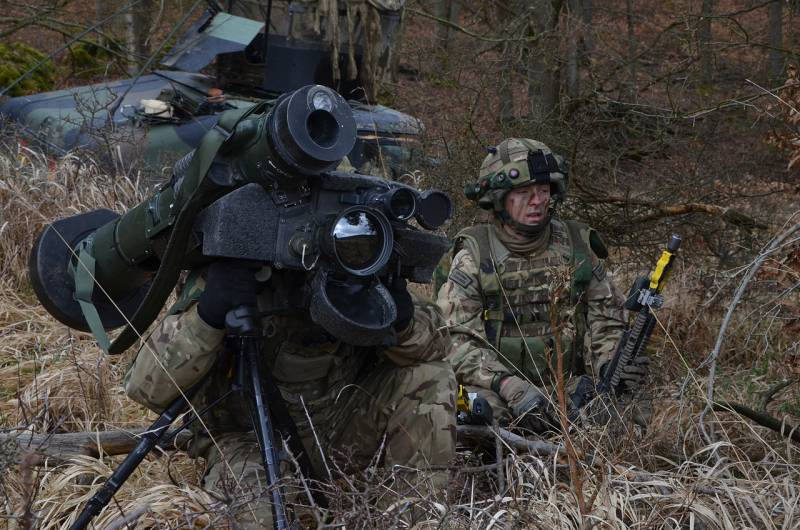 The missile carries a tandem warhead with high armor penetration rates. According to the declared characteristics, the rocket is capable of striking head-on most of modern tanks, as well as any outdated armored vehicles, incl. equipped with dynamic protection. At the same time, a special flight trajectory is used, which allows you to get into the least protected target projection and most fully realize the potential of the warhead.

Due to the combination of characteristics and capabilities, "Javlin" can fight a wide range of targets. First of all, these are medium and main enemy tanks. It is also possible to destroy armored vehicles of any other classes. If necessary, firing at low-altitude low-speed targets such as helicopters is allowed. The main requirement for the target is contrast in the infrared range and being within the fire zone.

For all its advantages, the FGM-148 ATGM is not without its drawbacks. The main one is the highest cost of all its elements, incl. consumable. From this point of view, Javelin "surpasses" any other modern anti-tank systems. FY2021 U.S. military budget provides for the purchase of missiles in TPK at the rate of $ 175 thousand per unit. The price of the command and launch unit has long exceeded 200 thousand.

The high cost of consumable ammunition affects both combat use and the training of personnel. Even the Pentagon, with its record budgets, is forced to limit the number of practical launches during training and maneuvers, as well as to expand the use of training complexes. 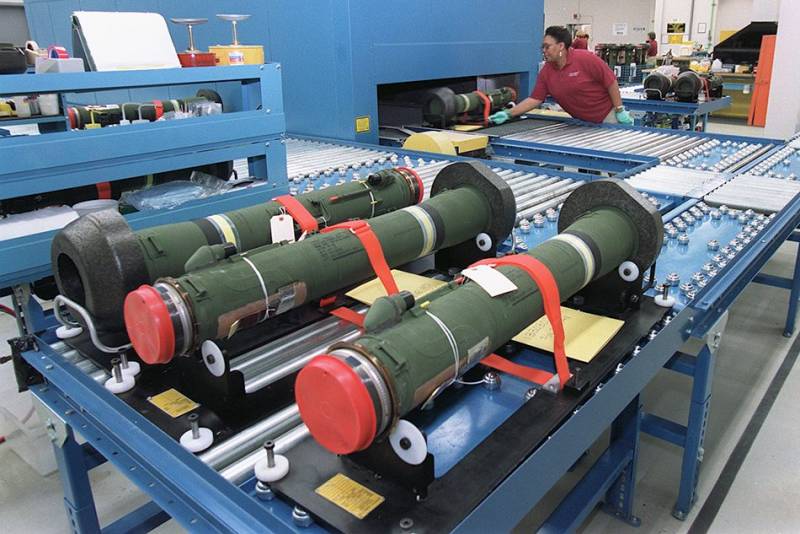 The missile of the complex does not differ in high flight performance. First of all, this limits the firing range. Even the modernized ATGM can only hit 4 km, which is significantly less than the range of competing foreign developments. However, even this range allows the crew not to be afraid of return fire from small arms weapons and reduces the risks associated with enemy artillery.

The relatively low speed makes the missile more vulnerable to the active protection of the target tank. A flight to a distance of 2,5 km takes more than 13 seconds, and the automatics of the armored vehicle gets a significant margin of time for reaction.

The seeker of a missile with a fire-and-forget function is not without its drawbacks. So, there are known examples of the combat use of ATGMs, in which the missile could not hold the target and missed. According to known data, the reason for this was the lack of contrast between targets and the surrounding area. In this case, the operator does not have the opportunity to correct the trajectory or re-aim the missile at another object.

The command-launch unit uses only optical devices, which limits its observation capabilities. Modern smoke screens easily disrupt optics and hide potential targets. The upgraded version of the unit has a laser rangefinder to increase the accuracy of calculations, but its beam is unmasked by an ATGM. Having detected radiation, the target tank can turn on means of suppression or respond with a shot.

ATGM FGM-148 Javelin entered service with the developing country almost a quarter of a century ago. Subsequently, this product entered mass production and was actively used by the troops in exercises and in real operations. There have been many export contracts. For all customers, approx. 10-12 thousand command blocks and more than 45 thousand missiles. 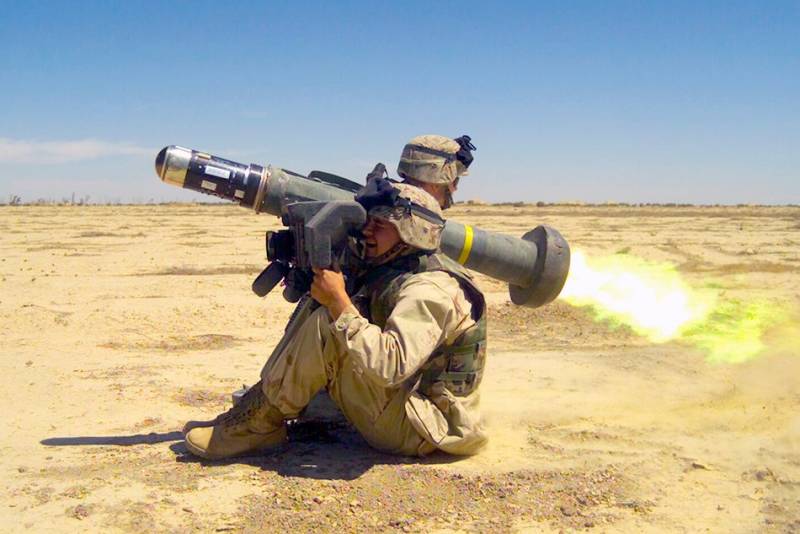 During the operation "Javlin" showed its capabilities. Its positive qualities were confirmed - but the personnel constantly had to face serious restrictions of various kinds. Because of this, the operation of anti-tank systems turns out to be quite expensive, and the defeat of a training or real target is not guaranteed.

In general, the FGM-148 can be considered a fairly successful - and advanced for its time - development in the field of infantry anti-tank weapons. The widespread use of advanced technologies made it possible to obtain a high combat potential. However, its implementation requires a full and effective training of personnel, as well as the competent use of weapons on the battlefield.

Several years ago, the basic ATGM was modernized, which made it possible to increase some of the characteristics - first of all, the launch range and the reliability of optoelectronic systems. By now, according to the experience of operating weapons, there is a need for a new update. According to the results of such events, Javelin will be able to get rid of all the main shortcomings and again become one of the most effective anti-tank systems in the world.

However, in its current form, the FGM-148 has long and firmly taken its place in the armies and on the international arms market. Political factors were important, but technical and operational characteristics also contributed. Further improvements in design, as well as maintaining support from the army and military diplomats, will allow the Javelin product to maintain or even improve its position in the world.