"Thor" trying on a peakless cap 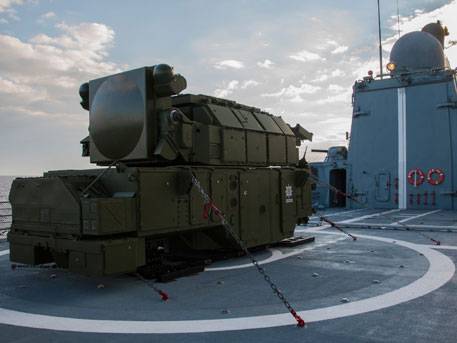 The current state of naval weapons and military equipment is distinguished by a noticeable imbalance between the offensive and defensive capabilities of ships and naval groupings. The old competition of armor and projectile at this stage again wins the projectile. The latest and most promising ship-based air attack weapons (and sea aviation) is distinguished by a sharp increase in the firing range. So, if the range of the first modifications of the Harpoon anti-ship missile system was 140 km, then in the promising LRASM anti-ship missile system located in the same class, it should reach 900 kilometers or more. This allows launching outside the range of the ship's air defense systems, which seriously complicates the provision of anti-aircraft cover. A symmetrical answer (increasing the firing range of shipborne air defense systems) becomes practically impossible: it is difficult to imagine what the ship's displacement should be so that ultra-long-range air defense systems can be placed on it. Thus, the priority task of the naval air defense is becoming the fight not against naval aviation, but against high-precision weapons... And this task should not be assigned to long-range air defense systems, but to short-range air defense systems: their missiles can be placed on ships 10-20 times larger, which will allow even a single medium-displacement ship to reflect a massive air raid. Therefore, the creation of a modern shipborne short-range air defense system is becoming an important task in the construction of fleet... And this task is being successfully solved.

This complex is capable of detecting EHV at a distance of up to 32 km - to the border of the radio horizon. The number of simultaneously processed marks from targets - up to 144, simultaneously tracked priority targets - up to 10. The reaction time of the complex is 5-10 seconds. At a distance of at least 15 km, the complex is capable of intercepting targets flying at a transonic speed (the speed of most anti-ship missiles of NATO countries, including the latest LRASM, does not exceed the speed of sound). Interception height - from 5 meters to 12 km. At a distance of 7-8 km, targets with an effective scattering area of ​​0,1 m are guaranteed to be intercepted2 and flying at Mach 2. (The maximum speed of air targets intercepted by the "Tor" air defense systems during operation was Mach 3.) which destroyed dozens of air targets. Up to 100 targets can be fired at at the same time, the launch interval of missiles is less than 4 seconds. The course parameter of intercepted targets is ± 3 km (this will allow the complex to be used not only for the self-defense of the ship, but also for covering the formation, including the one in a dispersed order).
The tests that have passed to date have fully confirmed the possibility of using the Tor family air defense systems on combat and auxiliary ships and the Navy. In 2015, the Tor-M2U air defense missile system, working from the coastal strip, successfully detected and hit targets moving above the water surface. In 2016, the Torah was tested in the open sea. ABM "Tor-MKM" was installed on the deck of the frigate "Admiral Grigorovich". The frigate went at a speed of 7-8 knots, the air situation was created by two types of targets. The Saman target missile simulated a high-speed air assault vehicle following a dive trajectory. The second target imitated a Harpoon-type anti-ship missile flying at an ultra-low altitude (5 meters above sea level). SAM "Tor-M2KM" has successfully worked on both targets. A serious difficulty in working against low-flying targets in the open sea is the presence of natural interference from the water surface. Based on the results, the commission recommended to modify the software of the complex for its maximum combat use in sea conditions. The "marine" algorithm was developed in a short time. In 2019, tests were carried out on the bank of the Votkinsk reservoir in order to test a new algorithm for the operation of the software of the complex. SAM "Tor-M2KM" worked from the shore at targets that went over the water at an ultra-low altitude. The tests were successful - all targets were detected in time and conditionally hit, the altitude of their flight was determined accurately and unambiguously, despite natural interference from the water surface. Tests have confirmed the effectiveness of new algorithms for the software.

By now, the appearance of a promising ship complex has been largely formed. SAM "Tor-MF" is intended for newly built ships and sent for overhaul and is fully integrated into the structure of the ship. The control system (antenna post) of the complex is installed on a stabilized platform on the deck or on the ship's superstructures. The combat post of the complex (operator's compartment) is located in the underdeck space and contains the workplaces of the commander and operator, a simulator, and means for interfacing with ship systems. Unified launchers, carrying several packages (cassettes), with 4 missiles in transport and launch containers in each, are placed in the under-deck space in the amount required by the Navy and provided for by the ship's design.

SAMs of the "Thor" family can be used on previously built combat and auxiliary ships of the Navy without taking them out of service. This option involves equipping ships with the Tor-M2KM autonomous combat module, which can be quickly installed on the deck.

The choice of the "Tor-MF" air defense system as the main means of providing ship-borne air defense in the short-range zone also has the advantage that the complex is unified with the "Tor-M2" for the majority of nodes and devices. Unification reduces the development time and by increasing the serial production - the cost of manufacturing products. This makes it possible to supply the fleet with the required amount of air defense equipment faster and at lower cost.

The creation of the sea "Thor" will provide the fleet with a reliable and effective short-range air defense system that can be deployed on ships of both large and medium displacement and small displacement, significantly increasing their air defense capabilities. The equipment of the operating combat and auxiliary ships of the Tor-M2KM air defense system, and of the ships under construction and undergoing overhaul, the Tor-MF air defense system will ensure their reliable protection against anti-ship missiles flying at ultra-low altitudes, long and medium-range cruise missiles, guided aircraft bombs, anti-radar missiles, unmanned aerial vehicles, planes and helicopters. Solving at the same time the tasks of both self-defense of the ship, and group protection of the formation of ships.

Ctrl Enter
Noticed oshЫbku Highlight text and press. Ctrl + Enter
We are
The defenselessness of "Thors" and "Pantsiray" before the "blow to the crown" is preserved! Important "signals" exercises of the Air Force of South KoreaAnti-aircraft missile systems of the Tor family
19 comments
Information
Dear reader, to leave comments on the publication, you must to register.