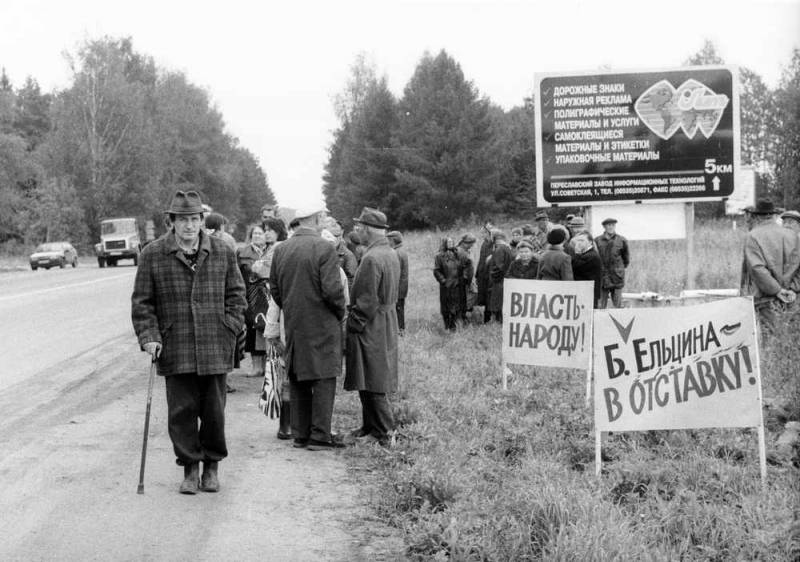 The first president of our country Boris Yeltsin today can hardly be called contradictory historical figure. As shown by public opinion polls, the absolute majority of Russians have a sharply negative attitude towards him. No, there are those who sing to Boris Nikolayevich for the "flourishing of democracy", but there are definitely a handful of them. For the most part, those times are remembered, so to speak, with an unkind word. What exactly is blamed on Yeltsin and his team?


I'll start with global things: the destruction of the Soviet Union, in which Yeltsin took the most active part, and blocking attempts to create, albeit pale, but an analogue of the USSR - the Union of Sovereign States, into which 9 of the former 15 fraternal republics were considering joining. Boris Nikolayevich's foreign policy, which was, for the most part, reduced to capitulation actions, was no less disastrous. How he managed not to give the Kuril Islands to Japan for thanks, God only knows. There were corresponding plans. In short, the complete surrender of Russian interests in the international arena and encouragement of open interference in our internal affairs of the "collective West" and, above all, the United States.

The flirtation with our yesterday's most likely opponents was accompanied by an unprecedented defeat of the country's armed forces and military-industrial complex. The "conversion" beautifully presented in the media actually led to a catastrophic decrease in the state defense order, the ruin and destruction of the most important enterprises in this industry. Chronic underfunding of the army led, in fact, to its collapse.

The horrific consequences of Boris Yeltsin's actions as commander-in-chief were fully manifested during the Chechen war, which is also largely his personal "merit." And, by the way, those who to this day continue to regard the first president as “the beacon of freedom” and “the father of Russian democracy” would be well advised to recall the tragedy of autumn 1993. Street fighting in Moscow, shooting tanks parliament ... There was no such thing in Russia before Yeltsin and, I want to believe, will never happen again.

As for the economy, then, really, it is difficult to say which of Yeltsin's decisions and global undertakings were the most disastrous, caused the greatest harm to the country and its people. The privatization that has turned into a total plunder of the national property, aptly nicknamed "grabbing"? “Shock therapy” that has ruined and pushed millions of people to the brink of starvation? Ill-conceived, if not harmful, credit and financial policies? All these things, coupled with the deindustrialization of the country and the destruction of its industrial potential, led to two severe economic crises and the 1998 default. A world power with a powerful industrial and scientific potential was turning into a poor raw material appendage of the West before our very eyes.

Naturally, such catastrophic changes could not but lead to dire consequences for the overwhelming majority of Russians. Yeltsin's social policy (if one can speak of it in principle) was the apotheosis, the standard for the failure of the actions of the state leader. In fact, it consisted in the fact that not only socially unprotected strata of the population were thrown to the sidelines of life, but also those who make up the backbone of the country: skilled workers, peasants, security officials, engineers and technicians, people of science. All of them were asked to survive as best they can.

The result was a catastrophic increase in crime: Russia turned into an arena of bandit "showdowns" and criminal wars, annually claiming tens of thousands of lives. The levels of drunkenness and drug addiction have risen to unprecedented levels. The results were not long in coming: according to official statistics, already in 1994, the death rate in Russia increased to 2,3 million people per year, compared with 1,7 million in 1991, which was also far from good. A sharp drop in the birth rate, an exponential increase, by orders of magnitude, emigration from the country - all this gave rise to that demographic "hole", the consequences of which Russia will clear up for a long time.

Attempts to remove Boris Nikolayevich from the presidency were made three times: twice in 1993, and once in 1999. The initiators of the last impeachment, in fact, very clearly formed the "top five" of his most serious sins: the collapse of the USSR, the bloody events of 1993, the war in Chechnya, the undermining of the country's defense and, summarizing all the economic and social "exploits", accused Yeltsin of the genocide of the Russian people. Neither subtract nor add.