The tension in the world is growing. War is imminent 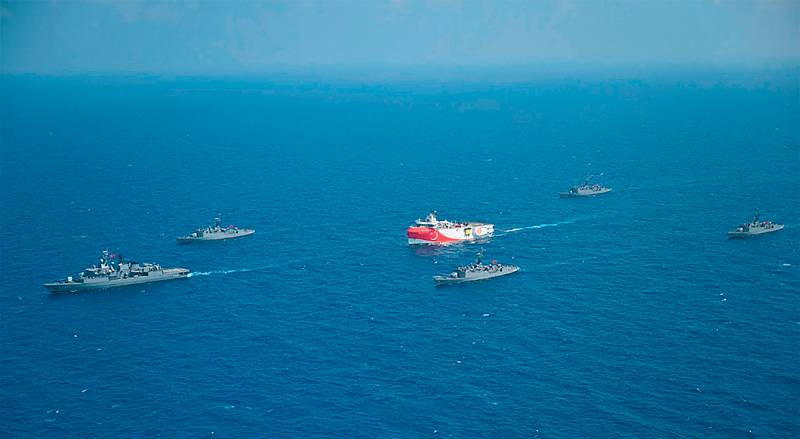 The world economy is in depression. People around the world are demanding change. The epidemic prepared society for a lot of blood: from depression and apathy to anger and violence. The world is being pushed into a big war.

The war continues in Syria and Libya. It smells of blood on the border of Armenia and Azerbaijan. Conditions have been created for a clash between Turkey and Greece, backed by Egypt, Israel and France. The United States is split into two peoples and two elites, and the preconditions for a fierce civil war have been created. Tensions arose on the border between India and China. There are many other "powder magazines" that can explode at any moment: India and Pakistan, China and Japan, South and North Korea, etc.

Events suddenly began in Belarus, which was considered a stronghold of stability. Ukraine is in a permanent crisis. Unpleasant bells sounded in Russia as well: Arkhangelsk, Bashkiria and Khabarovsk. Unfortunately, after the collapse of the USSR, Russia remained at a crossroads. Not daring to take a step either towards the complete victory of capital and liberalism, or towards the revival of Russianness and autocracy, an independent role in the world. This position of the Russian warrior at a crossroads has already ruined millions of lives, and every citizen of a great power will pay dearly for Moscow's indecision. The former republics of the USSR did not manage to create their own full-fledged statehood; they do not have their own vision of the future and paths.

Thus, disorder and chaos are growing in the world. The final breakdown of the post-war order takes place. The destruction of the USSR was the first stage at the beginning of the global turmoil. An American-style unipolar world was established, but it quickly sank into oblivion. A global crisis began, a crisis of capitalism, a crisis of the liberal model, a crisis of the petrodollar system. It was flooded with money. However, the exacerbation was only delayed. In 2013, the Middle East front of the world hybrid war was opened. Since that time, the funnel of chaos in the world has only increased. In particular, in 2014 Ukraine was “blown up”.

Collapse of the old system

The situation has not improved since that time. Debts grew, contradictions, mutual grievances and hatred accumulated. Liberal ideology has degenerated and is no longer able to restore the former stability of the 1980s - 1990s. What's next? Sliding into chaos.

Thus, the collapse of the old world order is taking place before our eyes. Through local conflicts in Libya, Syria, Yemen and Afghanistan, which have become regional. Through the preparation of new wars, including the conflict between Greece and Turkey over disputed territories, sea shelves and hydrocarbons. Through weapon pandemics. By strangling the middle class in Europe and the United States, leading to serious social upheaval. Through the collapse of the oil and gas market, in general of all raw materials. In addition to food and gold, which is another signal that a storm is coming. All root problems can be solved, but through blood and cruelty. Humanity has no method more universal and more effective than war.

A war in the presence of nuclear missiles seems like madness. However, once the collapse of the USSR seemed an impossible nightmare. And US nuclear strikes against Japan. And 2020 has already brought a lot of surprises. In particular, the American Democrats are right now leading the case to a civil confrontation in the United States. They urge not to recognize Trump's possible election victory. Against the backdrop of viral psychosis, the largest fall in the world's leading economies, including the American one, since the Great Depression, this is very dangerous. Taking into account the epidemic of violence that has already begun in the United States, the "black revolution". However, by all accounts, democrats and supporters of globalization are ready for a civil conflict. The United States is in a dire crisis, and we may soon see the greatest geopolitical catastrophe of the XNUMXst century - the second civil war and the collapse of the United States. Democrats are not afraid of this prospect. They even design it. As before, the United States, led by Democratic presidents, planned "color revolutions" across the planet.

Democrats, globalists and liberals are not going to give in to Trump. Otherwise, their project of globalizing the planet will collapse. Therefore, the radicalization of the conflict in the United States is inevitable. Obviously, in this case, the United States will have no time for world problems. The world gendarme and arbiter, who has already largely resigned from his powers, will be busy with an internal conflict. A "window of opportunity" will appear. For example, Erdogan is building a new Turkish empire right now. Hence the activity of the Turks in North Africa, Syria, Iraq, the Caucasus and the Balkans, the Mediterranean Sea, etc. China can solve the Taiwan problem by channeling the discontent of its middle class. Old and new conflicts will erupt across the planet. The beginning against the background of huge accumulated energy in people can be quite spontaneous. For example, the Greeks will not yield to Turkish ships or accidentally shoot down a plane. Indian border guards will open fire on the Chinese in the disputed territory, they will respond. The old system will finally collapse until the centers of power ("thrones") create a new order.

It is also a unique opportunity for Russia to return to the Russian way. Save yourself in the storm of global turmoil. Create your pole. Reunite the divided Russian world and the Russian people. To create an ideology and a principle of unity for those who wish to be with Russia and the Russians. To restore the autonomous national economy, science, the system of education and human upbringing, and health care.

Ctrl Enter
Noticed a mistake Highlight text and press. Ctrl + Enter
We are
An alternative to Armenia’s entry into the Eurasian Union is warThere will be no “West vs Russia” situation in the Karabakh conflict: interview of expert Sergey Minasyan
228 comments
Information
Dear reader, to leave comments on the publication, you must to register.