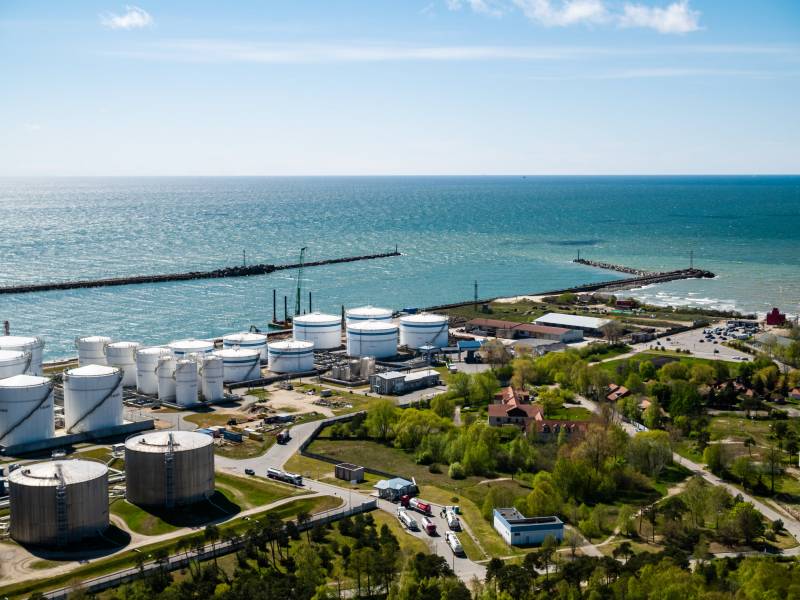 In Belarus, Lithuania was threatened with sanctions in response to the support of the Lithuanian authorities of the Belarusian opposition. Minsk is preparing to end trade through Lithuanian ports, but who will benefit and who will lose?

President of Belarus Alexander Lukashenko made threats against Lithuania on August 28, 2020. He stated that he had submitted to the government a proposal to reorient all trade flows from Lithuanian ports to other directions. According to the Belarusian president, 30% of Lithuania's budget is formed by Belarusian trade, so the blow to the economy of the neighboring state will be extremely significant.

The Prime Minister of Lithuania Saulius Skvernelis, in turn, said that Lukashenka does not like his people, since he is ready for such measures. According to Skvernelis, Belarus itself will suffer more from the restrictions than Lithuania, since Minsk has no opportunity to reorient cargo flows to the ports of Russia or Latvia. Lukashenka's words were greeted with a similar assessment by the Minister of Foreign Affairs of Lithuania Linas Linkevičius. However, can you be so sure that Belarus will not really close the import and export of goods through Lithuania?

The Lithuanian port of Klaipeda plays a key role for the Belarusian cargo traffic. Firstly, the Klaipedos Nafta oil terminal is located here, which allows Belarusian oil products to be exported and receives oil purchased by Minsk from countries other than Russia. For example, in June and August 2020, tankers with oil from the United States arrived in Klaipeda.

Secondly, the terminal of mineral fertilizers Biri Krovini Terminalas in Klaipeda is also largely focused on the Belarusian cargo traffic. In 2019 alone, it handled 10 million tons of cargo, 98% of which were products of Belaruskali. Consequently, if Belarus stops the transit of mineral fertilizers through Klaipeda, the terminal will actually be left without loading, and its employees - without work and income. The volume of tax revenues to the Lithuanian budget will also decrease.

However, one should remember here the specifics of the policy of the modern Lithuanian state, as well as of Poland and other Baltic republics: in fact, their main mission is to be the conductors of American influence in Eastern Europe, so if Washington decides that Lithuania or Poland should support the Belarusian opposition, then Vilnius or Warsaw will implement it even to the detriment of their own interests. In the end, Poland had to forget about the atrocities of the Banderaites, when the USA and NATO needed to use Poland to help the ideological heirs of the Banderaites in modern Ukraine.

Who will lose more - Vilnius or Minsk

Lukashenka’s threats were accepted in Lithuania, in words, of course, quite calmly, since they believe that the Belarusian authorities will not be able to promptly redirect cargo flows through other countries. Now Minsk has a difficult relationship with Kiev and even with Moscow. Of course, the Russian ports would not be hurt by extra loading, but this will require additional efforts in the logistics area. Does Belarus have the resources and opportunities for this now?

In addition, Belarus itself benefits from the export of mineral fertilizers, oil products and other goods through Lithuanian ports. The closure of the Lithuanian route will harm Minsk itself, which will not be very good for Lukashenka, especially in the current situation.

But if we talk about the scale of losses that the countries can incur as a result of the termination of the transit of goods through Klaipeda, then Lithuania's position will ultimately turn out to be worse than the position of Belarus. For all that, the Belarusian state has the opportunity to act through Russia, which remains the main Belarusian partner, but Lithuania will simply have nothing to replace the cargo traffic from Belarus.

At one time, disagreements between Moscow and Minsk played into Lithuania's hands, but now Lukashenka will be forced to change his behavior towards Russia, and then the Lithuanian terminals may indeed face black times. All that remains is to count on new loans from the United States and the European Union, and if there are no such loans, the economic situation in Lithuania will in any case worsen.

As for our country, it will certainly be much more profitable for us if the flow of goods from Belarus and to Belarus goes through Russian ports. This will increase the revenues of the Russian budget from tax revenues, give additional load to Russian terminals and logistics infrastructure, and create new jobs.

Ctrl Enter
Noticed oshЫbku Highlight text and press. Ctrl + Enter
We are
Lithuanian Prime Minister wants to restore political contacts with RussiaSituational analysis of the death of the MH17 flight (Malaysian Boeing 777), made on the basis of engineering analysis from 15.08.2014
86 comments
Information
Dear reader, to leave comments on the publication, you must to register.