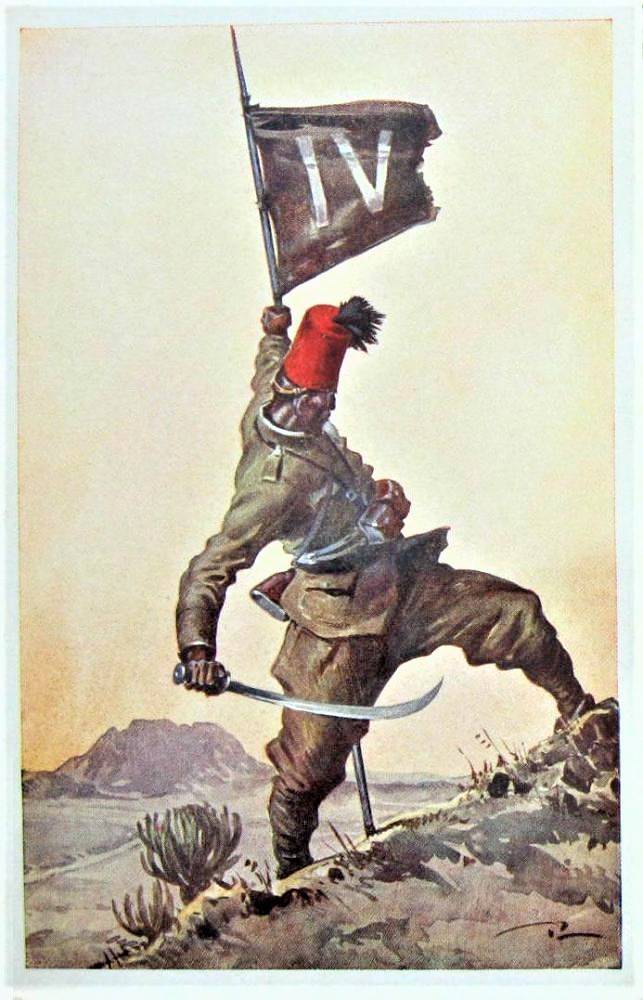 At the heart of everything is Ankara's desire to take control of large reserves of oil and gas resources at the junction of the Mediterranean and Aegean basins. It is no coincidence that Ankara's regular military demonstrations in the area coincided with its new aggressive actions in northern Iraq and northern Syria.

Let me remind you that these regions are the "objects" of a very long-standing Turkish desire, since the founding of the Turkish Republic itself. The goal of the Turks for more than a few years now has been the mastery of the oil and gas resources of these regions.

In general, this is more than 1,3 billion tons of standard fuel in terms of proven-proven reserves in 2018 and an extensive network of oil and gas pipelines from there to the Turkish ports of Ceyhan and Yumurtalyk, close to Syria. 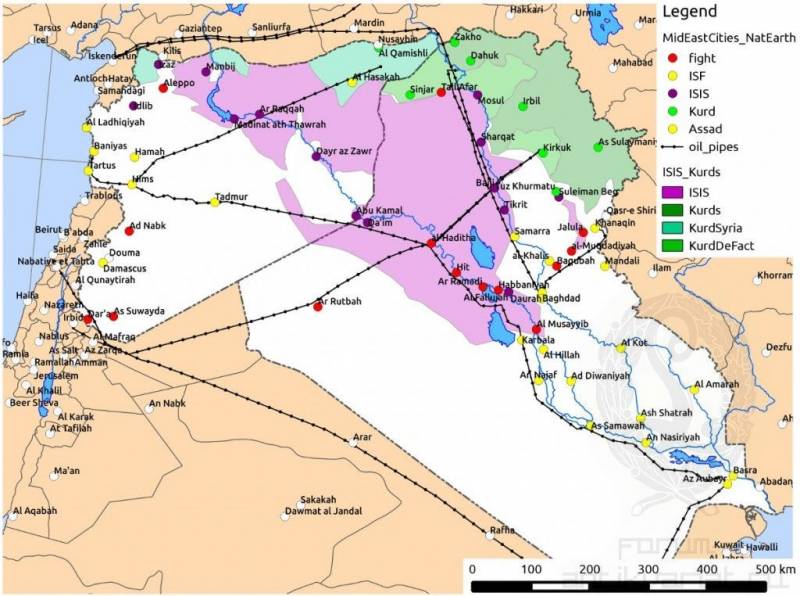 Oil and gas hub of the Western Mediterranean
It can be said that the "western" continuation of this course is the striving of Ankara, which has clearly manifested itself in recent months, to fully seize the large oil and gas reserves of the shelf disputed by Greece. In addition, this is stimulated by the proximity to mainland Turkey and the associated low cost of extraction and delivery of raw materials.

Turkish interest is not limited only to the shelf. Ankara is also looking closely at the Greek islands adjacent to the shelf. In the event of their annexation, which, in principle, is not difficult to implement, Turkey will fully possess the transit route Black Sea - Bosphorus - Dardanelles - Aegean Sea - Mediterranean Sea. On the agenda, it seems, is again the curse of the straits a century ago.

A special Turkish dossier was prepared for I. Stalin in 1941, taking into account the possible entry of the southern neighbor into the war on the side of Germany. A continuation was made already for N. Khrushchev in the mid-50s.

These dossiers noted that the conflicts in the southeastern part of the Aegean Basin, near its "docking" with the Mediterranean Sea, began in 1913. Italy, having defeated Turkey in the war of 1911-1912, which was then called Tripolitan, captured not only Libya, but also the Dodecanese Islands (about 2400 sq. Km) with adjoining waters in the southeast of the Aegean Sea. 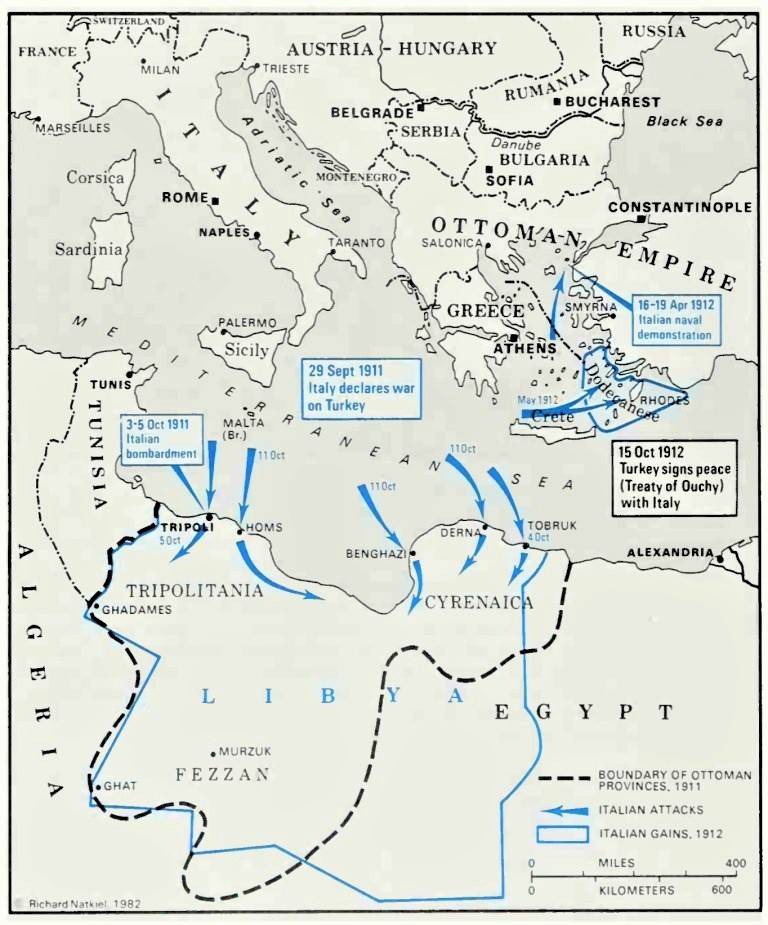 Italo-Turkish, or Tripolitanian war
However, the maritime boundaries between Italy and Turkey were not agreed on almost their entire length. This situation continued after the overthrow of the Ottoman monarchy.

At the end of 1944, British troops captured these islands (where part of the German troops evacuated from Greece was concentrated) with the expectation of transferring them under the "temporary" care of Great Britain. Turkey began to demand the "return" of this archipelago, but London refused.

The position of the USSR at that time was "pro-Greek": it was that these islands should be transferred to Greece, a member of the anti-fascist coalition, which experienced two Italian aggression (in November 1940 and in April-May 1941, together with the Nazi invasion).

The USSR held this position, despite the fact that in Greece in 1945-1950. the terror of the authorities and the British troops (the latter were in Greece in 1945-47) against the communists continued, and the threat of a military invasion of Greece into "pro-Soviet" Albania continued until the mid-50s.

In 1946 the British administration of the Dodecanese was replaced by the Greek one, but the maritime borders of Greece with Turkey in this area and in the adjoining Mediterranean region were again not agreed. And since January 1948, the archipelago, on the basis of the Paris Peace Treaty with Italy (1947), was officially included in Greece with the same border disputes with Turkey.

The entry of Greece and Turkey into NATO in 1952 temporarily mixed these disputes. Turkey, on the one hand, has "forgotten" about its claims to these islands, but continues to dispute in that area the maritime borders of Greece, which are located there only 3-5,5 miles from the Turkish coast.

Exploration of potentially large reserves of oil and especially gas in the waters adjacent to those islands began after the above-mentioned dossiers were somewhat outdated. British and American companies settled between Greeks and Turks in the late 60s and early 70s, which only exacerbated their disputes.

The oil and gas factor also played a role in the coming to power in Athens in 1967 of the junta of "black colonels". Military excesses in the area have since happened almost regularly. But NATO mediation did not allow the Turkish-Greek war to break out.

However, Greece's attempt to annex Cyprus in 1974 and the occupation of Northern Cyprus by Turkish troops at the same time, which continues to this day, could not but aggravate Turkish-Greek relations. Naturally, border disputes in the Aegean region and in the adjoining Mediterranean region did not subside either. 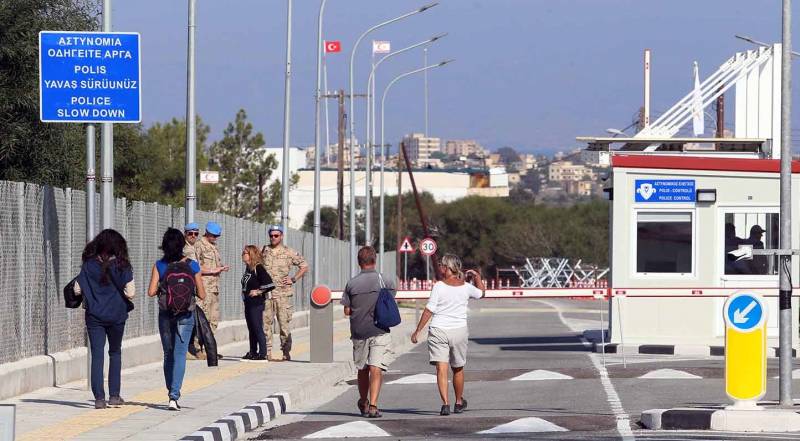 Today the de facto border of Turkey runs through the land of Cyprus
Geological exploration work in this area was often accompanied by border incidents. It even got to the point that "Stalinist" Albania in 1974 assured the nationalist regime of "black colonels" of Tirana's readiness to provide military assistance to Athens in the event of a direct military conflict with Turkey.

Due to the Cyprus conflict, both sides refused to settle their disputes at the 1975 Helsinki Conference on the Inviolability of Post-War Borders and Cooperation in Europe. At the same time, Greece and Turkey signed the well-known Helsinki Act and the principle of the inviolability of the post-war European borders declared by this document.

Nevertheless, almost the entire length of the Turkish-Greek maritime border with a total length of up to 570 km remains in dispute. As for Cyprus, Turkey generally does not recognize either the land or sea borders of this independent republic.

Nevertheless, the Republic of Cyprus and Greece in the mid-90s and early 2010s agreed on the joint development of the shelf near the Dodecanese Islands, but the projects were not implemented due to the same disputes. As for the location and volume of these resources, here is the information of the Russian-Greek analytical portal Greek.ru dated February 2, 2011:

Discovered high potential for oil and gas production in the Herodotus Basin between Greece, Cyprus and Egypt. A significant part of these reserves are located in Greece in the southern and southeastern sectors of the water area near the Dodecanese Islands. Large deposits of oil have been found in the sea area south of Crete. But whether these territories belong to Greece, Egypt or Libya is not fully determined.
Also the subject of the conflict between Greece and Turkey is the hydrocarbon shelf of the Greek island of Kastelorizo ​​- the most remote island in the Dodecanese archipelago in the southeast of the Aegean Sea. But the countries cannot agree on the borders in these areas. " 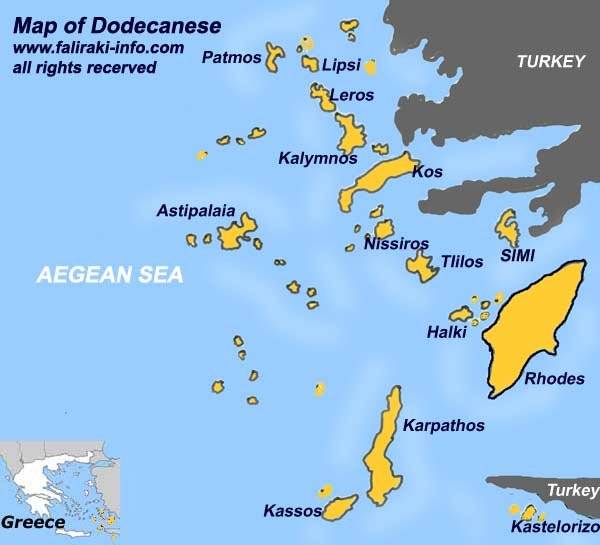 Dodecanese islands
One way or another, the very fact of Turkey's official refusal to recognize the Republic of Cyprus, which is recognized by the entire international community and, accordingly, its borders, like the sea borders of Greece, is dangerous. The refusal demonstrates Ankara's readiness for large-scale military and political conflicts in a vast region. This, among other things, is also confirmed by the notorious policy of Turkey in Syria and Northern Iraq.