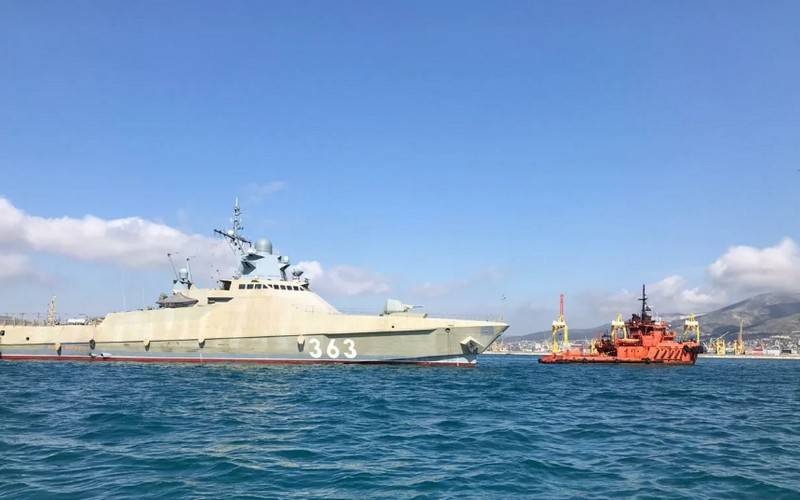 The third patrol ship of Project 22160 "Pavel Derzhavin" performed the first firing during state tests on the Black Sea. The press service of the Black Sea fleet.

The crew of the newest Project 22160 patrol ship "Pavel Derzhavin", built for the Black Sea Fleet, conducted the first artillery firing in the Black Sea. The event was held at the maritime combat training range as part of the state tests of the ship
- said in a statement.

As part of the state tests, the crew conducted test firing from the AK-176 artillery mount, large-caliber naval machine guns and DP-65 anti-sabotage grenade launcher systems. In addition, the work of the PK-10 close range jamming complex was tested.

Let us remind you that for the first time the Pavel Derzhavin set sail for sea trials on 23 July. State and factory tests of the ship are taking place in the military harbor of the Novorossiysk naval base and at sea ranges in the Black Sea.

Patrol ship "Pavel Derzhavin" is the third ship of Project 22160 and the second serial ship in a series of five units. The construction contract was signed in 2014, the entire series is intended for the Black Sea Fleet. The ship will join the formation of ships guarding the water area of ​​the Novorossiysk naval base of the Black Sea Fleet. The transfer of the ship to the fleet is planned by the end of 2020.

Recall that the construction of the entire series of these ships was delayed due to the import substitution of the power plant. All ships of the series, except for the head Vasily Bykov, on which the German MAN diesel gear units are installed, receive diesel gear units manufactured by the Kolomna plant.
Ctrl Enter
Noticed oshЫbku Highlight text and press. Ctrl + Enter
We are
Project 22160 corvette "Pavel Derzhavin" entered the factory sea trialsA summary of the events in the DNI and LC for the week 31.03.18 - 06.04.18 from voenkar Mag
Military Reviewin Yandex News
Military Reviewin Google News
82 comments
Information
Dear reader, to leave comments on the publication, you must to register.